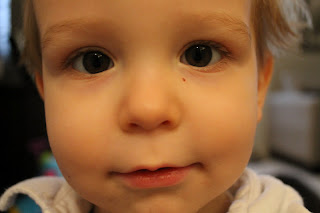 We are at 19 months now.  Philip is very busy doing all things boy.  One wet morning we went outside after a storm and he immediately started splashing in water puddles.  How do all kids know to do that?  He has started making sound effects with his cars - vroom, vroom!  I haven't mentioned this before, but Philip's absolute favorite toys are balls.  The first thing he pulls off the shelf each morning is a basket of balls.  When we leave the house he is often carrying at least one ball with him.  When we take a walk down the street, he is like a little magnet that runs to every ball he sees in people's front yards.  In other play news, he can now go down small slides all by himself.  He used to have a problem figuring out how to sit down and push off once he got up the ladder, but he mastered it this month.  Our neighbors have a small slide in their yard and he always makes a beeline for it as soon as we walk outside. 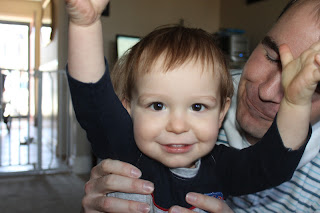 In an effort to help him learn more words, I started trying to get to weekly story time at a nearby library.  The one in our town is only once a month, and on a Saturday morning - we usually miss it because of schedules or just forgetting.  I found one that is really fun and takes place weekly.  The only problem - they limit the number of people in storytime and give out admission tickets.  You have to be standing at the library door as soon as it opens if you want a shot at the tickets.  It is pretty funny to be in a mad rush to get out the door for storytime tickets.  He is really starting to like it and pick up on some of the rhymes and songs that are repeated every week.  If he is bored or grumpy I can start to say one of the rhymes and he will jump in my lap to play. A favorite new game is Ring Around the Rosie. 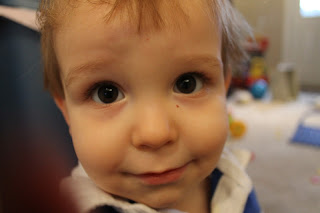 I learned the joys of the Toddler Tunes music channel this month.  I had only turned it on one time before, months ago, but decided to put it on one day when he was in a bad mood.  The music turns his attitude around almost immediately when he is grumpy.  It is amazing how those little songs really attract toddlers.  He could care less about most of the music Andy and I listen to, but if I put on a kids song, he starts smiling and dancing. 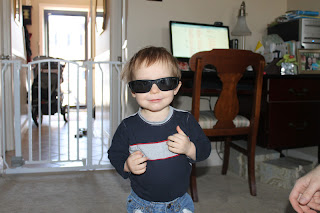 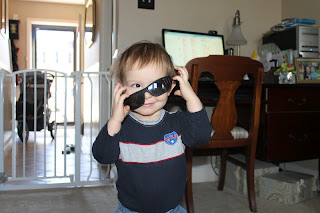 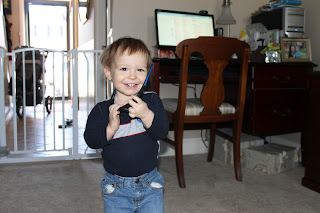 We started getting Philip to help clean up his toys in the evening.  He is pretty good at helping, but sometimes misses the point - like when he helped fill a basket up with blocks only to dump them all out again once he was done.  I also had him start picking up any food that he tosses on the floor during meals and putting it in the trashcan.  He loved doing it for about a week, but now I guess he figured out that it is a sort of punishment and he fights me on it. 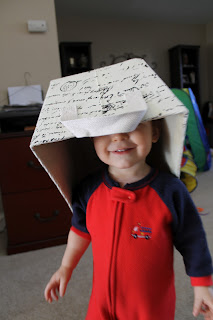 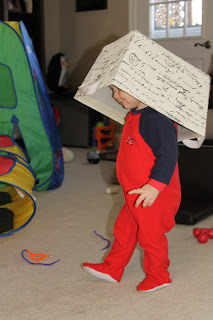 He is getting more picky with food now.  He used to love any fruit I put in front of him, but after having a cold, he suddenly got picky.  I think it may be a texture thing in some cases.  If I give him a grape, he will mash up the center and then spit out the skins.  He was doing this with blueberries for a while too - one of his favorite foods - but he has since decided it is best not to waste them!  Philip has started getting more interested in what we are drinking and throws fits if he doesn't get to have any (which he usually can't if it is something other than water). 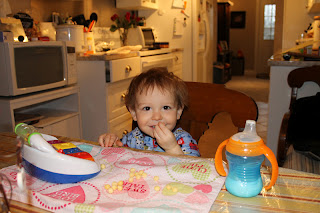 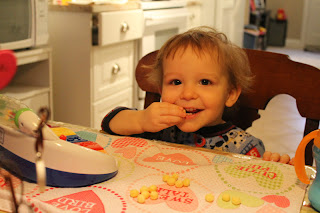 He is now able to easily climb onto our kitchen chairs and is constantly on them - yikes! Sometimes they are pushed all the way under the table and he gets his belly on top and then can't sit up.  He has decided that he wants to sit in a real chair for meals and snacks. I didn't expect him to give up the high chair so soon - or for him to be the one making the call on that - but it is time. We have a booster seat set up on one chair, but if he had it his way, he would sit in Daddy's chair all the time. 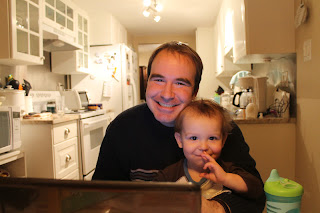 Philip loves to see pictures or videos of himself, and why not - he is especially adorable!  My blog is my homepage and if he is sitting on my lap when I get on the computer he usually starts laughing when he sees himself.  I scroll down the page to show him other pictures and he laughs and points.  He likes pictures of other kids too.  One morning at breakfast I was going through a batch of mail that included lots of kid-centric advertisements.  He smiled and laughed when he saw the ads.  I propped a couple up for him to look at while he ate and he was so happy looking at the pictures - so sweet!


Activity of the Month: