When Philip first started saying no, I thought it was kind of helpful.
Me: Do you want to read some books?
Philip: No

Well, okay, at least now I knew how he felt.

But after a couple days Andy said he thought that Philip was saying no in answer to any question.  I started observing.

Other times Philip's new word causes him to fib.


Andy:  Did you take a nap today?
Philip: No
(He took a three hour nap that day)

Me:  Are we sitting on the couch right now?
Philip:  Silence
Me:  Yes or no?
Philip: No
False.

Perhaps this is why Philip seems to ignore us when we tell him not to do something.  Instead of hearing "No," he probably thinks we are saying, "Yes, yes, yes!" 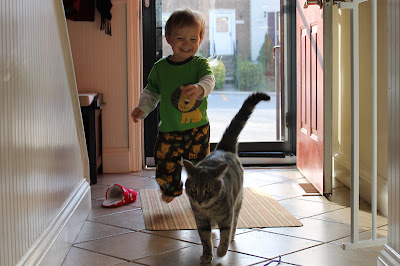