After spotting an ambulance on the road:
"Wait, is that the truck that has the band-aids?"

While digging in the dirt:
"I'm digging for golden!"

Talking about his swim instructor, Miss Jules.
"I think her first name is Miss."

Looking at the birds outside.
"The red ones are Cardinals. And the blue ones are called PJ's?"

Me: Miss Jules has an accent, I wonder what country she is from - maybe Australia.
Philip: Why would she teach here? Maybe she just wanted to go to another world to teach.

Looking at a cup full of carbonated beverage:
"And the bubbles are going up! Just like beer!"

While watching fireworks on TV:
"It looks like the whole world is on fire."
At the Natural History Museum, Philip was very interested in the exhibits about early humans. However, his reaction was: "They look disgusting."

Finding an animal hole in the sand on the beach:
"I think a fox lives in there."

Talking about how the baby will put his toys in her mouth.
"She will probably try to bite my spaceship, but it will be too hard for her, so she will just slime it."
"Did you know that Transformers are metal, Julia? Because Transformers are bigger than people. People are not metal. I know that because I'm the big guy."

Holding up a flashcard: "Exoskeleton"

"Ghostes (ghosts) are not real. Julia, I'll tell you what else is not real. Robots, dinosaurs, space, and monsters."
On a day we were going to the waterpark, I got ready with my hair pulled back, then sat on the couch to watch him play with his toys. Eventually he looked up at me and said:
"Mommy...is that you? You look different. I've never seen you look like that before.

Philip: I just saw an animal in the woods.
Me: Really? How cool! Do you know what kind of animal.
Philip: I'm not sure because it was far away. Maybe a reindeer...or a kangaroo.


"Do you remember the day our baby got married?" (baptized) 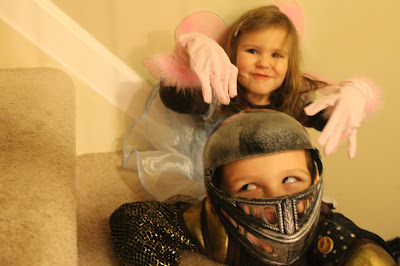