My in-laws came to town for about a week and half and among the many things they did for us, they babysat so we could have date nights!  We planned their trip to coincide with a concert Andy and I have had tickets to since before Philip was born.  At the time we thought, "He'll be 8 months, we will definitely be going out on our own by then."  Ha ha!  Eight months have passed by so quickly and with a clingy, stranger-scared baby, we had not been out on a date since a couple days before his birth.

The concert was planned for the last night of their visit, so we figured Philip would have plenty of time to warm up to his grandparents before we left him.  But my mother-in-law insisted that we go out to a movie just a couple nights after they arrived in town.  They had just seen The King's Speech and wanted us to see it while it was still in theaters.  Unfortunately, the showings were at 6:50 and 9:30, so we had a delima.  To go to the earlier showing and risk Philip being awake when we left, or go later and come home after midnight.  In proof of just how much we have changed since becoming parents, we decided 9:30 was too late to go out!

We had to be out the door at 6:20 in order to make the movie and thanks to an afternoon nap gone wrong, Philip was ready for bed around 6:00.  I put him down right at 6:20 and he didn't wake up until long after we returned home.  We felt so much better knowing he was asleep when we left.  Just to prove that we weren't the type of parents that rushed home as soon as possible on date night, we stopped at Starbucks for a drink after the movie.  However, we didn't have the nerve to sit and talk while we enjoyed our drinks - we got them to go!

On Friday night we went to a John Williams concert (the classical guitarist, not the composer).  It was such a great performance!  I was so exhausted during the day that I was scared classical music might put me right to sleep, but I pulled through (with a few nudges from Andy when I would close my eyes to appreciate the music).  Philip was still awake when we left and he did great, although we got varying reports from the grandparents.  Grandma said he did really well, but Grandpa said he put up a good fight!  Guess it is a matter of perspective.  I was happy to hear that Grandpa was able to hold him and put him to bed, as he was so busy during the week he didn't have a lot of baby time.  And Philip just loved his Grandma and wanted her to sit by him on the couch while Grandpa held him. 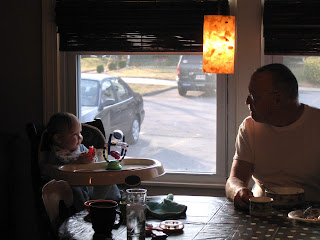 Breakfast with Grandpa (sorry for the bad lighting) 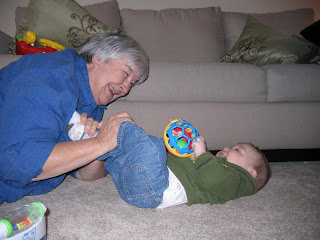 Play time with Grandma
More details about their trip soon!
Posted by Joy Complete at 9:18 PM