He started dancing!  He likes ride-on toys.  He started running and hiding from us - especially if he sees signs that a diaper change is coming.  Philip loves for us to chase him around the house calling out, "I'm gonna get you!" 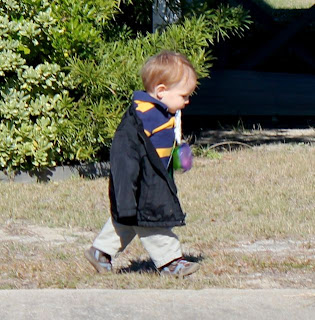 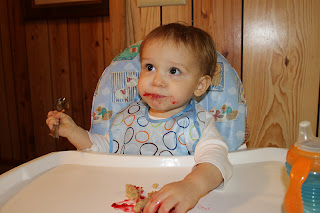 He has learned to slide off the couch and our bed using his feet first.  He loves romping around on our bed!  Philip is also starting to climb up the stairs using his feet part of the time (as opposed to climbing on his knees). 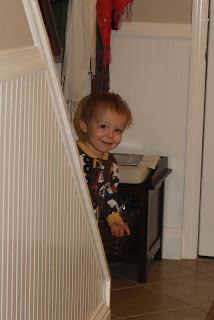 He kisses our cat and also a statue of the Holy Family.  Unfortunately, he observed Andy pet the cat using his foot one night.  His interpretation of petting the cat with your foot usually turns into almost stepping on the cat before one of us runs over to stop him. 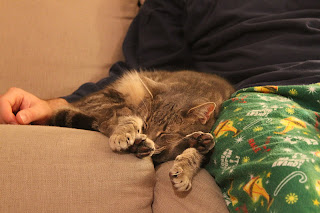 He is mooching our food which has greatly expanded his culinary horizons.  He has learned to enjoy a lot of new foods, but still loves his old favorites - bread, yogurt, fruit, and squeezie packs.  At meals, he likes to put things on top of each other and then try to eat them (like putting a vegetable on top of a piece of bread).  He also likes to use his spoon to feed himself.  Usually both of these actions involve the majority of the food falling on his tray before making it to his mouth, but he is still somewhat successful! 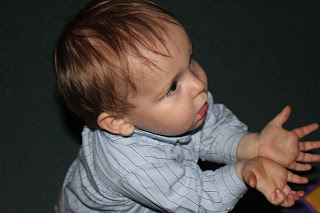 One of the biggest advancements over the past month or two is that he is getting much more independent at playgroups.  He used to cling to me for most of our visits, but now he is a lot quicker to run off and play on his own, or try to keep up with the big kids.  Luckily, he still checks in with me frequently, so I get lots of hugs when we are out!   He absolutely loves to watch big kids play - especially if they are running or playing with a ball.  Sometimes he tries to join in, but he is still a bit timid!  I love to hear him laugh as he watches the other kids play. 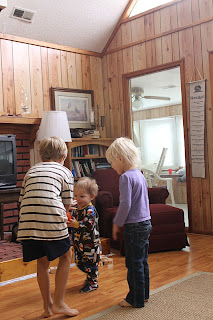 Playing ball with the big kids at the beach

Toy of the Month:  Who knew that a box of wipes could be so much fun! 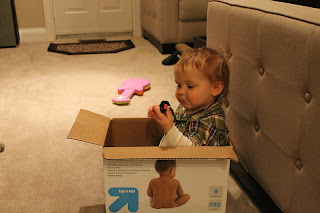 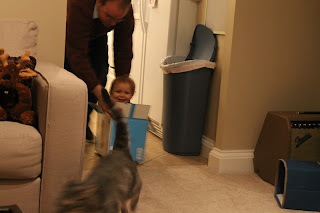 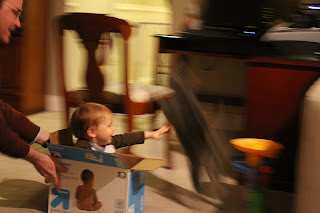 The cat also liked the box when it wasn't otherwise occupied! 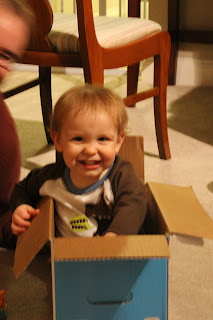 Mischief of the Month:  While trying to check in for a flight, I decided it would be okay to let Philip grab the cereal box off the kitchen table.  A couple minutes later, I heard "Whoosh" and I just knew what I would find when I turned around. 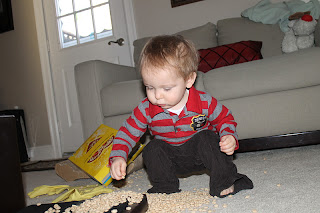 Luckily he helped clean up by dropping handfuls of cereal into his toy box!

A few favorites from the month: 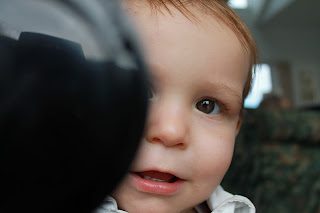 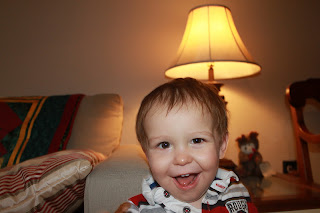 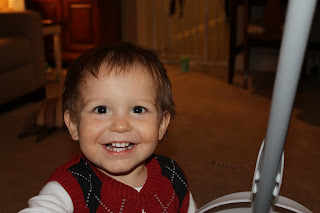