My little baby is already a year and a half!  Boy does time fly when you are having fun! 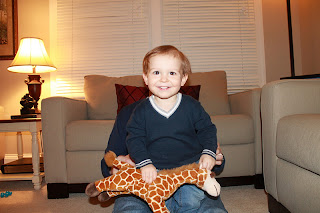 The giraffe is back for the half year shot -
much harder to get a good shot now that Philip is on the move!

Philip is talking a lot.  I call it turkey talk because he makes a lot of gobbling sounds!  We hear "uh-oh" around here a lot.  I'm working on trying sign language again and we've got "more" down.  Now trying to work on a sign for "all done" other than throwing food. 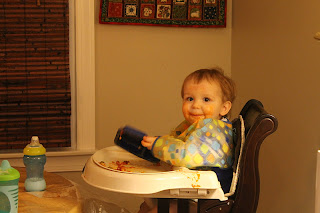 He got his second hair cut this month.  It was very traumatic even though he got to sit with me the whole time.  We made it out alive, but with his hair still kind of long.  The hair dresser was scared to touch him!  At least the back of his hair is straight now - it was a bit crooked after his first haircut, but considering what the hairdresser was working with, we just went with it.

Philip also got the last of his teeth, other than his two year molars.  Oh happy day!  The sooner we could get through the teething phase, the better as far as I'm concerned.

My little daredevil now wants to walk down the stairs front ways (as opposed to sliding down on his belly). This is no fun! It was especially hair-greying at Christmas when we were visiting houses that had no baby gates. Back at our house, he has been good about letting me carry him down the stairs and we just practice walking down our front stoop - only one step, so not too worrisome if he slips. 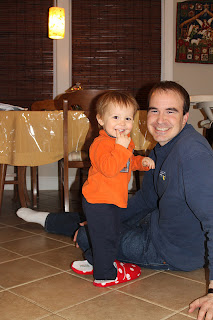 He decided to take a walk in my shoes... 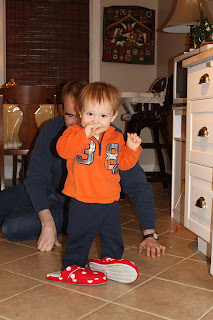 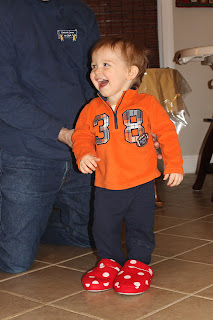 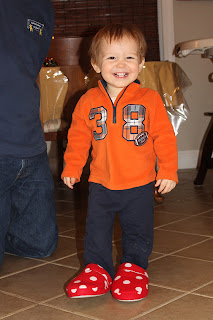 And he liked it!

He's learned a few other fun (for him) tricks this month.  Philip can now open a locked dishwasher.  He is tall enough to pull out the glasses from the top shelf of the dishwasher.  Talk about an accident waiting to happen!  When the dishwasher is running, he likes to push the buttons on it which has paused many washing cycles.  He is also tall enough to reach up and push the water and ice dispensers on our refrigerator door.  After having a toddler, I have brand new ideas of what I would look for when shopping for appliances!  One funny thing he is doing now is opening the dishwasher, pulling out an old sippy cup, and going to the refrigerator to fill it up with water.  No more wondering if he is thirsty!  He also stops whatever he is doing and runs over to help me fill up my cup anytime he hears the ice or water dispenser going. 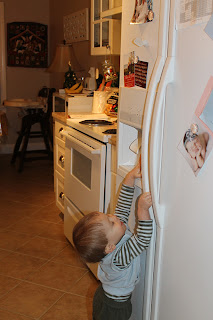 Mischief of the Month 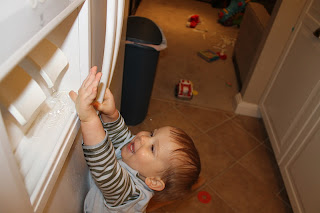 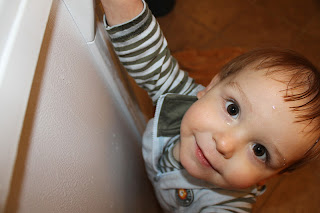 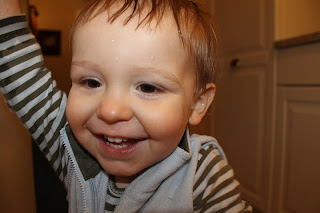 He went straight into the bath after this.

Philip is helping with a new chore - he is feeding Herbie.  He loves to get the cat's food dish for us to fill up each day.  Luckily he is not trying to bring us the water dish (yet).  He is so proud of himself.  After he puts the dish back in its place, he stands nearby pointing at it and telling me stuff in turkey talk.  Too funny! 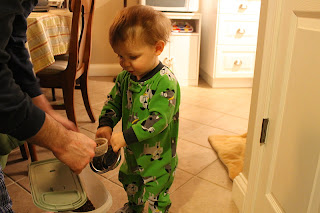 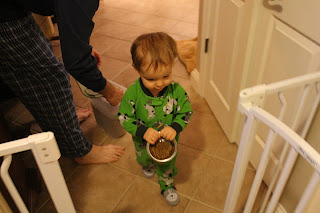 Sometimes he forgets to hold the dish level... 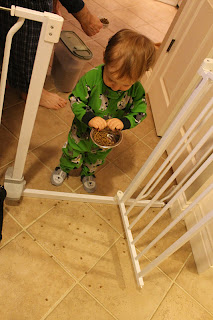 and this happens.
Posted by Joy Complete at 10:21 PM