My little boy is 21 months!  He took a lot of bigs steps this month. 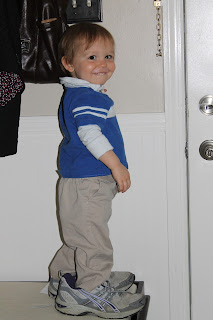 He put on my tennis shoes, jumped on the bench,
and started flipping the light switches on and off!

He is starting to give kisses to us when asked.  So sweet!  He waves to the cat and sometimes gives him a hug when we are out the door in the morning.  He picked up a few new words.  My favorite word that he learned is Happy!  It is part of a song that is on the boombox he got from his grandparents for Christmas.  Every once in a while when he is playing on his own, he turns on his boombox.  He doesn't sing any part of the song except the word Happy.  What a joy to hear!  He also learned to say Ball and often sounds like he is saying "I don't know." He loves to sing and carry the crucifix. 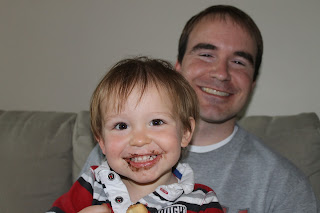 He weaned this month with some encouragement from me.  I am amazed we nursed so long - I just wanted to get to 12 months!  I was hoping to have him weaned halfway through my pregnancy, and just when I thought there was no way it would happen, he decided he was done!  Nursing has been replaced by books.  He loves his storytimes before naps and bedtimes.  He will get hooked on certain books for a while, but just because something is his favorite one week, doesn't mean he will like it the next.  When I start reading a book he doesn't want to hear, or even singing him a lullabye that he isn't interested in, he will wave his hand back and forth and say, "No, no." I never expected him to dictate what songs I sang to him! 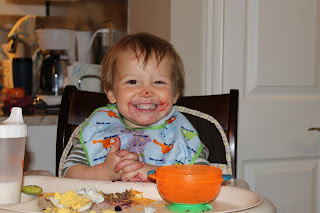 I'm in charge around here!

We go on lots of long meandering walks.  He loves to chase birds and the bunny rabbits that hang out around our house.  We spent a lot of time at home this month while we had some repairs done on our basement. Other than one or two "I'm bored" days, he did a really good job of playing happily at home. Amazingly, he did really well with having strangers coming in and out of our house for three weeks and hearing all sorts of strange noises coming from our basement.  Our little boy is getting bigger and braver each day! 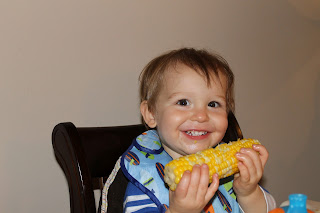 Corn on the Cob - a new favorite 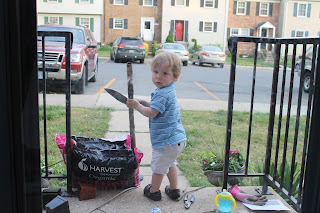 Time for some spring planting

Mischief of the Month: 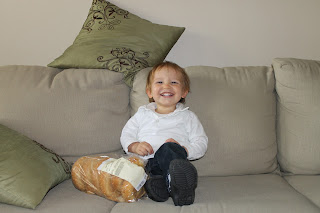 He stole a bag of bagels when I was unloading the groceries, ran into the living room with them, and sat on the couch.  He bit through the bag and ate a good hunk out of them.  This is now his go-to spot when he "steals" food.
Posted by Joy Complete at 10:28 PM