Our little man is adjusting so beautifully to being a big brother. I wanted to jot down a few things about his transition while they are still fresh in my mind. 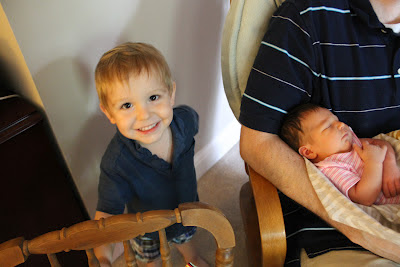 A couple months before Julia was born, I borrowed some books from the library that I hoped would help him understand what it would be like to have a baby in the house.  He wasn't interested in them at first, but a couple weeks before her due date, he started to request them.  Even now, when we do story time, he requests his favorite "baby" book.  The books and our talks with him seem to have done their job. Philip has taken everything in stride and hasn't seemed surprised by all the changes going on. 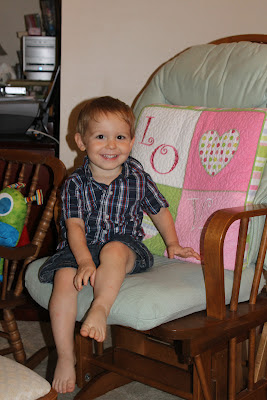 I mentioned in past posts that a couple months ago, Philip had gotten really clingy and wanted us to be with him all the time when he was playing.  I was worried that this phase would last and cause some problems when the baby was born.  The week before Julia was born, I realized that he had been playing a lot more independently in recent weeks while I was busy nesting.  Just in the nick of time, he worked through the clingy phase and he has been really good about entertaining himself quite a bit throughout the day. 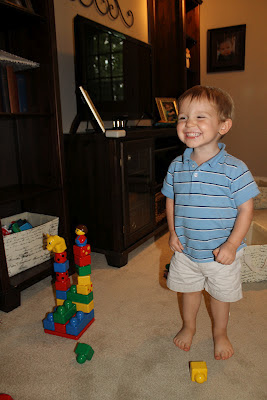 Proud of his block towers

Since we live far away from family, one of the advantages of having a scheduled c-section was that my parents were able to be in town to take care of Philip while we were in the hospital.  They had so much fun together and it put us at ease knowing that Philip was able to stay at home in his element while so many changes were going on around him.  We loved getting updates about what he was saying and doing throughout the day and were impressed with how well-behaved he was for his grandparents.  I'm so glad they got this special time together. 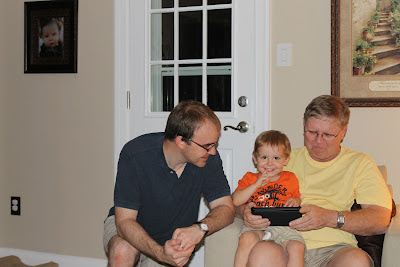 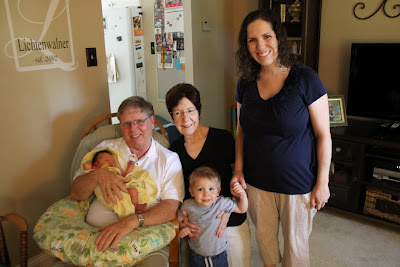 Last morning with Grandma and Grandpa

Philip visited us at the hospital each day, but was quite scared by the hospital bed, so he mostly avoided me.  His initial reaction to the baby was one of aloofness.  He was slightly interested in her, but mainly just wanted to play.  Once he realized there was a trail and a fish pond around the hospital to explore, he never really wanted to be in the hospital room. 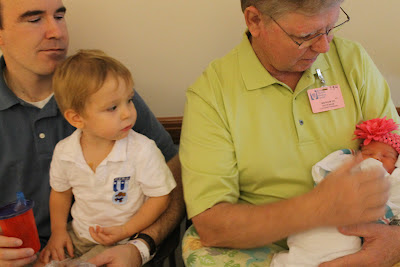 At home, thing are pretty similar.  He is so busy playing that he doesn't focus much on the baby.  He is sure to give her a kiss before going to bed each night, though  I'm sure part of what has made things so smooth is that Andy has a very generous paternity leave benefit and was able to stay home with us for the first three weeks.  Philip and Andy bonded even more than ever and Philip was able to keep getting lots of one-on-one attention.  Andy returned to work this week, but his parents arrived the same day, so there are still lots of loving people around to give him extra attention. 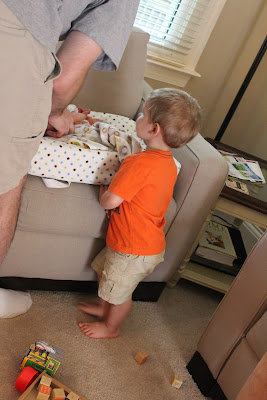 Diaper changes were interesting at first - now they are old news

Philip still loves to play crossbearer.  Andy found a DVD of the Latin Mass that he had received at an event and opened it one day.  Now Philip begs for us to turn on "church" so that he can watch and practice being an altar server.  We figure at least if he is watching TV, he is getting something wholesome! 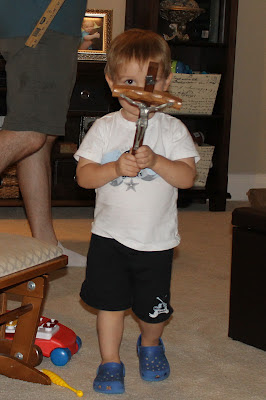 His language development has really exploded and we are amazed to hear him pick up multiple new words each day.  Sometimes we hear him babbling and in the midst of gibberish, we hear, "baby."  We are curious about what he is saying about the baby, but it all seems good!

We are so thankful that things have gone so smoothly thus far.  Here's hoping that this lasts! 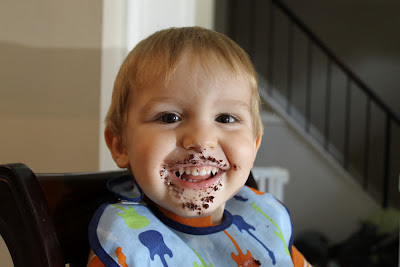 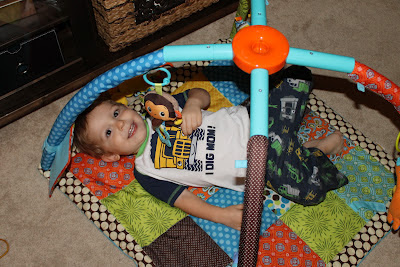 Getting reacquainted with his old friends 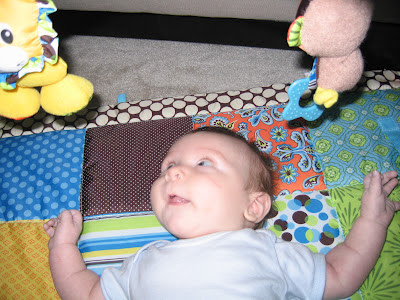 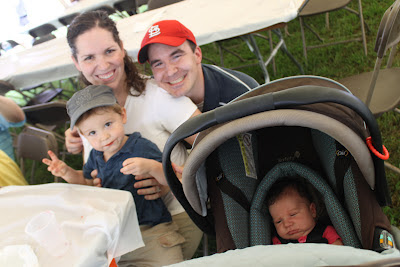 Here is the whole family at a Labor Day picnic this week
Posted by Joy Complete at 11:26 PM