Two weekends ago we flew to Texas for two very special occasions.  My sister's baby, Hattie, was baptized and her oldest daughter, Olivia, celebrated her third birthday!  This was our first time meeting Hattie and she was such a cutie sweetie.

We flew down on a Thursday.  It was Julia's first flight and Philip's first time in a seat by himself.  They both did pretty well even though we sat on the plane for almost an hour before taking off.  Philip had run through almost all of his surprise treats (new books, stickers, a lollipop) before we even took off. About an hour before landing we were all wishing the flight had left on time, but we made it through. Sorry, no plane or airport photos this time.  We were a bit preoccupied

We drove to my sister's house and enjoyed dinner from one of our favorite local places, Freddies. Afterwards Olivia grabbed Philip by the hand to show him her room. She first opened her toy box and then she went over to a little box full of her new big girl princess panties. She held up each one and told him which princess was on it and then tried to give him one to hold.  My little boy just stood there with a blank look on his face. 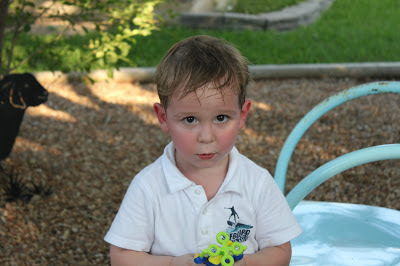 The next morning we got up and took the kiddos to a Children's Museum followed by lunch at another Texas favorite, Taco Cabana. We came home for "naps" and then my parents arrived. The kids had a great time playing with bubbles that evening in the backyard. Uncle Tim arrived home from work as did his parents and we enjoyed an evening with our families. 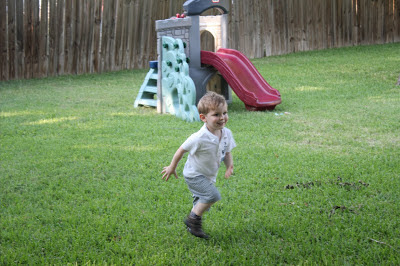 The next morning was Hattie's baptism.  Such a beautiful little angel baby. 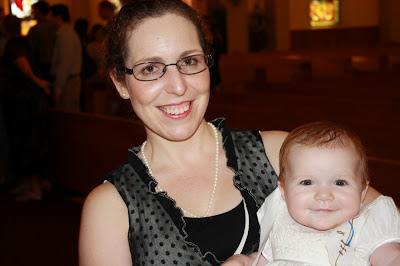 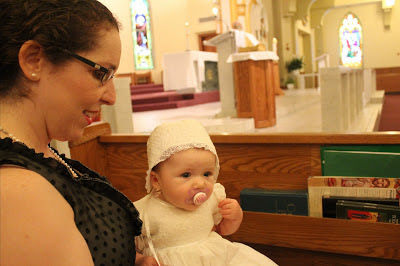 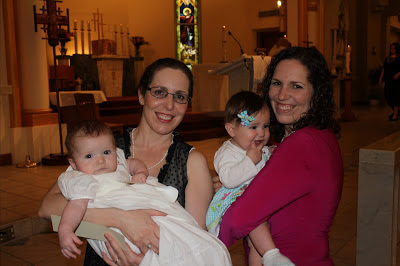 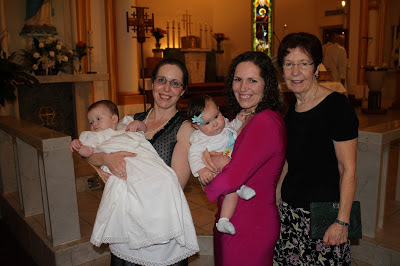 These two look innocent enough, right?
Afterwards we enjoyed a lunch at my sister's and the kids played in Olivia's new swimming pool.  Hours and hours of fun. 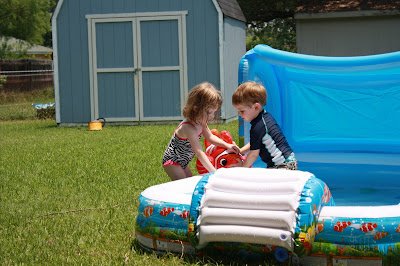 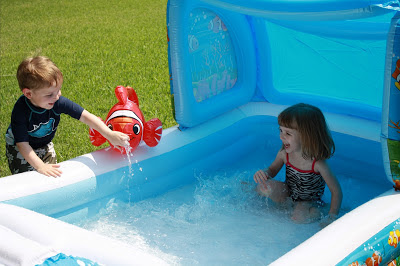 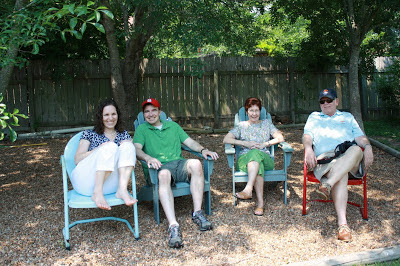 What the rest of us did
The next morning we all went to Mass. Philip got the award for worst-behaved and Hattie was the best, of course, being fresh off a baptism. 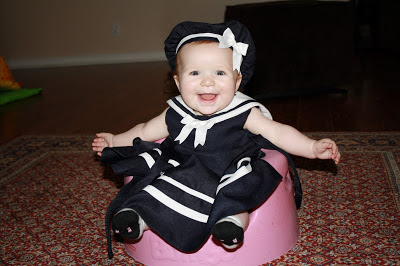 In the afternoon we went to Olivia's birthday party at a bounce house place. They had lots of other fun things to do there as well. It was a great time! 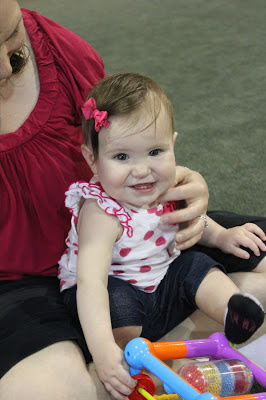 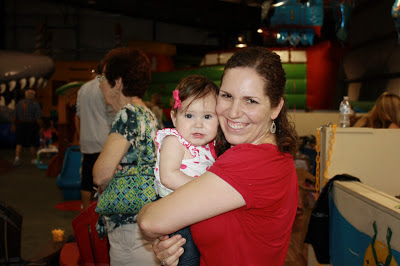 Back at home Olivia opened her presents and the kids had fun playing with all the new stuff. That night we found out that Philip had just learned Andy and I's first names.  We were outside playing when he stopped, got a mischievous smile on his face, and said, "Kristen. Kristen. Kristen, Andy." 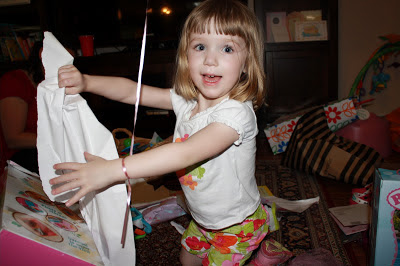 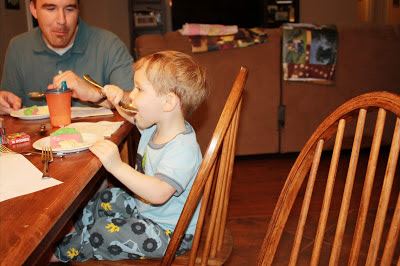 Philip picked the biggest spoon in the house to use for dessert
On our last night the little ones had a blast running around with party balloons. It reminded me of the kids running laps around our house a year ago when Olivia was in town for Andy's graduation. 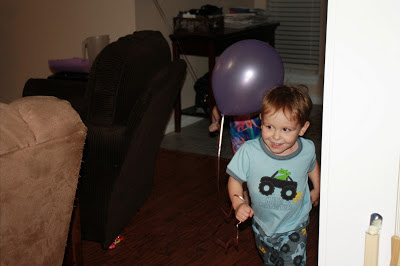 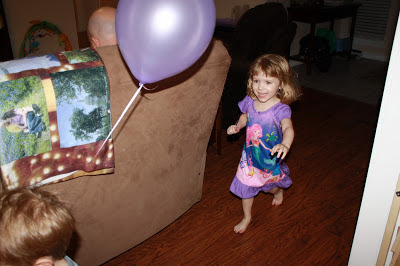 All the fun ended when we said the balloons had to go away for the night. The drama was incredible as they played off of one another. I'm not sure how people with twins do it! 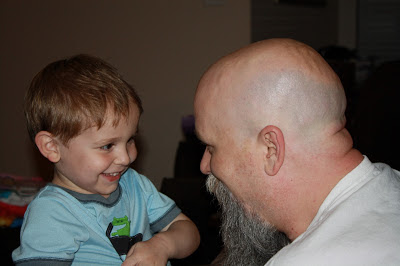 Getting some advice from Uncle Tim on his last night
We spent one last morning together and then headed off to the airport. 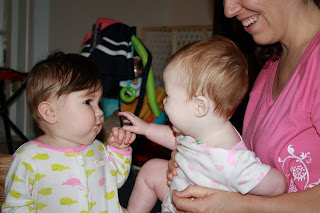 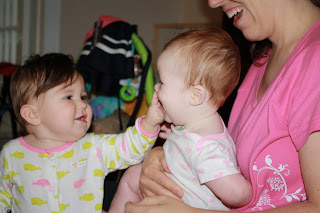 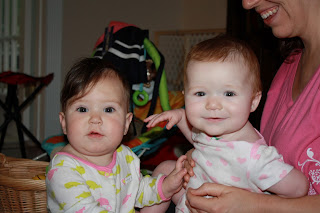 The kids did amazing on the return flight. I think Philip really wore himself out. He has been sleeping in every day since we returned. I am loving it!

Two favorite Olivia quotes:
To Andy while trying to mooch food: I think I love you.
To Julia: You're my best friend ever!

Favorite Philip travel quotes:
In the car on the way to the airport: I ready a check my nuggage now!

On the rental car shuttle back to the airport: We gonna have a be real pashion (patient).

We never got a picture of the four kids together - they were never awake and happy at the same time. This is the best picture we got of our families together. 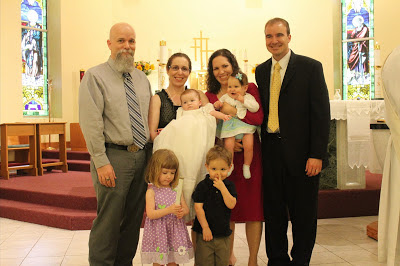 Having examined this picture closely, I can assure you
that my son is scratching his nose - not picking it!
Posted by Joy Complete at 9:39 AM