A couple weeks ago I saw that the Basilica would be hosting the relics of St. John Bosco this Tuesday.   The relic is journeying to 130 nations in preparation for the 2015 celebration of the 200th Anniversary of Don Bosco’s birth near Turin, Italy on August 16, 1815.  I have always been a fan of Don Bosco, so I was hoping to make a trip.  Since we hadn't brought Philip to Andy's office for a visit yet, I decided we should go on Tuesday (Andy's second to last day of paternity leave).  So this past Tuesday, we visited the office and then went over to the basilica for veneration of St. John Bosco's relics. 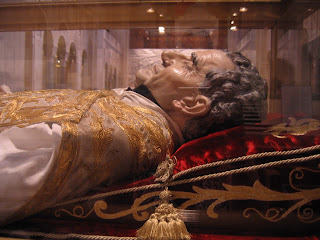 While there, we said some special prayers for our little boy and also for ourselves that we may live well our vocation as his parents.  We also prayed for our godchildren, our parents (with a special intention for Grandma Susan who has a special devotion to St. John Bosco), and several other personal intentions.
Here is Andy venerating the relic while holding Philip: 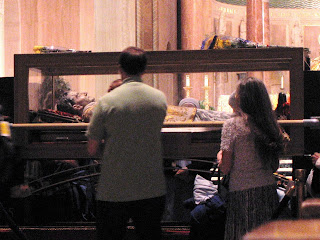 Salesian Code of Arms and a Don Bosco quote: 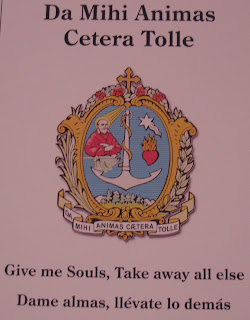 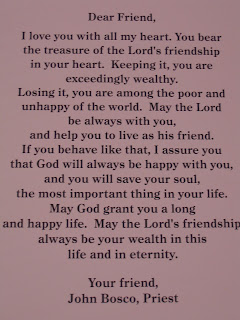 Before going to the Basilica, we spent a couple hours visiting Andy's office.  Philip was a huge hit with everyone from the senior staff to the lunch ladies!  We had a 50/50 split on opinions about whether he looked like me or Andy.  Even after spending a couple hours there, we still didn't visit everyone we had hoped to, so I guess we'll have to go back again some other time.  Here are Philip and Andy in his office (they matched that day): 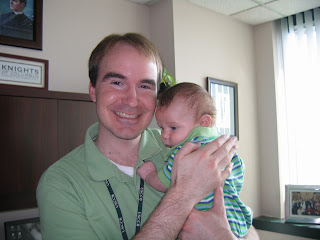 A sign Andy's supervisor had made after Philip was born.  Apparently this was hanging in the hallway outside of his office while Andy was home with me and then they moved it into his office before he returned to work. 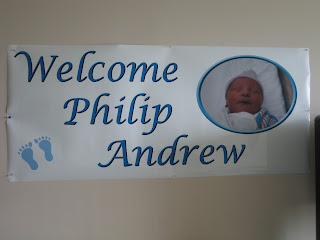 Have a great weekend everyone!
Posted by Joy Complete at 11:22 PM