A Mouse in the House and a Racoon on the Porch

Yes, you read that title correctly, these were a few of our most exciting experiences after becoming homeowners in December.  Luckily these surprises have been pretty easy and cheap to manage.

We moved in late December and just love our new home.  Sorry for the lack of pictures.  There is at least one thing missing from each room and I am trying to get the rooms complete before posting pictures.  Luckily, there should be some up in the next week or so.


Here is one pic you can see: 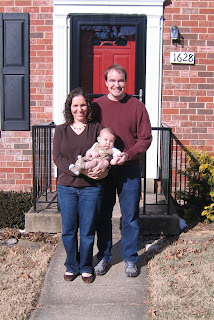 It doesn't show much, but you get the idea of the outside of our house.  Here are our home's stats:
- 3 level townhome with finished basement
-3 bedrooms
-4 baths (2 full, 2 half)
-large deck and patio
It is an older home, but has been remodeled.  We were looking for a place that was move-in ready and we found it.  In fact, we did just that!  We had closed on a Thursday so that we would have time to do any cleaning or quick paint touch-ups before moving in that weekend, but circumstances worked against us.  Between me having to go into the office, Andy and Philip getting sick, a long doctor's appointment, and a snowstorm, we didn't get a chance to get back to the house until we were literally moving in.  We didn't even get to go to the house together.  On move-in morning, Andy stayed at the apartment to supervise the movers while I brought Philip to the house.  As I pulled into the parking lot with my baby and the cat in the backseat, I thought that this was not how I pictured arriving at my new home for the first time - it didn't seem right to walk in for the first time without Andy.  Don't worry, I got over it quickly!
Since then we have been in the process of unpacking, figuring out where things should go, and my favorite - decorating!  My parents came up in early January and helped so much.  Mom cooked, cleaned , and helped with the baby, while Dad spakeled; painted; installed door bumpers, toilet paper and towel holders; and hung pictures; among taking many trips to Lowes and I'm sure a number of other projects I have since forgotten.  If only they lived nearby!
Here is one of the big accomplishments of the week. 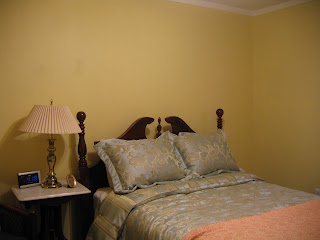 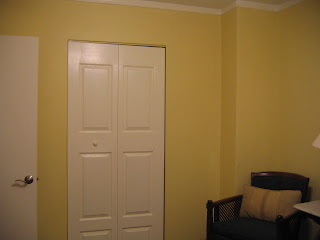 Guest room after
No more purple door and no more ugly wall color (it looked worse in real life than it does in the picture)!  Thanks Mom and Dad!  It literally would have taken us months to get these project done without you.  Come on up anytime! 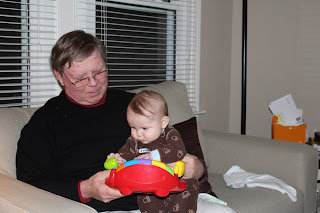 Now getting on to the title of the post, we have already dealt with a few little rascals around here.  One morning Andy awoke to find trash strewn across our deck and raccoon tracks in the snow.  We do have a critter-proof garbage can, but someone (me) didn't put the lid on correctly.  It is pretty much impossible to close the lid when you are only using one hand, and I pretty much do everything one-handed these days.  I have left the trash job to Andy since then.  So far, so good, although we do still see raccoon tracks on the deck anytime it snows, so we know he is still on the prowl.
While my parents were in town, we started to hear some scratching in the wall of our living room.  It was so gross to hear that little guy scratching around in there.  The cat was on high alert, keeping guard of the wall, and I wondered if he would come up to bed at night since rodents are nocturnal, but he did leave his post in favor of the nice warm fluffy bed upstairs.  Andy figured out that he was somewhere in our under-the-stairs storage closet.  We got some no-kill traps and set them up. Unfortunately, Andy waited too long before checking the traps and the mouse ate his way out of the first one!  We didn't make the same mistake a second time.  Andy kept saying that it might be a rat, but when we caught him a second time and Andy brought him out to the woods, out of the trap backed an teeny brown mouse.  According to Andy he was a cute little fellow and a bit confused about why he was all of a sudden out in the rain.  It has been a few weeks since, and so far no new mice.  Hopefully it will stay that way!
Posted by Joy Complete at 10:48 PM