It is official.  Philip is starting to say Mama!  Yippy!  Is it bad that he mainly does it when he is upset?  Must be because I am such a great comforter!

We have a rule in our house that if Philip wakes up before Andy goes to bed for the night, he is the first responder.  In the past, Philip would often cry while he looked back and forth between the door and the rocking chair where I usually sit with him.  Andy said he started to notice Philip making Mama sounds a while back, but it has become really clear this week.  I wondered if Andy was conspiring to get me out of bed by telling me that Philip was calling out to me, but last night I definitely heard it clearly.

He is also quick to cry "Mamaaaa" if I take something away from him that he shouldn't be playing with, or close a door that he wants open (usually the refrigerator or pantry).  Is this an early form of talking back?  For now I am encouraging it, giving him big hugs and praising him anytime I hear him say my name! 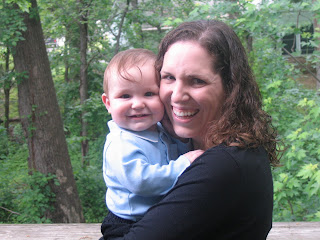