The current state of our basement: 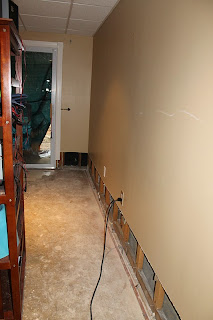 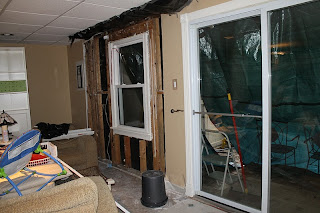 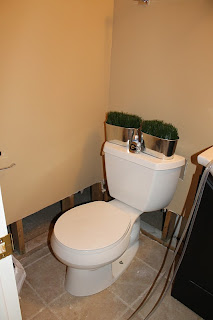 We had our first adventure in homeownership last week.  Our area had massive storms for one week straight.  I just heard that the Weather Channel is calling what hit our area a once-in-a-millenium storm.  Great.

We found out after Hurricane Irene  that we had a leak in the sliding glass door of our basement family room.  We were in the midst of getting recommendations for contractors when the next tropical storm came through.  Around 11:00 pm last Wednesday night, it all came to a head as our basement got flooded.  A huge thundestorm came through and Andy went to check out the sliding glass door area.  We definitely had issues and he had set up an intricate contraption to catch the leaking rain.  Then he went into our laundry room and found that one of our window wells was filling up like a fish tank.  He went out in the midst of thunder and lightening to bail it out.  It started filling up quickly again and he headed back out to bail water.  By that time, this was happening: 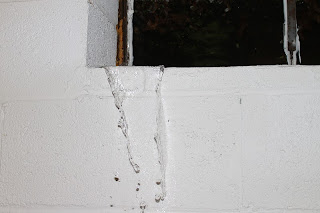 As if that weren't bad enough, the window soon broke and water rushed in.  Our laundry room had about an inch of water in some places and it quickly leaked into the bathroom hallway, and edges of the family room.  We also found that the window in the family room was leaking.  A water bubble got trapped under the paint and made its way from the ceiling all the way to the floor. 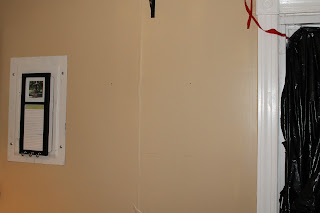 We called a flood damage company, but since it was still raining hard and water was getting in, they said it would do no good for them to come out yet.  We were up most of the night moving all of our valuables upstairs.  The next day, the flood company came out to rip up the carpets and set up dryers and a dehumdifier.  Last weekend they came to cut out the bottom 12 inches of drywall and all the molding.  They also dropped off Big Bertha, a huge dehumidifier. 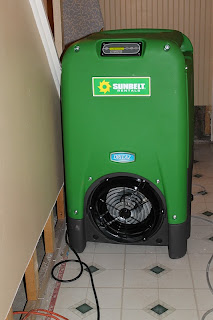 Andy thinks this linoleum in the hallway is awesome. I disagree - it is going!

When they told us all the walls had to come out, we were literally expecting to go downstairs to see no walls in the basement, so it was almost a pleasant surprise to find that they only cut out the bottom foot of drywall.


Oh and while they were checking out the damage, they found some pre-existing mold which is not covered by insurance.  Right now, we are still waiting on an insurance agent to come out for an inspection before we can move forward with repairing the damages.  We are praying that they will be covering most of this!  Today the flood company is supposed to come out for an inspection and hopefully they will find that we are sufficiently dried out so they can remove the dehumidifiers.

What an adventure, and there is much more ahead!
Posted by Joy Complete at 1:33 PM