My little buddy is 20 months old now.  He is so much fun to be around!  I just love one year olds and how cute they are walking around like little people.  I love how everything is new and exciting for them. 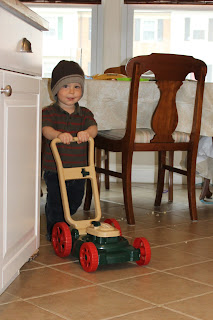 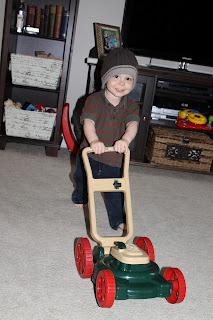 He had to wear Andy's hat

Philip is really into shoes right now.  He likes to walk around in ours as well as take off our shoes and put on new ones.  I tell him he would be a good shoe salesman. Sometimes I think he is telling me that he is ready to go outside - like when he takes off my slippers and tries to put on flip flops - half the time he tries to put Andy's shoes on me.  He is really obsessed with his Crocs.  I bought him a pair to wear on our deck last summer when he was first learning to walk.  He found them this month and wants to wear them all the time.  I think he likes them so much because he can actually put them on and take them off by himself - and most of the time he gets them on the right foot too!  His favorite outfit this month was a diaper and Crocs - too cute! 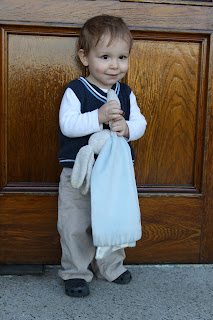 I can dress him up, but I can't get him out of his Crocs!

He has really gotten into blocks and cars this month.  He is also working on puzzles more, but they tend to frustrate him. 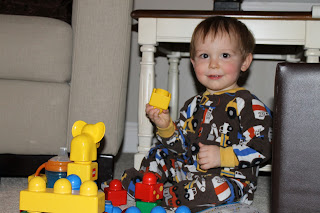 He plays with his Duplos a lot

He has started taking me by the hand and leading me places. I love to see where he wants me to go. 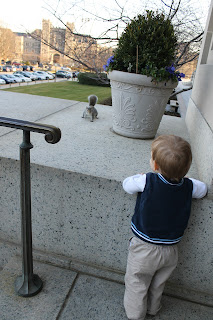 New words include Din Din (dinner) and Bunny.  He gets really excited when we tell him it is time for din din and he goes running to his seat - sometimes even willingly coming inside when he is playing outside.  Hopefully he will continue to like my cooking! 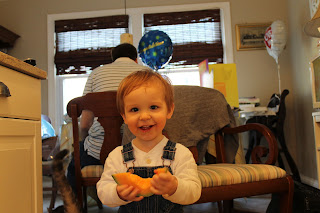 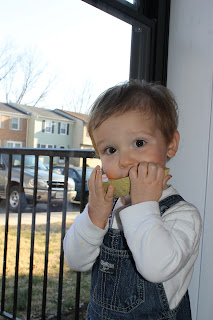 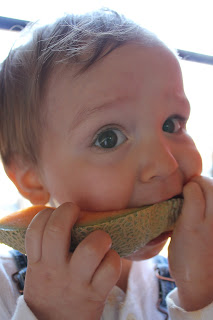 He is not able to say the letter "B" yet, so he usually says "Unny" when talking about a bunny and "Anana" when he sees a banana. 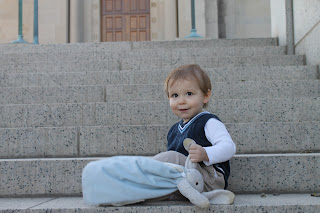 This little boy loves his Bunny 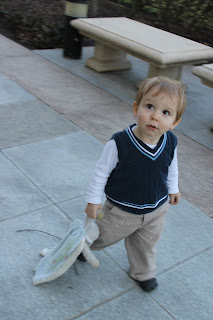 When we ask him what a dog says he starts panting.  He also blows when we say the word "hot." He learned that from all the times we told him his food was hot and blew on it for him.  It is funny when I am using the word hot in a sentence (ex. "It is hot out today.") and he starts blowing. 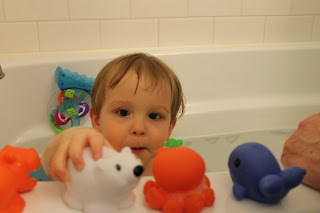 I think Philip is developing a fear of heights.  When I take him to the playground and he gets to the top of the steps, he will sometimes just go right back down or he will want me to hold him.  He also sometimes looks frightened when he is at the top of our stairs at home and freaks out until I pick him up.  Other times he is happy to walk down stairs with my help.  Hopefully this is just a phase! 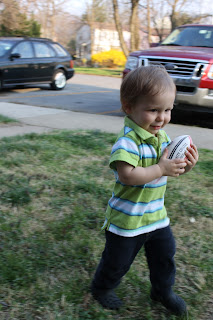 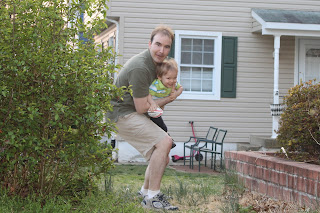 Now that Andy is done with his degree, we are having a lot more weekends like this!
Posted by Joy Complete at 4:48 PM