Happy Easter everyone!  Did you know that the Easter season lasts 50 days - 10 days longer than Lent!  It ends on May 27 this year - Pentecost.  We put up our Easter decor on Holy Saturday evening and try to keep it up the full 50 days - long after the stores have moved on to 4th of July!

We had a great Holy Week and Easter filled with visitors.  Andy's sister and her family came to visit us at the beginning of Holy Week.  Philip had a blast with his four cousins and they had just as much fun playing with him.  Philip even gave his first spontaneous hugs to one of his cousins - the first one given to anyone other than Andy and I.  I actually didn't take any pictures of their visit because my sister-in-law and niece always had camera in hand.  Hopefully I will be able to share some pics once I receive them - probably in a week or so.  At any rate, we did some touring of DC and Annapolis and had fun hanging out at home as well.  Their trip gave us an idea of what life is like when you have four kids (five including our little guy) - it is definitely a lot noisier and bustling than having just one! 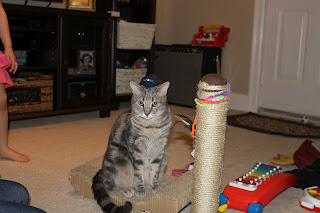 The poor cat had two little girls that were constantly chasing after him and trying to hold him.  If he thought life with Philip was hard, he now knows how lucky he is. 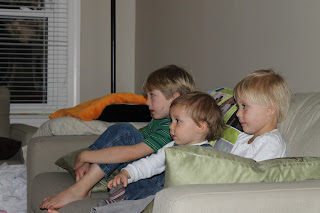 Philip's first time watching Looney Tunes.  He is a fan! 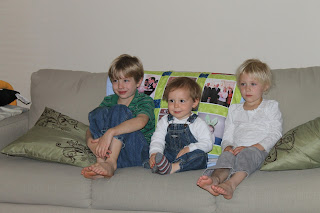 My favorite questions from the visit:
1. Have you had your baby yet?
2. Nephew: Do you have an apple?
Me: Sure, we have some in the fridge.  Would you like one?
Nephew:  No, do you have an Ipod or something I can play Angry Birds on?

And as has happened with at least three out of their four kids, the youngest at one point got mixed up and thought Andy was my Dad!

On Friday, Andy's brother and sister-in-law came.  We were honored to have them visit, especially since it was their 10th wedding anniversary!  It fell on Good Friday, so we kept the celebration light for the evening, but we took them out to dinner the next night.  We also had fun decorating their room with wedding decorations, flowers, champagne, and chocolate. 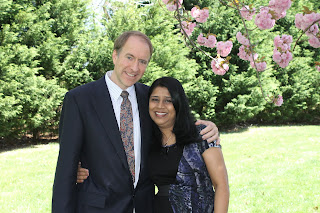 We put the guys to work on home improvement projects and my sister-in-law and I did some cooking.  We also enjoyed a picnic and playtime at a local park.  It was a lot of fun to be together and to share Easter.  For Easter dinner I made a pork tenderloin, rice with asparagus and cashews, and shredded carrots.  Dessert was a super easy and delicious blueberries and cream pie.

Philip had a great Easter!  His basket was filled with snacks, a book, bubble bath, a toy boat, a pinwheel, spoons (I love that you can give one-year-olds stuff like this and they are happy), and bunny ears (which he won't keep on his head long enough for a picture). We've had eggs laying around the house for a couple weeks now, so on Easter morning he didn't realize there were treats inside.  He just did what he always does - threw them! 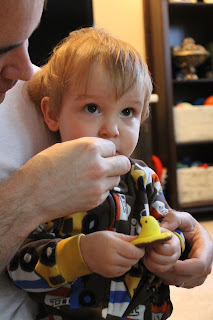 He wasn't sure what to do with a Peep
until Andy broke off a piece and fed it to him. 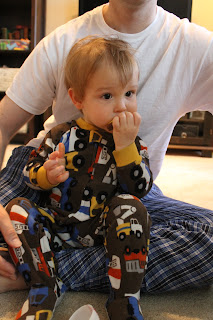 Didn't take long for him to figure it out from there! 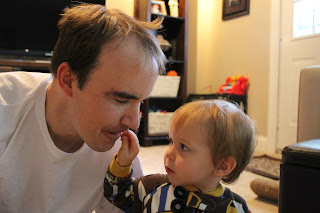 Feeding Andy one of his treats.
I got made fun of for filling his eggs with the same stuff he gets every day -
puffs, yogurt melts, Goldfish, and freeze dried fruits! 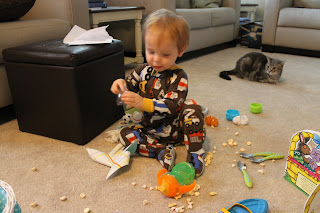 About 20 minutes after discovering his basket.

After Mass we tried to get a family photo.

Philip had his own idea of what he wanted to do: 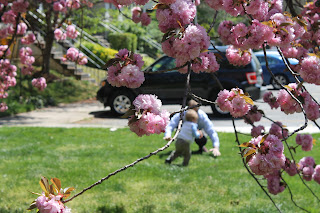 When we finally wrangled him for a picture, this is what it looked like: 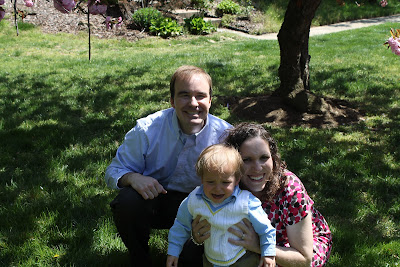 Our best shot of the day: 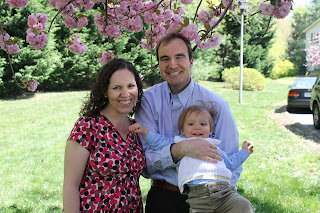 Andy took Philip inside to get changed and this is how he came back looking: 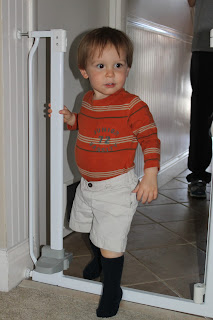 Hope everyone has a Happy Easter season!
Posted by Joy Complete at 6:08 PM