This may be my last monthly status update for a while.  Things are about to get crazy around here! 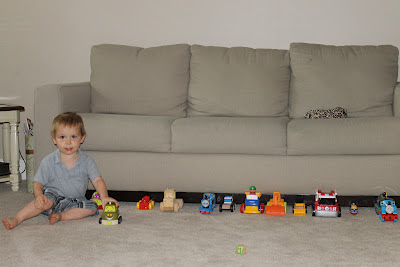 Lining up cars for a race!

In his last month of being one, Philip really advanced in language development.  Some new words include I love you, I ready, side (in or outside, depending on where we are not), please, and thank you.  He also commands us to sit very often.  "Sit, sit," he says, while patting on the floor next to him. It can be a good reminder to stop all my running around and enjoy some time playing with him.  Anytime he hears a phone ring - even if we are out at a store, he says, Hello.  He still isn't saying yes, but has started nodding his head and saying mmm hmm, mmm hmm for yes.  Saying mmmm no, also means yes, but a direct no still means no.  Got it? 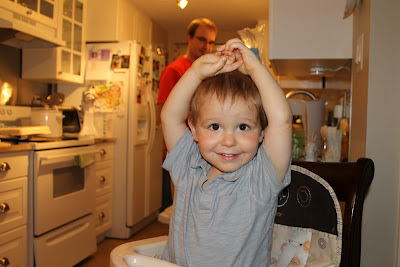 A new favorite phrase is, What is that? When he first started saying this, I felt bad thinking that I had not been animating our days and surroundings very well.  He was curious about so many things!  I have since gotten over that - sometimes he just gets into a What is that? mood and he asks it about anything he sees, even if it is something he already knows.


Exhibit A:  I have four minutes taped of the What is That game (short clip here),
and it didn't stop after the four minutes.

He loves to sing and we have been able to pick up some of the songs he knows by heart.  He doesn't say the words, but he sings the tune to Twinkle Twinkle (knows a couple words for this one), ABC, Old McDonald, Braham's Lullabye, Frere Jacques, Immaculate Mary, and the Happy Little Monkey's Song. 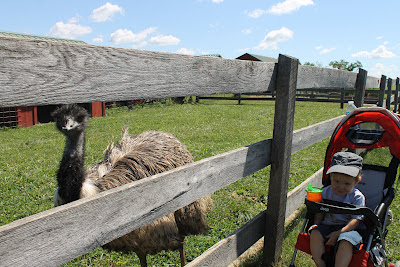 We went to a petting zoo this month - he had a blast!

It is funny how quickly habits form.  One day when we were out shopping, I picked up a cute hat and put it on his head to see how it looked.  Philip decided he loved the hat and wore it through the whole store, and of course I bought it for him.  Now every time we go to leave the house, he says, hat, hat until I grab it and put it on his head. 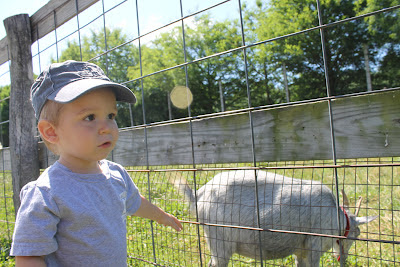 Here is the hat

Another day, we were playing in the basement and Andy and I were both tired, so we laid down on the floor.  Philip thought that was really fun and came and laid beside us.  Now before we put him in bed every night, he wants us to all lay down together for a few minutes (he would prefer longer than a few minutes, but we have to get out of the room sometime!).  At bedtime he also wants me to put one of his stuffed bunnies on his back like a blanket, all because I did it one time. 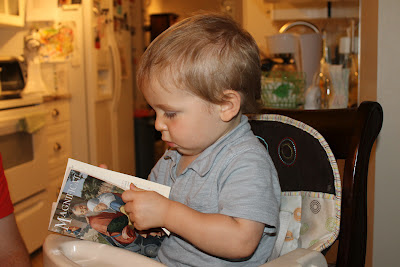 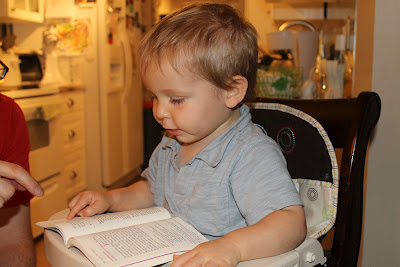 Unabashed plug for the Magnificat

He is starting to want to bring all sorts of things into bed with him now.  We limit him to only soft, stuffed items, but sometimes the crib is so full of stuffed animals, it is hard to find him!  His love for stuffed animals just began recently - we have had a basket of them sitting in his room since he was born and he never paid much attention.  Now he loves to cuddle, kiss, and play with them. 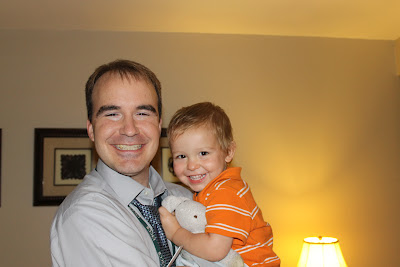 He is also starting to get more interested in coloring and playing with stickers.  He never knew what to do with stickers before and would always just hand them to me if someone gave him one.  Coloring now lasts a few minutes at a time instead of about 30 seconds!  However, he prefers to make trains out of his crayons. 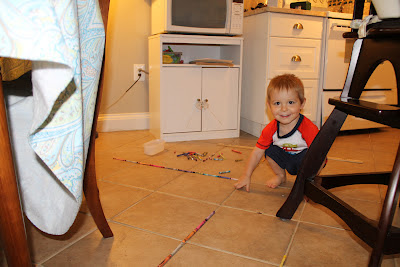 This a big video month.  I wanted to capture him saying some of his new words - it is so fun to hear how he pronounces things.

Here are some of his most recent words:

Here he is saying his holy words:

And here he is watching the first video of himself. He thinks it is hilarious that he sneezed - priceless!