This is an exciting week for the church.  With the conclave starting Tuesday, we could have a new pope by this time next week!  (Did you know the longest conclave in history lasted over two years - hopefully the Holy Spirit will work a little faster this time!) If you would like to do something for the church, consider adopting a cardinal.  They have a huge weight on their shoulders, and I for one am glad that I will never be put in the position to have to decide on the next pope!  The website www.adoptacardinal.org will randomly select a cardinal for you to pray and offer sacrifices for as they enter the conclave.

I registered this afternoon, and amazingly the cardinal assigned to me was Cardinal Dolan! Wow - awesome and also a bit of a heavy assignment as he is considered to be papable! 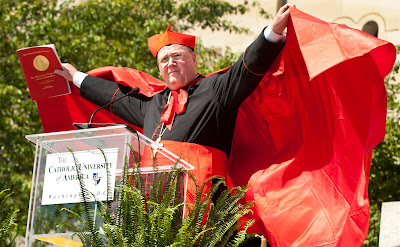 Here he is speaking at Andy's graduation in May

Since I never got a chance to share my thoughts on Pope Benedict's abdication, now is a good time to do so.  I was saddened and shocked by the news that Pope Benedict would be stepping down at the end of February.  Philip and I watched as his helicopter touched down in Castel Gandolfo, heard his address to the people in the square and received his final blessing.  We also watched a couple hours later as they closed the gates and the Swiss Guard turned over their duties to the Italian police.

Andy and I were blessed to attend a papal audience in 2007 when we visited Italy.  When we went to North American College to pick up our tickets we were offered a tour.  I remember our guide walking us down the hall and stopping at a statue of Pope John Paul II. He said, "People came to Rome to see Pope John Paul II; they come to hear Pope Benedict XVI." 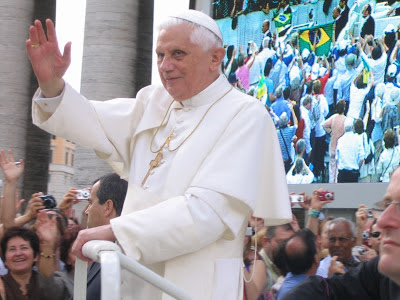 Andy managed to catch this picture on our little
point and shoot camera during the Wednesday audience
Andy has had a few brush-ins with the Pope emeritus.  In college, he was part of a small group of students that had an audience with then-Cardinal Ratzinger.  Then when the Pope came to the U.S., Andy was able to shake hands with him when he arrived at the Basilica of the Immaculate Conception to address the U.S. bishops.  He said what many others who met the Pope during that time said. He looked me directly in the eye, his look was warm and loving.  He really took the time to take in each person that he met.  At the time of his visit, we were morning the loss of our second baby, Gabriel.  After Andy shook the pope's hand, it was like he was healed from the pain.  He was on Cloud 9 and I have to say I was quite jealous of that!
It was very emotional to see the Pope depart from public life at the end of February. I was sad to see such a humble, gentle servant of God leave our midst. However, I do believe that he came to his decision with much prayer and I know he felt confident that he was doing what God was asking of him at this time, so I trust.
Please pray for our cardinals.  That they may be "docile to the Holy Spirit," as Pope emeritus Benedict said.  And pray for the man who will be elected, whoever he may be. He has a big job in store for him!
Posted by Joy Complete at 4:49 PM