Since Philip isn't in preschool this year, I figured I better try to teach him a few things that he would be learning if he were in school. We have been working through the alphabet letter by letter, doing fun activities. We take one letter every two weeks so that we have enough time to do a variety of activities at an easy pace. This has helped me to finally start using all those great ideas that I have pinned on Pinterest and is keeping Philip engaged at home. We are learning through play!

I want to document what we have been doing, so that I will have everything in one place, should I do this with Julia in the future. So, read along if you like. I always like to see what other friends are doing with kids of the same age. 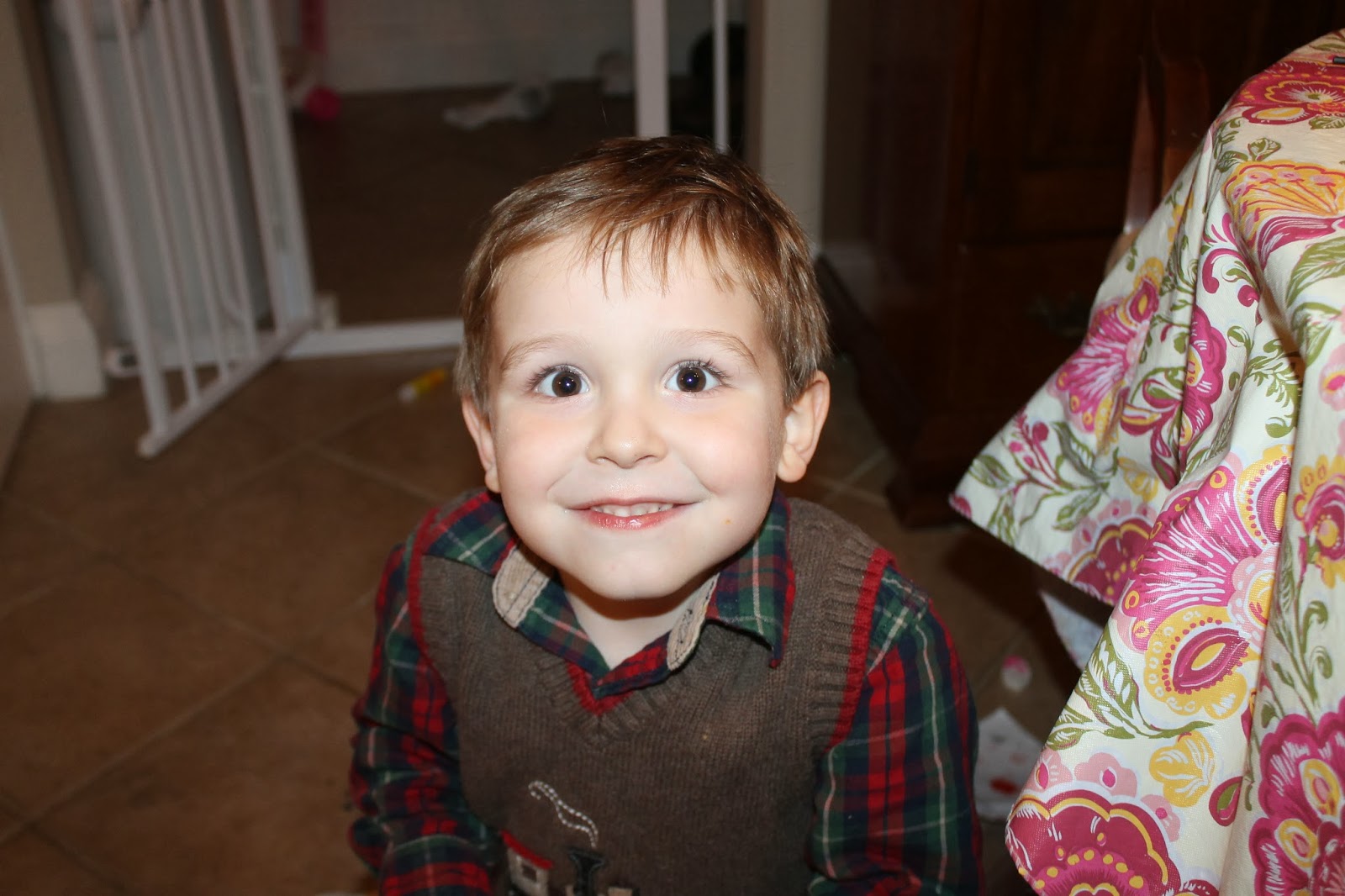 We usually do these activities during Julia's naptime. It is our special time together. Some days we work through her whole nap and other days we do nothing at all - it just depends on the day.

I'm starting with the letters we worked on in January - F & G.

Mystery Box: I found lots of items around the house for his mystery box this week. This is the first thing we do each week and he usually pulls out the mystery box to look through a few times throughout the two-week period. This week's items included:
A fish, feather, fence, flower, flag, fork, flute, frog, fireman, felt, numbers 4 & 5, picture of our family

Books we Liked:
Frog and Toad series by Arnold Lobel
Fox in Socks by Dr. Seuss
At the Firehouse by Anne Rockwell
Fire Engines by Anne Rockwell
The Birthday Fish by Dan Yaccarino
Feathers for Lunch by Lois Ehlert
Frederick by Leo Lionni
Rainbow Fish Discovers the Deep Sea by Marcus Pfister
Goodnight, Little Rainbow Fish by Marcus Pfister
Too Many Frogs! by Sandy Asher

I also printed out the Little Letter "F" Book from The Measured Mom and I read it to the kids a few times during meals.

Food we Ate:
For dinners we had a healthified Fettuccini Alfredo and fajitas.

Philip helped me make a fruit pizza for dessert one night: 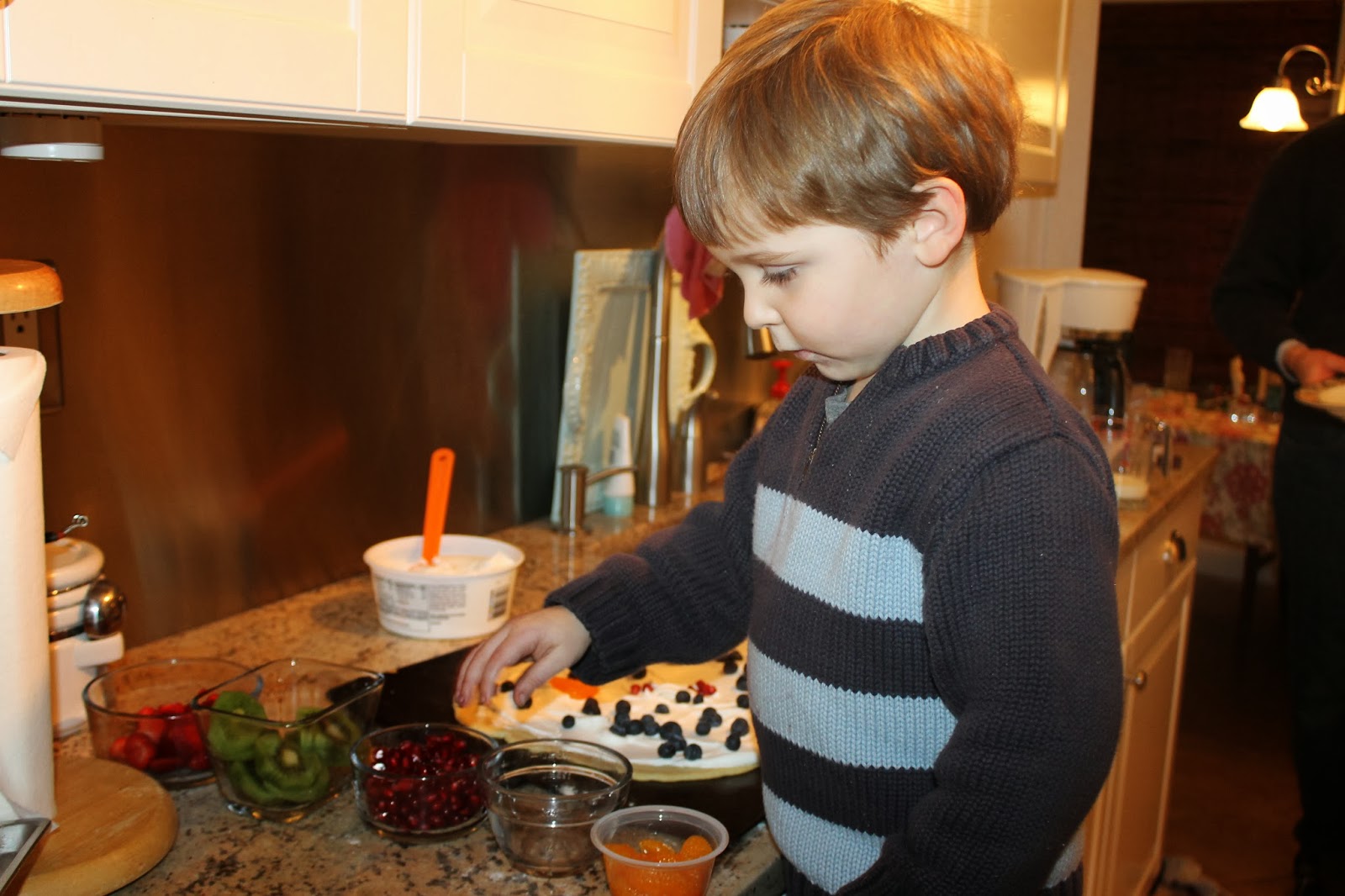 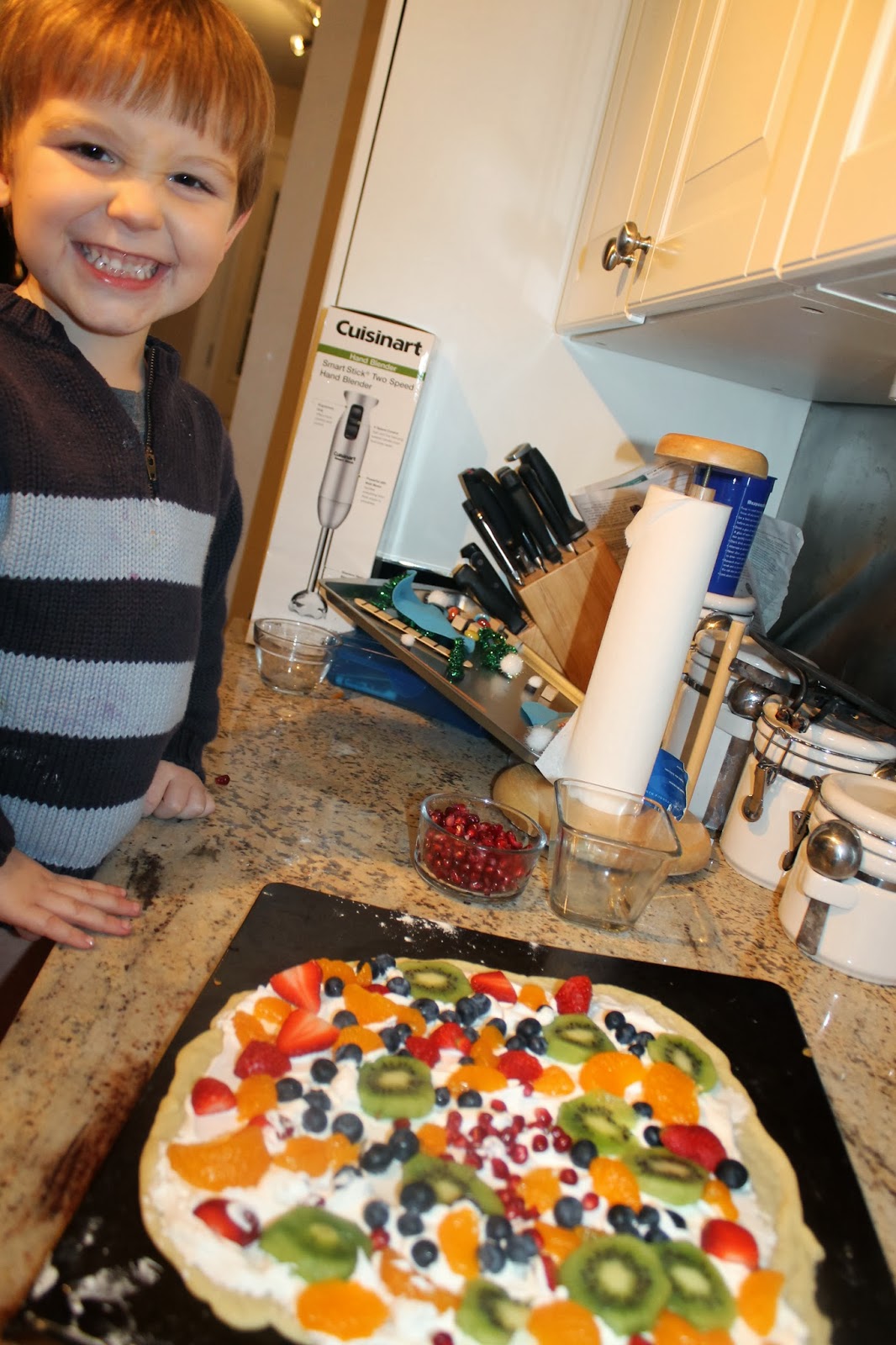 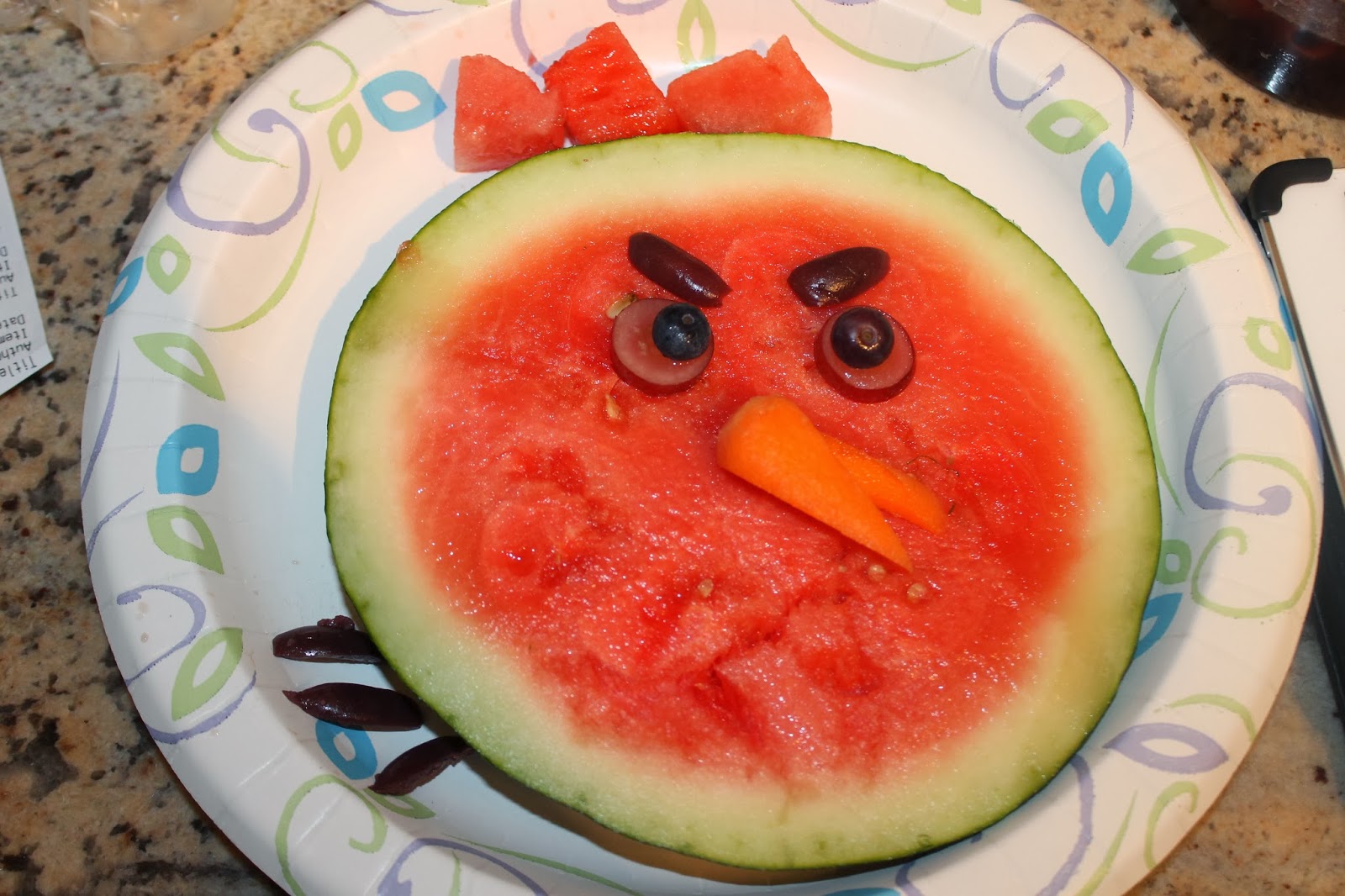 A fruit face (I attempted an Angry Bird)
He later saw this picture.
Philip: Did you make a birdie for me, Mommy?
Me: Yes, did you like it?
Philip: I liked it all except the vegetables. 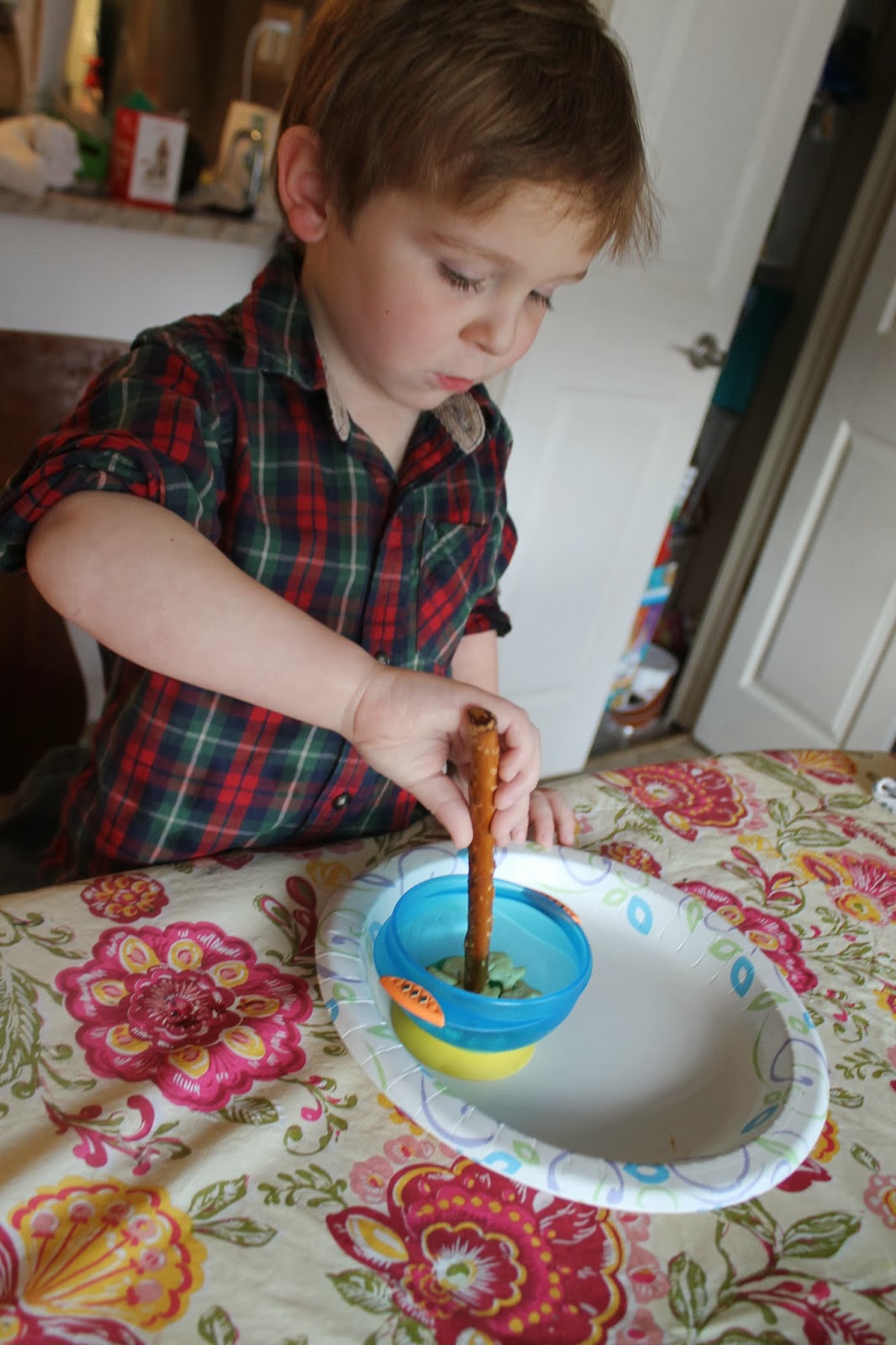 Fishing snack
(pretzel rod, peanut butter to dip the rod into, and goldfish crackers to fish out of a "lake")
I first saw this using a celery stick as the fishing rod, but that wouldn't fly with my little man at this point in time, so he got an extra shot of carbs instead.

Activities:
We went fishing in the sink. He requested this a few times and Julia got in on the action as well. 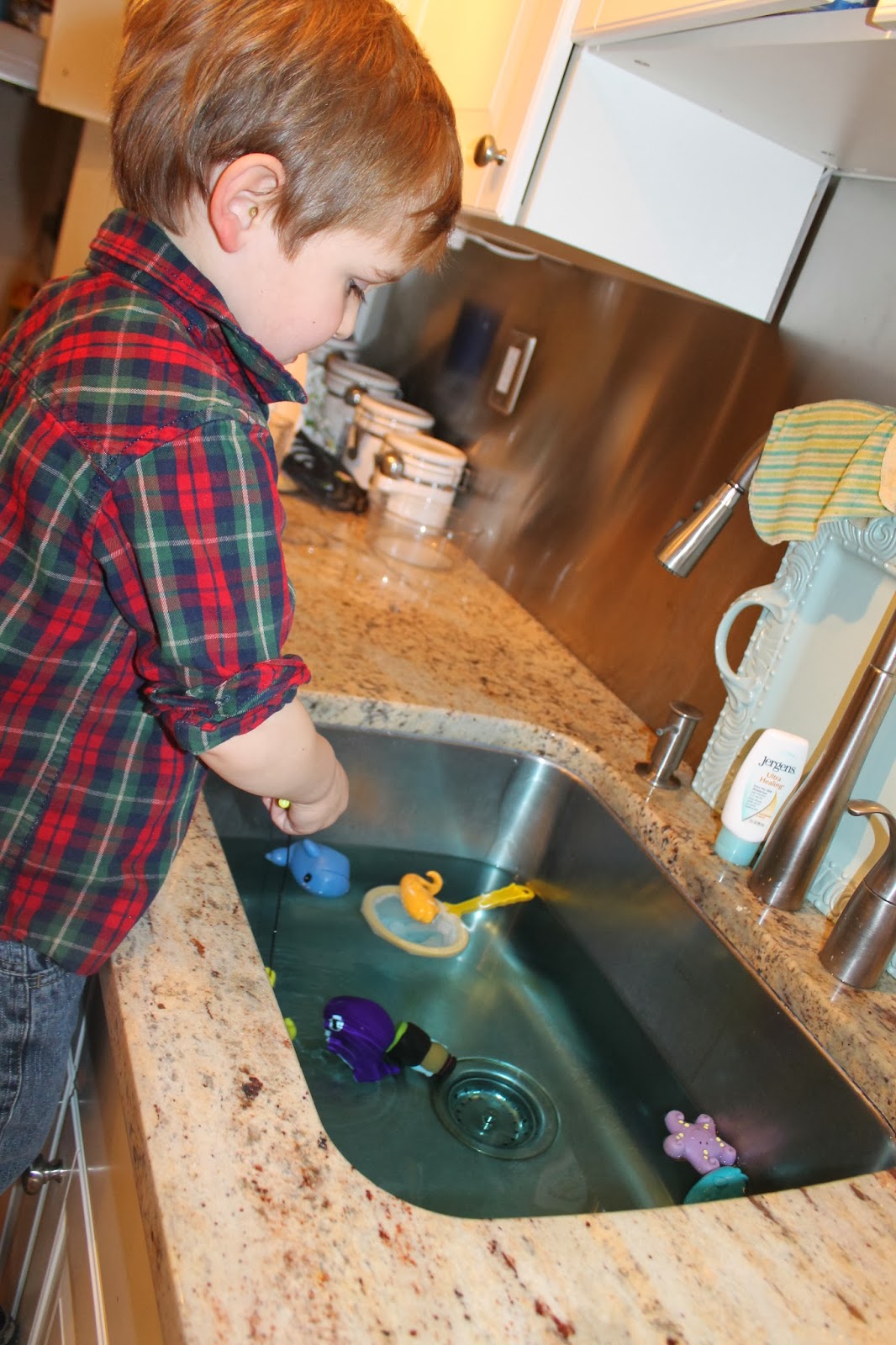 I put together a farm sensory bin. I should have taken a picture of it before it got all mixed up, but you get the idea. Inspired by this. 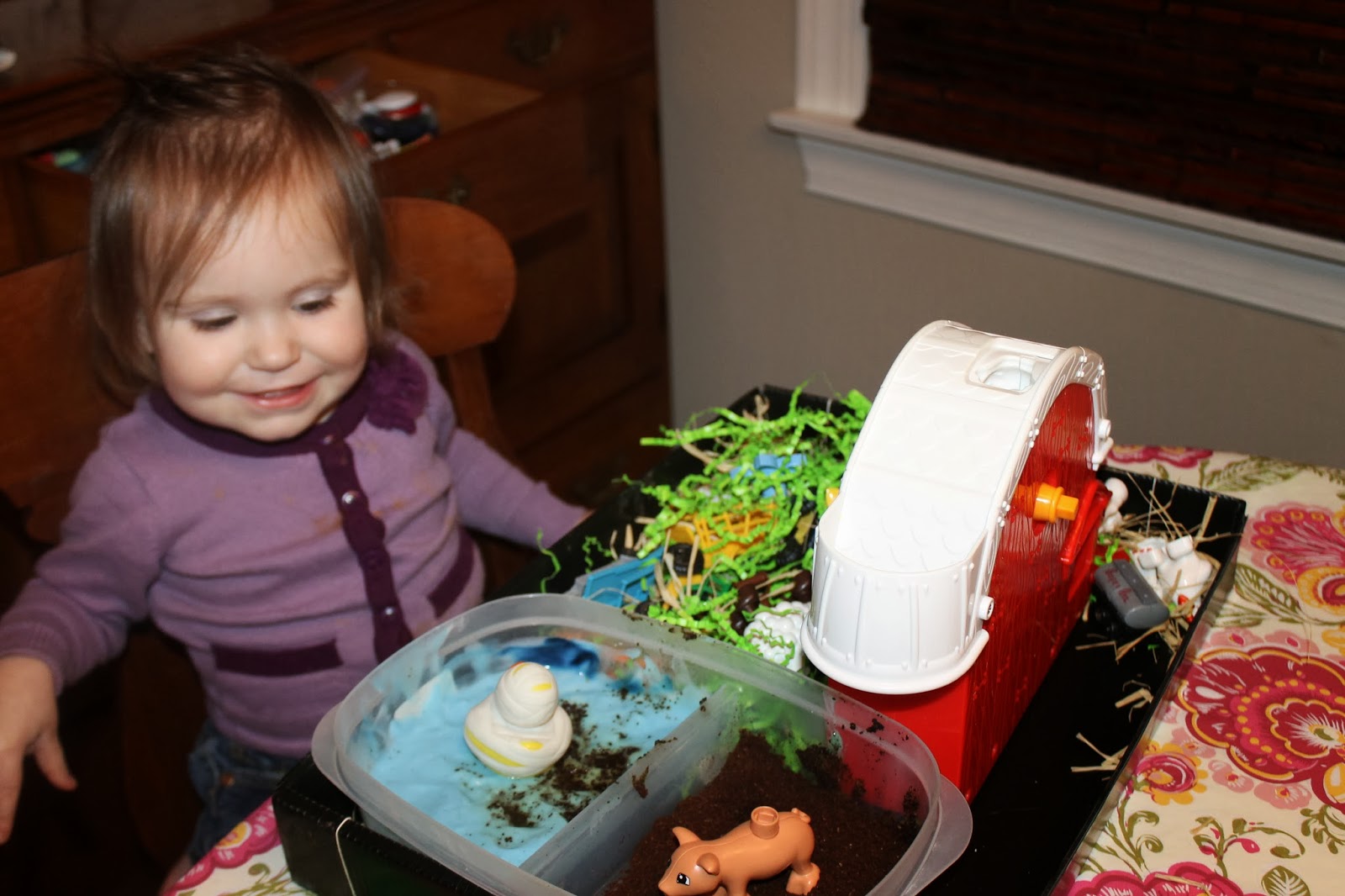 We played with our felt board. 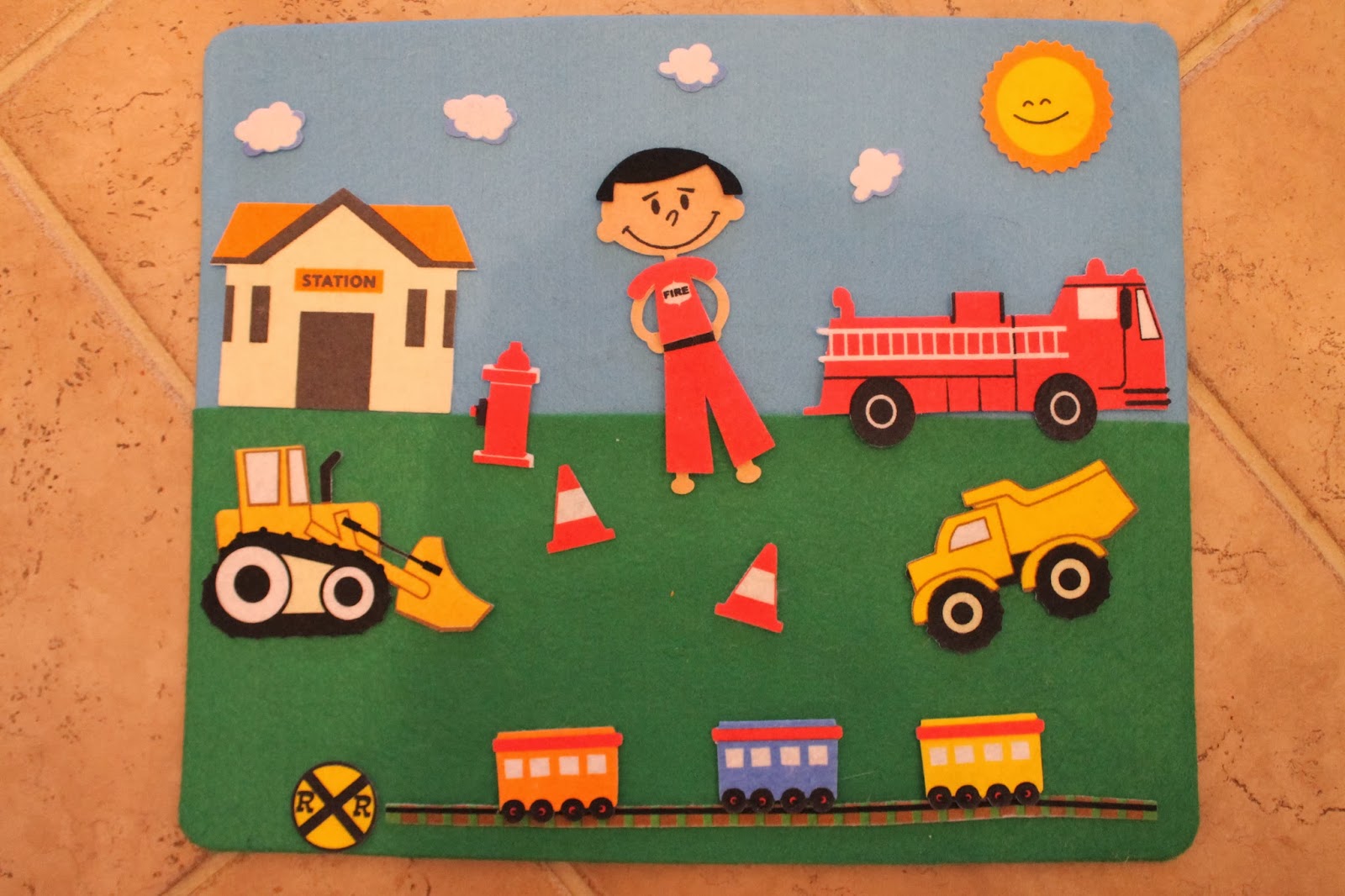 While Philip was at Atrium one week, Julia and I spotted this game at a store. 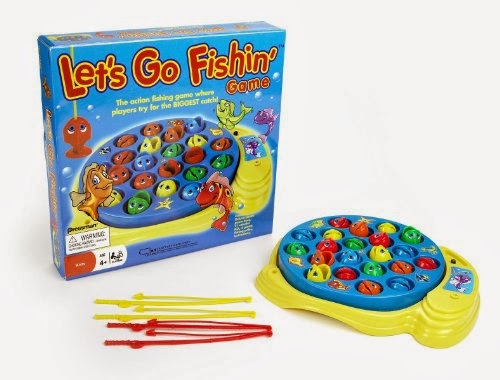 I had this growing up and loved it. We had fun playing with it all week. It was challenging even for me to catch the fish when they were spinning around, so we modified it. Philip would try to catch them on his rod while the fish were still. Julia practiced taking the fish out of the pond and putting them back in their holes.


Our letter craft of the week was a Fox. 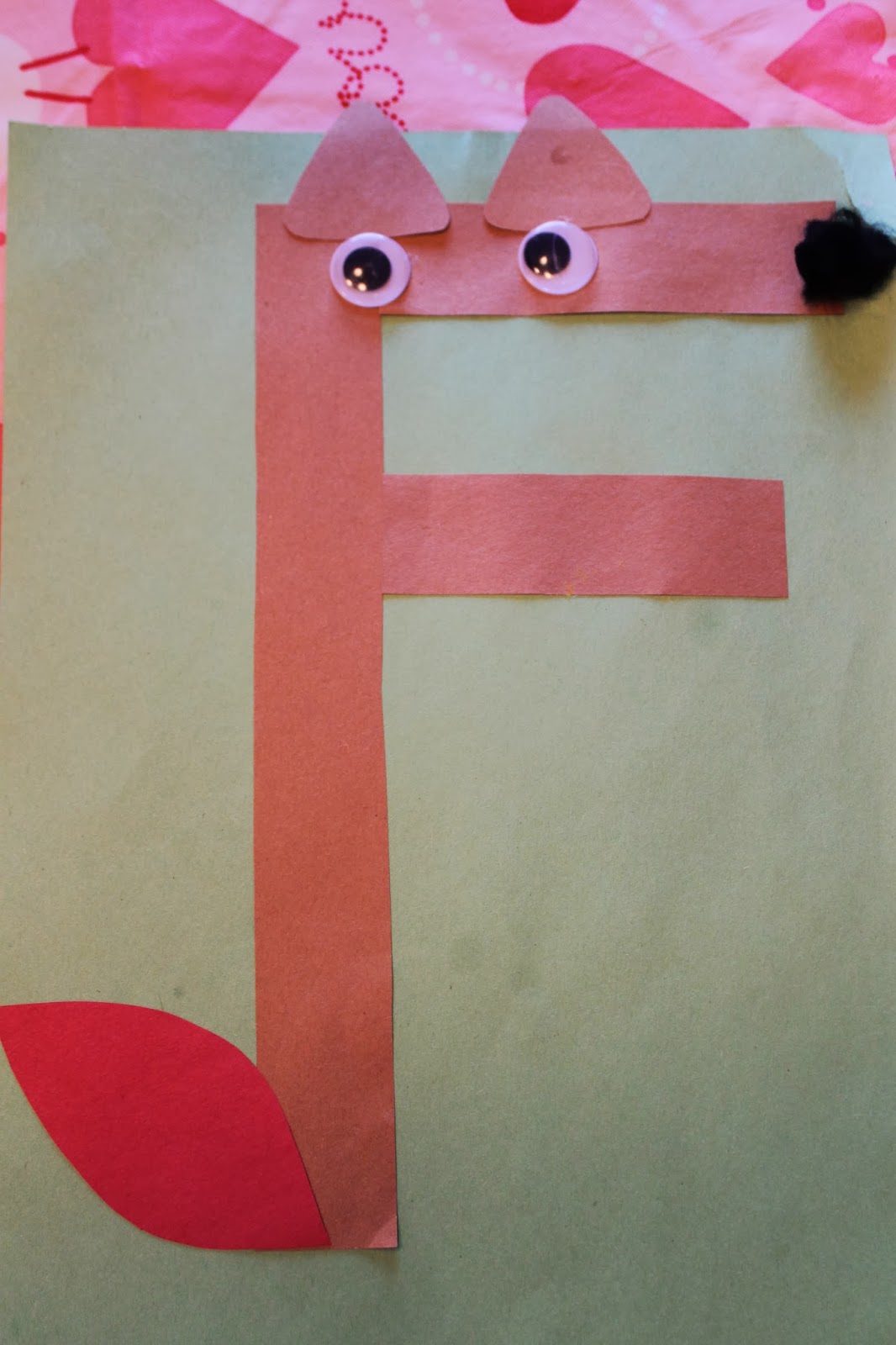 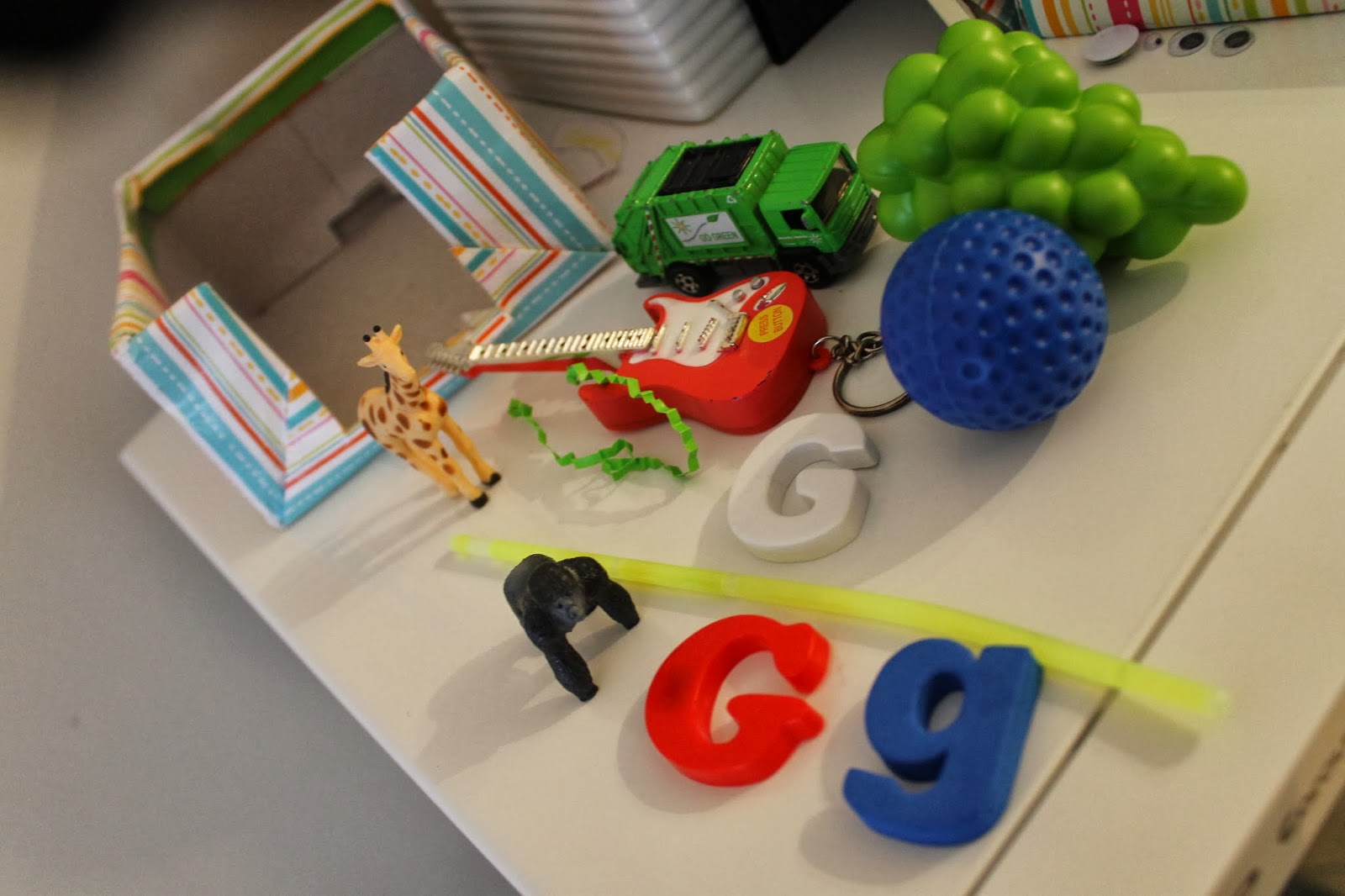 Books we Liked:
Goldilocks and the Three Bears retold by Jim Aylesworth
Green Eggs and Ham by Dr. Seuss
Geraldine's Big Snow by Holly Keller
The Clown of God by Tomie de Paola
George and Martha: The Complete Stories by James Marshall
The Gingerbread Man by Jim Aylesworth
New Adventures of Curious George by Margret Rey
Ginger by Charlotte Voake
My Granny Went to Market by Stella Blackstone
Giraffe and a Half by Shel Silverstein

Food we Ate:
Grapes and Gingersnaps

His special snack was a carrot garden. 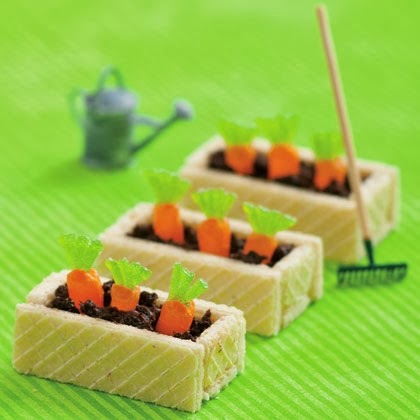 Pic and recipe from this website. Mine didn't turn out quite as cute because I didn't get the green candy for on top. It seemed like it would be a pain to put together and I didn't want to buy a whole additional package of junk food just to get the leaves on top. He never knew the difference!

We made Gak using this recipe. It would form a solid ball and then immediately start melting in your hands. Bonus: It smelled really good because of the shampoo - even Philip commented on the smell. 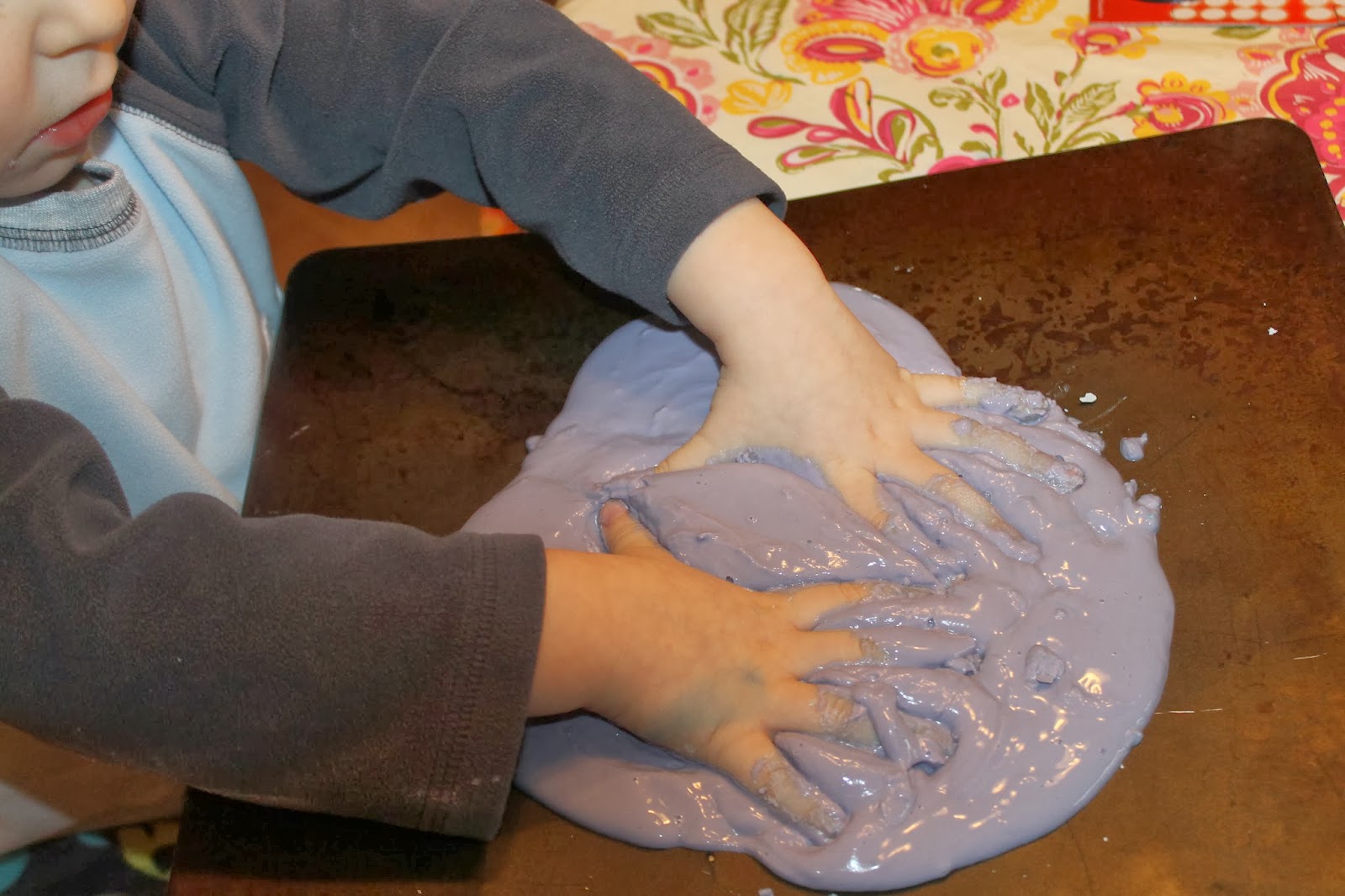 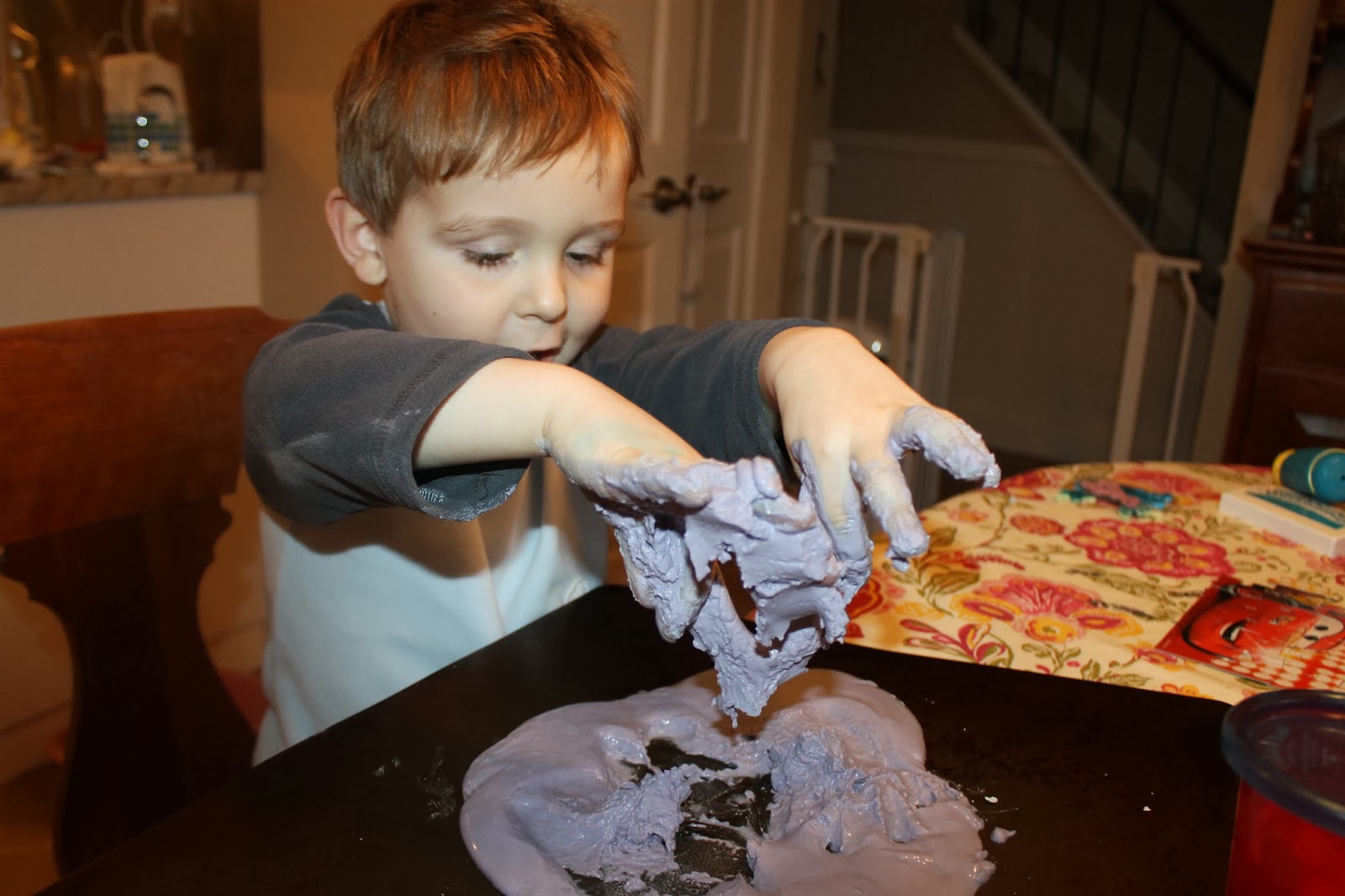 Despite what it looks like, this was really easy to clean up because it is mainly cornstarch - it washed off of chairs, clothes, and hands easily.
We made a gumdrop sculpture. 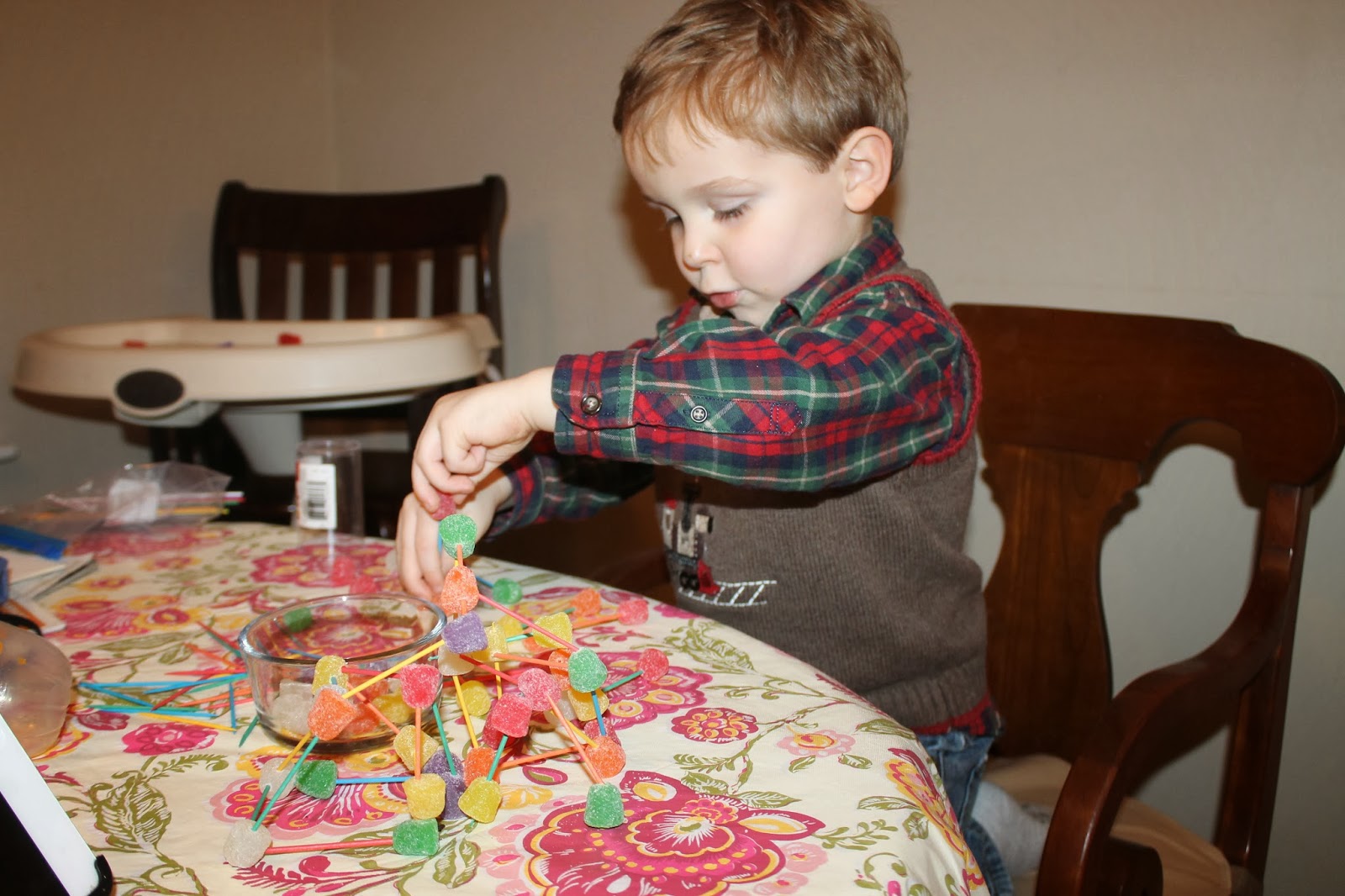 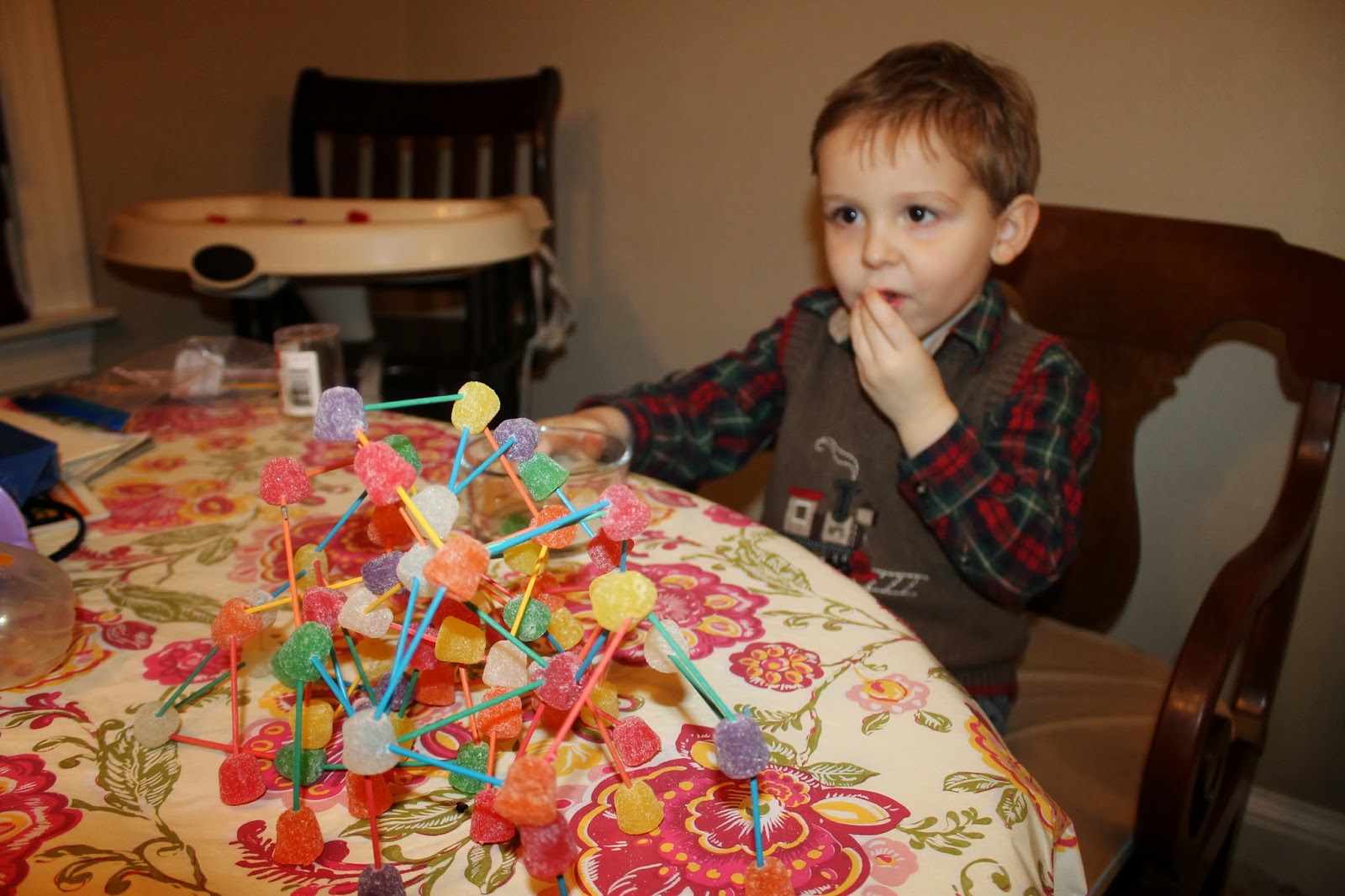 Philip was sad when we ran out of toothpicks, but then realized he could eat the extra gumdrops. 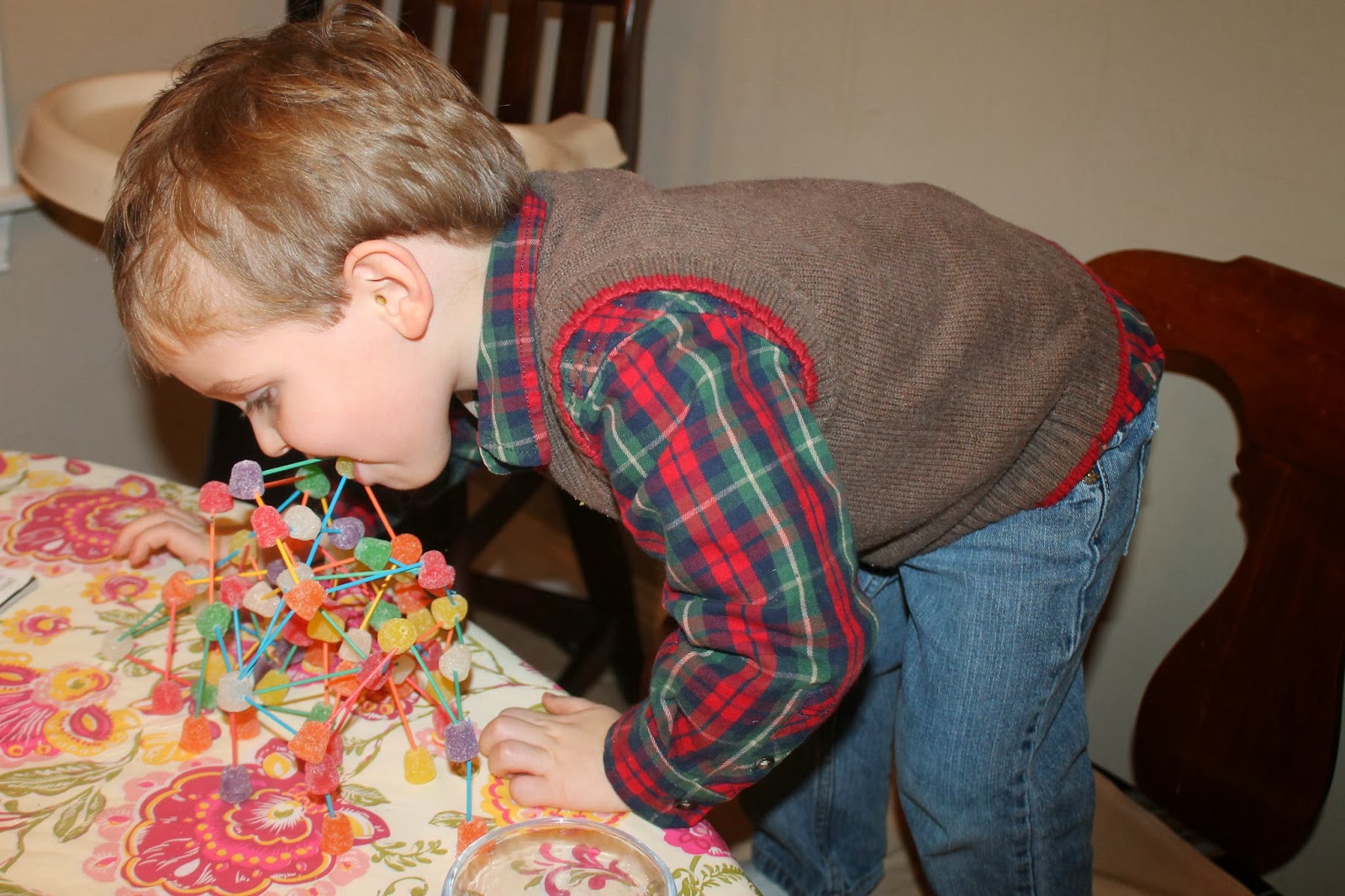 Claiming a few extra as his own

After reading the Gingerbread Man many times, we had to make gingerbread cookies. I asked Philip if he thought our gingerbread man would run away from us, but he said no. 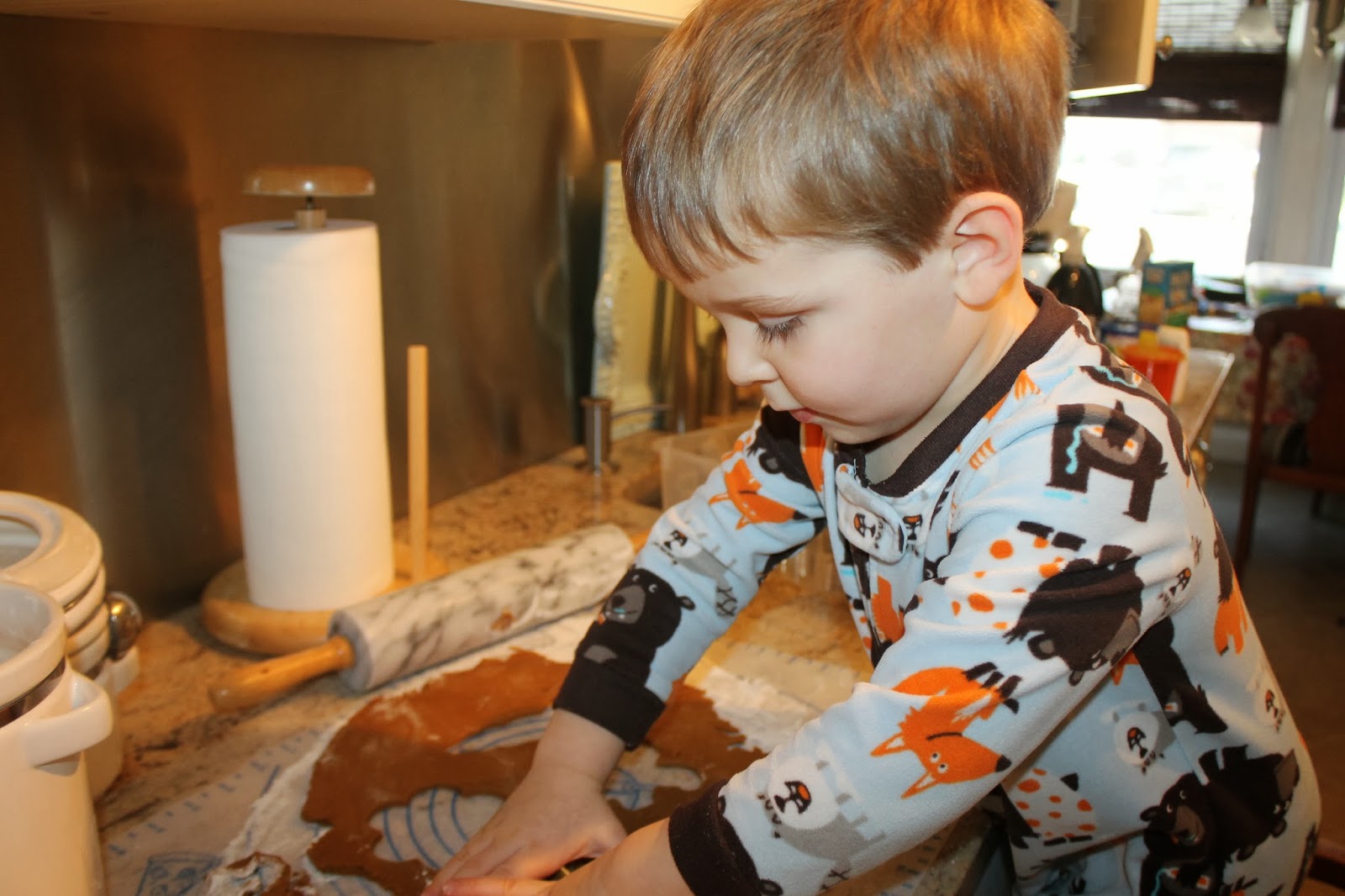 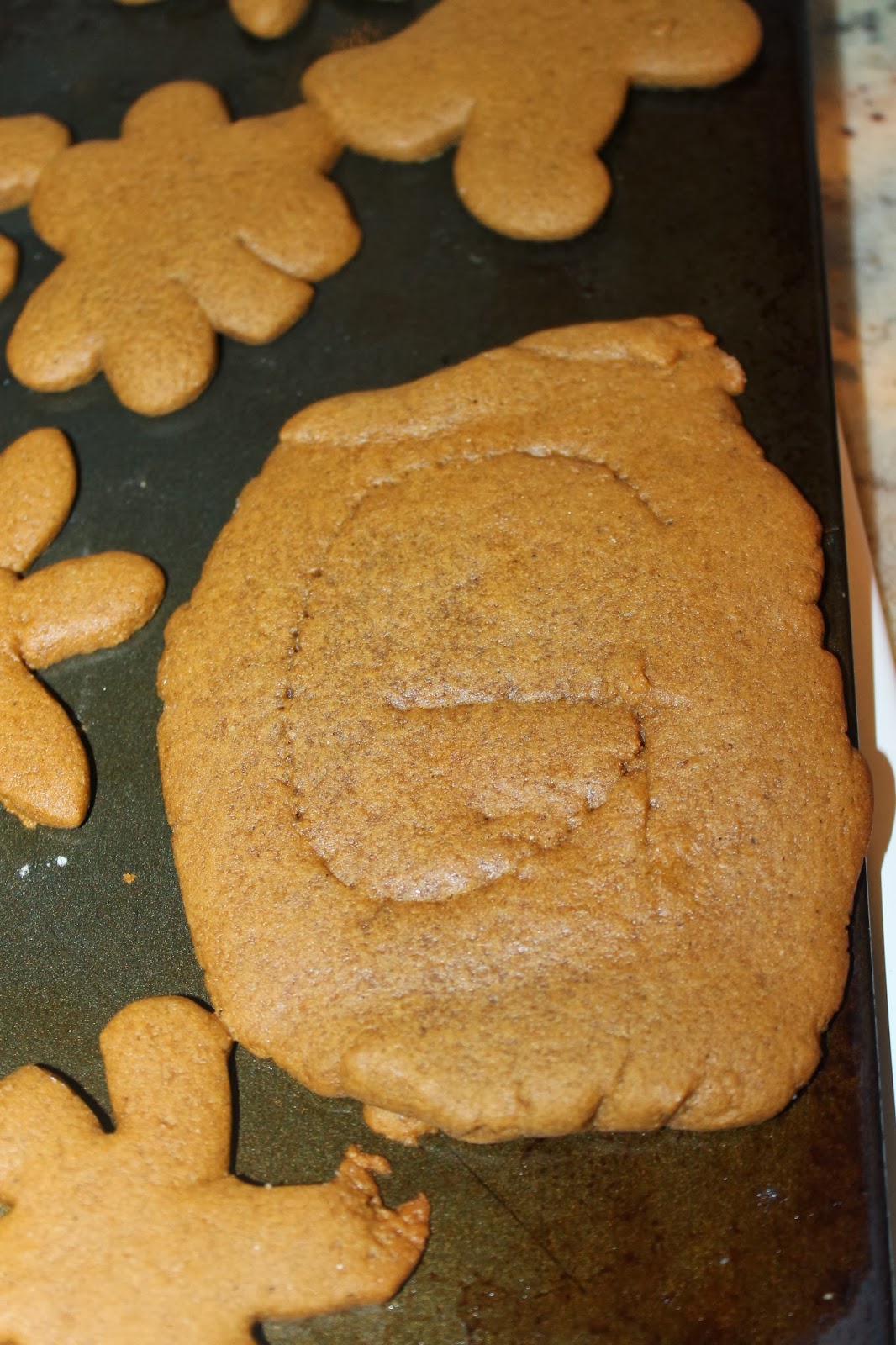 We made a G with our extra dough 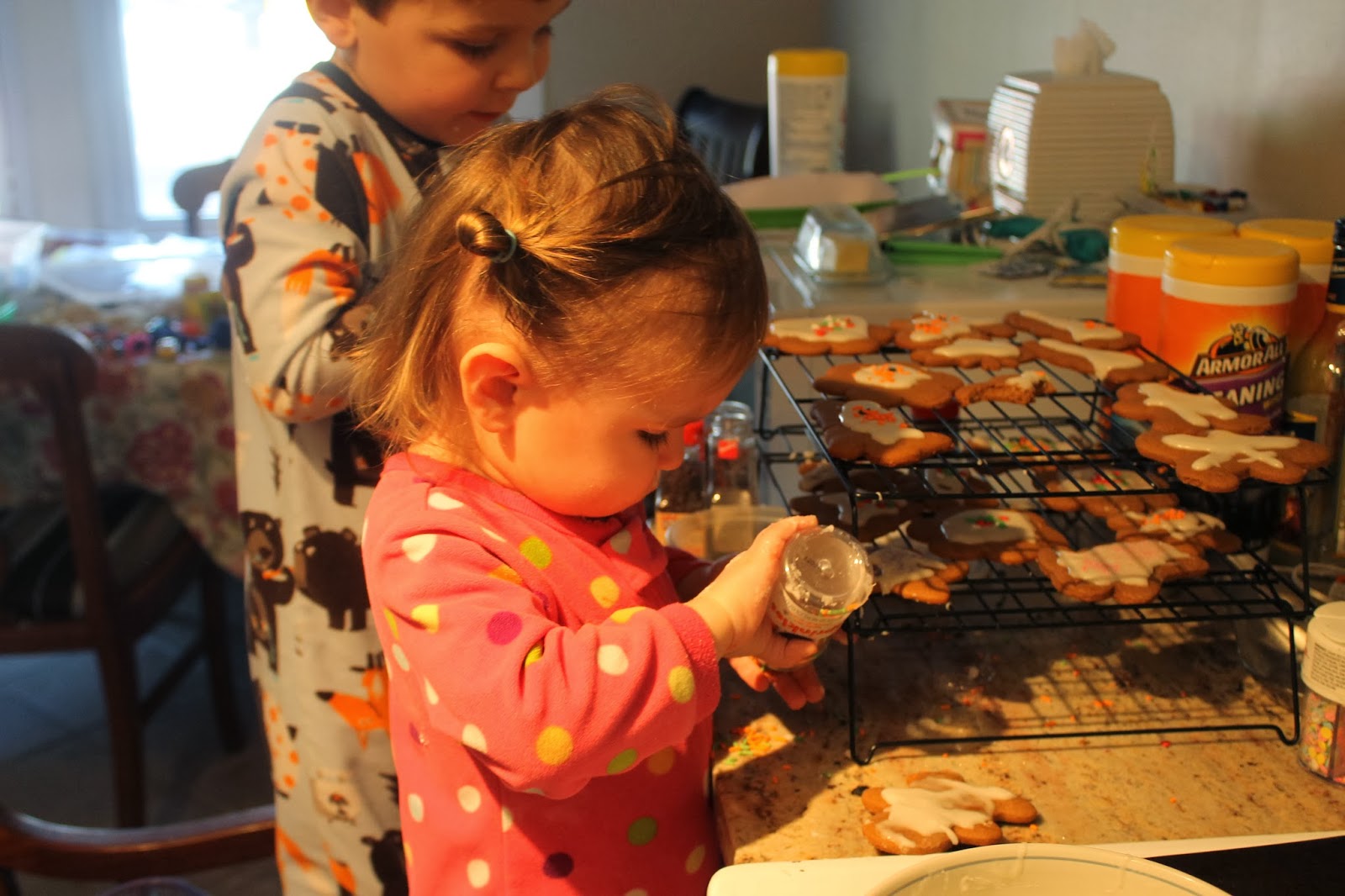 Julia woke up on time to help us decorate (and undecorate) the cookies. Andy was out of town and it was one of those freezing days where we didn't set foot outside. I let them stay in their jammies all day and have at it with the decorations.

We played games. He got a couple games for Christmas, so we pulled those out as well as the other games that Andy and I have. The kids always love to look through our games and all their pieces. We have a rule that only one game can be out at a time - otherwise we have a huge mess in our basement. That rule got bent a bit this week, but we got everything back in order.

Our craft of the week was a goat. When I showed Philip a picture of what we would be making, he laughed at the silly goat. 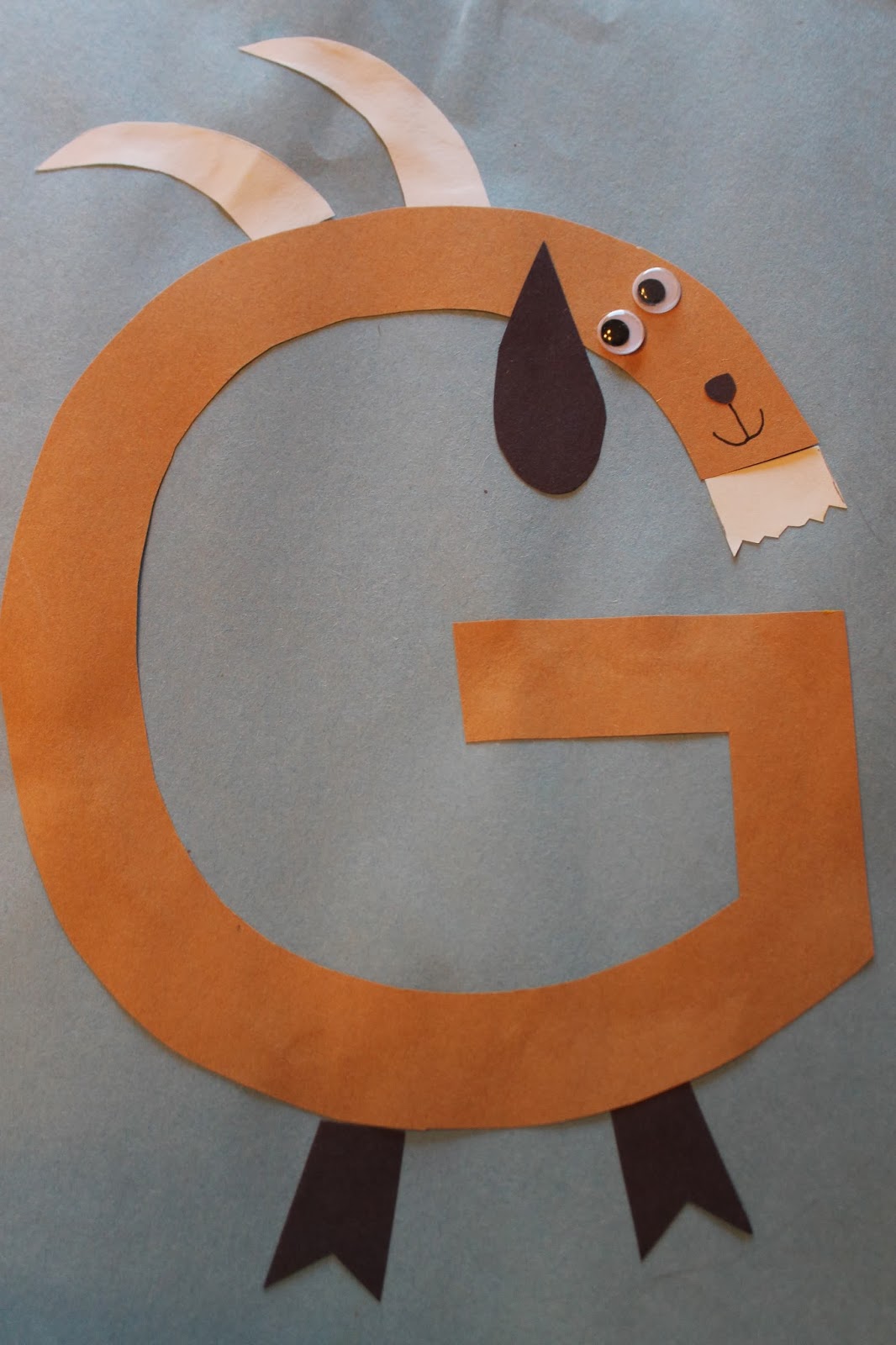 We ended the week by going to our goddaughter's birthday party. It had a Frozen theme and they sent us home with a few glow cubes - the perfect way to end G week! 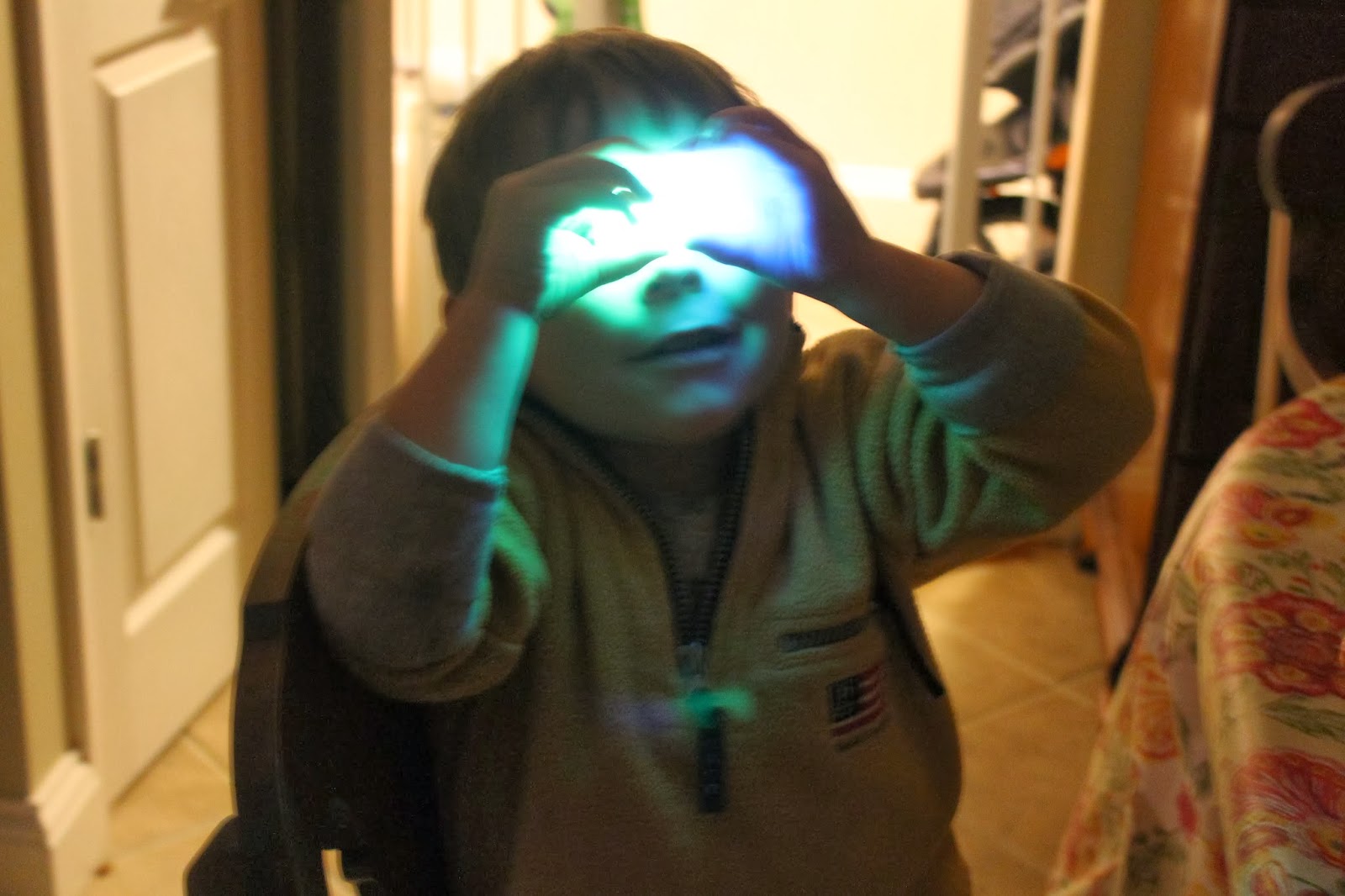