I don't think I have to tell anyone that it has been a really cold winter. We had several days this month where we didn't open the blinds, much less the door - it was just too cold outside and we didn't want to let out any of the warmth in our house. We managed to have lots of fun anyway! 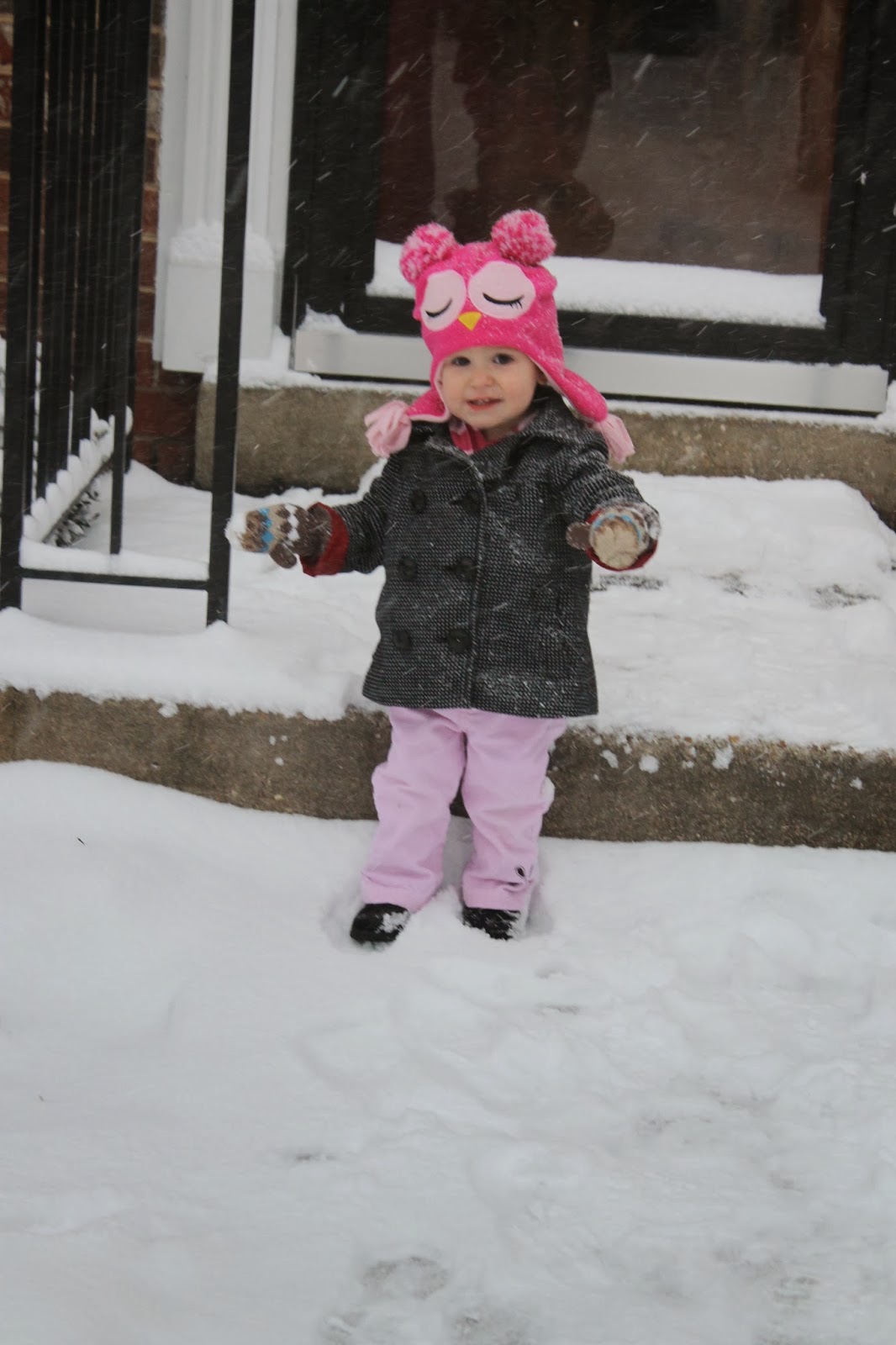 She pretty much never moved from this location. 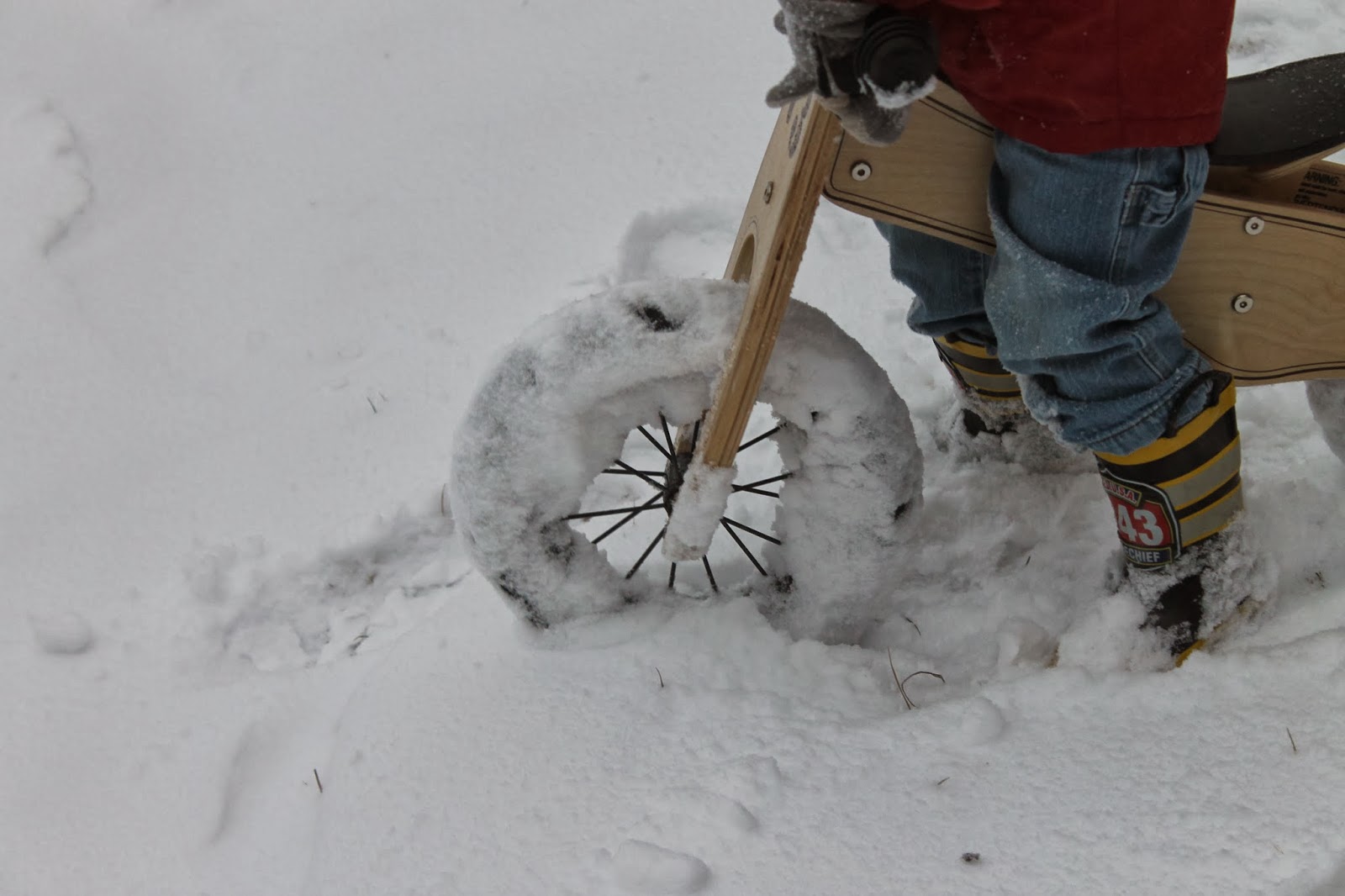 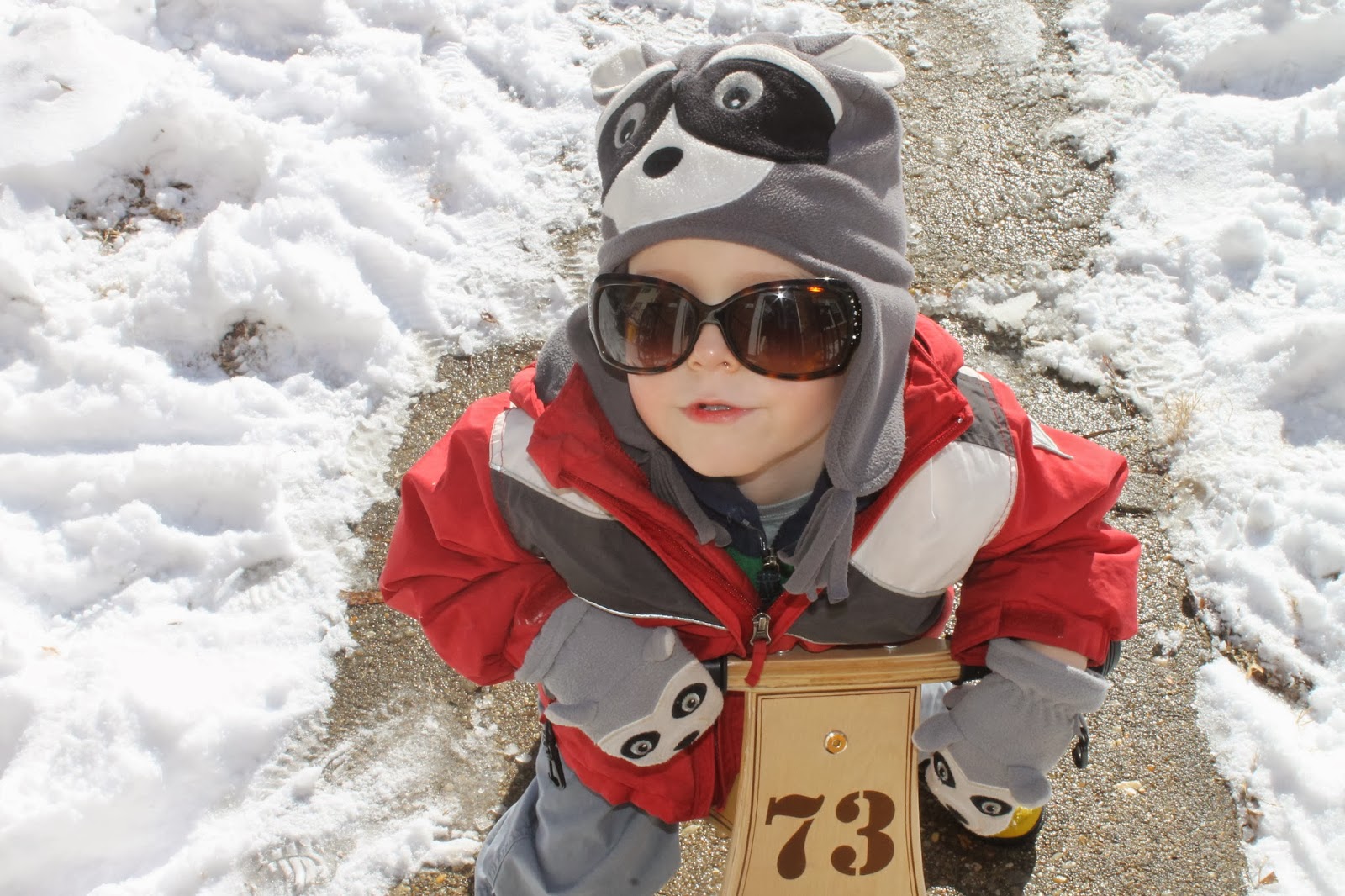 The snow was too bright, so he needed Mommy's sunglasses.


After we got back from our trip to Georgia, we got settled back at home. First order of business - family Christmas! Instead of bringing all of our gifts down to Georgia, Andy and I left our presents at home. The kids also had some presents from family that we opened yet. 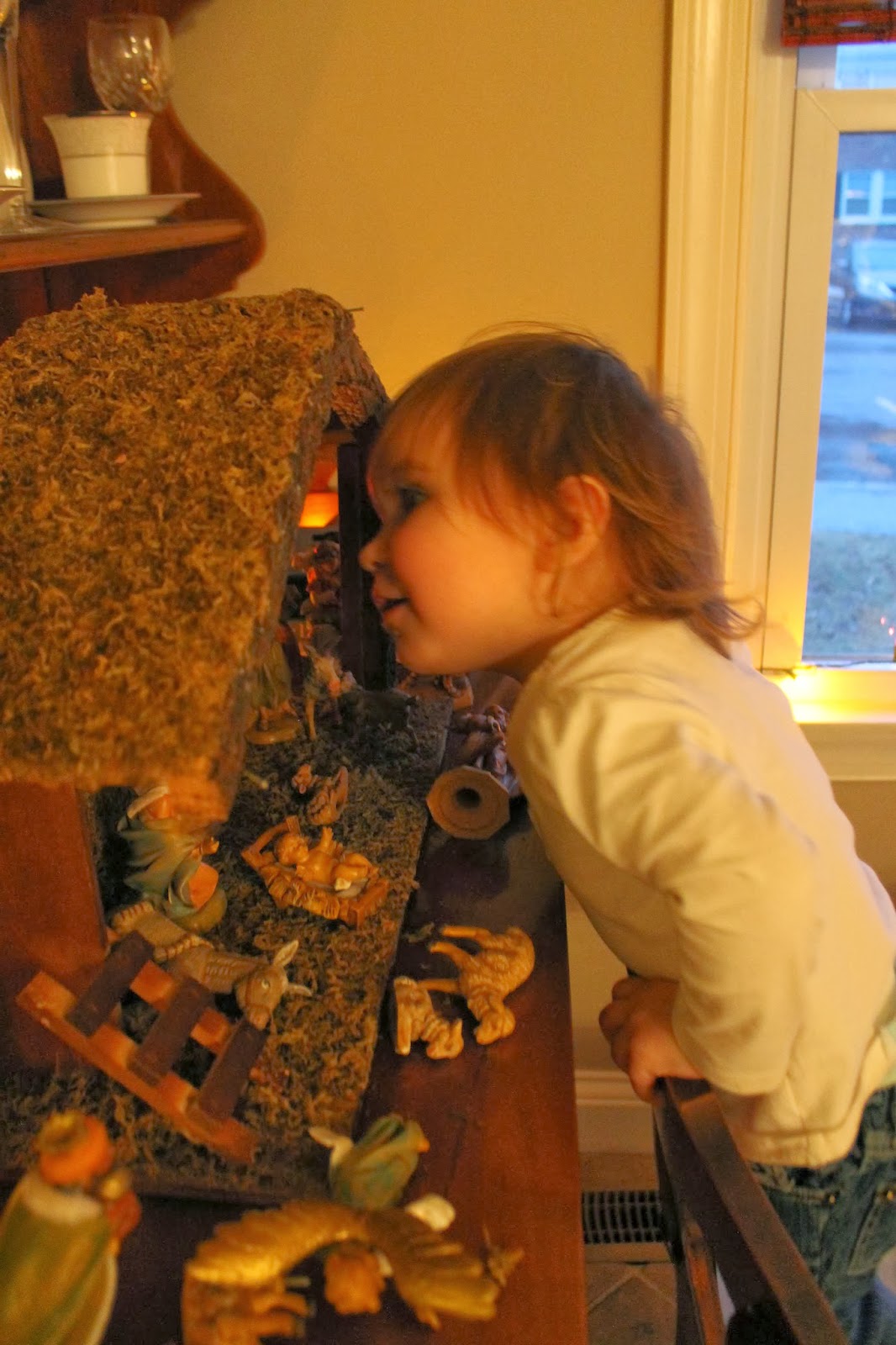 Julia loved playing with the Nativity set, but there was utter destruction in Bethlehem most days. I highly recommend Fontanini if you are looking for a beautiful nativity set that is kid-friendly.

Andy decided it was finally time to transition Philip to a toddler bed. I loved having him in his crib - it kept him contained for quiet/nap time and he slept well in it. (It was also a good place to contain him when he was in serious trouble.) I always said we would wait until he climbed out of his crib before we changed his bed, but he just never ever tried to climb out of it. Now that he is potty trained  (though not night trained at all), and I'm seeing pics online of kids his age moving from toddler beds to regular beds, we figured we better go ahead and do it. Poof, there went all naps and quiet time! He acts like he has never been left in his room alone before and freaked out anytime I tried to leave him for afternoon quiet time. It was not worth the fight, and he is doing okay without his afternoon rest time (although he often gets dark circles under his eyes late afternoon and a burst of hyperactivity in the evening), so we usually don't try. He and Julia's nap schedules have been off from each other for a long time now, so I am finally accepting having no kid-free time during the day. Philip almost always slept through the night while in his crib, but nowadays he wakes up at some point during the night and come padding into our room and bed. When he was a baby and toddler he would freak out if we tried to put him in bed with us, so we are enjoying having a little guy in bed with us now! 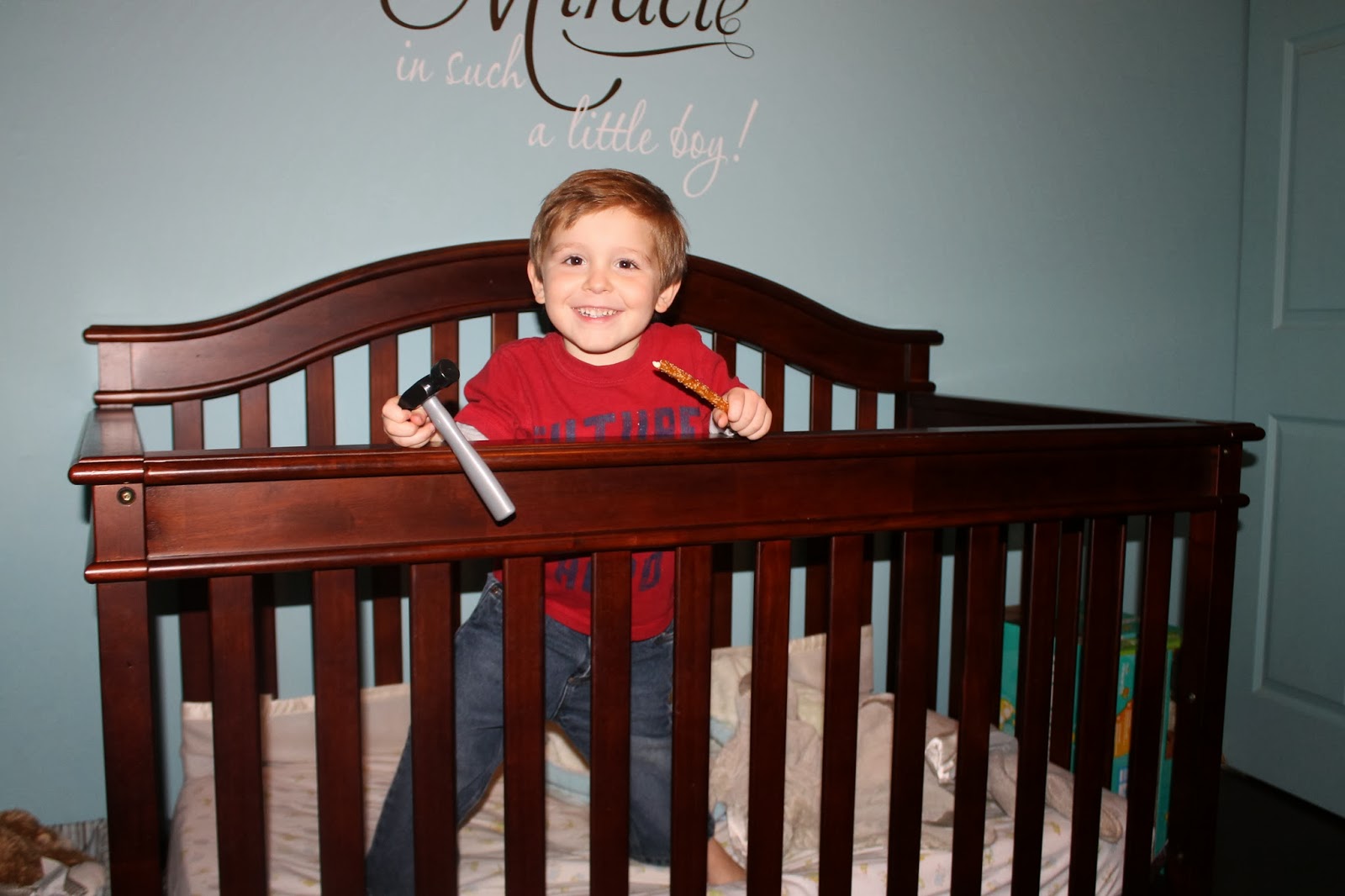 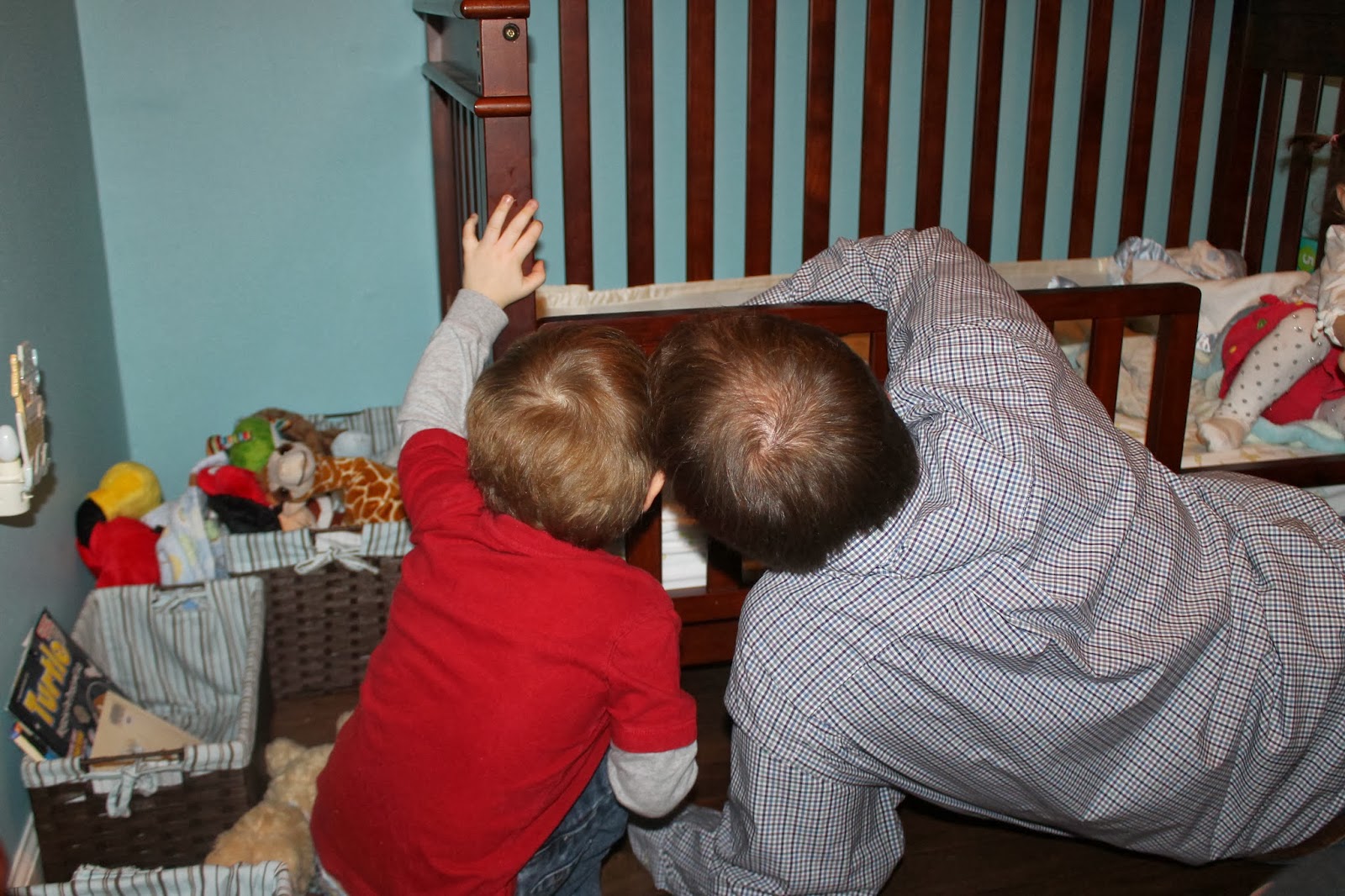 This month we did a lot of preschool tours. We have been doing some preschool work at home this year, (which I hope to start posting about regularly) but we had always planned to put him into one year of preschool for his social development. We visited five schools and I really liked two. We went with Philip's favorite - he cried when we left the school and rejected every school we visited after. He got registered over the weekend and will start in the fall. 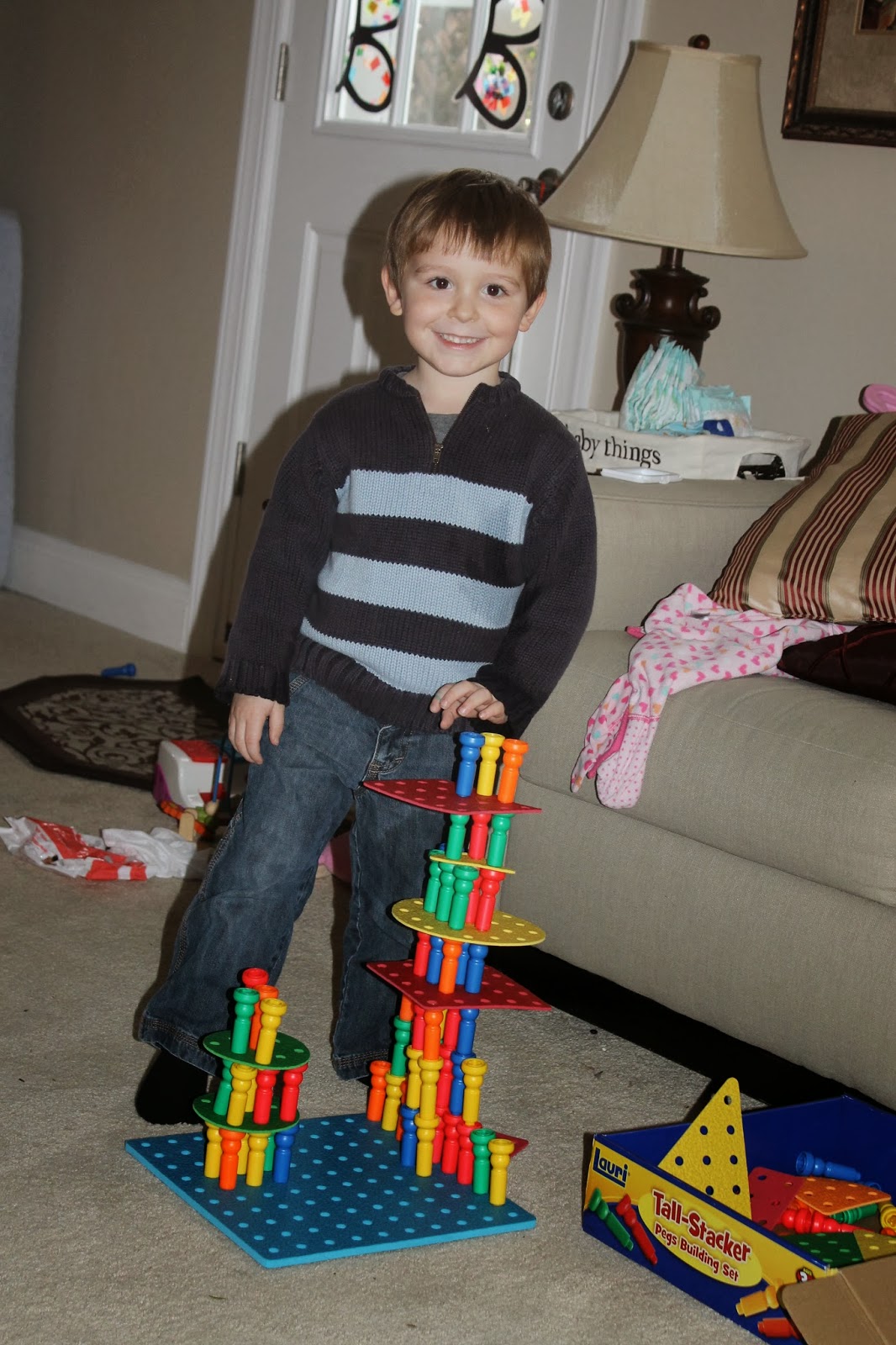 We went on a field trip with our Mom's group to a Duckpin bowling alley. You use small, three-pound balls and hit short, squat pins that resemble the shape of ducks. The kids used a ramp (and bumpers) and even Julia could do it. She would barely touch that ball with one or two fingers and it would roll all the way down the alley and knock over lots of pins. Philip loved this activity and we are looking forward to bringing Daddy to the lanes one day. 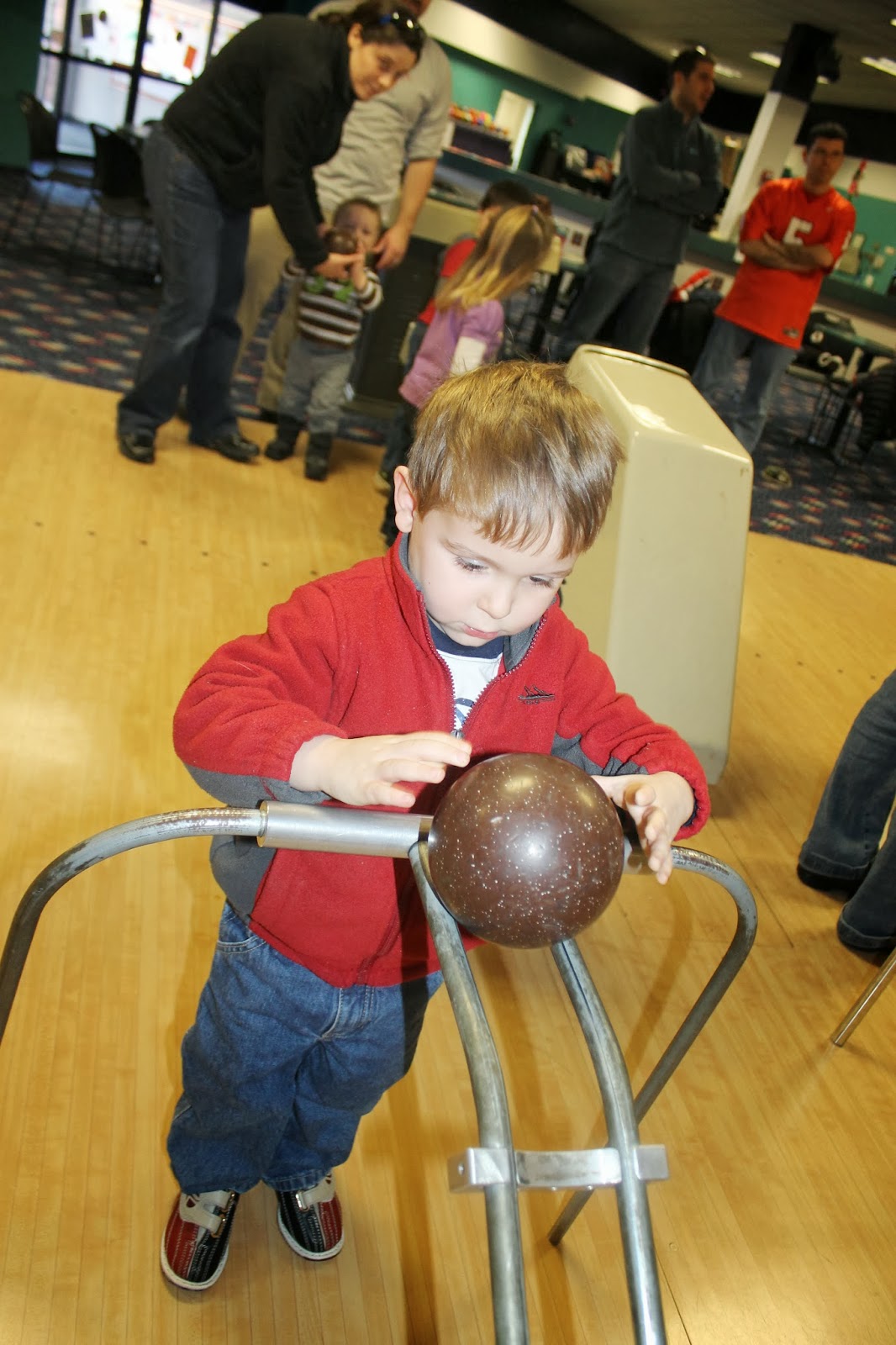 I love seeing Julia in the background, looking intently at where the ball is going. 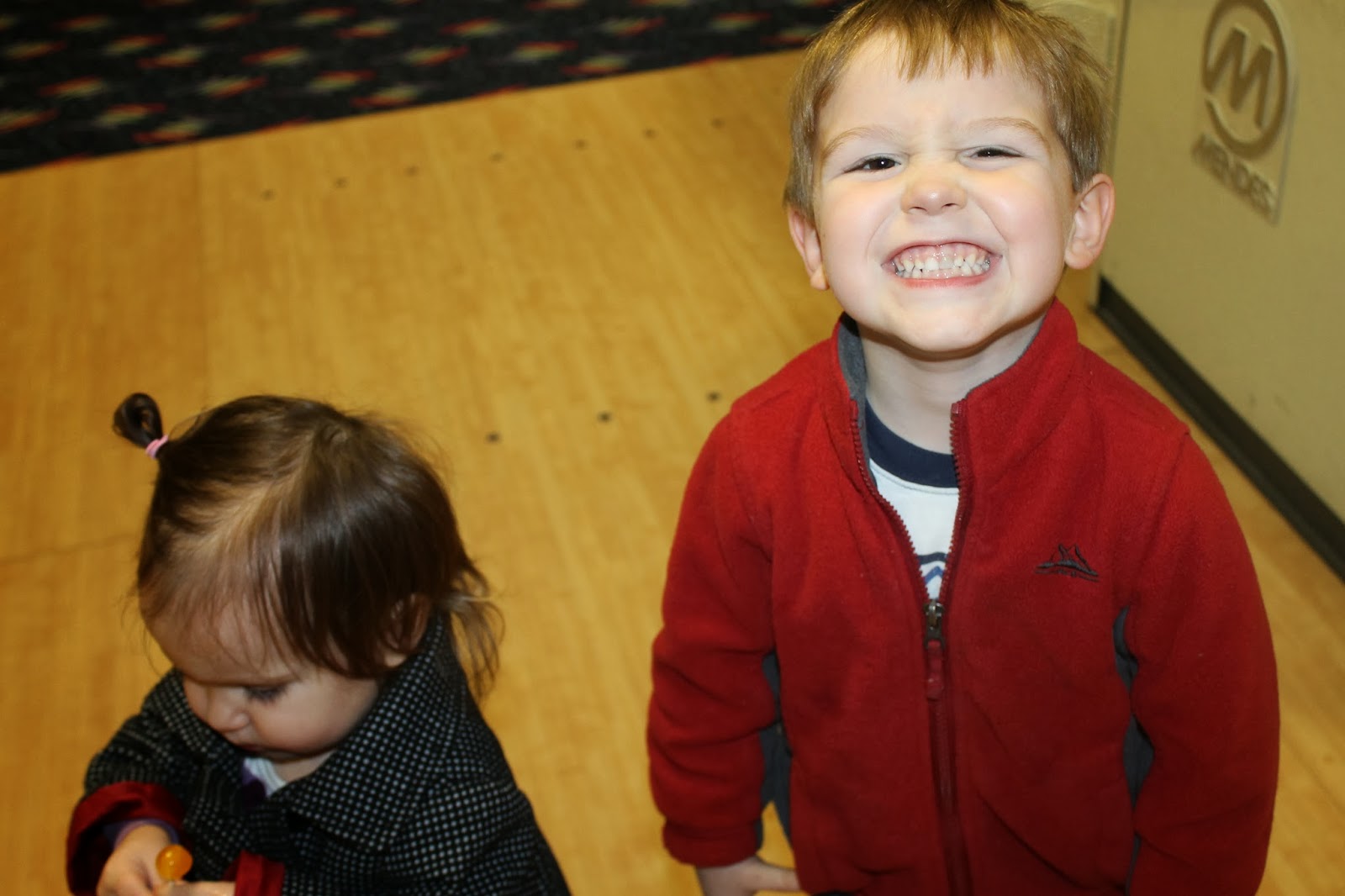 I have been on an exercising, cleaning and organizing kick, as I'm sure many others are. I missed most of my spring cleaning last year since Julia was still pretty young and needy at that point. Hoping to get a lot of it knocked out this cold winter so that once it gets warm, we can play outside!

Philip's lines of the month:
"I'm a racerboy!" He likes to use that for an excuse not to do anything - "I can't get dressed, I'm a racerboy!"
"I go ahead of you." He always has to be the first one to go up or downstairs, even though he takes for.e.ver. to do it.
"I too nervous." "I too tired." Excuses again for getting out of stuff.
"Race cars don't need headlights because the track is always lit." He picked up this bit of trivia from the movie Cars and I usually hear it a few times a day.

It was Philip's half-birthday, so we celebrated with half a cake. 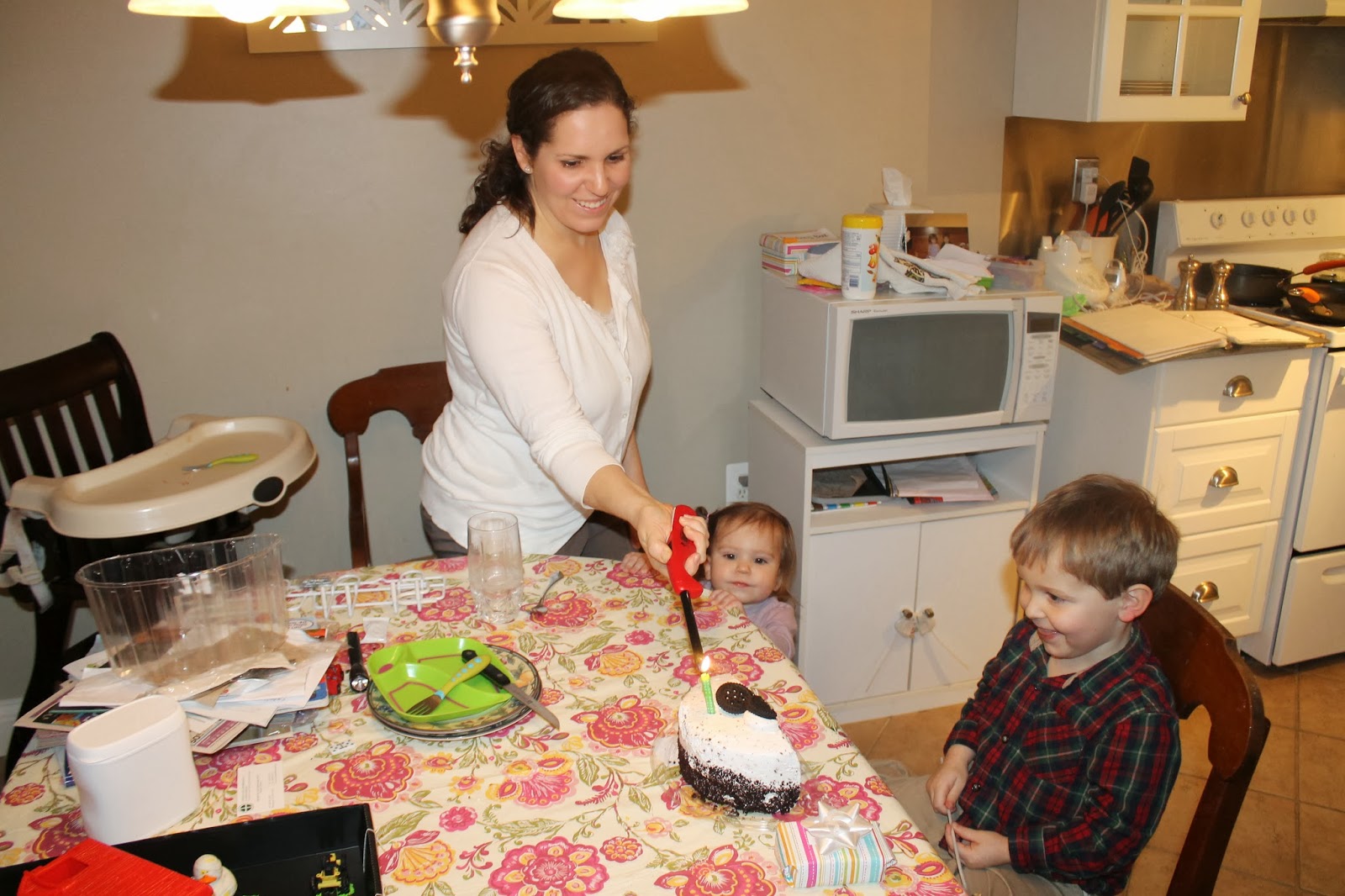 Philip is starting to get into having friends and wanting kids over for play dates. Of course, he usually doesn't interact with kids on play dates, but he likes to have them over. He has made up an imaginary friend that he named Seda. Seda sometimes comes over to play in the basement. He usually says things that Philip wants to say. "Seda wants a lollipop." "Daddy said Seda didn't have to go today." Seda and his friends Ena and Boinky were in need of a lot of rescuing last week.  Philip is also telling me often that there are noises in the basement and that there is a big birdie in the basement. He talks about monsters sometimes. Luckily at this point, he doesn't seem to be scared of these things, he just thinks they are fun to talk about. 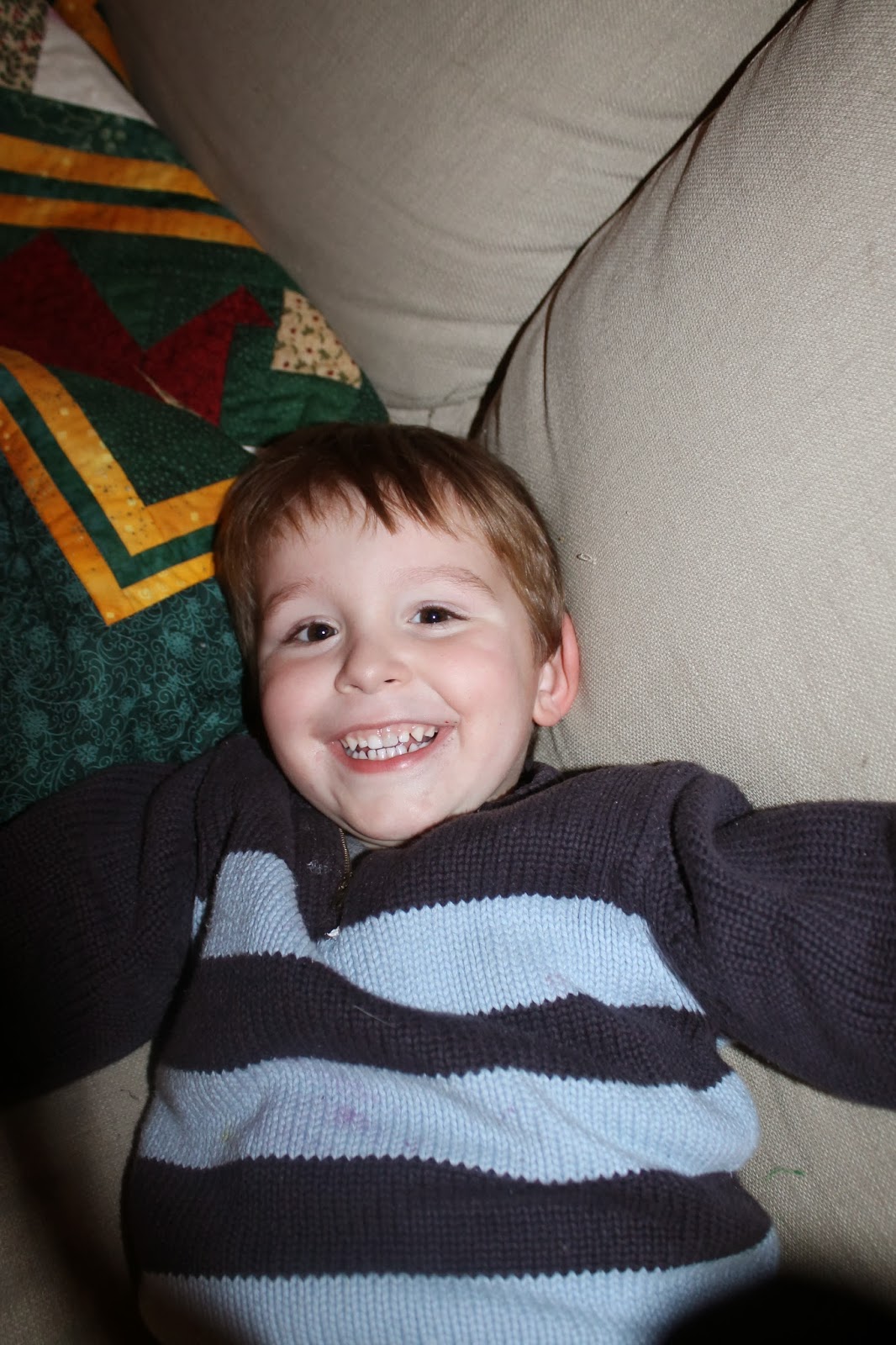 Sweet quote of the month: "Through Christ our love. Amen." 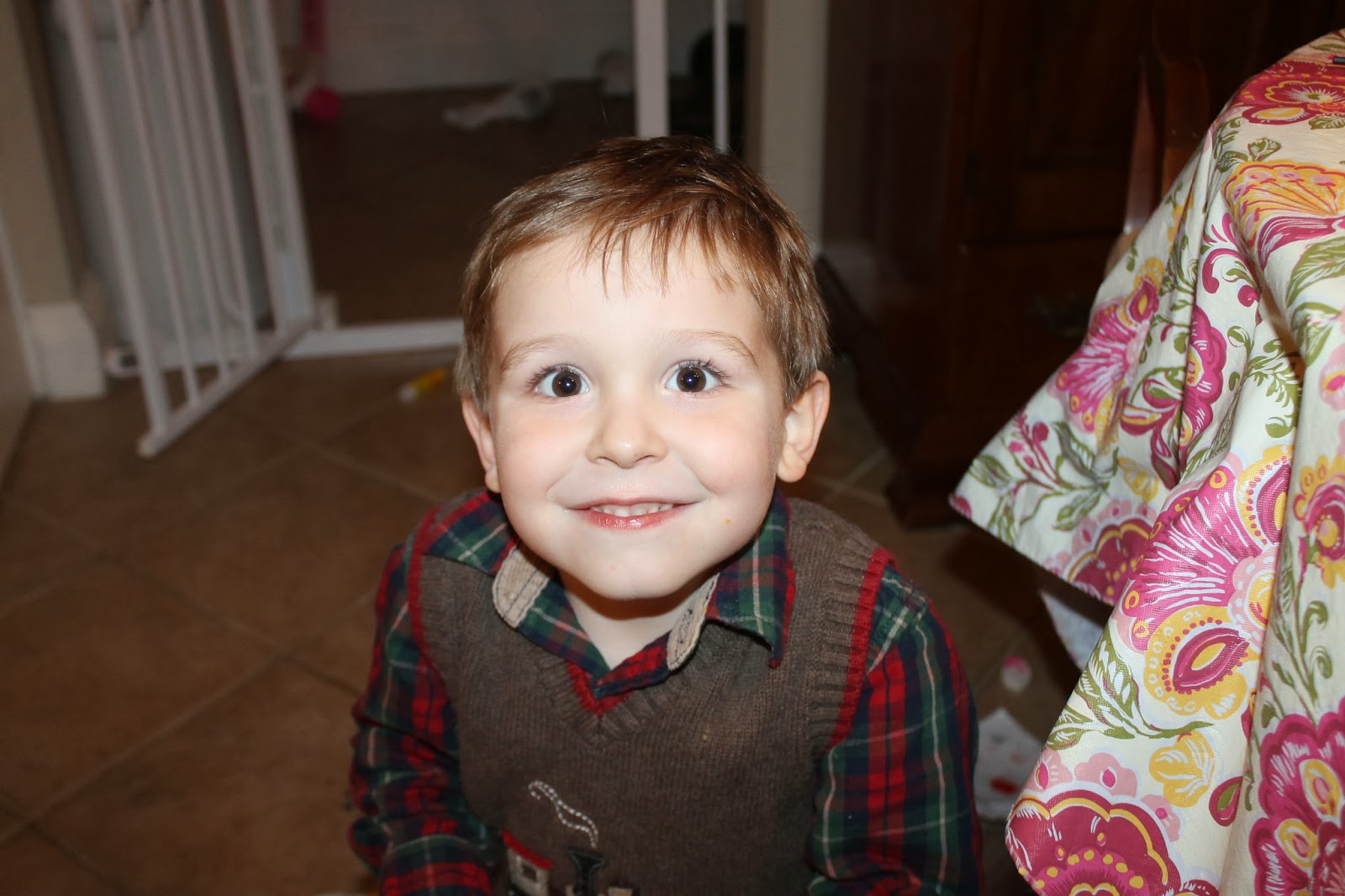 Julia got a pretty nasty virus this month (not the stomach variety, luckily). She only had one really bad, lethargic day, but was sick for about a week. I kept waiting for the rest of us to contract it, but luckily we never did! Julia also got her fourth molar. 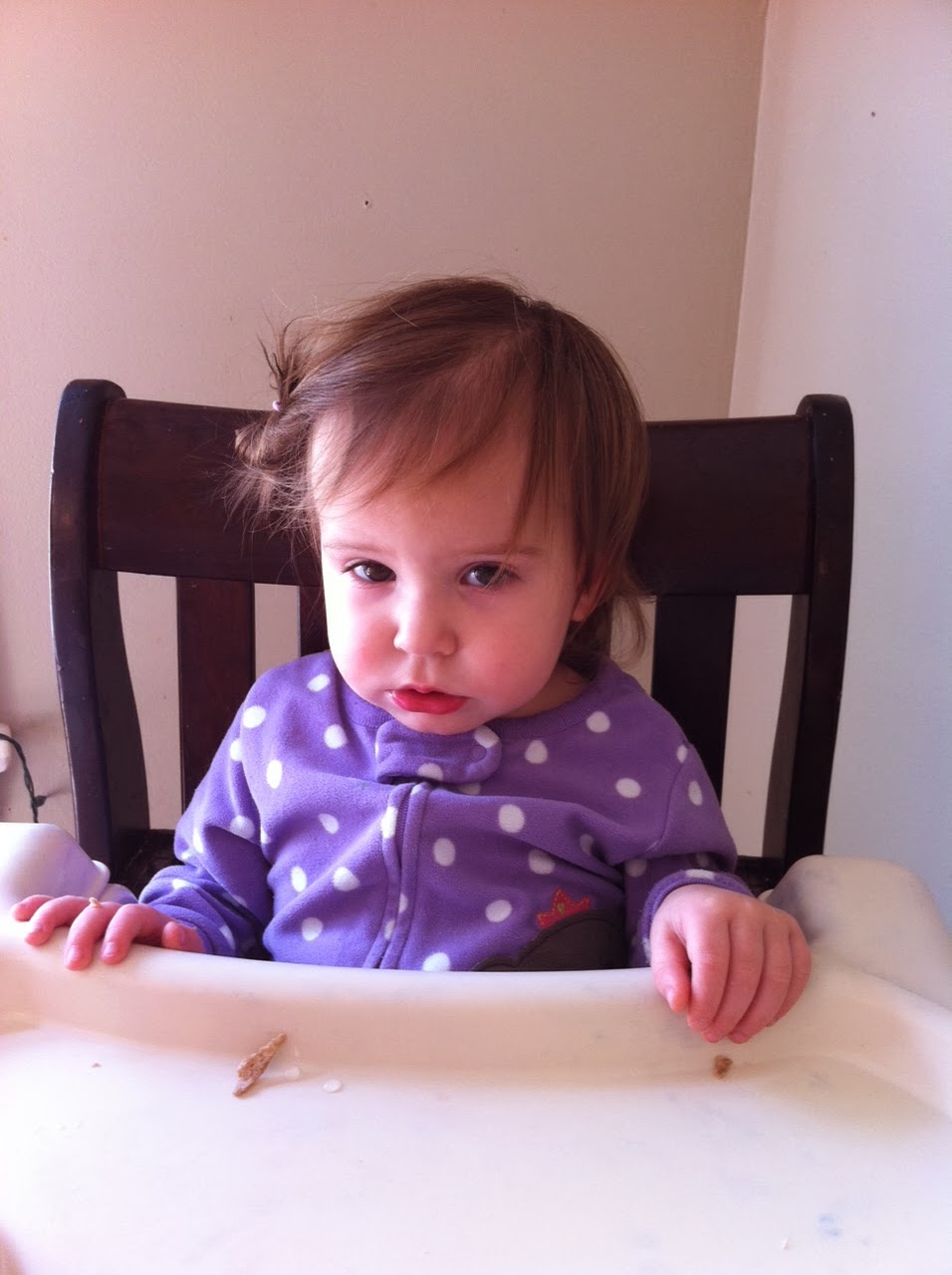 After months of a teething drought, they have been coming in fast and furious the last few months. She is down to only four more teeth and I say, bring it on! The sooner we can get these teeth in, the sooner she (and I) will be able to have uninterrupted sleep at night. 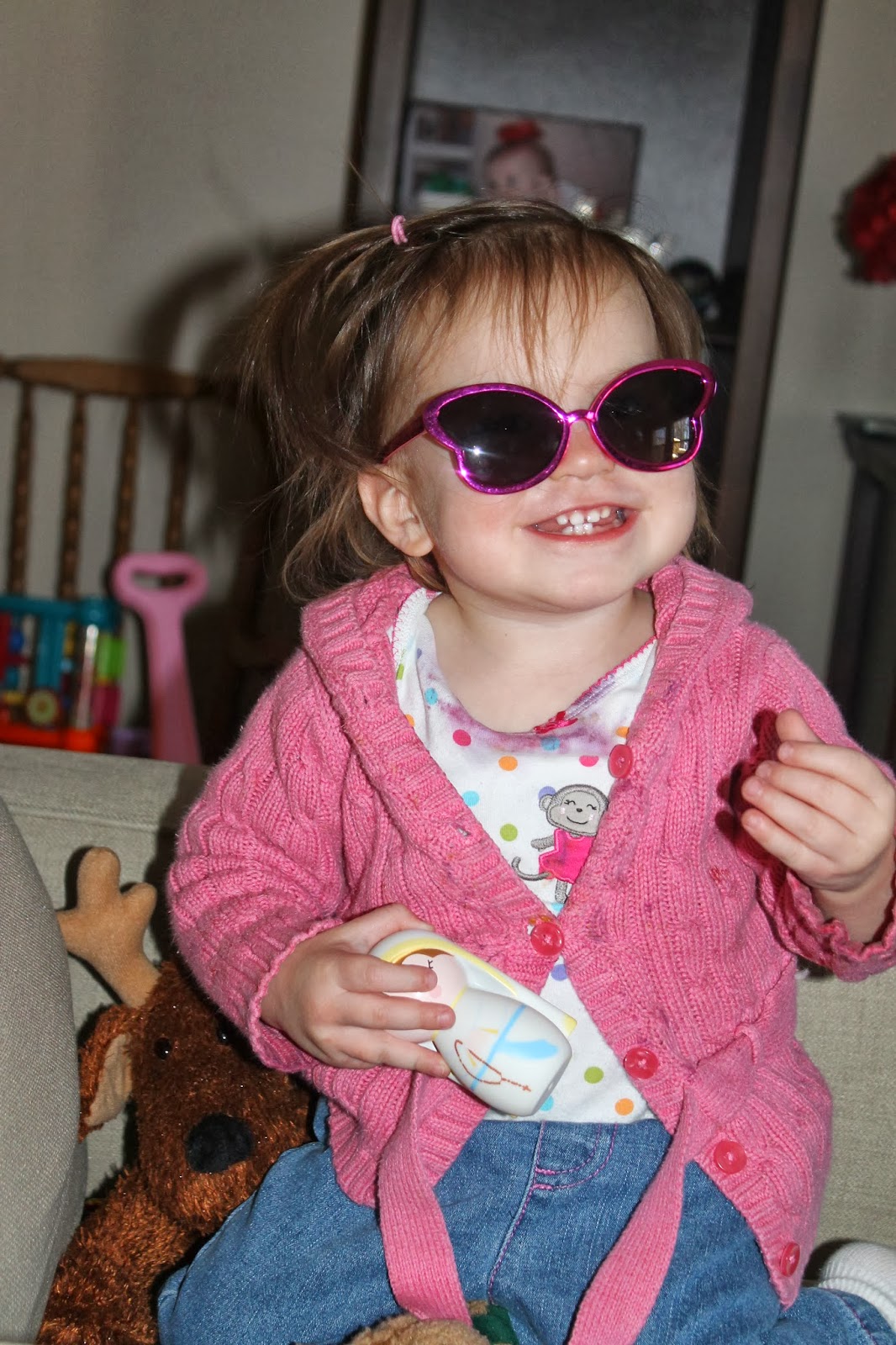 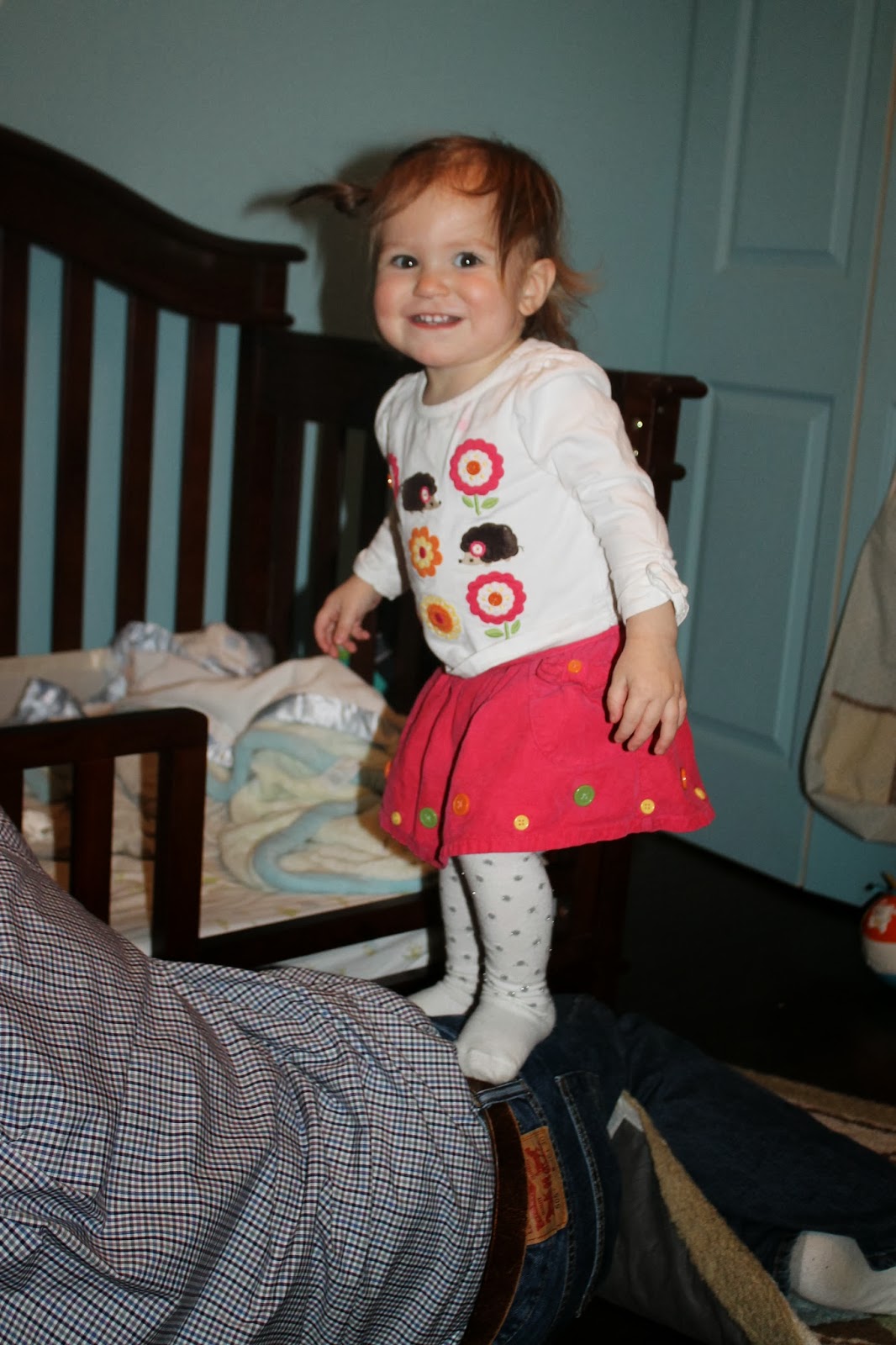 She has started to speak in three word sentences. We often hear, "I did it!" and "I got it!" She also often says, "Love you" Bless you", "Nigh nigh" "Where's Herbie/Daddy?" "I stuck" She calls Philip by his nickname, "Pup Pup." Andy taught her to say fun things like, "Awesome!"  Even though she has been saying yes and no for a while now, I am still taken aback when I hear her answer my questions with a "Yes." After having Philip who would never admit that he was tired and would throw a tantrum at the mere mention of a nap, I am always surprised when I ask her, "Are you tired?" or "Do you want to go to sleep." and she answers honestly, "Yes." Julia has a little alarm she sets off when she is upset. Amidst her incoherent babbling of complaints, you will hear her call out, "ding, ding, ding!" I love that little bell alarm that she sounds, hoping to draw attention to her plight. 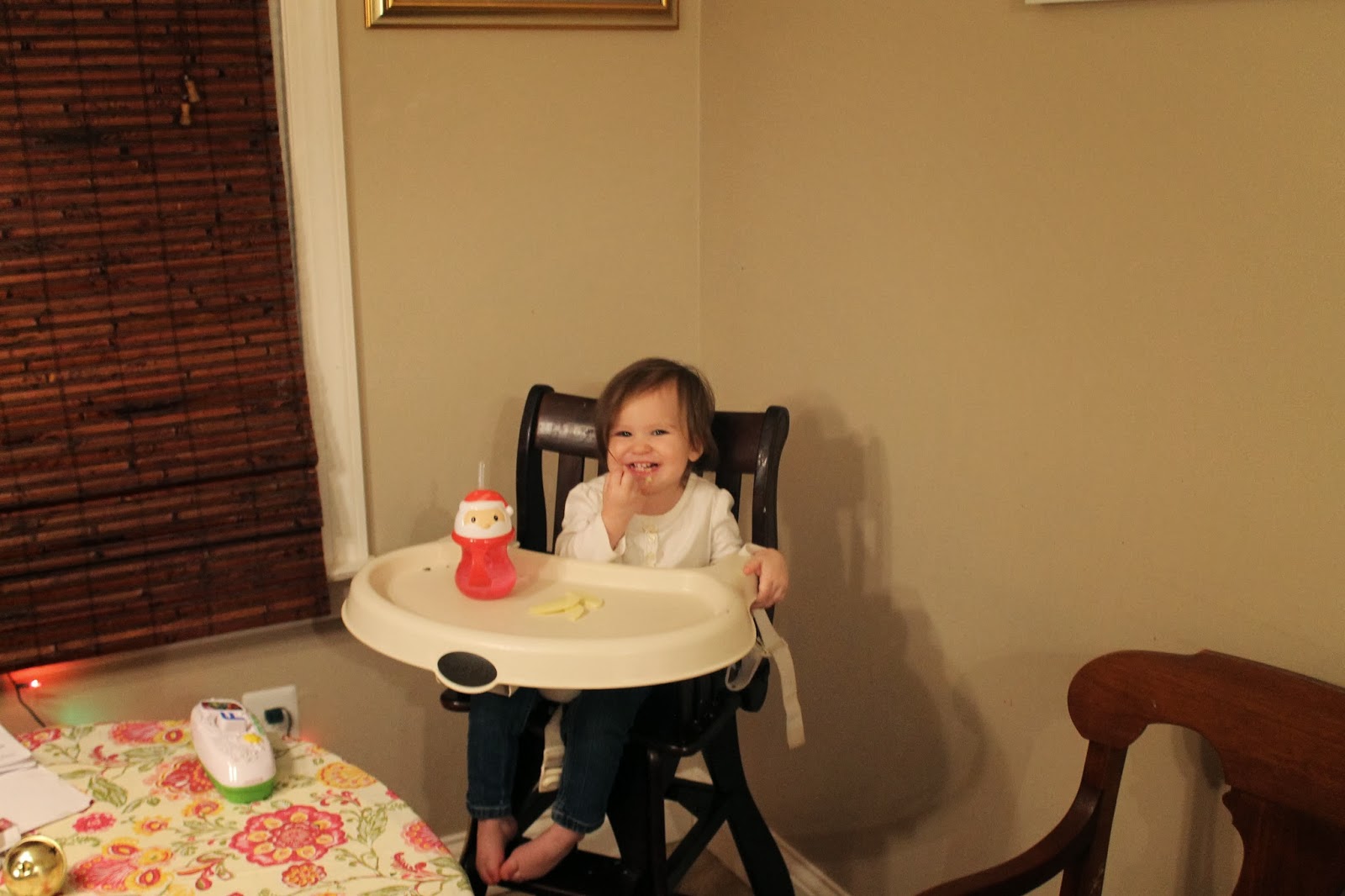 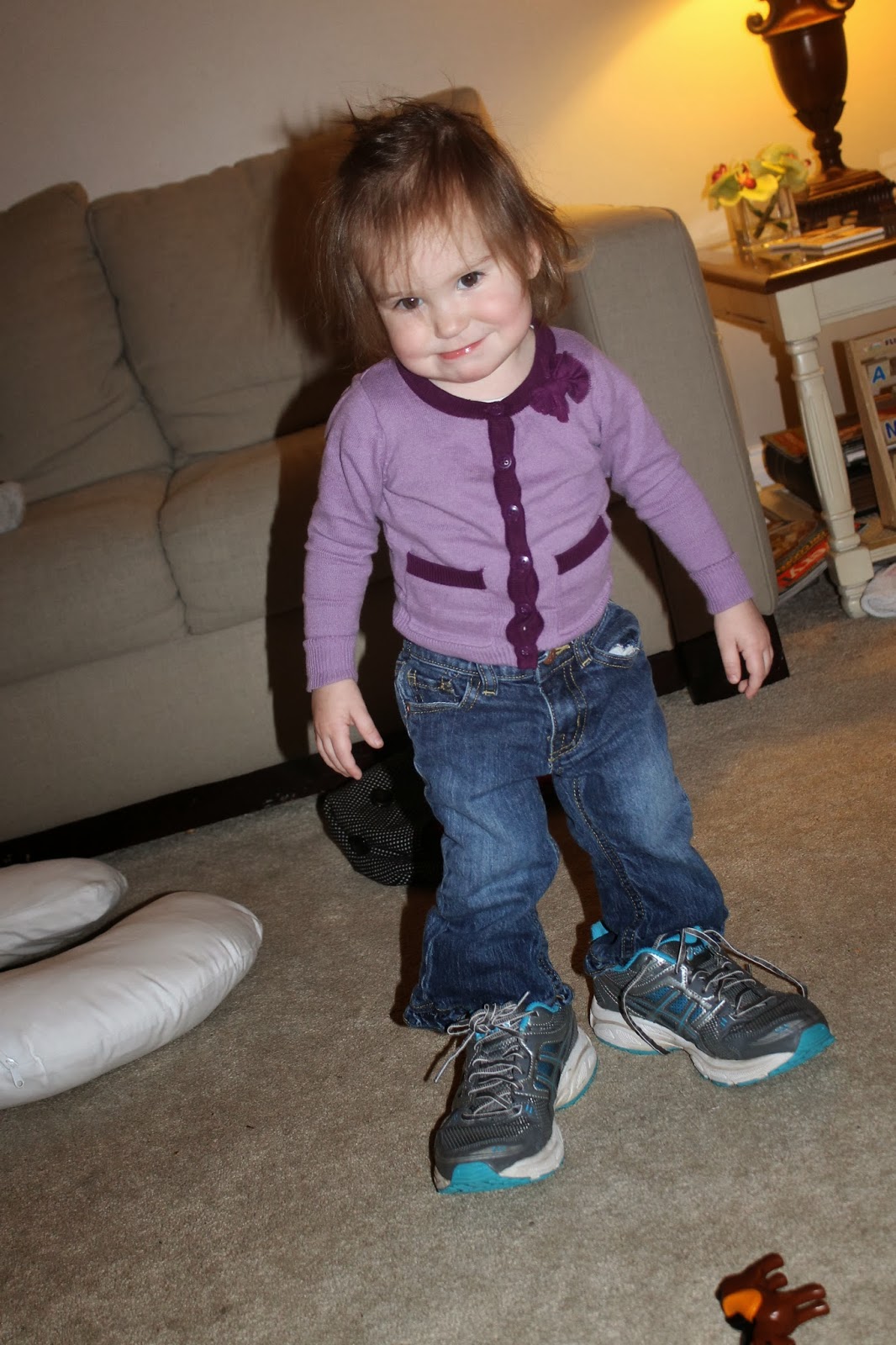 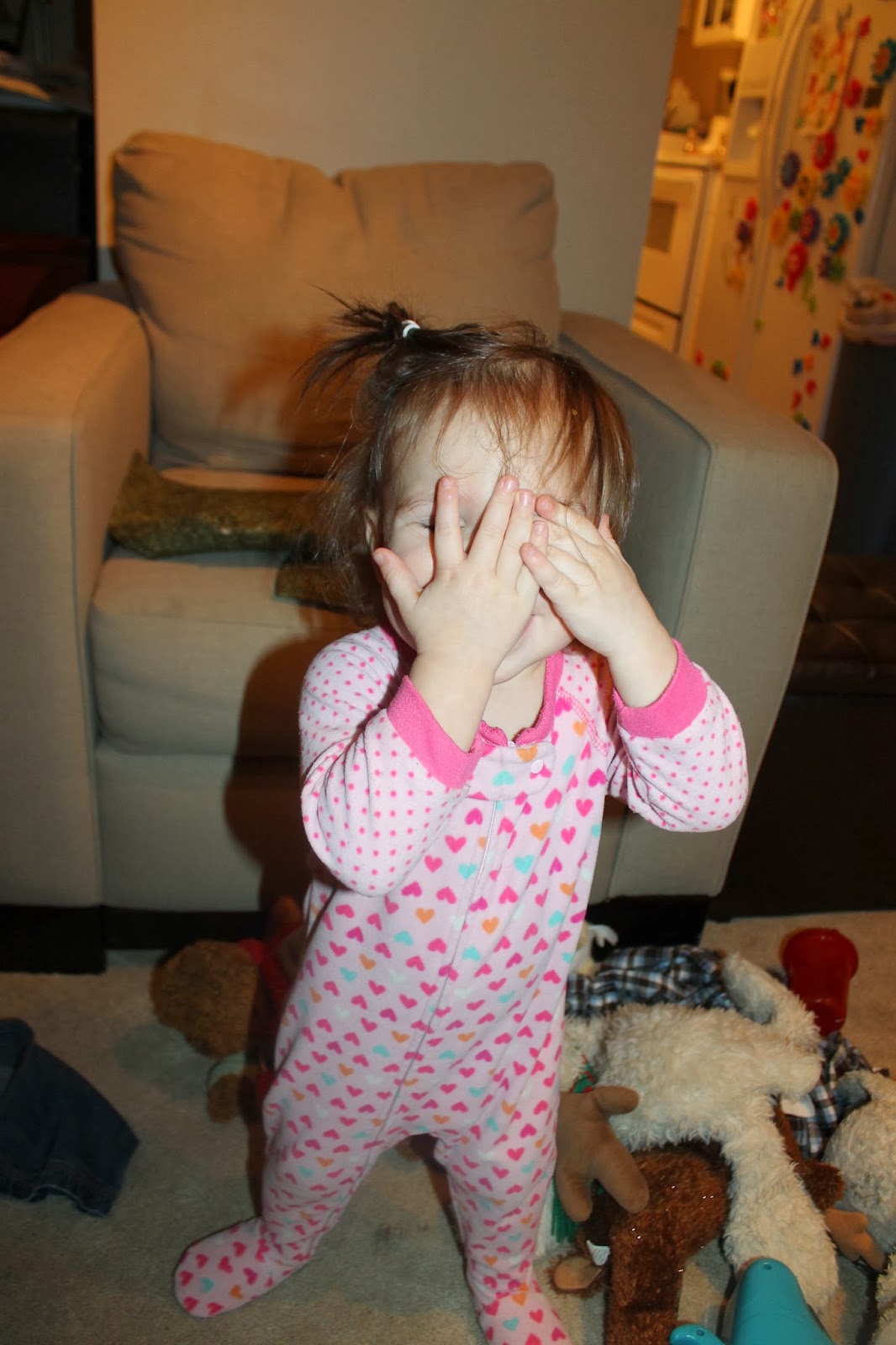 Julia playing peekaboo.
I can often stem off a tantrum by asking, "Where's Julia?"
She hides behind her hands like this.

Sweets of the month: She started saying "I love you" spontaneously. We just crossed that milestone with Philip this fall! 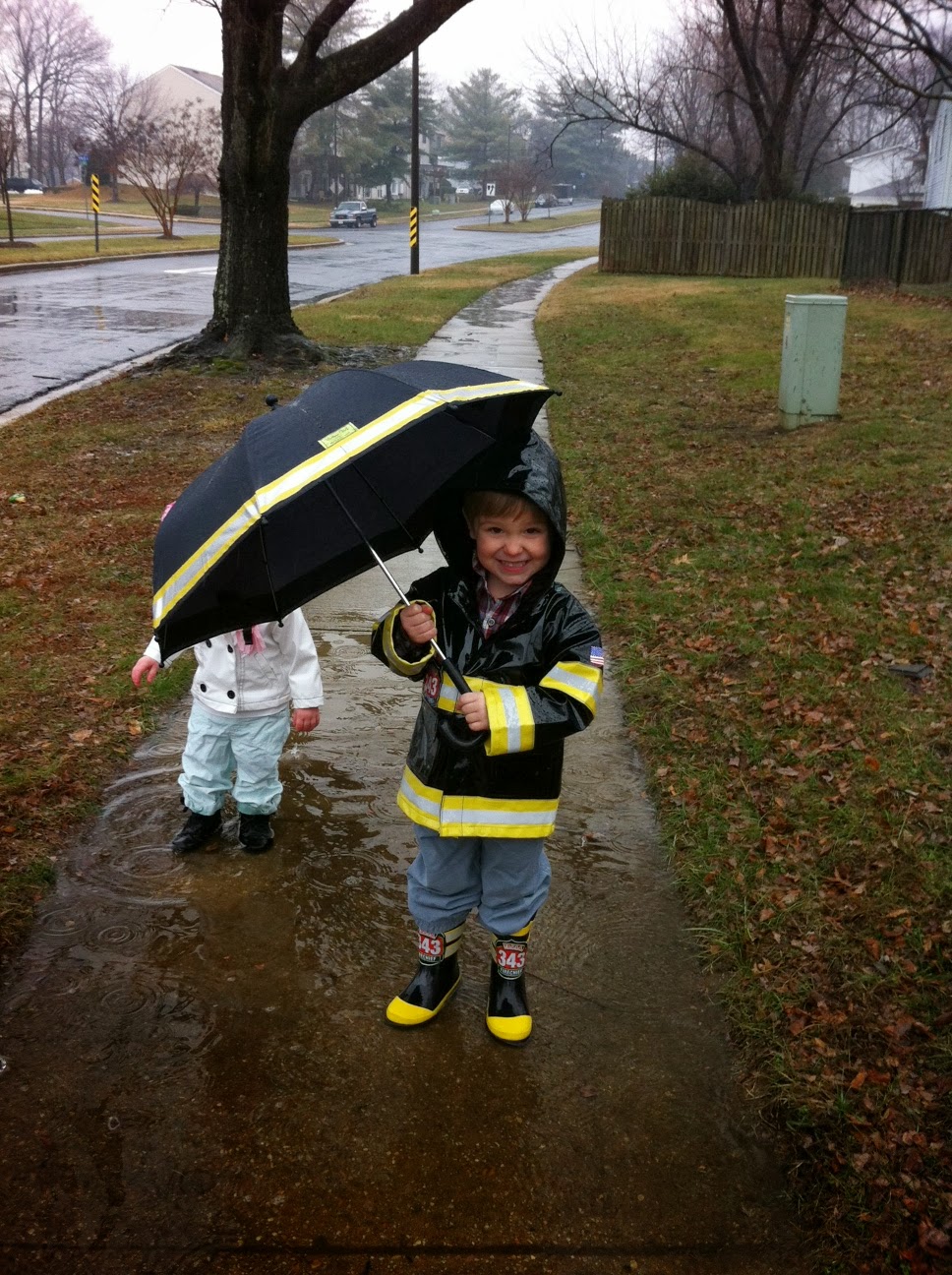 These kids love to go out in the rain to stomp in the puddles.

The kids are getting better at playing together now. Many mornings Julia will ask to stay downstairs with Philip while I take my shower. One afternoon while I was getting some things cleaned upstairs, they trotted into Philip's bedroom and played together for 10-15 minutes. I kept waiting to hear Julia cry, but they played very well together. When I asked Philip what they were doing, he told me, "We cracking ourselves up!" They are also partners in crime - usually this involves raiding the pantry when I forget to lock it. Yes, I had to lock the pantry because of a certain little boy... There are still many conflicts each day, but it is nice to have them interacting positively a bit more now. 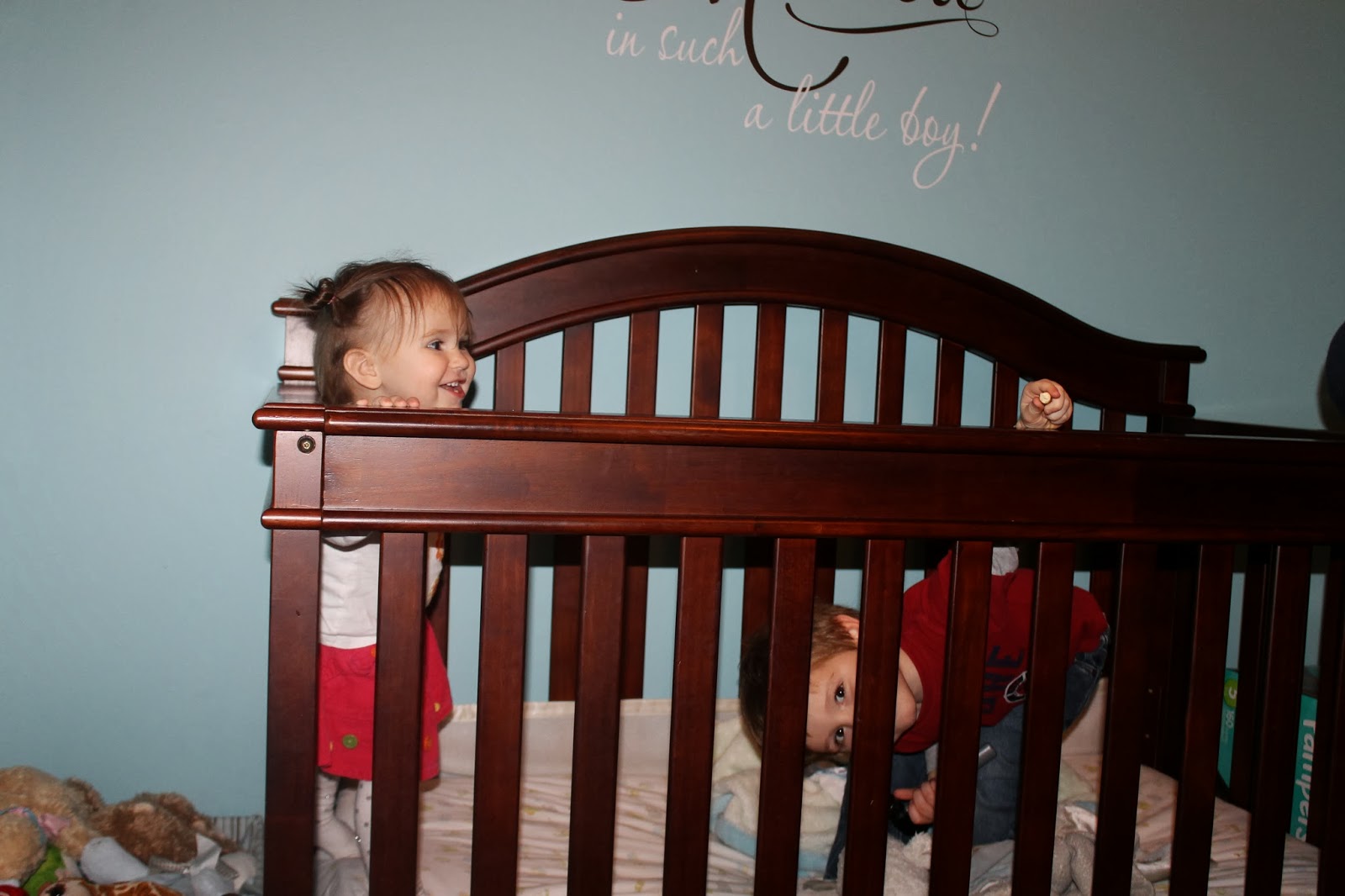 That's the news for now!