Last month we talked about the letters H and I. Here are some of the things we did.
Letter H
Mystery Box: 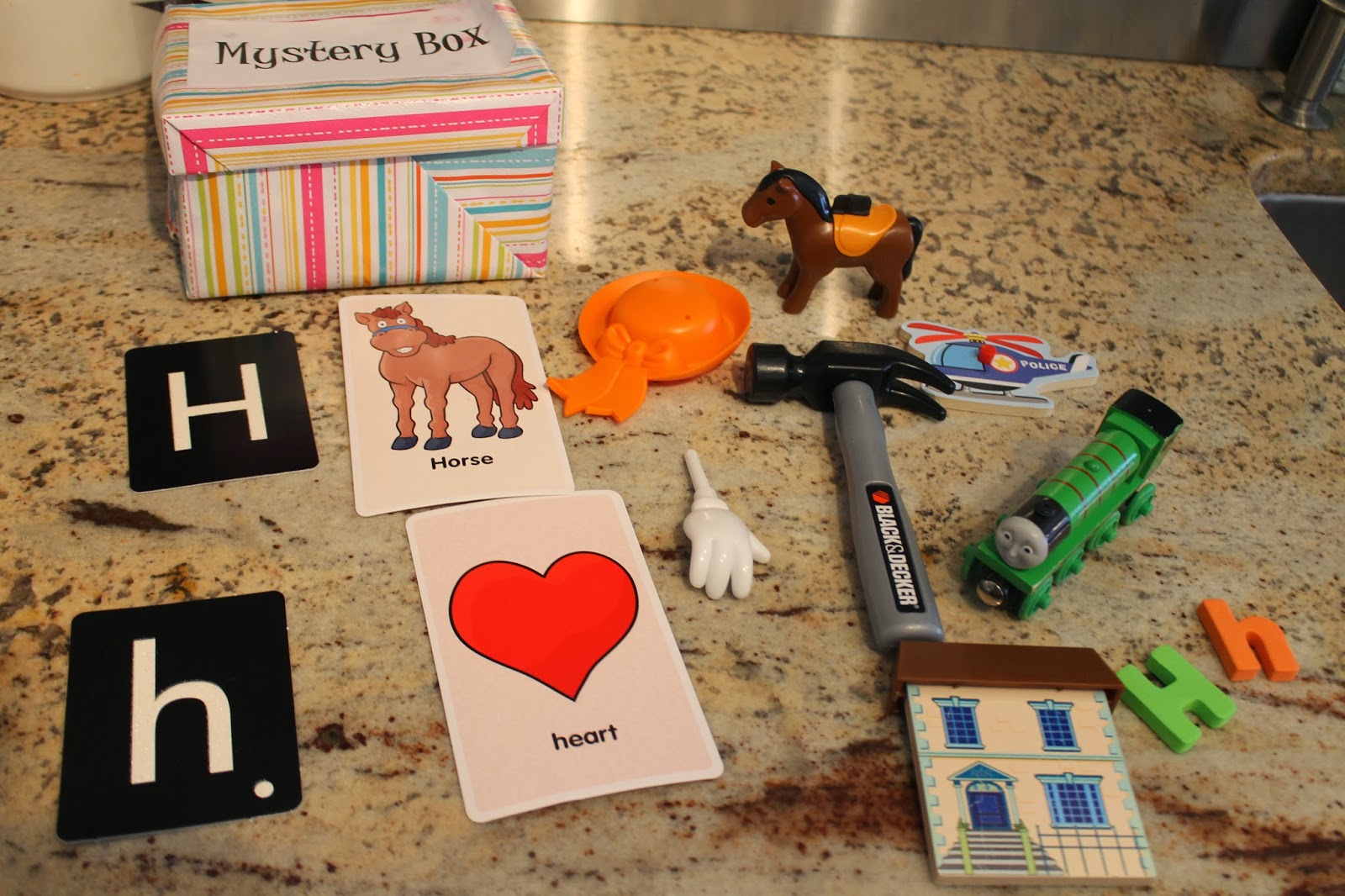 Horse, hat, hand, hammer, helicopter, house, and Henry the train. (He didn't like Henry being in the mystery box and put him back with the other trains right away.)
Books we Enjoyed:
A House for Hermit Crab by Eric Carle
Harold and the Purple Crayon by Crockett Johnson
Harold and the Purple Crayon: Dinosaur Days by Liza Baker
Henry Builds a Cabin by D.B. Johnson
Hooray for Diffendoofer Day! by Dr. Seuss
Horton Hears a Who and Horton Hatches the Egg by Dr. Seuss
Hand, Hand, Fingers, Thumb by Al Perkins
Hairy McClary from Donaldson's Dairy by Lynley Dodd
Hickory Dickory Dock by Keith Baker
We Were Tired of Living in a House by Liesel Skorpen
Curious George Goes to the Hospital by Margret Rey
We also read the Little Letter "H" Book during a couple meals.
Food we Ate:
Ham for lunch and hot dogs for dinner on the weekend. 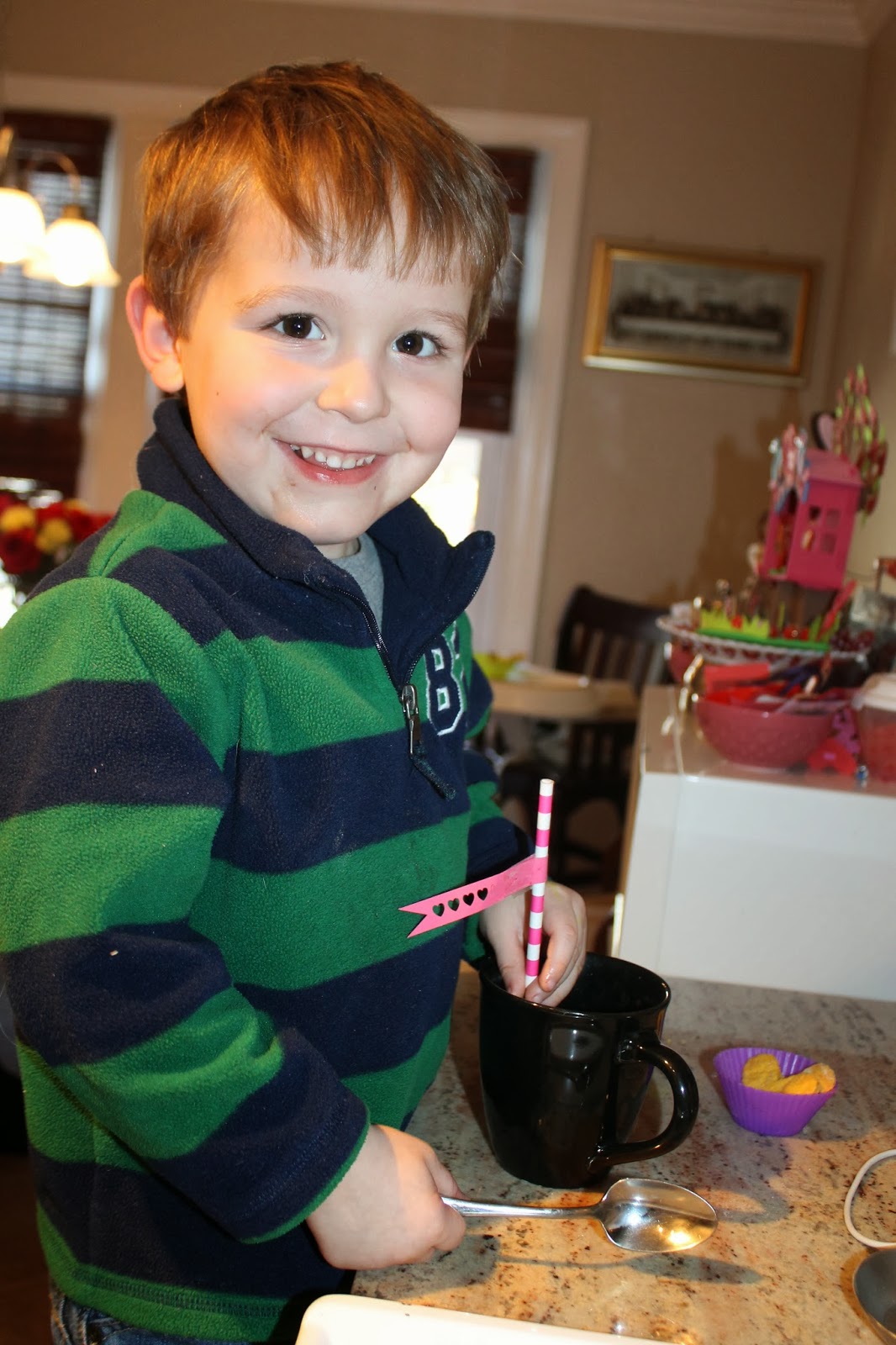 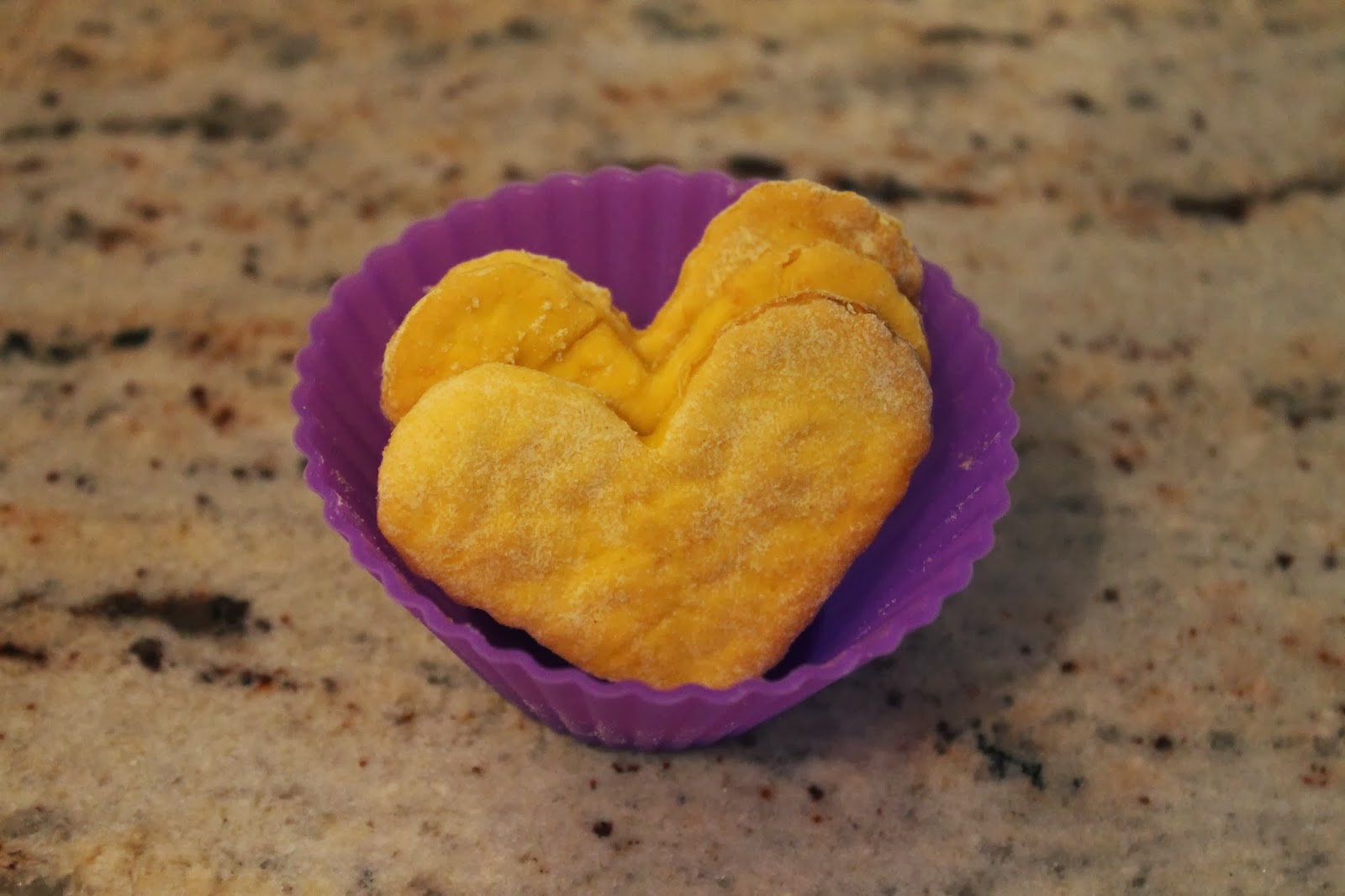 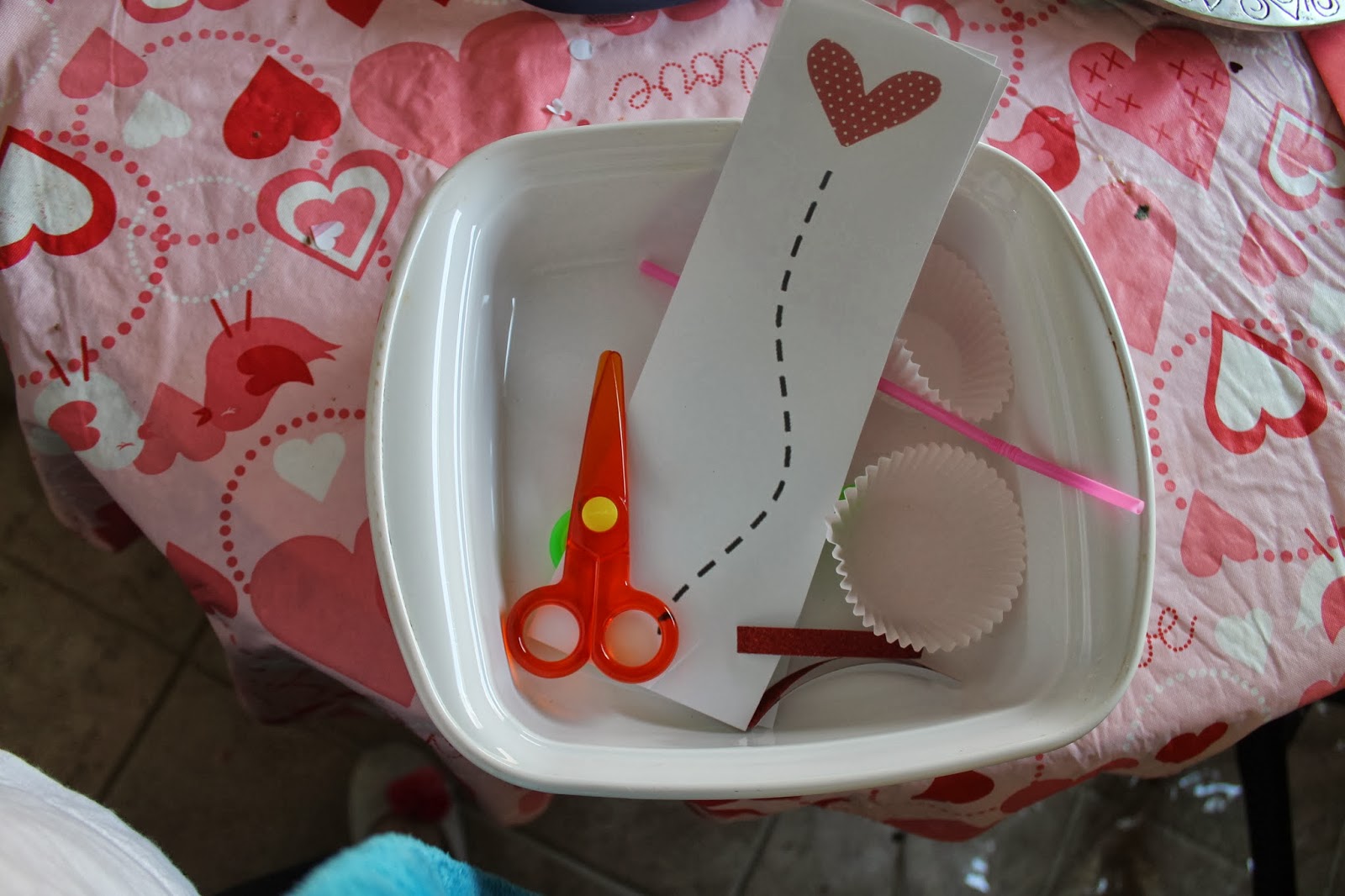 I made him a cutting tray with several different materials he could practice cutting. 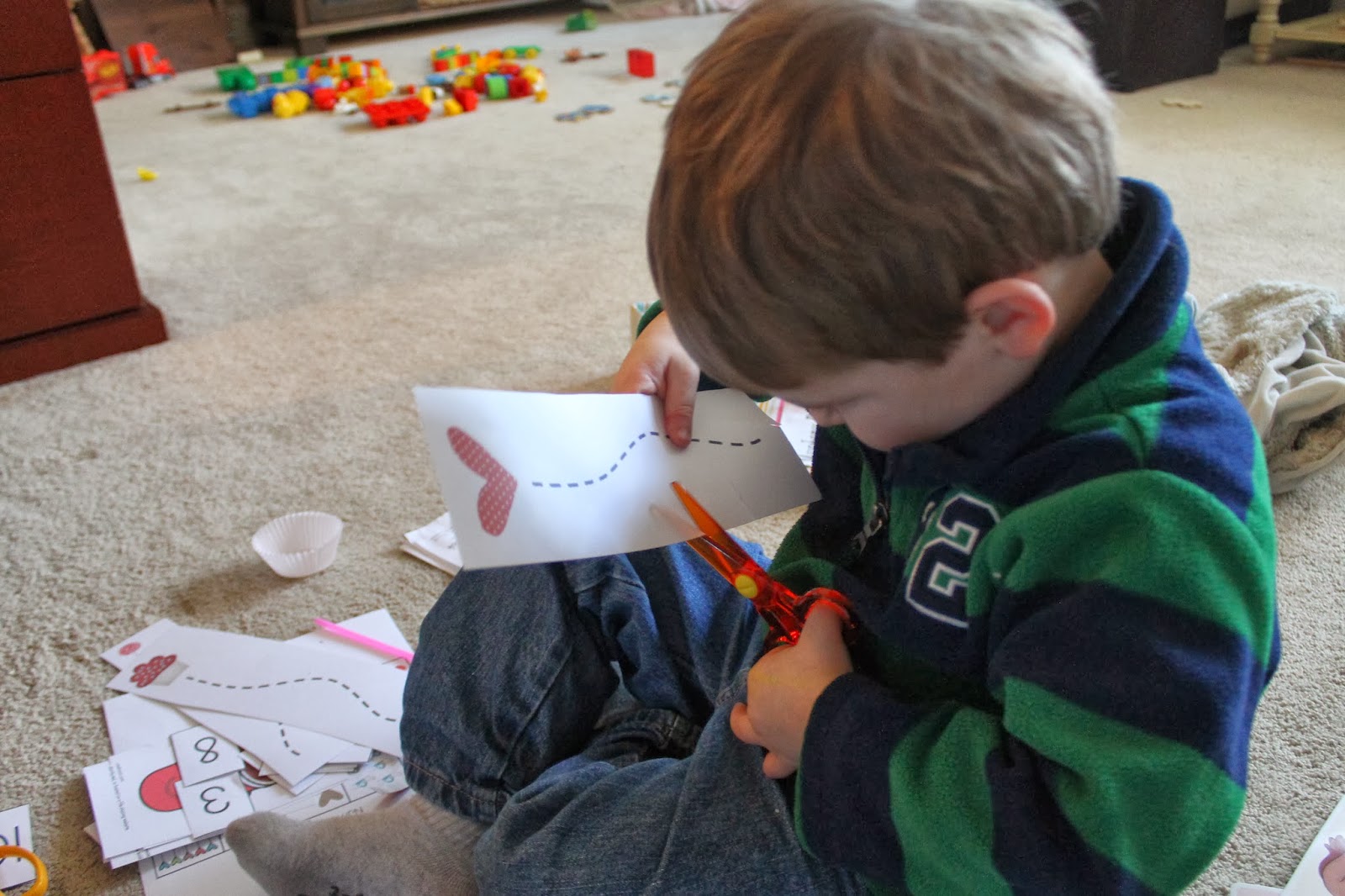 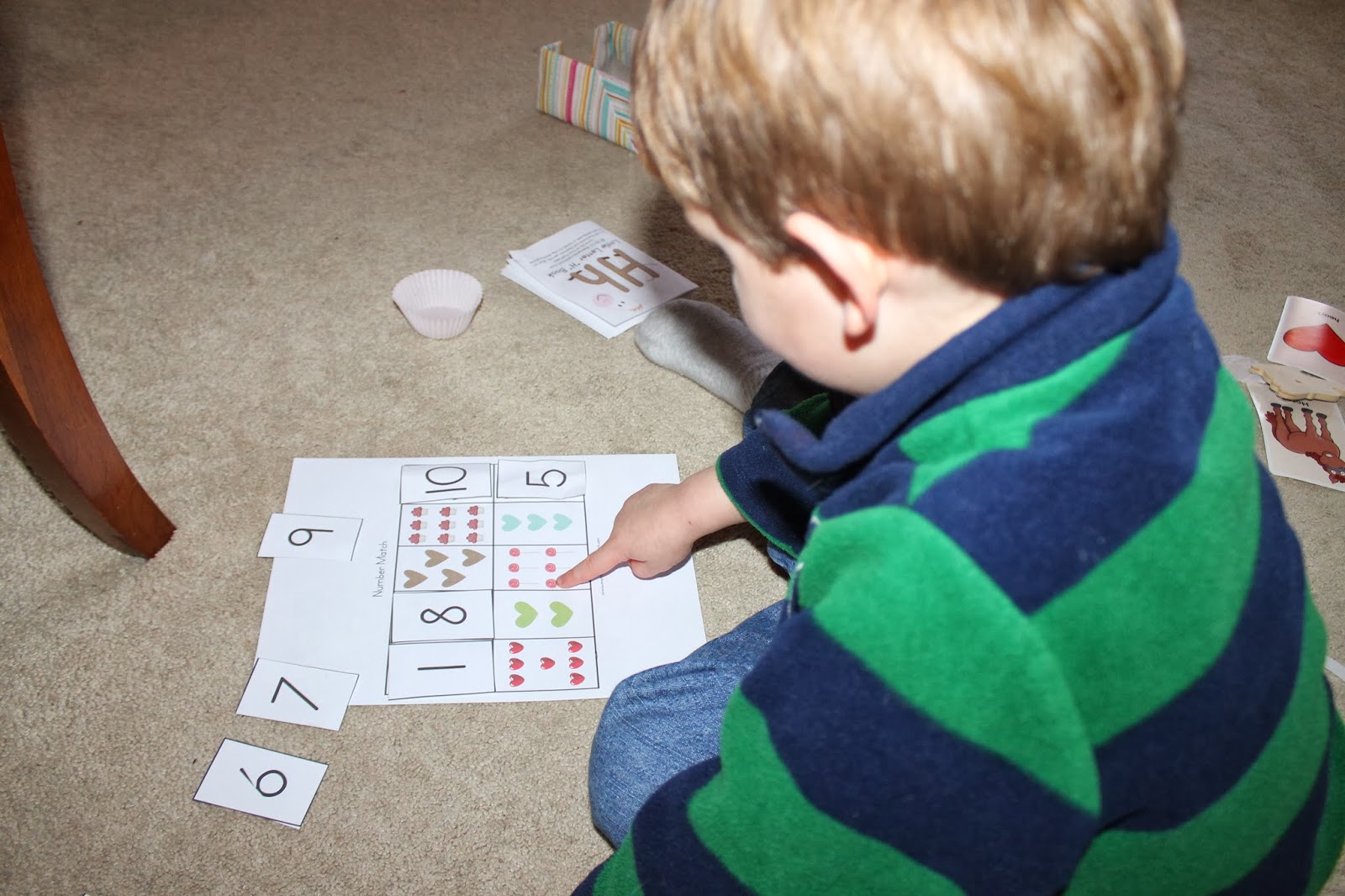 Heart math - he counted the number of images in each square and put the appropriate number on top.
Hot cocoa counting mats: 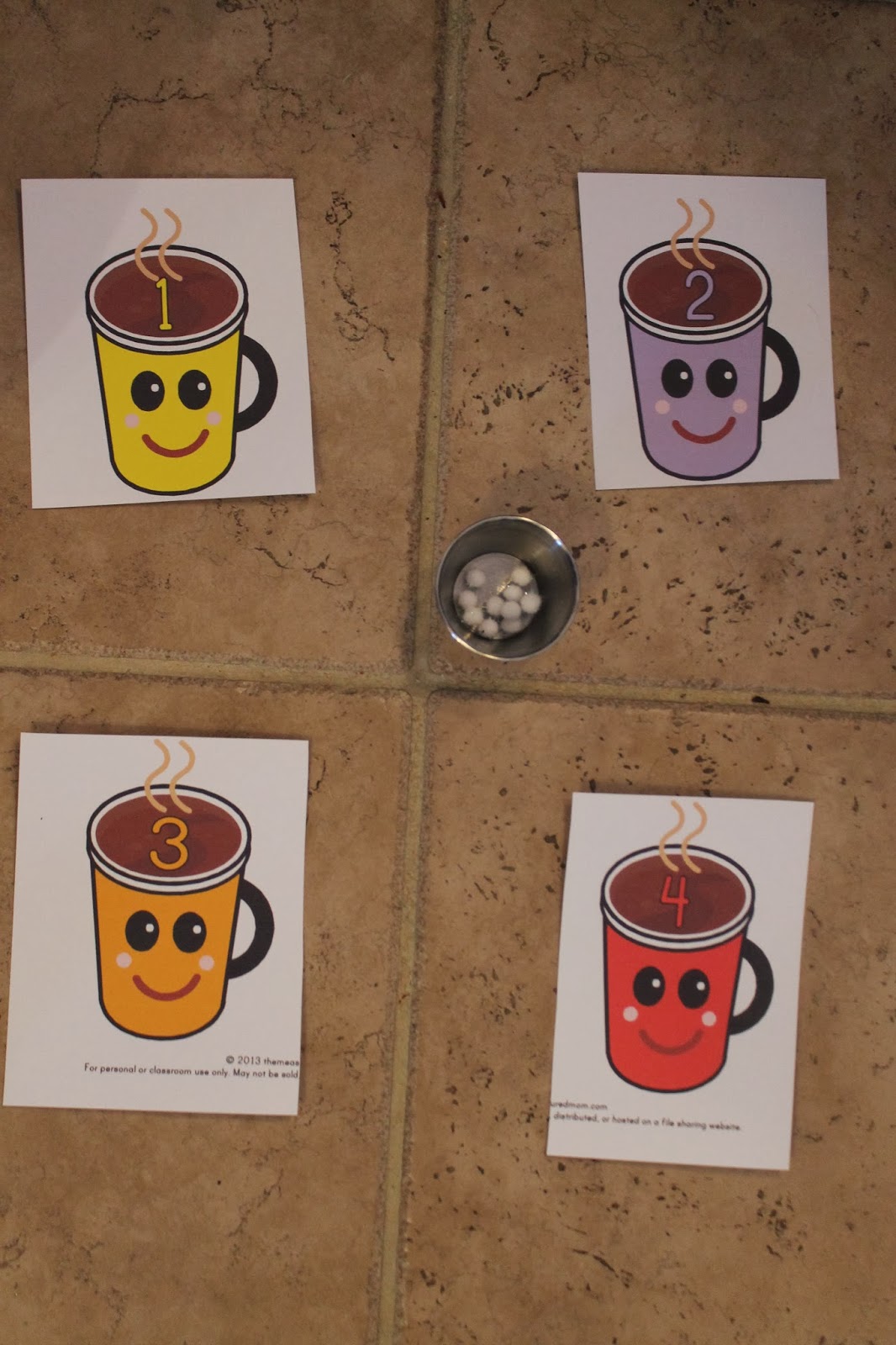 He placed the appropriate number of marshmallows (white puff balls) in the mugs. We built a house out of bricks and mortar. The mortar was shaving cream. 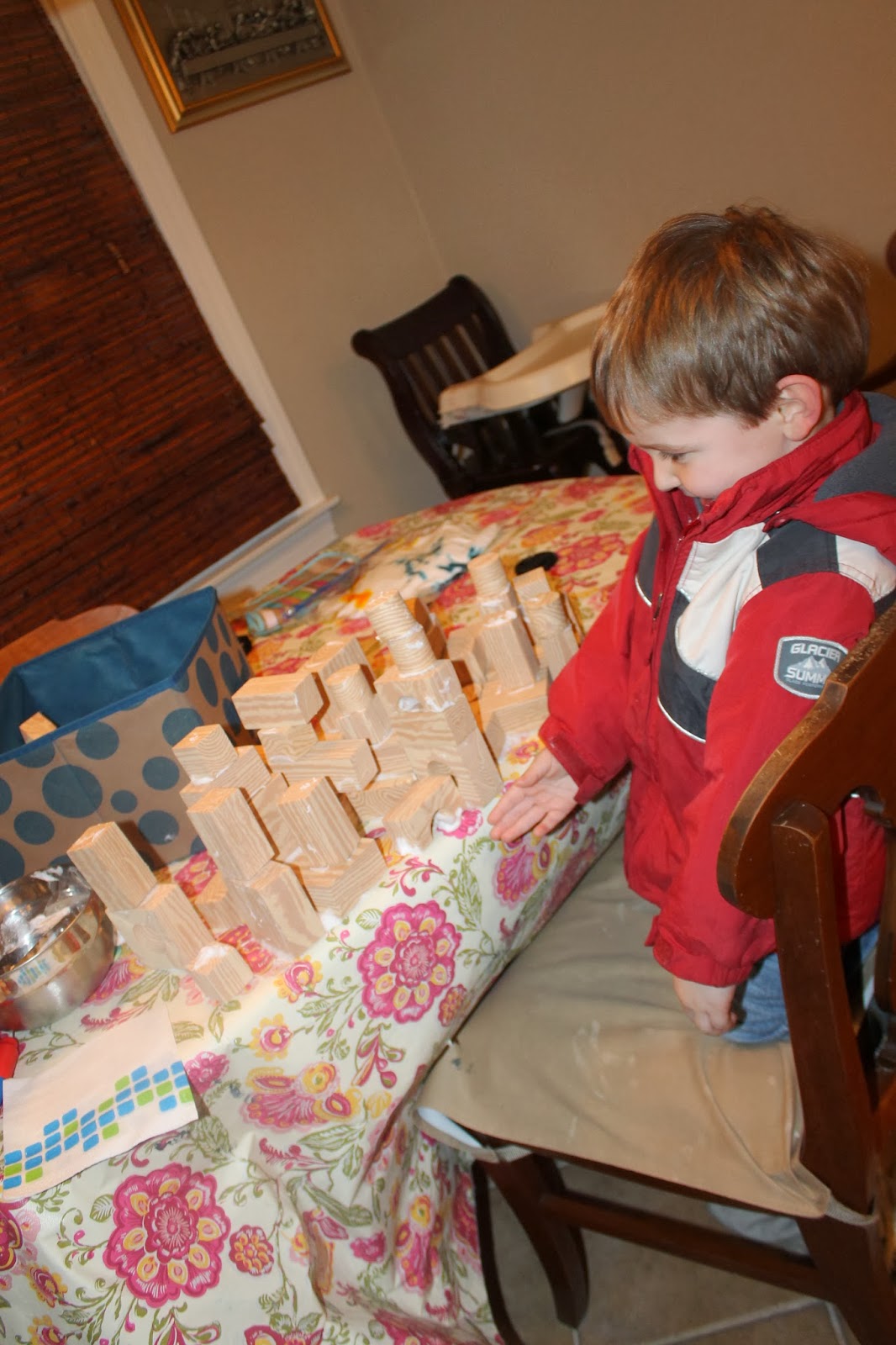 He loved this and we did it a few days in a row. 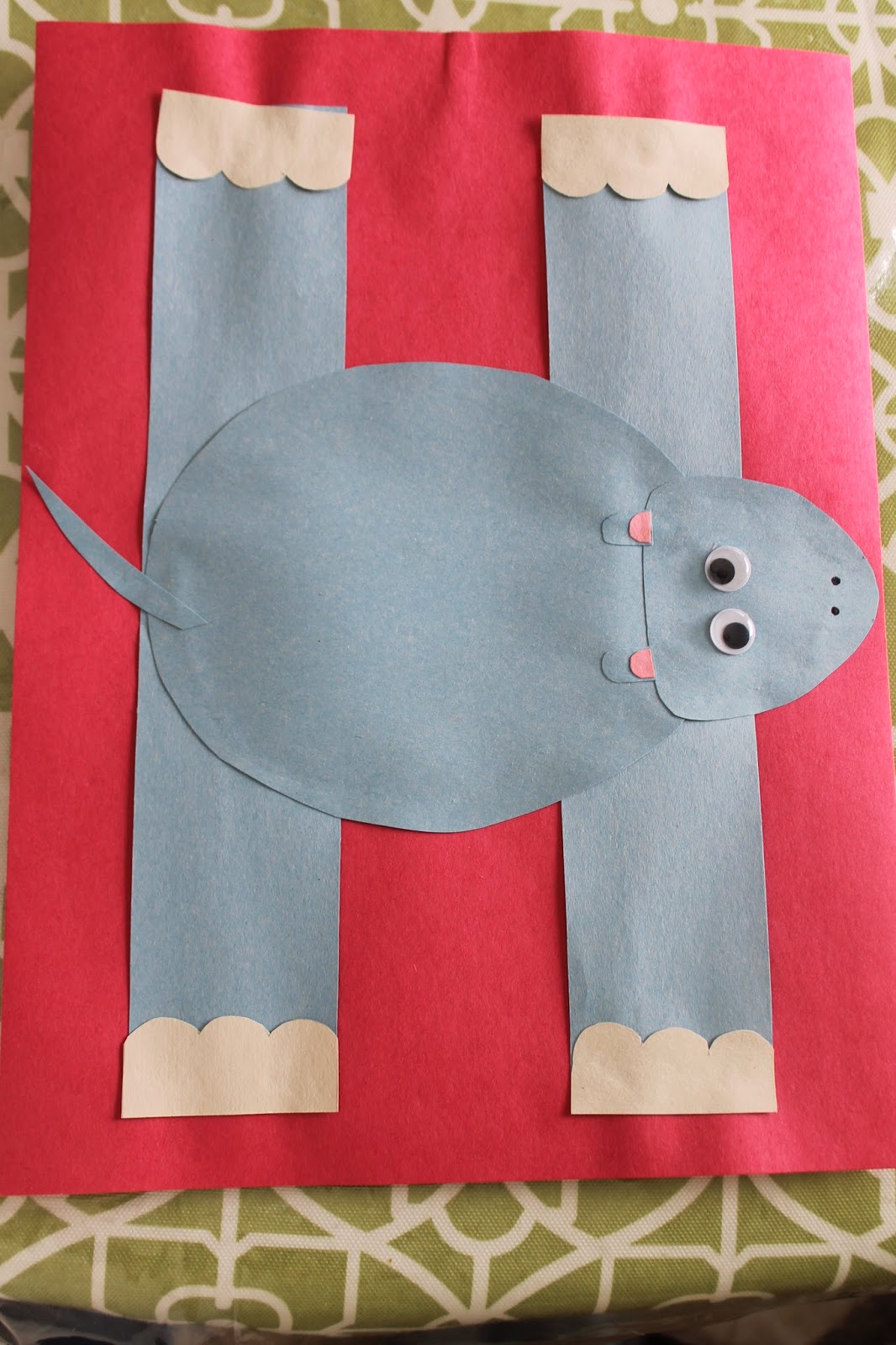 
Mystery Box: Igloo, ice cube (plastic), an insect,  necklace from India, ice skates
Books we Enjoyed:
Inside, Outside, Upside Down by Stan Berenstain
Inch by Inch by Leo Lionni
Inch by Inch: The Garden Song by David Mallet
If you Give a Dog a Donut/Moose a Muffin/Cat a Cupcake/Pig a Pancake by Laura Numeroff
If you Take a Mouse to the Movies by Laura Numeroff
Imogene's Antlers by David Small
The Itsy Bitsy Spider by Iza Trapani
Building an Igloo by Ulli Steltzer
Look Inside an Igloo by Mari Schuh
Immi's Gift by David Mallet
The Little Letter "I" Book
Food we Ate:
Ice cream! 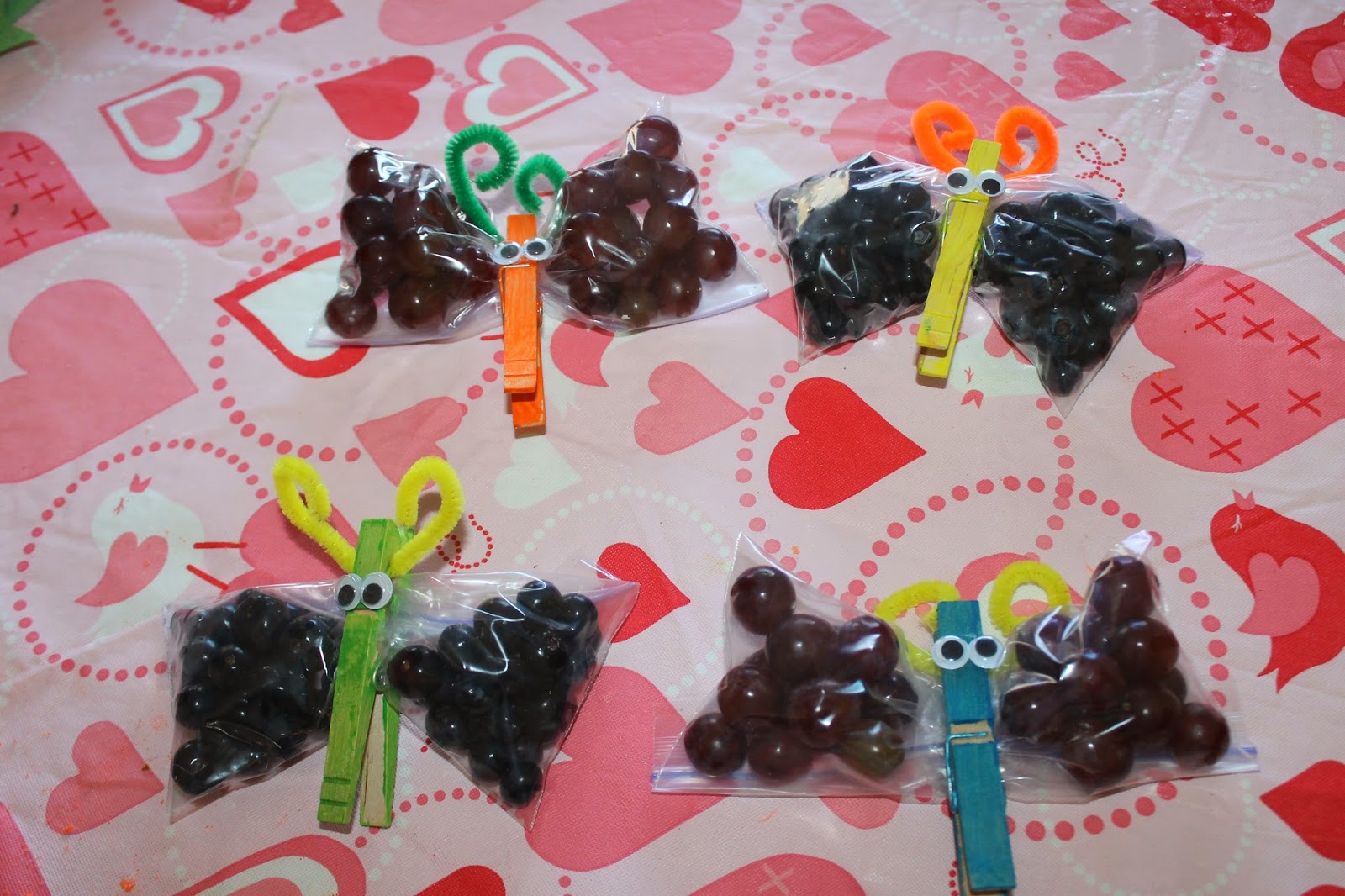 We made insect snack bags. I was going to surprise Philip with these, but he saw a picture of them on my tablet and wanted to do them right now! It turned out to be a great activity for us to do together. He picked out the colors and I painted the clothespins and glued on the googly eyes while he washed and packaged the fruit. He wanted to make four - one for each member of the family. I put different snacks in these throughout the week - fruit, cereal, Teddy Grahams. I kept the clothespins and antenna and use them for snacks every once in a while. Easy and fun to throw in the diaper bag!
Activities:
I pulled out our insect sensory bin. I made a bin for him last year and ended up putting it into a shoebox that we take out throughout the year when he asks for it. When Julia got up from her nap, she got to play with this bin for the first time, too. It include Easter grass, an Insect Toob, a magnifying glass, a net for catching the bugs, and a bug container. 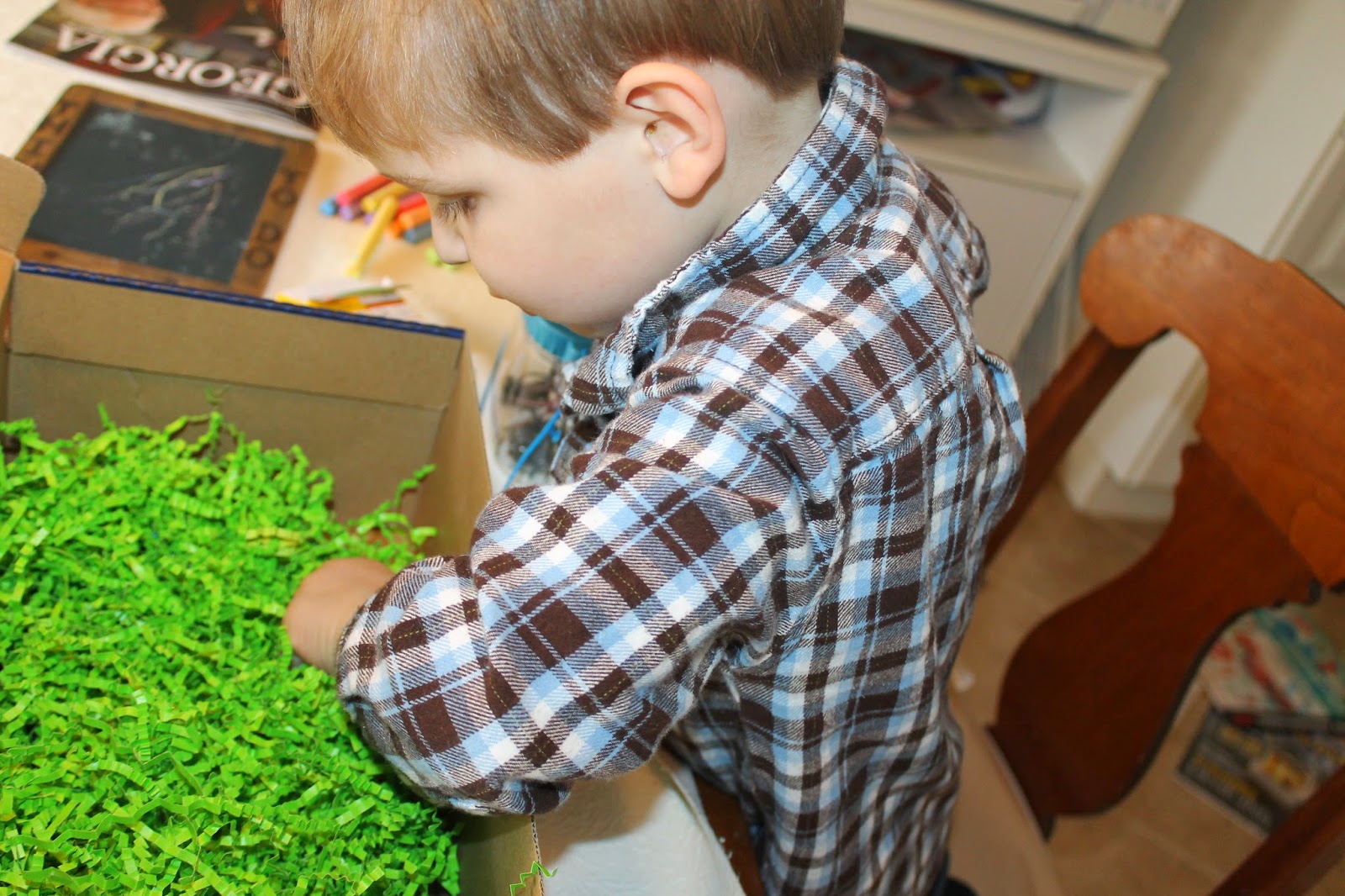 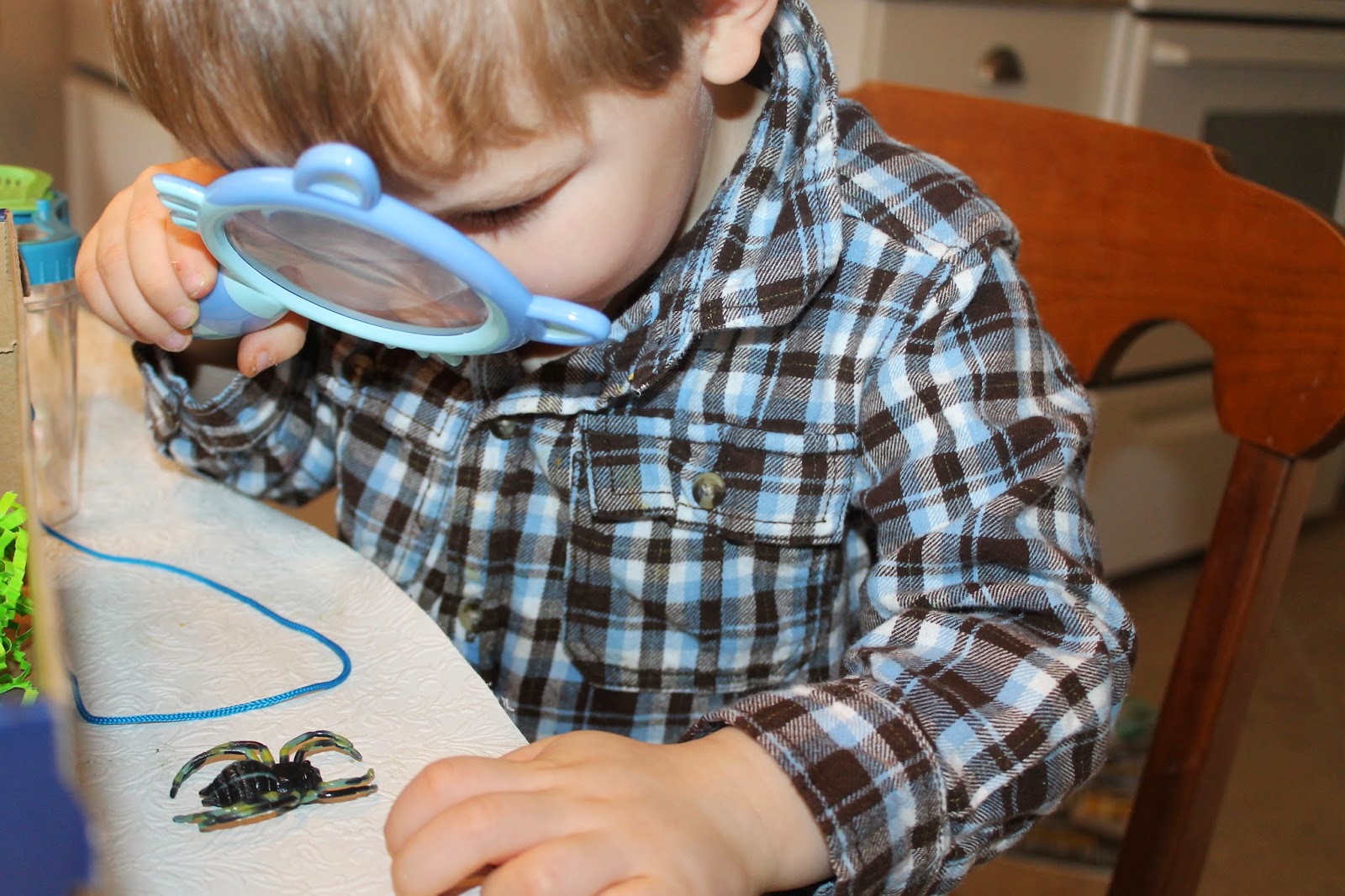 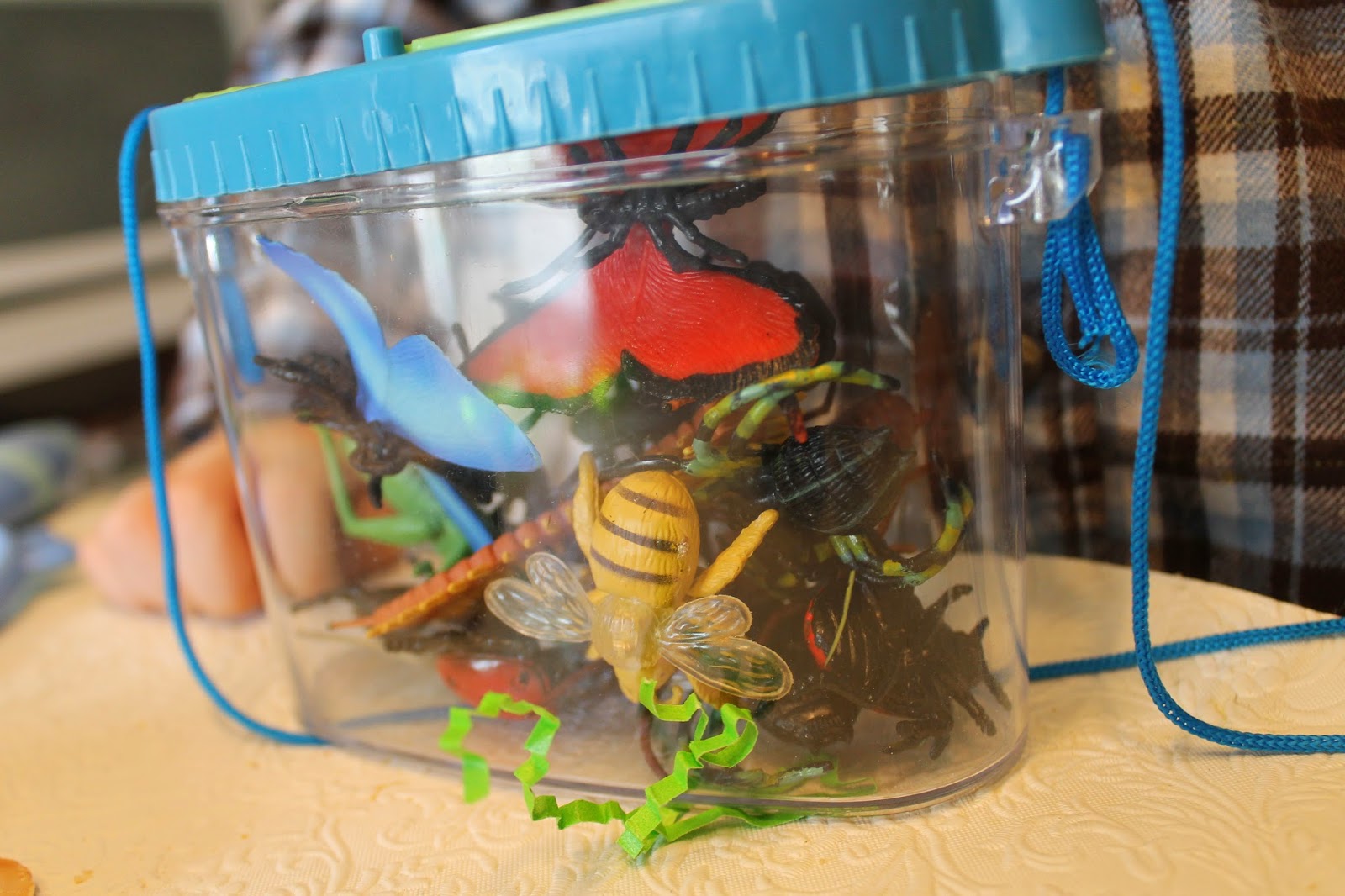 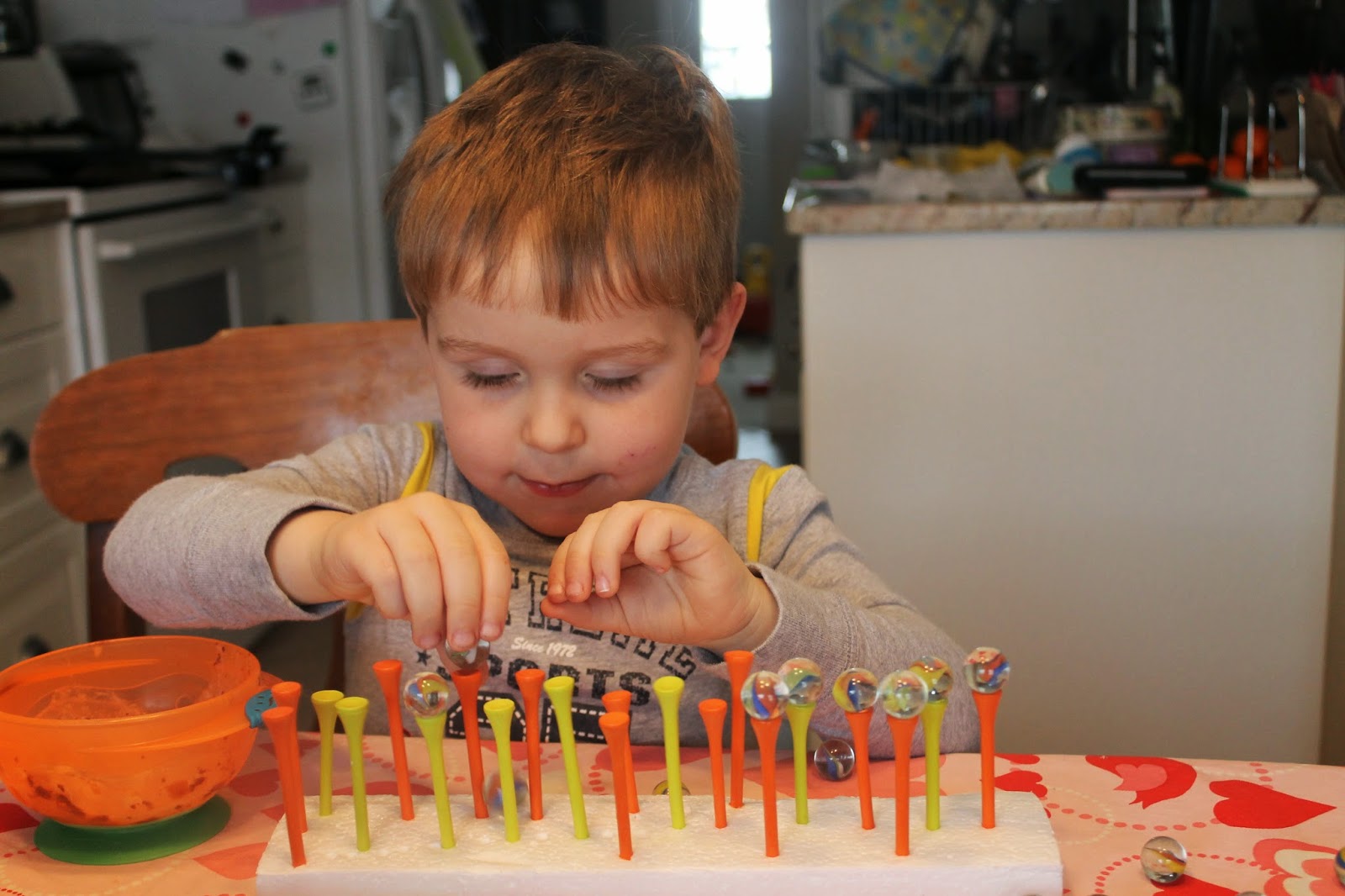 Dotting the letter I. We did this earlier in the year with blueberries instead of marbles and that was a big hit with my berry lover! 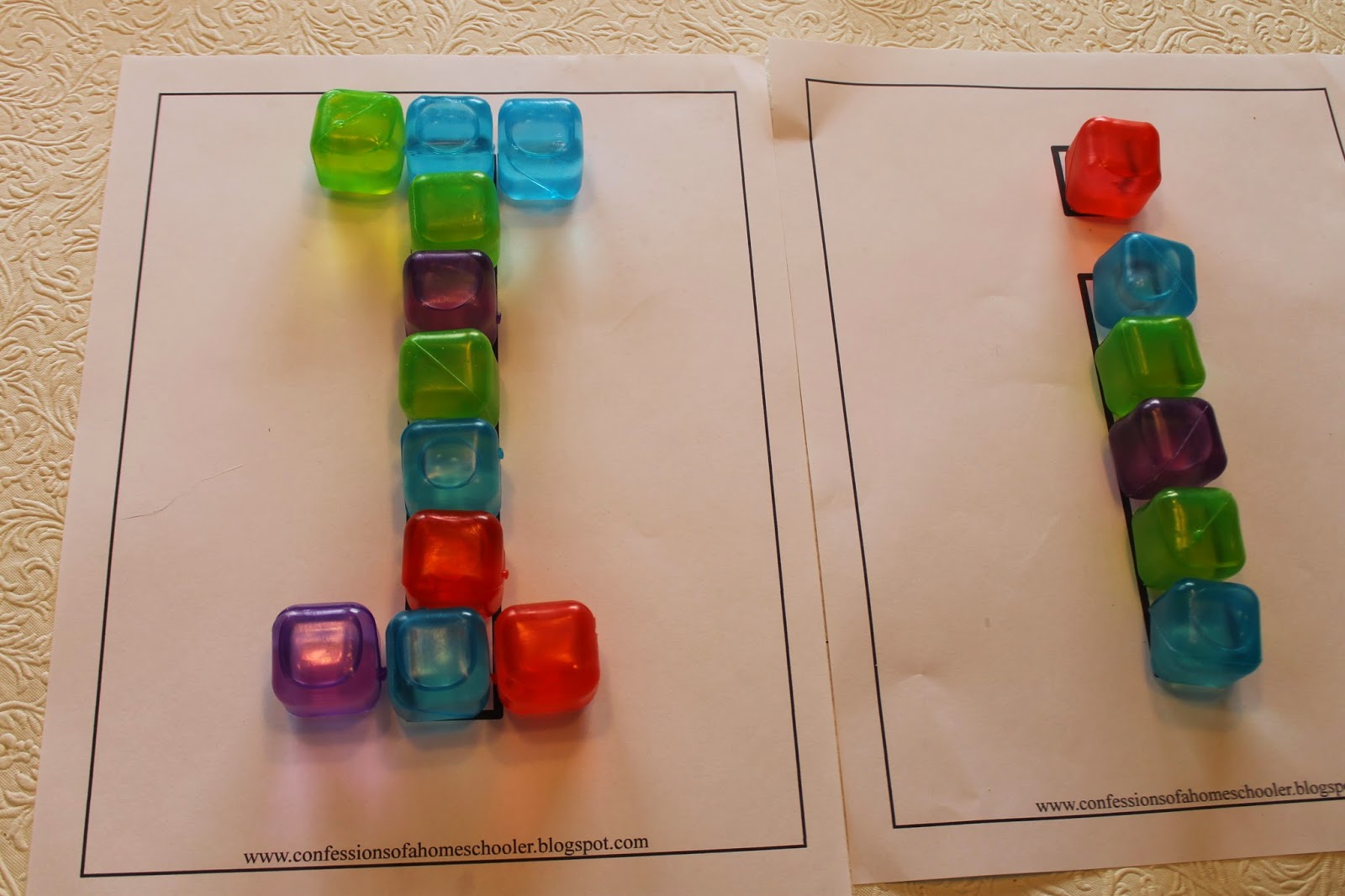 Insect shadow match
Ice art! I froze a block of ice and we made colored salt (tempera paint mixed with salt). He then put the salt on the ice to make a pretty pattern. We talked about how the ice melted faster in the areas where the salt was. He could even put his finger into it! He was pretty sad when Daddy got home and he realized his masterpiece had melted. 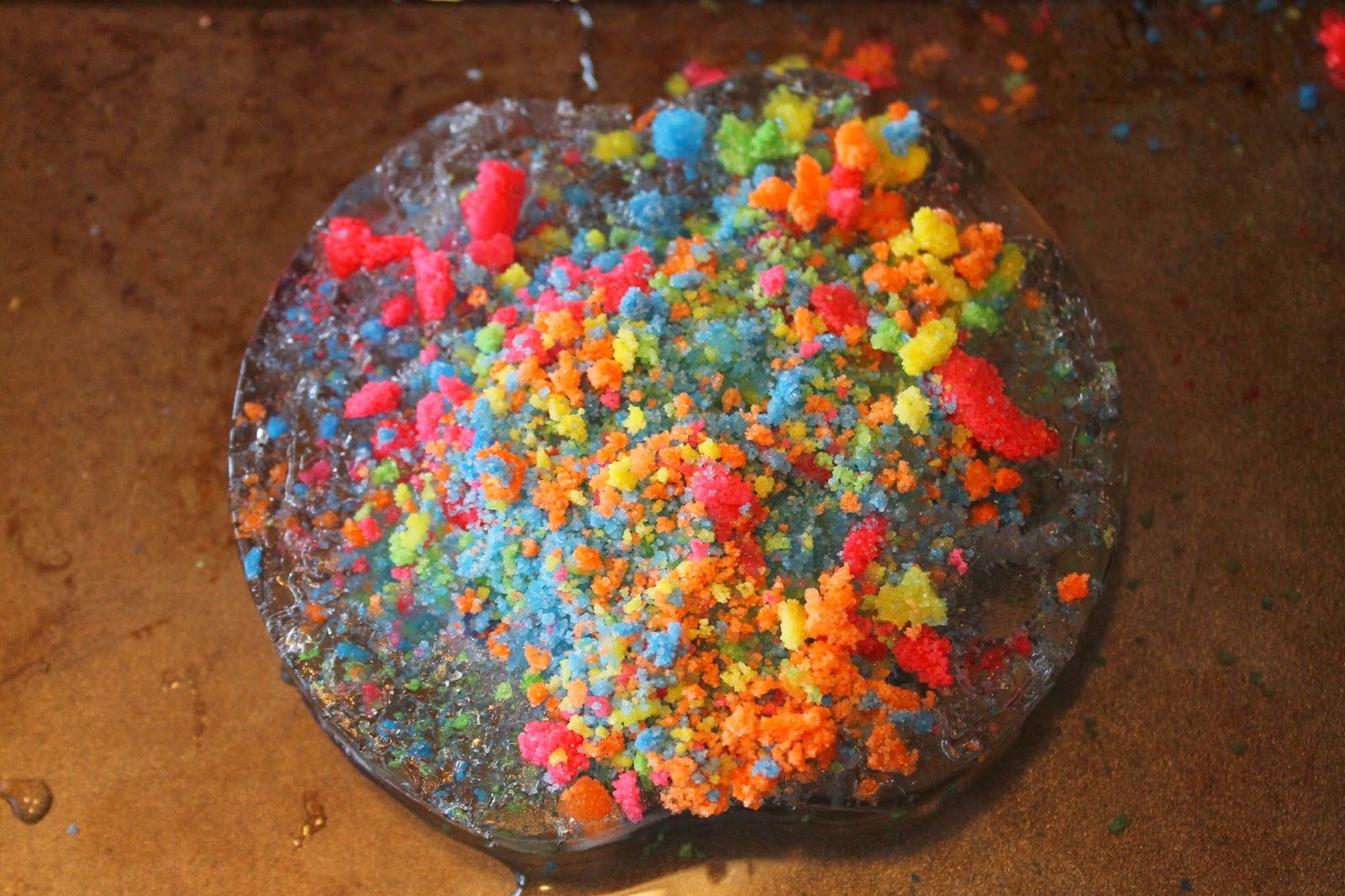 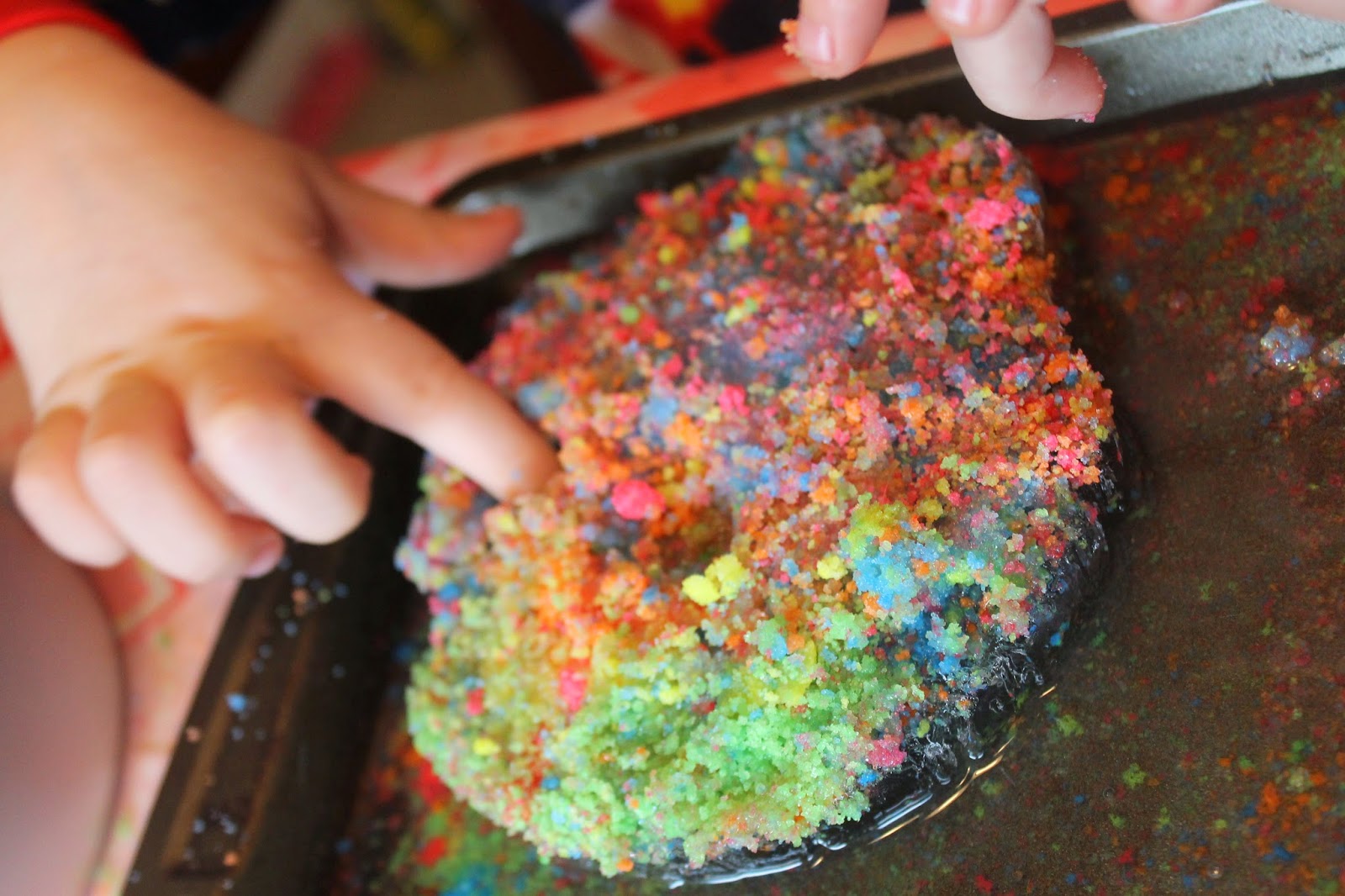 On another day, I froze some artic figurines and he used more colored salt to help get them escape the ice. 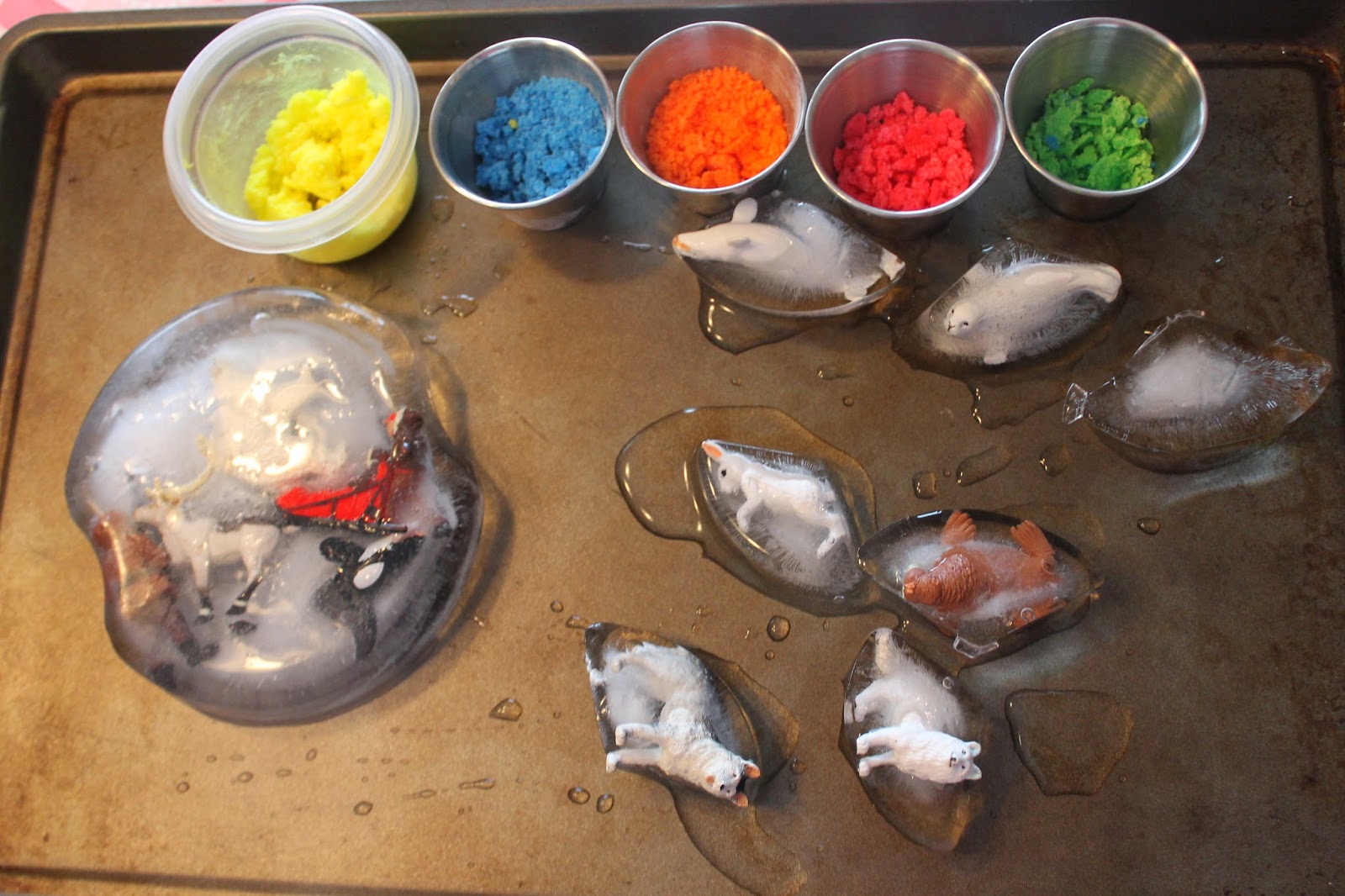 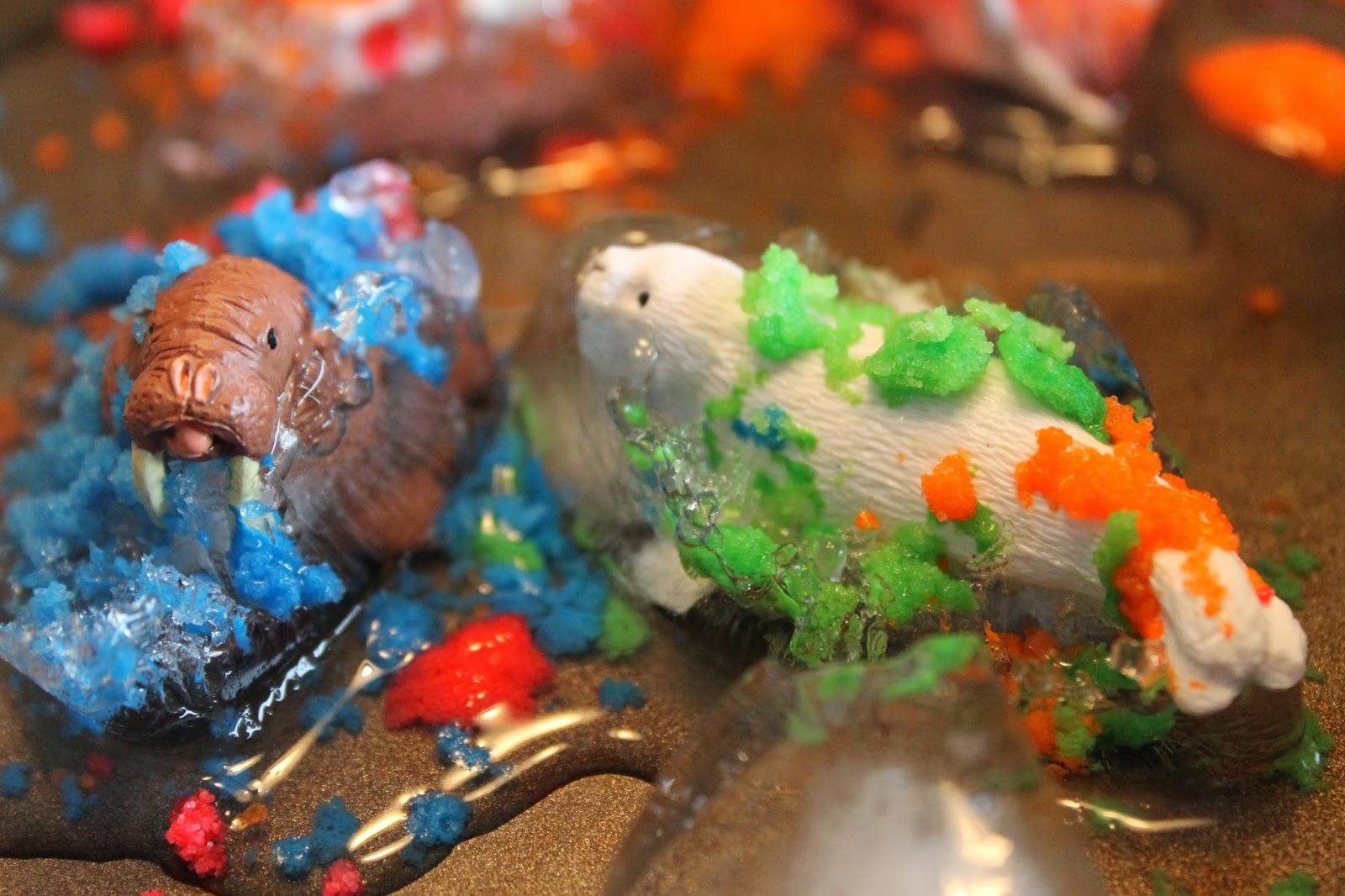 We made ice volcanoes (inspiration here). Ours didn't turn out as well as hoped, but Philip didn't know. Perhaps I didn't add enough baking soda to the water. We just poured lots of baking soda into the middle of the volcanoes and he was happy as a clam. He practiced using a couple different types of medicine droppers - good fine motor skill development. 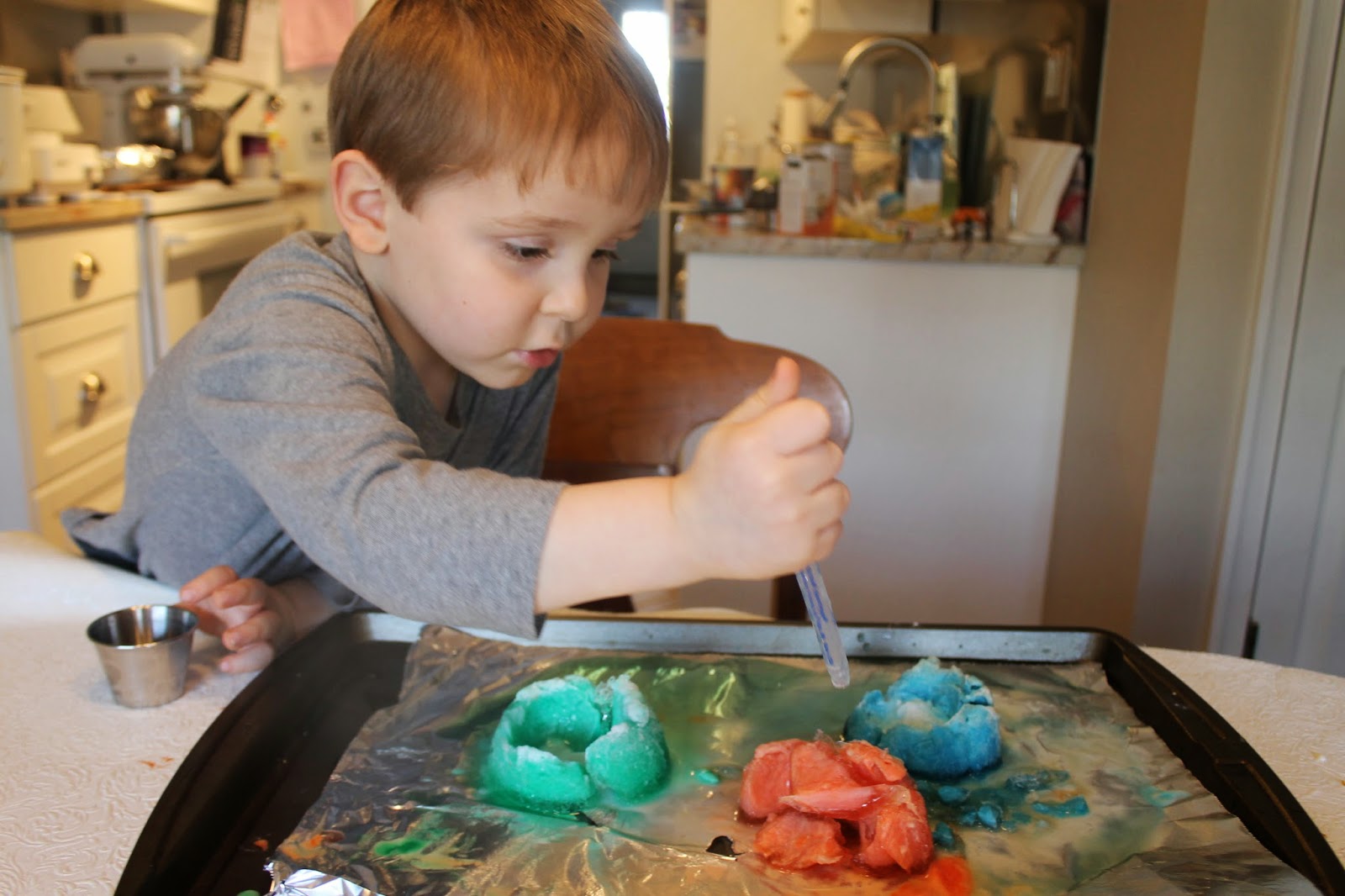 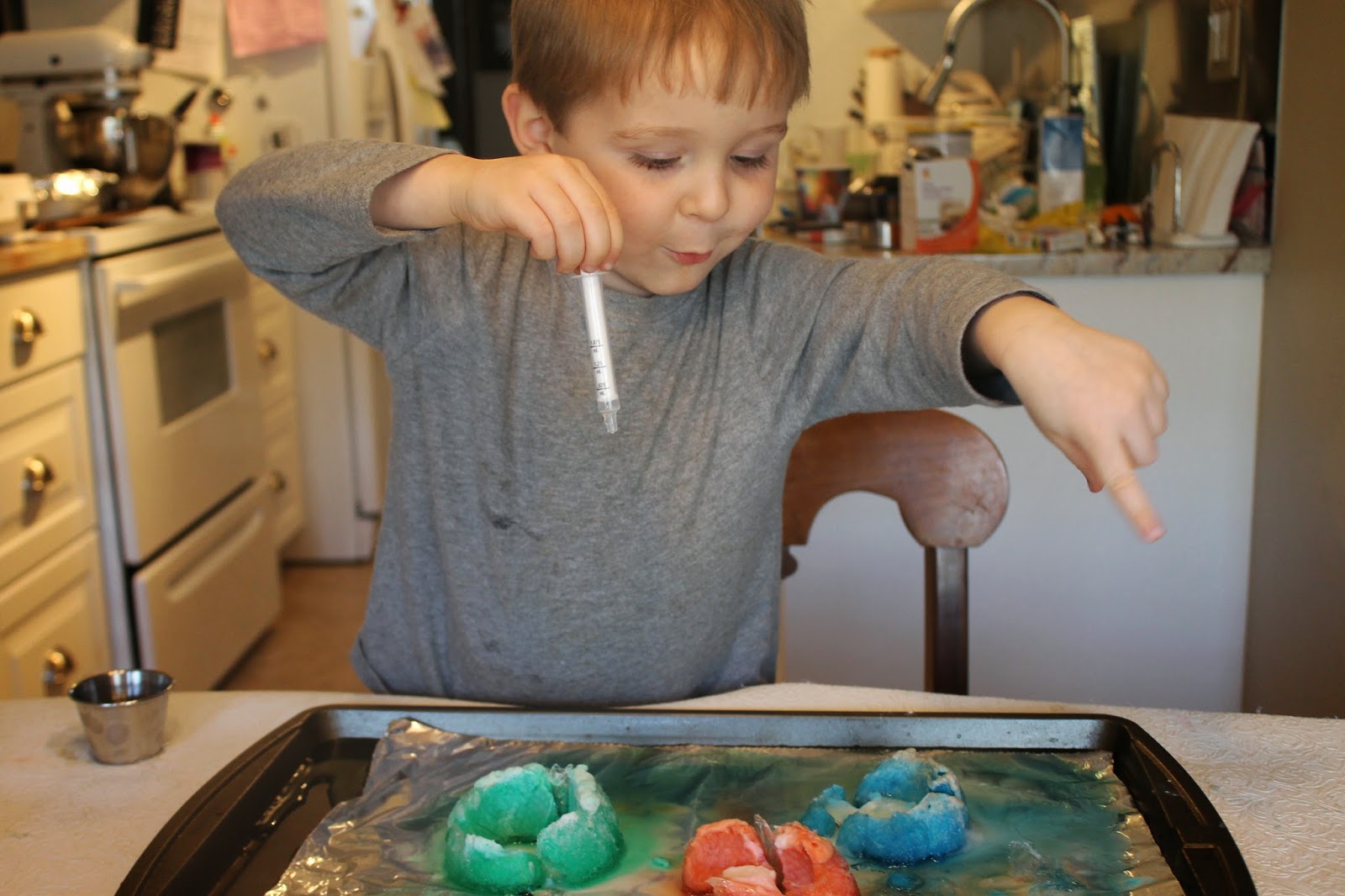 I happened to hear news that the Iditirod was taking place that week, so we went online and looked at a few videos of the Iditirod. The kids both loved seeing the dogs!
Our letter of the week craft was an Iguana. 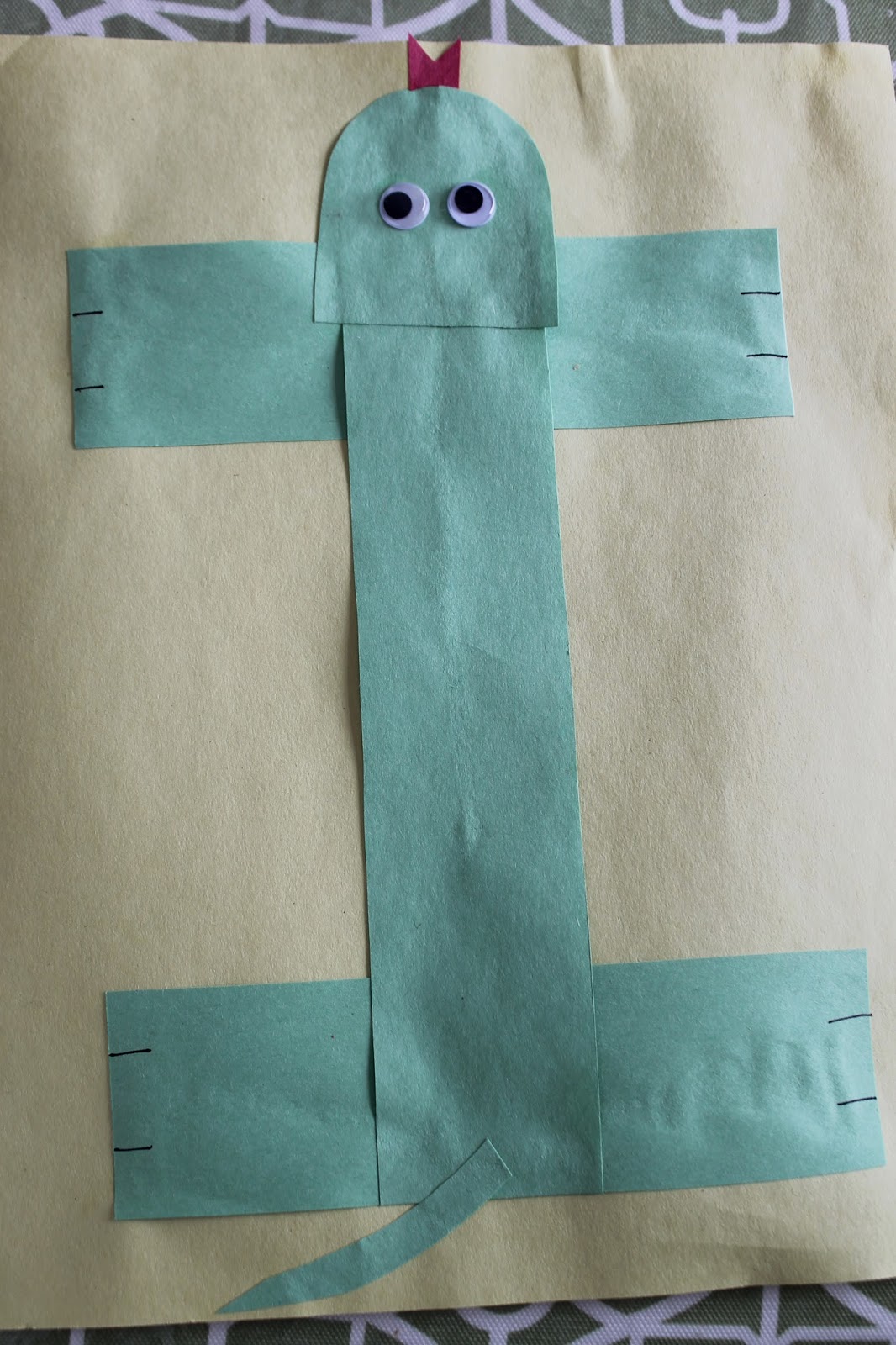