It was a typical February around here - cold and snowy. 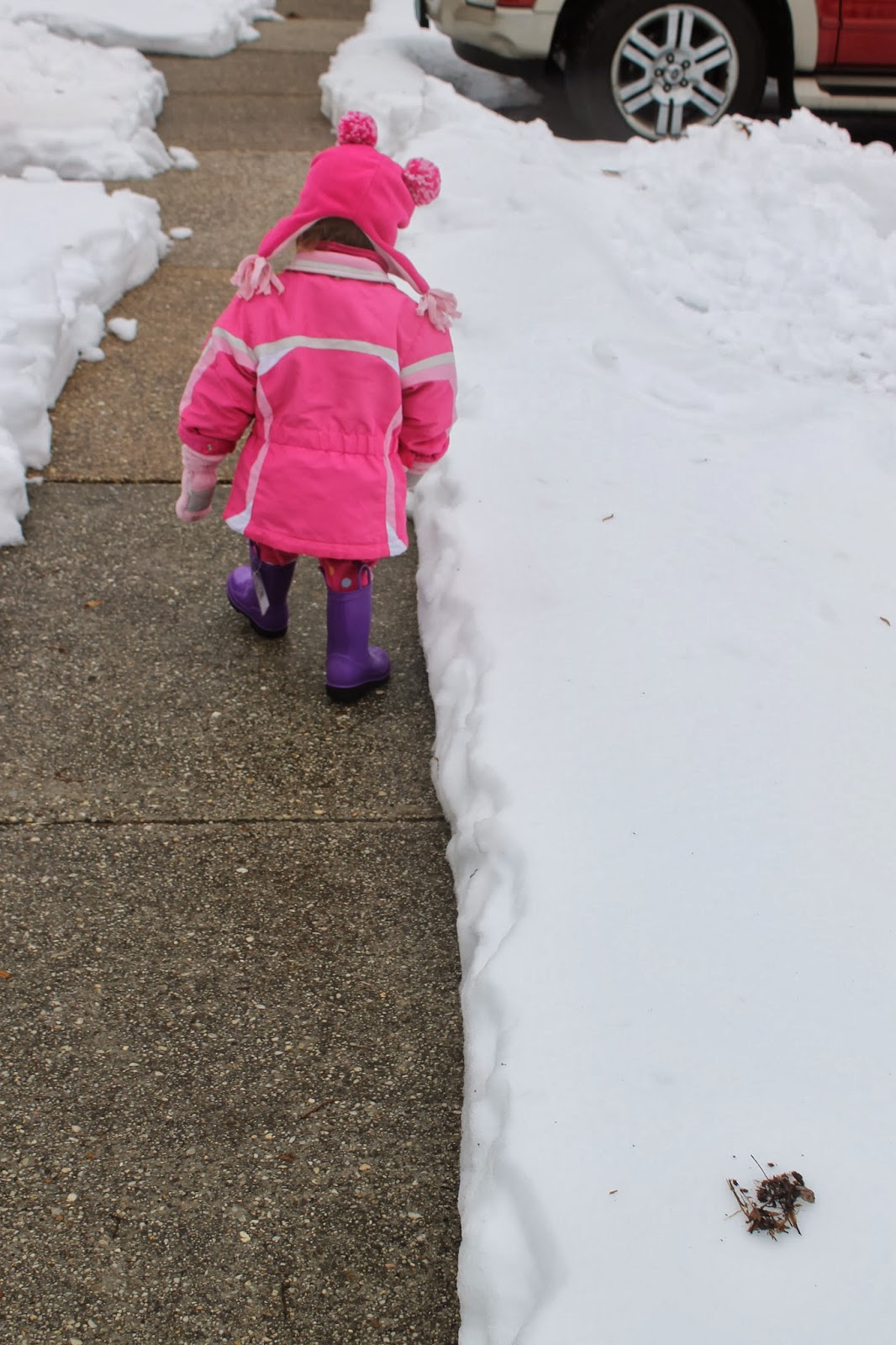 When I looked over our pictures from the month I thought, we didn't get out much!  We did take Andy out duckpin bowling with us one weekend, have a co-worker over for dinner and friends over for lunch/playtime, and go to our usual kids activities, including a Valentine's party. 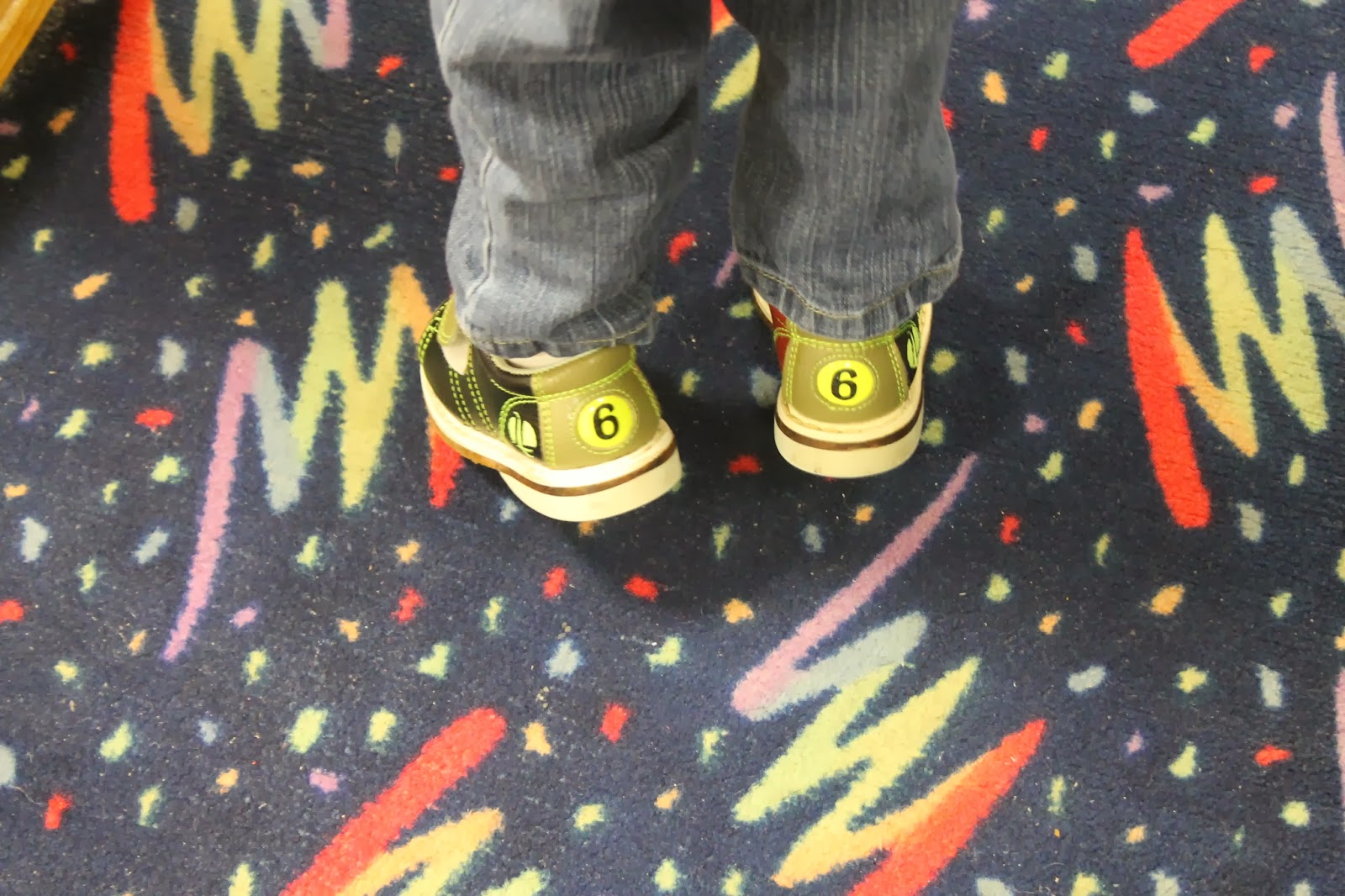 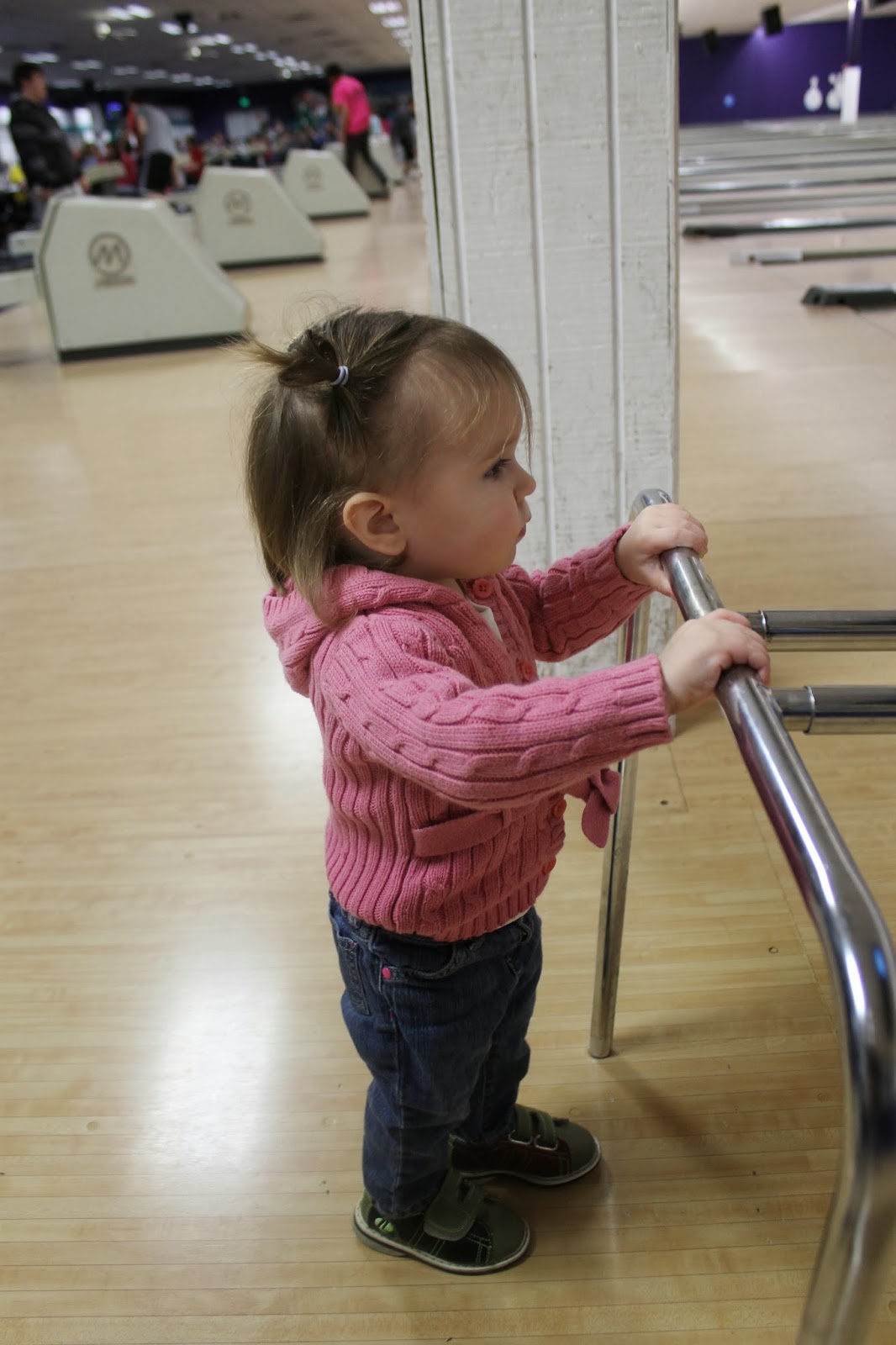 Babies in bowling shoes are seriously one of the cutest things ever!

Andy was off on Valentine's Day because of snow. It was so nice to spend the day together.  I had lots of activities planned for the kids and the house was a complete wreck by the end of the day, but a happy wreck! The following weekend Andy and I got out for a Valentines' date night. Philip absolutely loves his babysitter and was so excited for her to come all day, helped me clean up the house for her, and then for several days afterwards kept asking me to go out with Andy in the evening so that his babysitter could come back to play. Andy and I went out to a nice restaurant in our area that we have never been to in our many years of living here. We then went to see Pepe Romero, a classical guitarist, perform. It was a great night out! 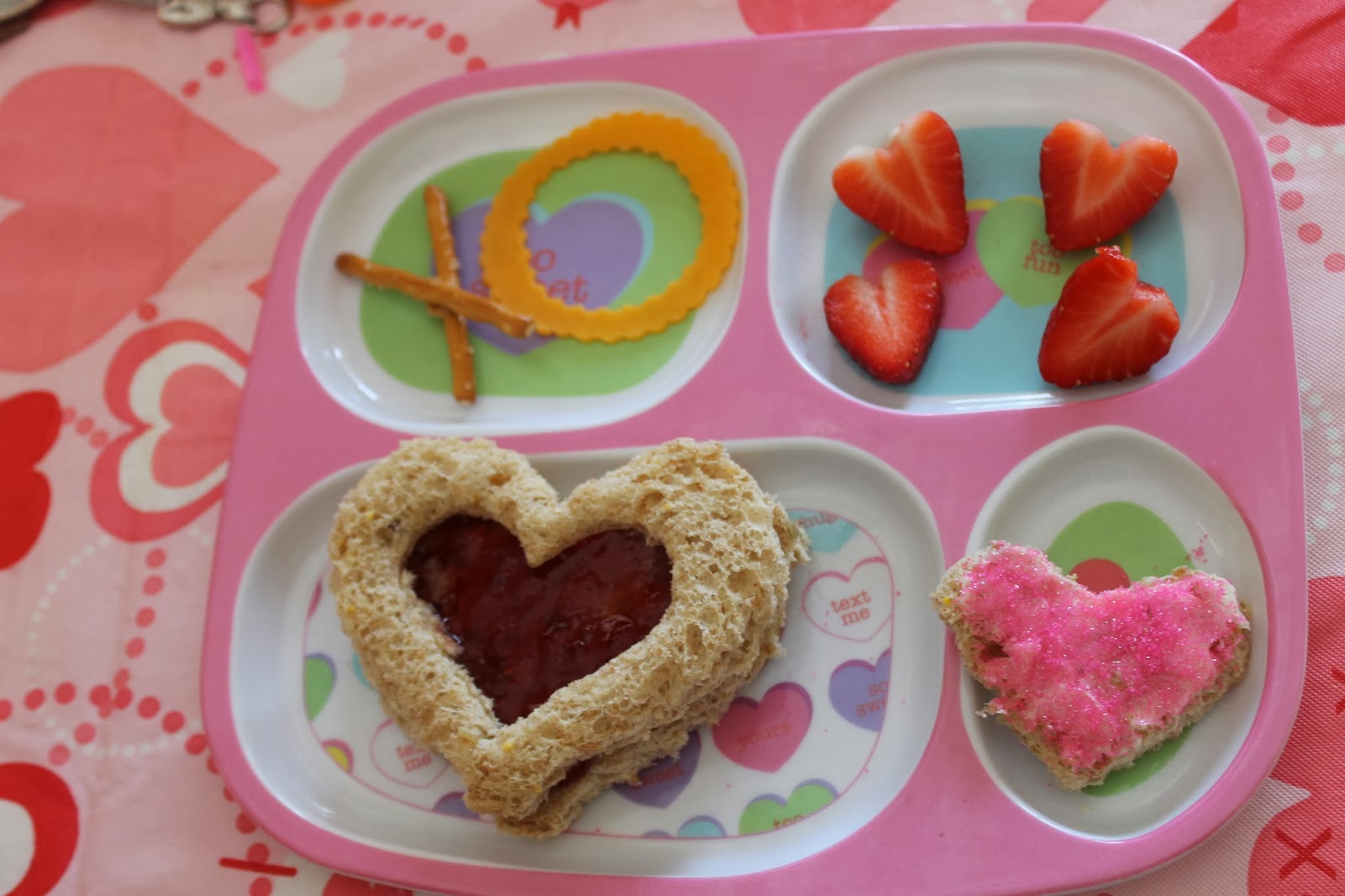 I was particularly pleased with myself for coming up with
two items on this plate on my own (not through Pinterest!) 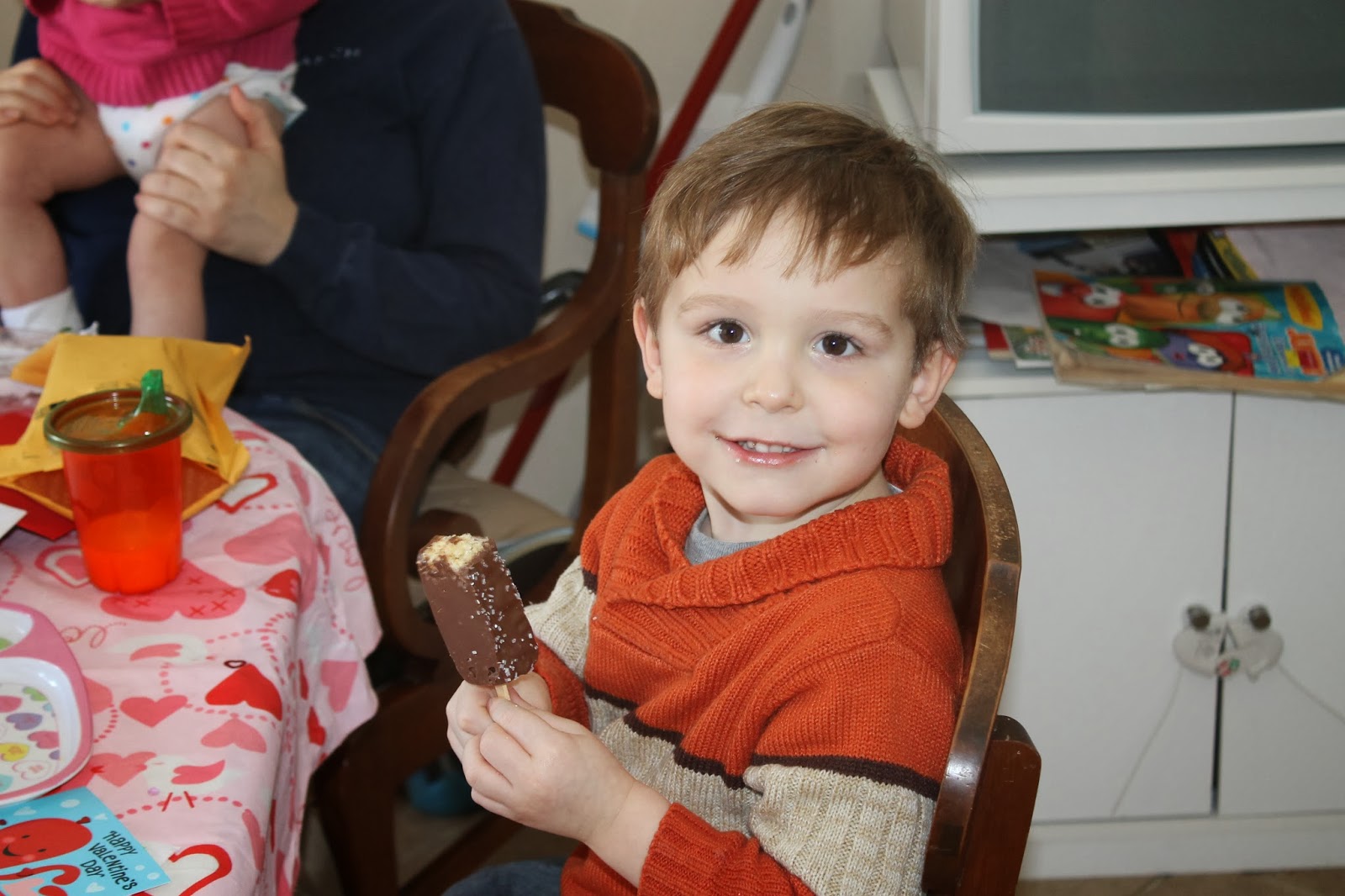 We had one really warm Saturday and took the opportunity to wash all the salt off of our cars. This was one of the cutest afternoons ever as Philip continually filled up beach pails for he and Julia. Julia would immediately dump hers out and ask for more while Philip would bring his over to the car and dump it on the same spot over and over while proclaiming that "Baby doesn't know how to wash cars." When I told him that I was going to have to take her in for a nap, he kept telling me, "I'm afraid that baby can't take a nap right now." And he would tell Andy, "I"m afraid we can't turn off the water yet." 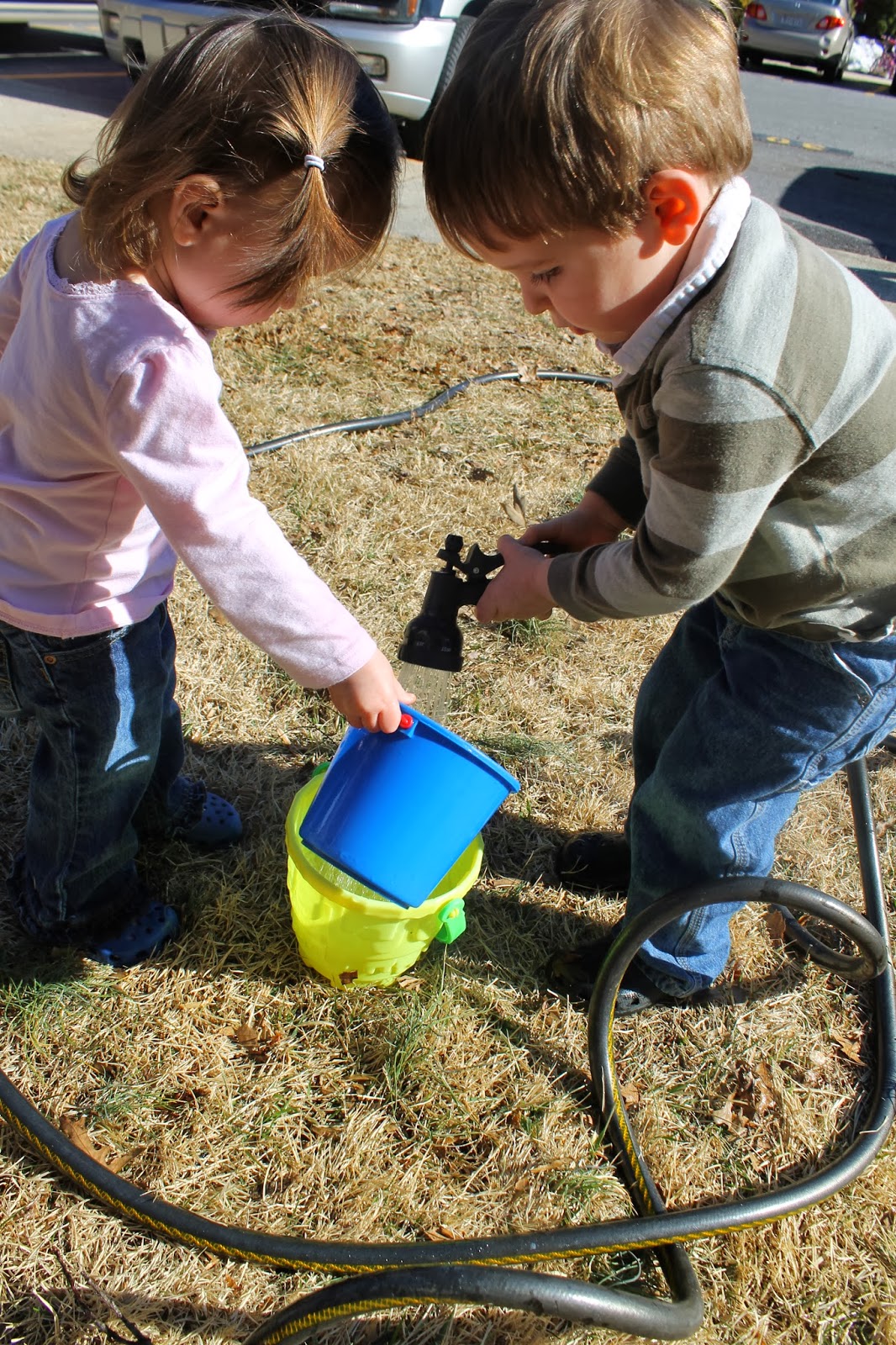 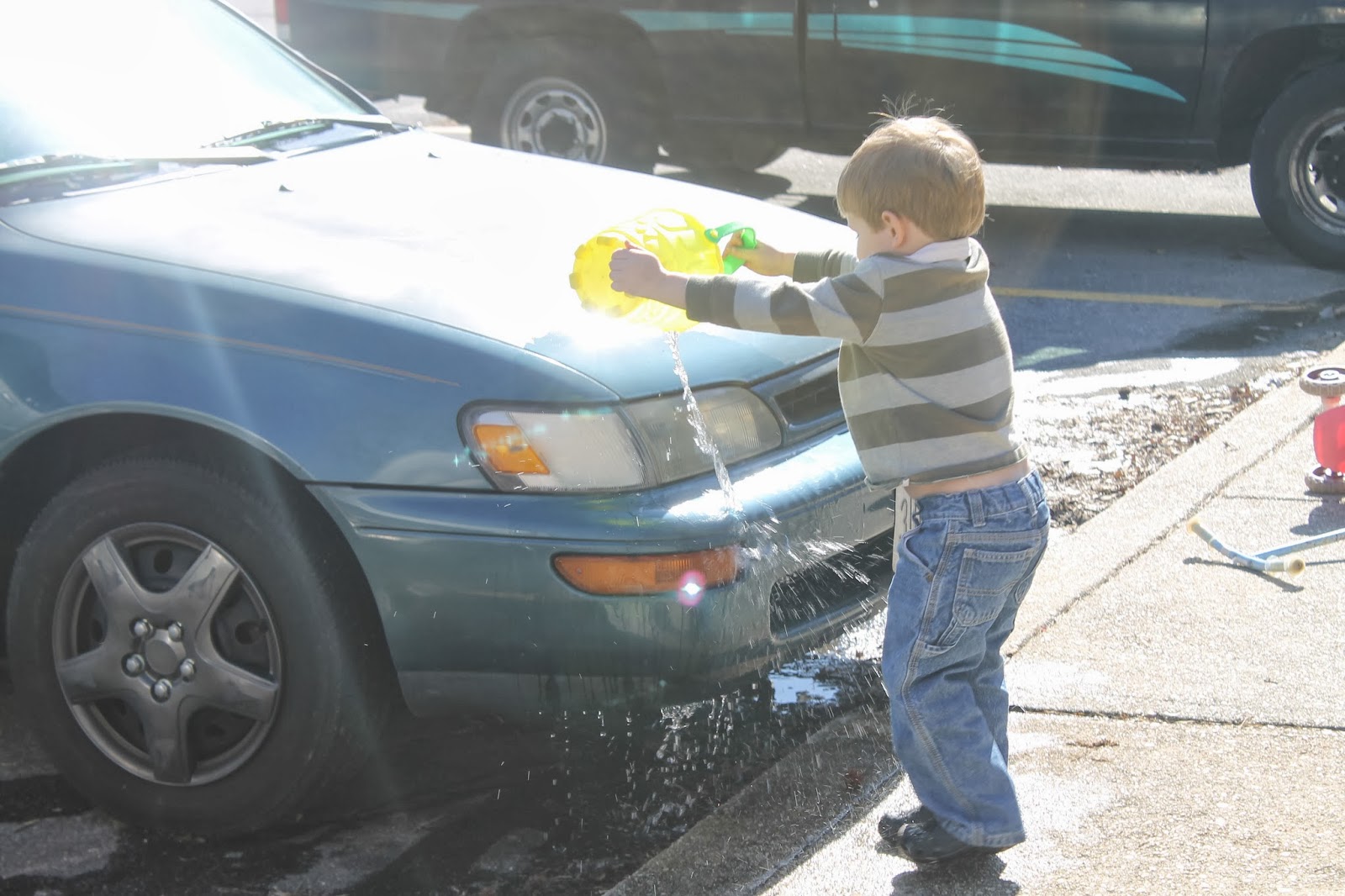 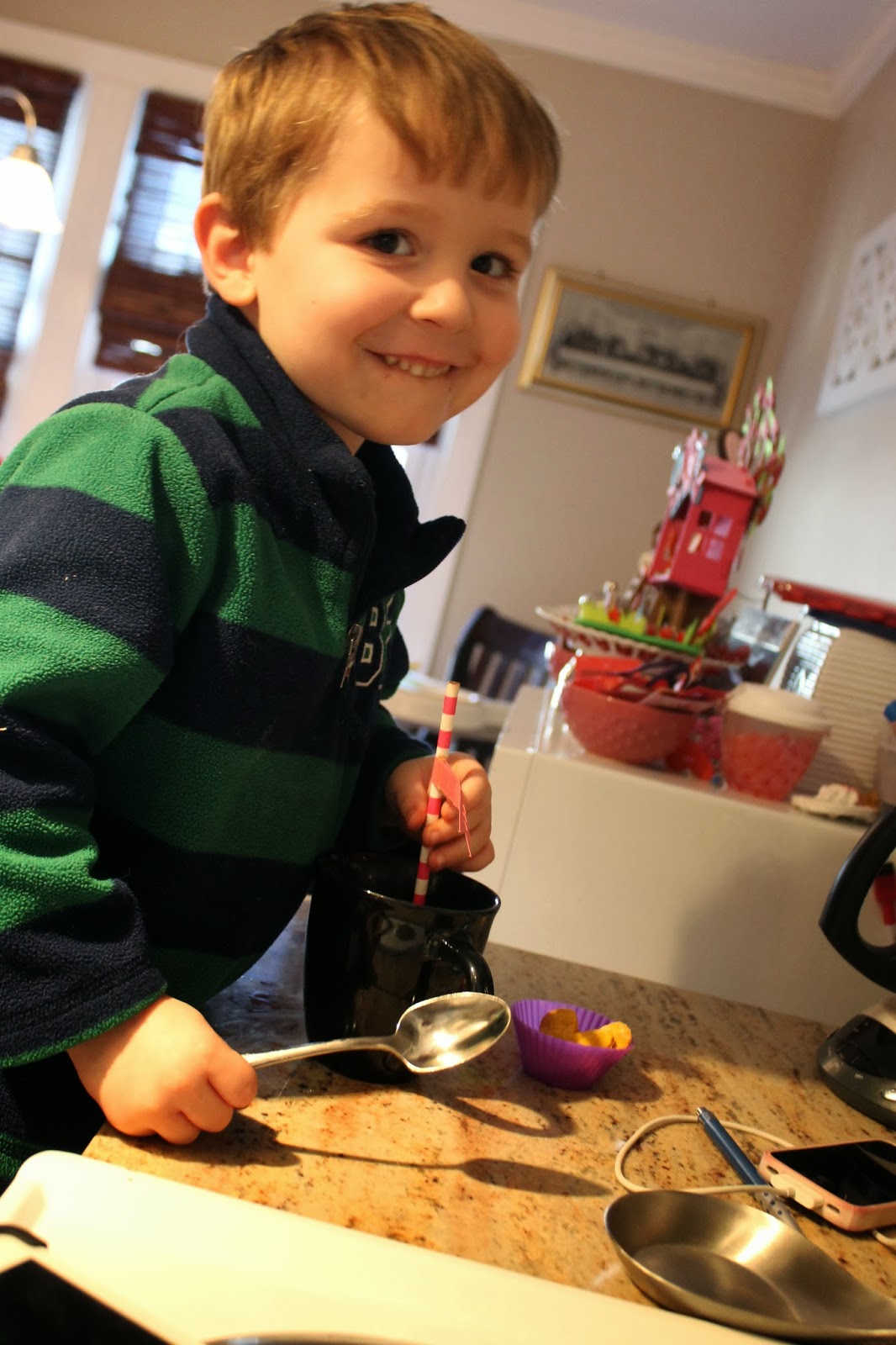 Philip is so much fun! He is a total boy in his interests and his energy. We have seen such changes in his confidence level ever since he turned three.  We had a major breakthrough this month. He has been going to Atrium once a week since the end of September and this month he finally spoke to his teacher for the first time! His teacher was so excited when I came to pick him up that day. Next step, actually talking during circle time. We'll see if we get there by the end of the program! We bought Philip a balance bike at Christmas a year ago. He wasn't too interested in it for most of the year, but just before Christmas this year he started riding it around the house. Now he loves to zoom up and down the block with it. He mainly keeps his feet on the ground, but he is experimenting with picking up his feet here and there, and he is fast! The things he kept saying to us this month were, "Look at my eyes" (when he wants to make sure we are paying attention to him). This was usually followed by, "Watch this!" as he did some new trick. He also loves to throw out plans and ask, "Hey, would that be a good idea?" We started having a once a week movie night where we have a picnic dinner in the living room and watch a movie. When he has "ideas," 9 times out of 10 it is for us to have a picnic dinner and a movie. He also loves to ask us, "Do you know (insert made up name)?" He says this with a sly smile on his face. Once in a while he talks about his imaginary friend, Seda, but this month he has added someone named "Peto Onero." He likes to ask if we know Peto Onero and often prays for him at night. Andy and I figured there might be a Peter Onero out there somewhere who needs some prayers, so we let him go with it. Lastly, he is continually packing a bag of toys for he and Julia to take to "racing day." In his mind, Andy and I are going out and Philip and Julia are going to racing day. 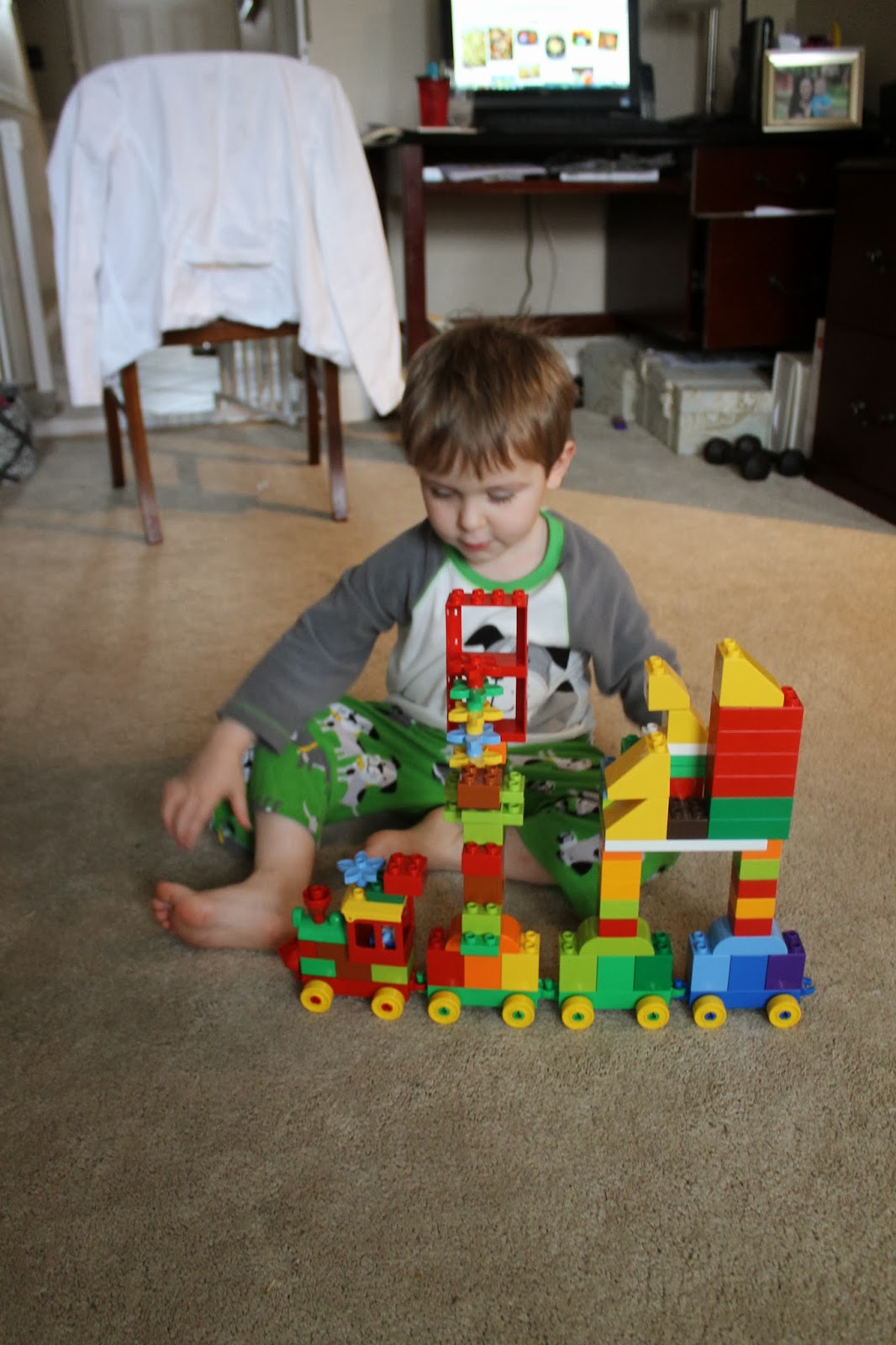 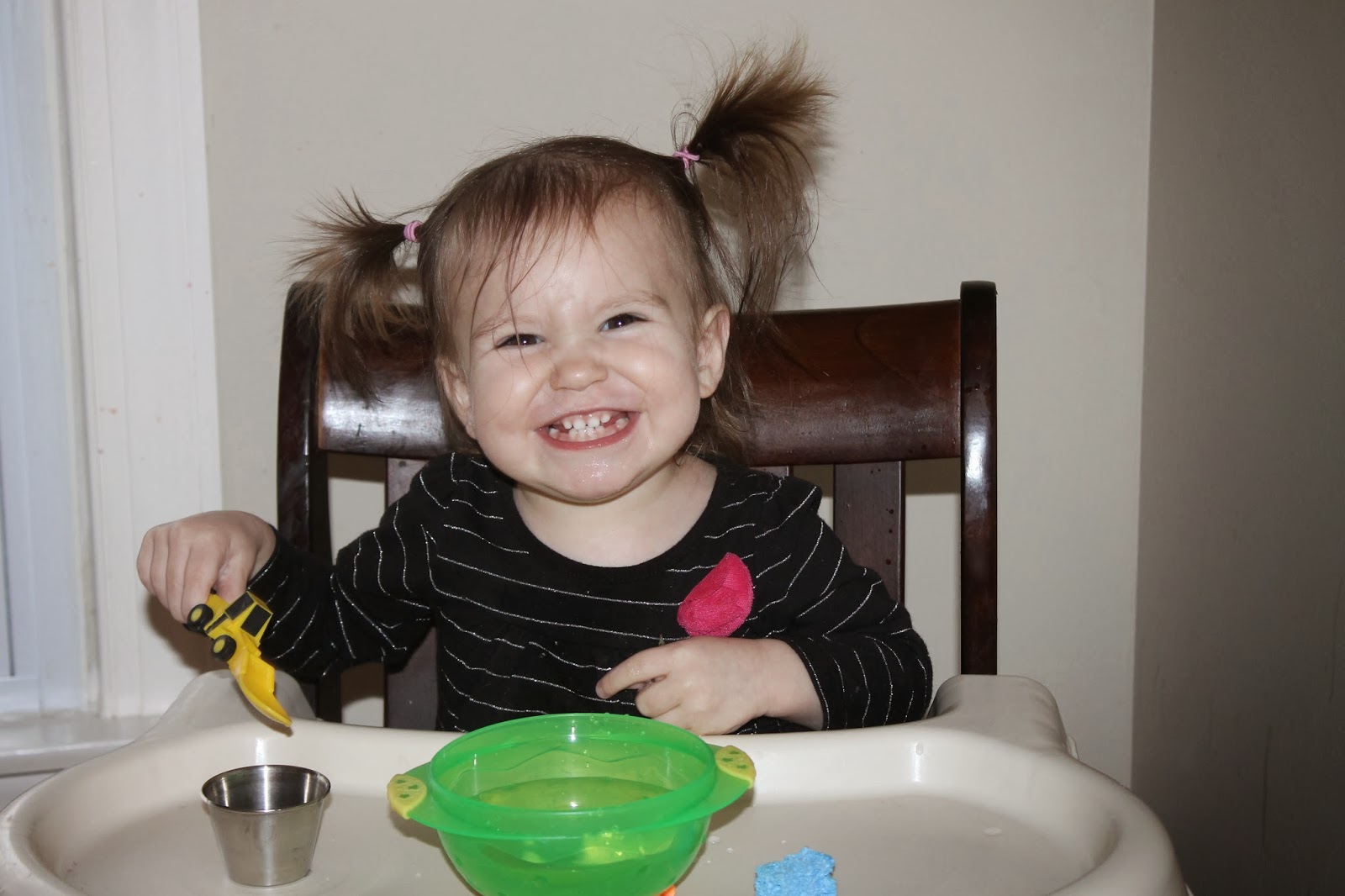 Julia turned 18 months and had her regular check up. The doctor confirmed what we already knew - she is a petite, healthy girl who is smart as a whip. She used her first 4-word sentence! She was just repeating what I said, but I was still surprised to hear her say, "That's nice of Daddy." She learned to say Octonauts and countless other words as well. She is having fun learning the names of body parts and especially loves to pat everyone on their heads while saying, "head, head." I already mentioned that she calls most holy images (and some regular old images), "Jesus!" She now calls all men Daddy and all fruit strawberries, "stawbears." She is our cheerleader, calling out "Yeah!" as soon as I park the car anywhere. Sometimes when she wakes in the middle of the night she cries out, "Yeah!"when I come into the room. It is funny to hear her go from crying and distressed to happy in such a short time. She wants to know where "Pup Pup" is every morning when she gets up and usually asks where Herbie is a couple times before falling asleep at night. In potty news, which I'm sure you are anxious to hear about, she started saying, "I pooped, I pooped" (false alarm) at each dinner and other random times. It took awhile, but we figured out that she is letting us know anytime she wets her diapers. She will also pull out her changing pad, bring it over to us, lay on it, and say, "Change me." Do I have it in me to potty train an 18 month old? We'll see. After going through a month or two-long water phobia, she is now back to loving water and begs to wash her hands all day long. I'm not sure which I preferred, the days when she would scream through her baths or handwashings, or now, when she is constantly asking me to turn on water for her and screams each time we have to stop. 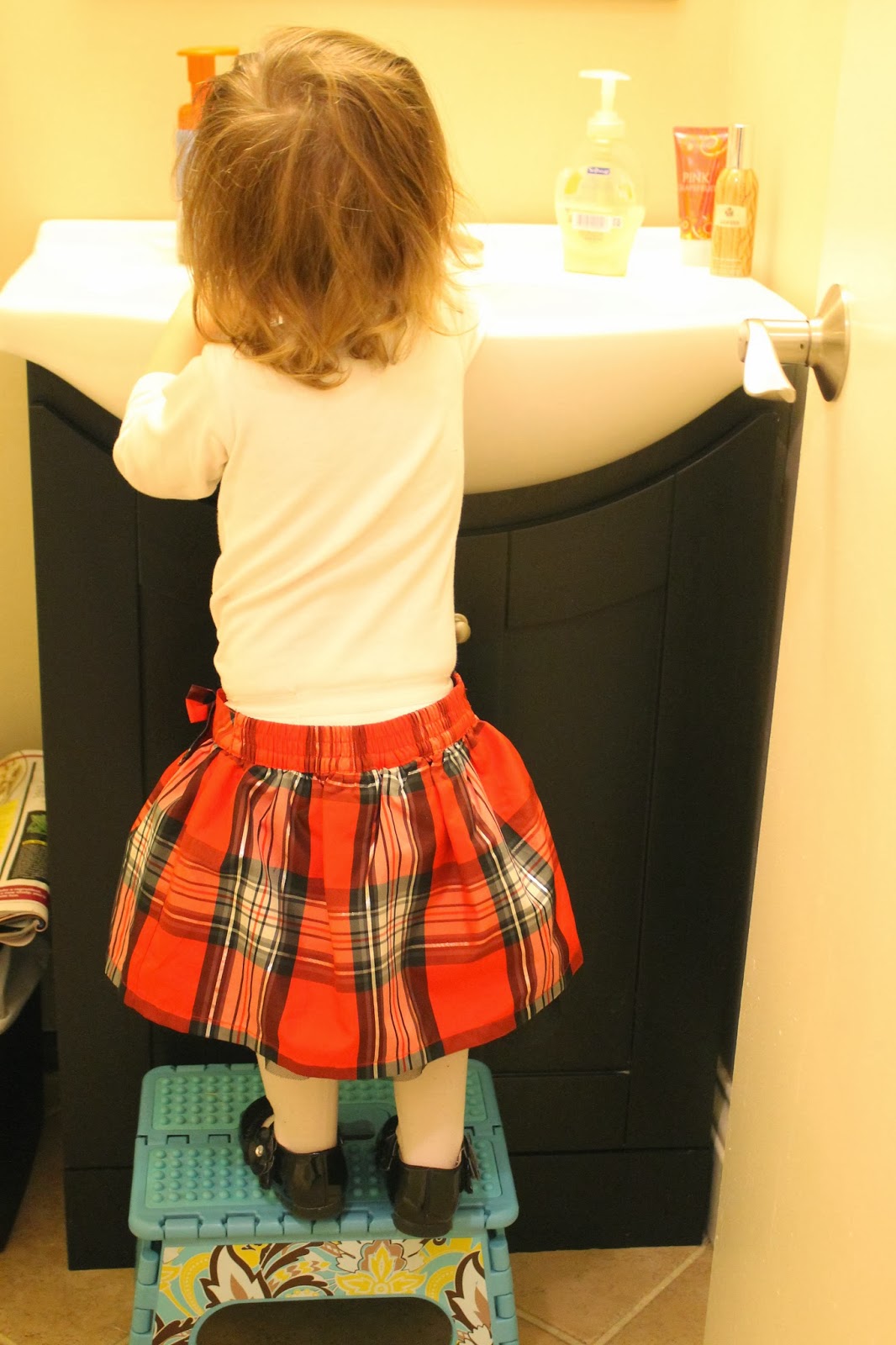 That about covers it for February. Have a great March! Spring is coming soon! 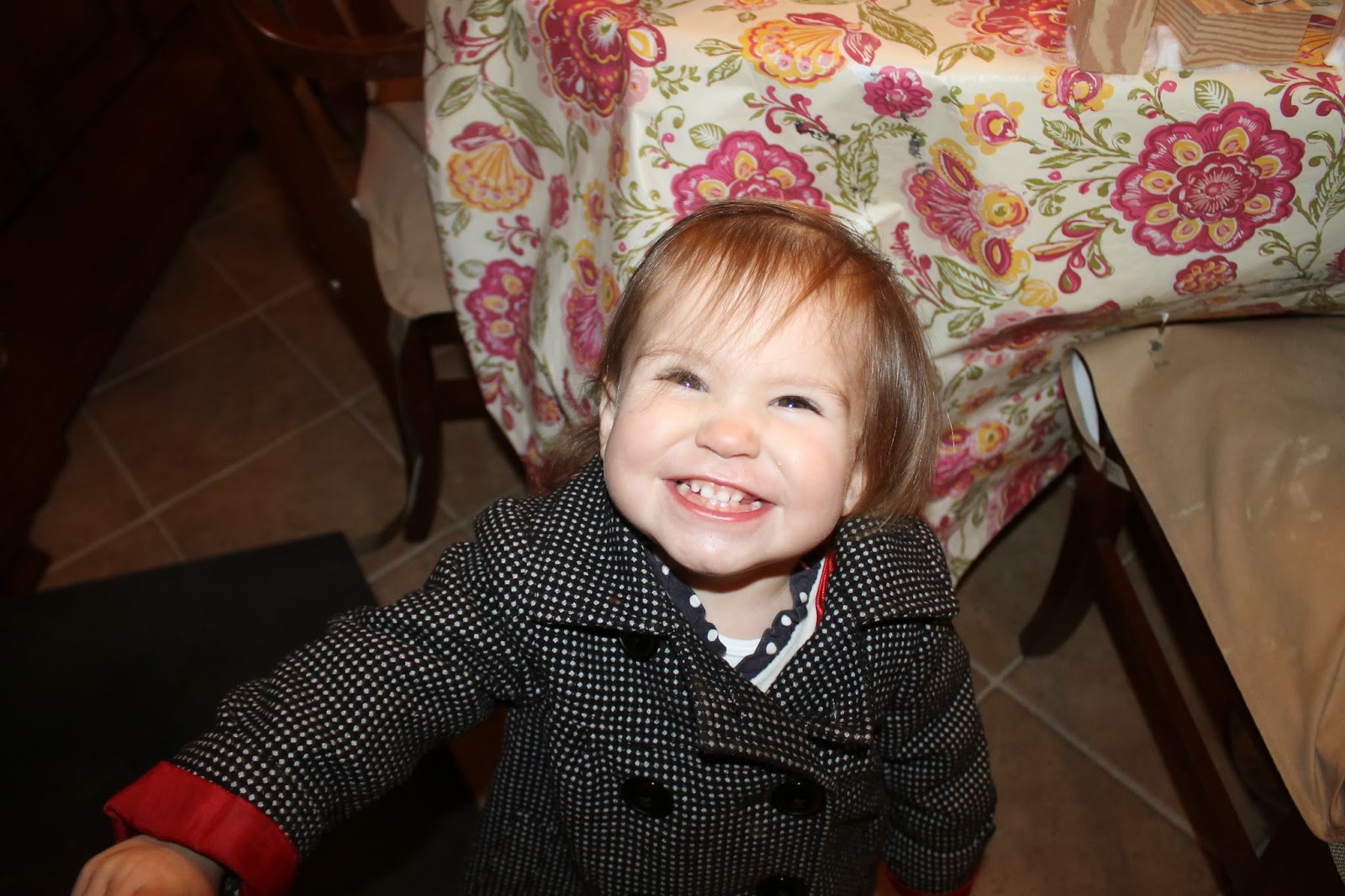