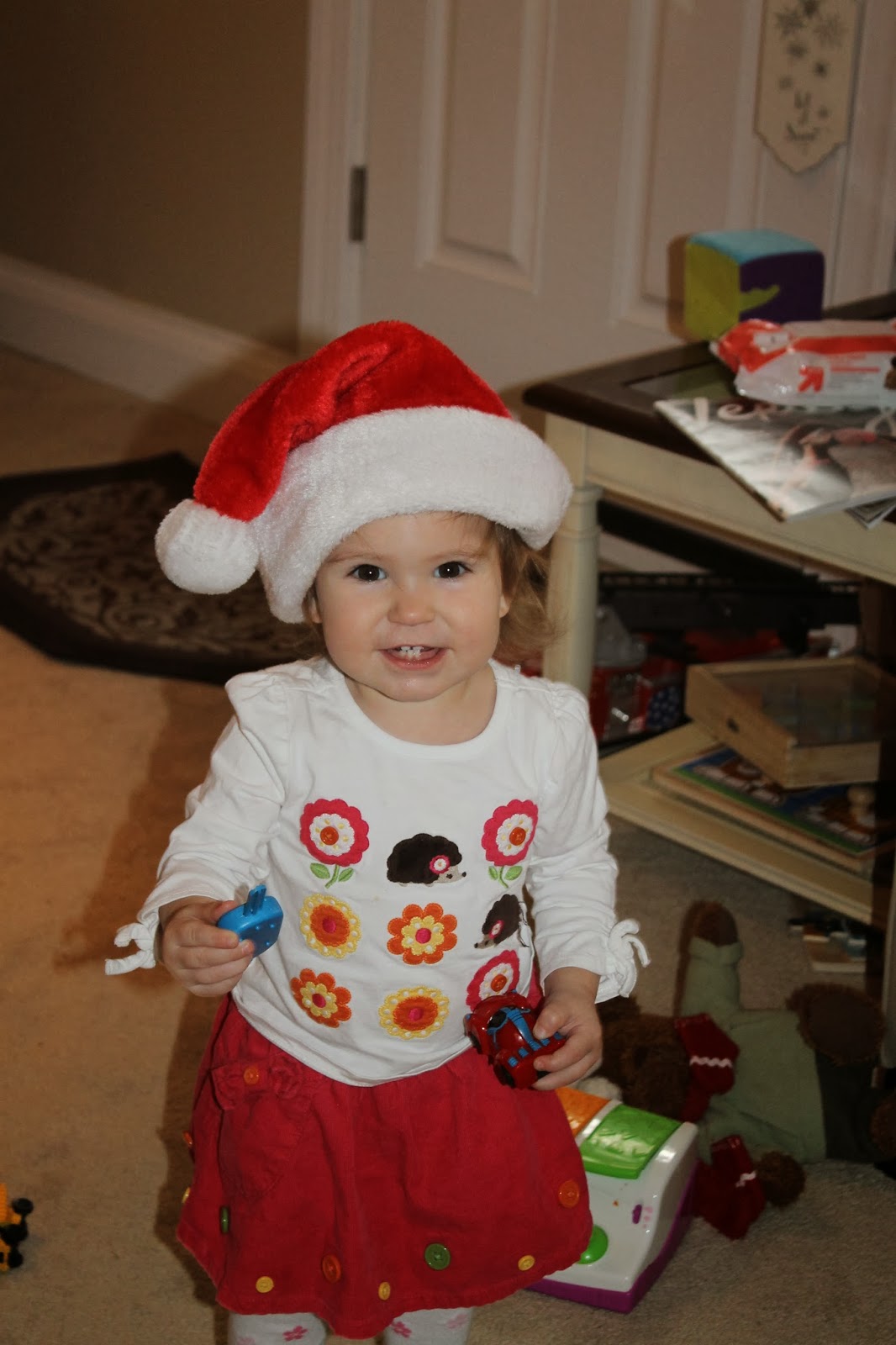 December was a fun and fast month!  For the past few years I always remember Advent with special joy as I think back on our first Advent with Philip. We bought our first home in mid-December and I remember spending the days leading up to Christmas with my 5 month old baby in my arms, listening to Christmas music on the Christian radio station and watching cable TV for the first time in years.

We returned home from Thanksgiving a couple days into December. We immediately got our first snow day. 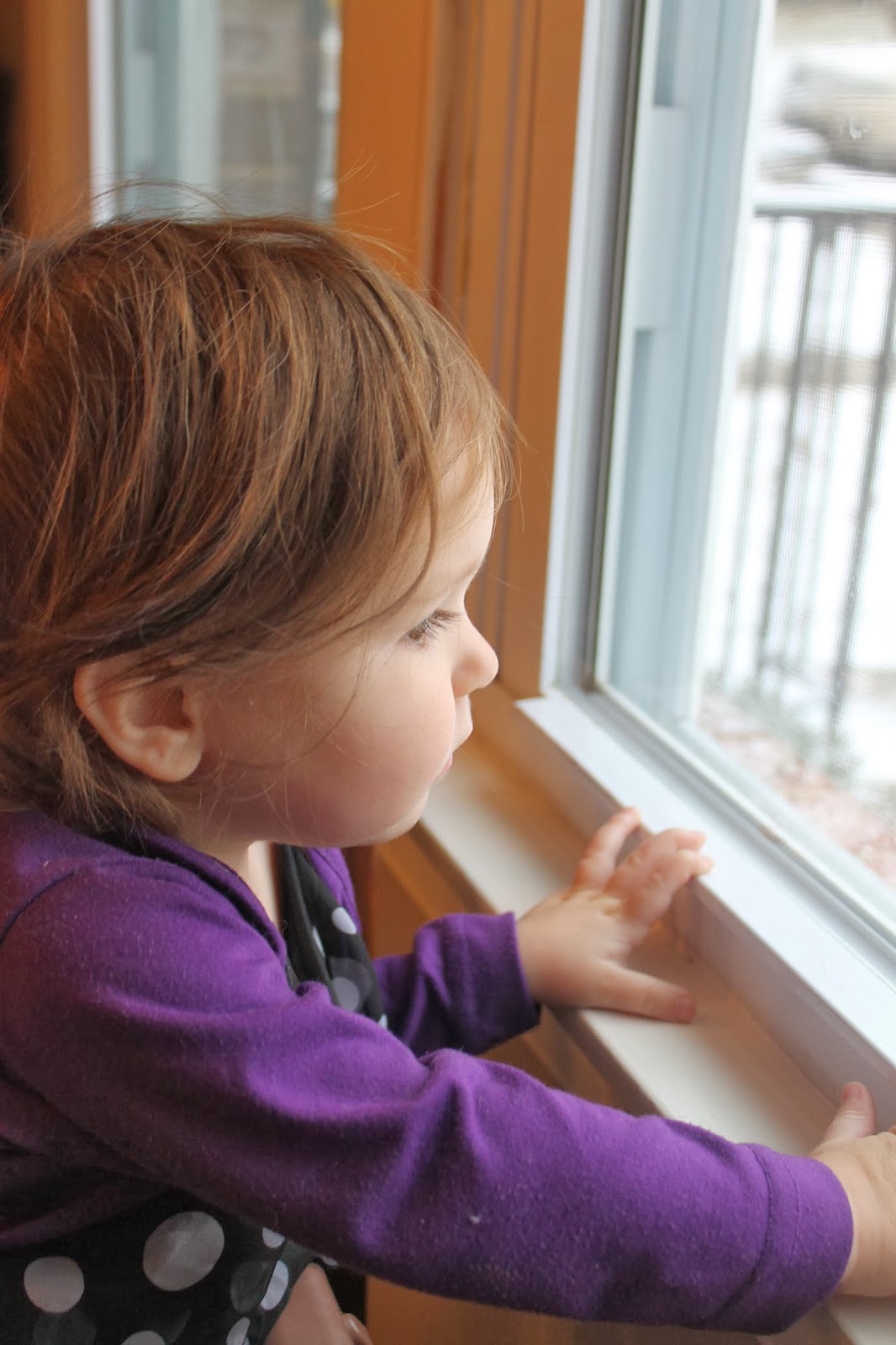 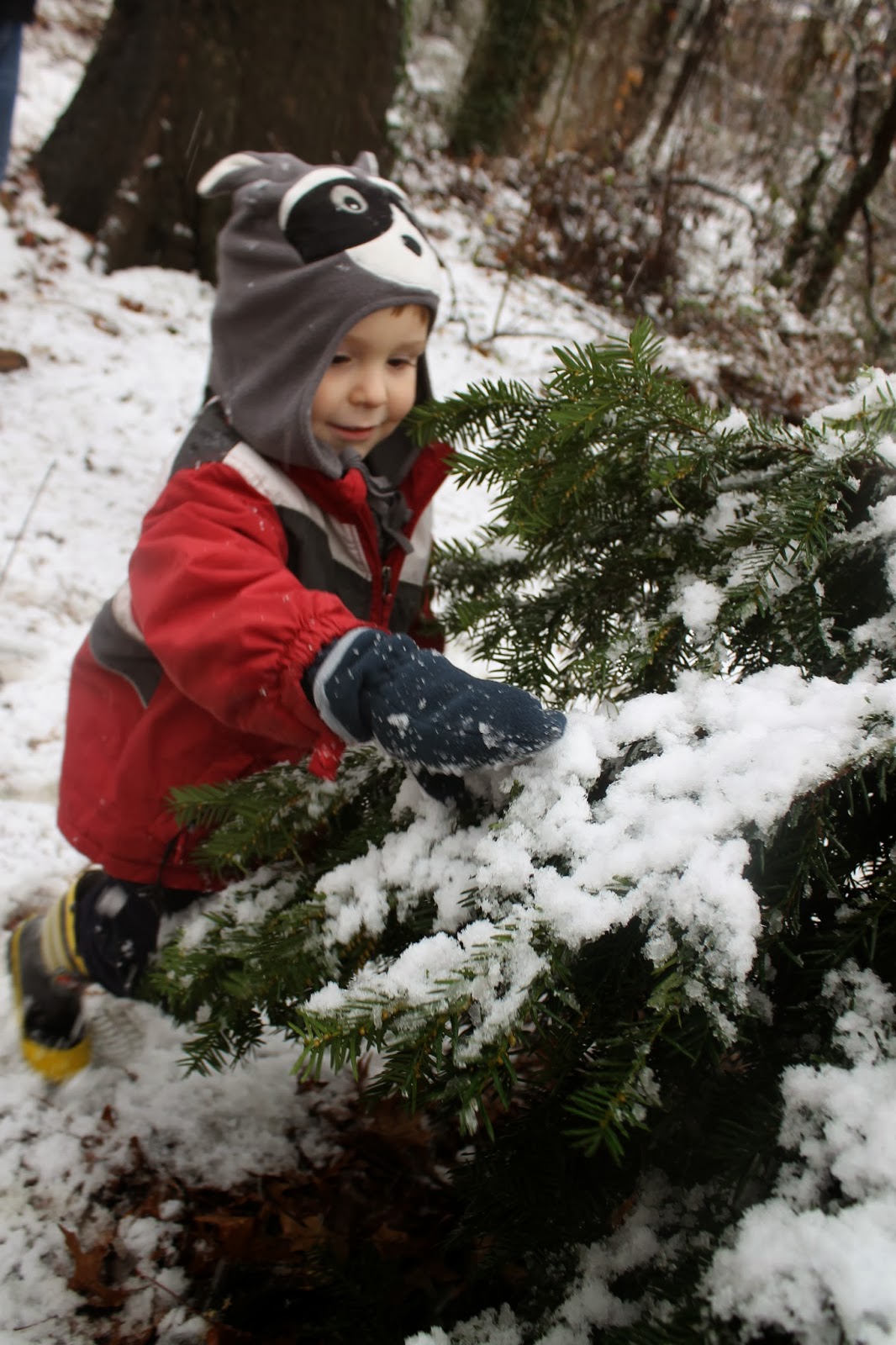 One weekend we went to the Fire Museum of Maryland to visit their Christmas train display. Both kids were captivated by it and we had a fun afternoon out. I brought the kids to a local garden center a week or so later to visit another train display. We have gone there every year and it is always a big hit. 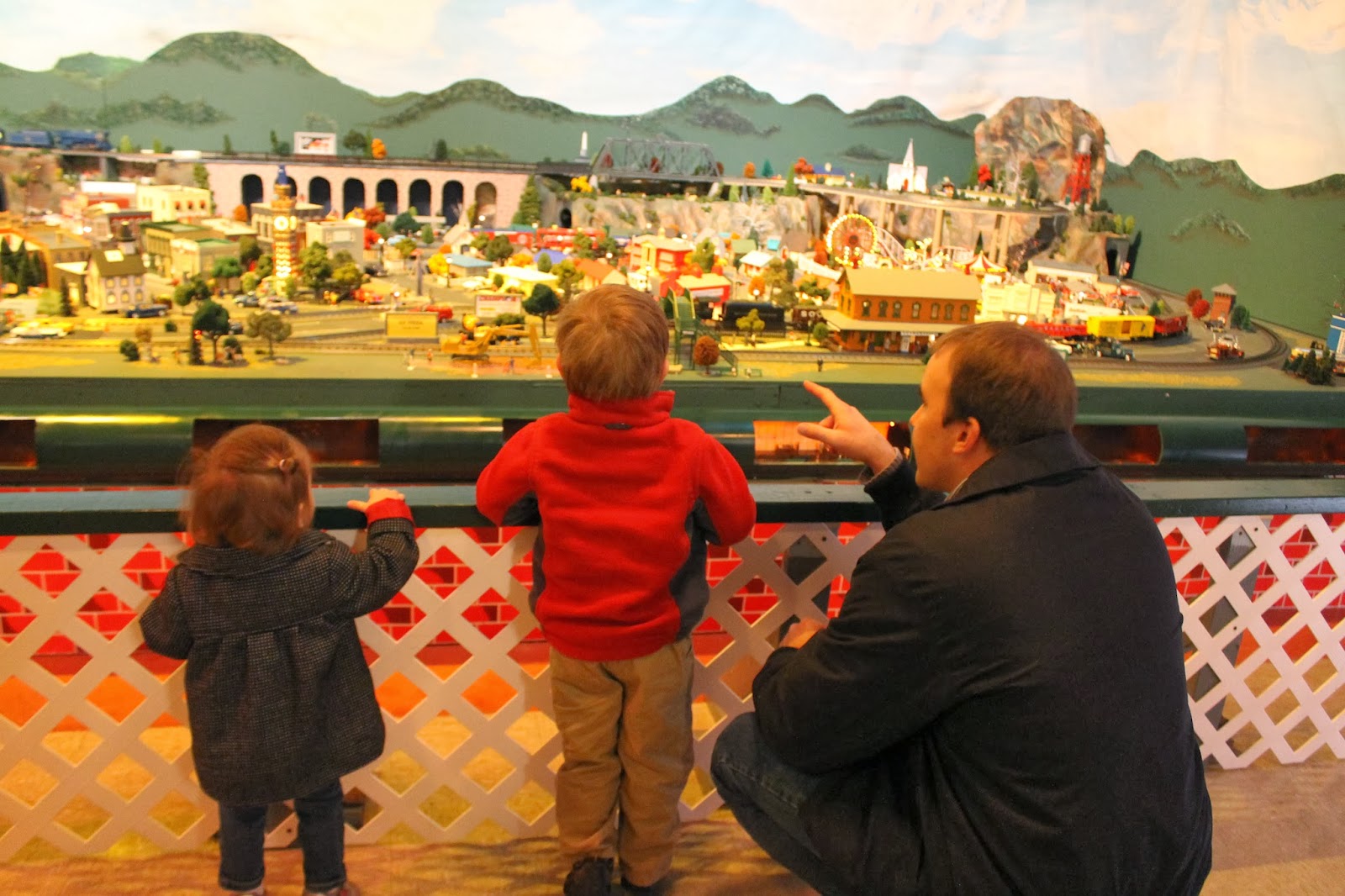 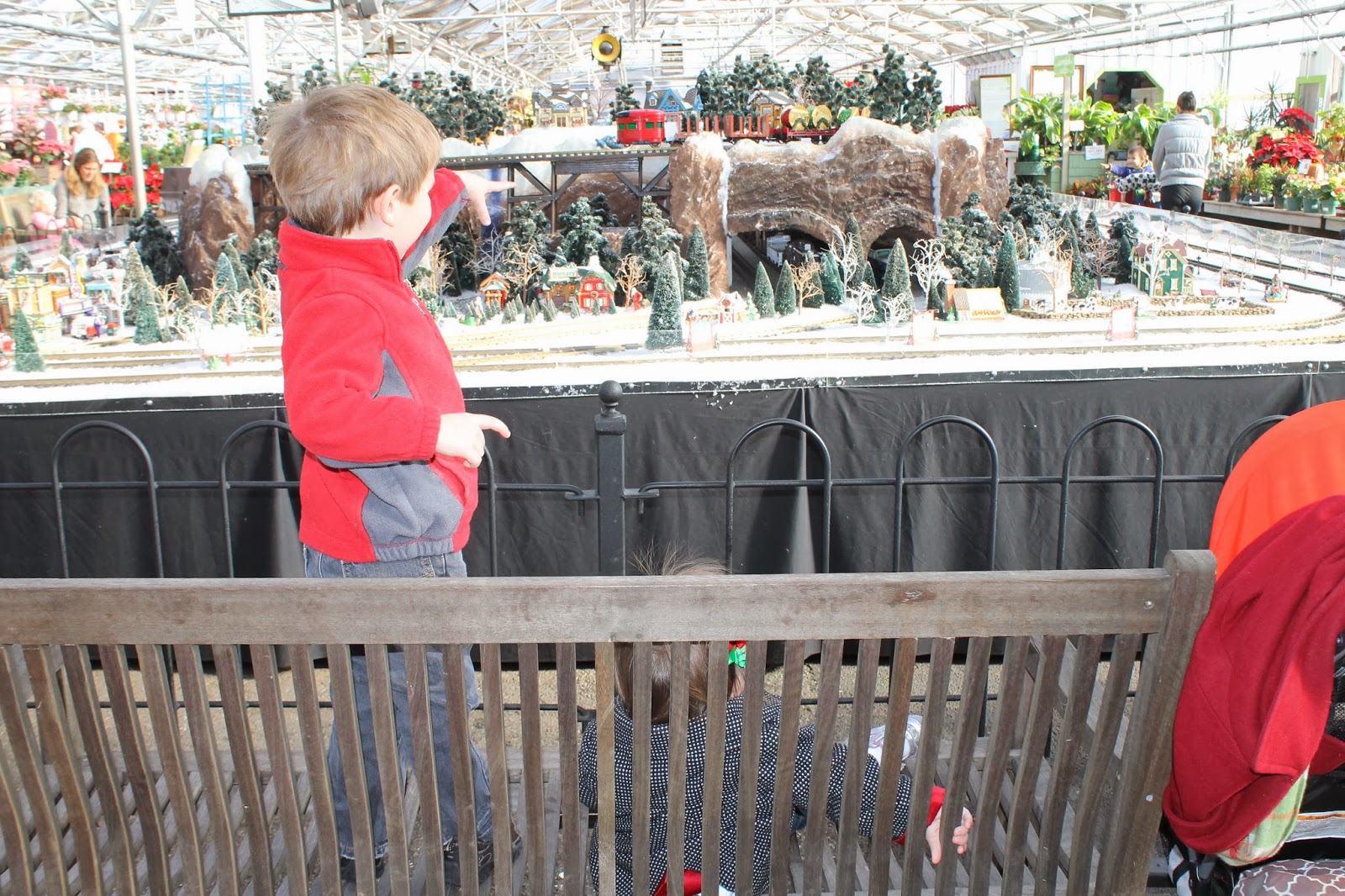 I hosted a Busy Bag Exchange for my MOM's Club. I coordinated one last year and it was a lot of fun. This year we had such a great response that we divided the exchange into two groups - one for toddlers and the other for preschoolers. Each Mom chose one activity and made enough bags of that activity for each person in the group. Those of us who had kids in each age group received over 20 busy bags for our kids to play with! It was a great way to get lots of new activities for the kids without having the buy all kinds of supplies and find time to make them all.

Our family tradition is to decorate our tree on Gaudete Sunday. We usually purchase it on Saturday so that we can get it set up in our house and put the lights on while the kids sleep. Then after church on Sunday, we pull out the decorations. This day went down as one of the cutest days ever! Seeing the kids looking through the boxes, pulling out and playing with decorations, being delighted in everything, and hearing Philip's comments was priceless. That evening, we put the kids in their pjs, made them sippy cups of chocolate milk, and went out looking at Christmas lights. Such a fun day! 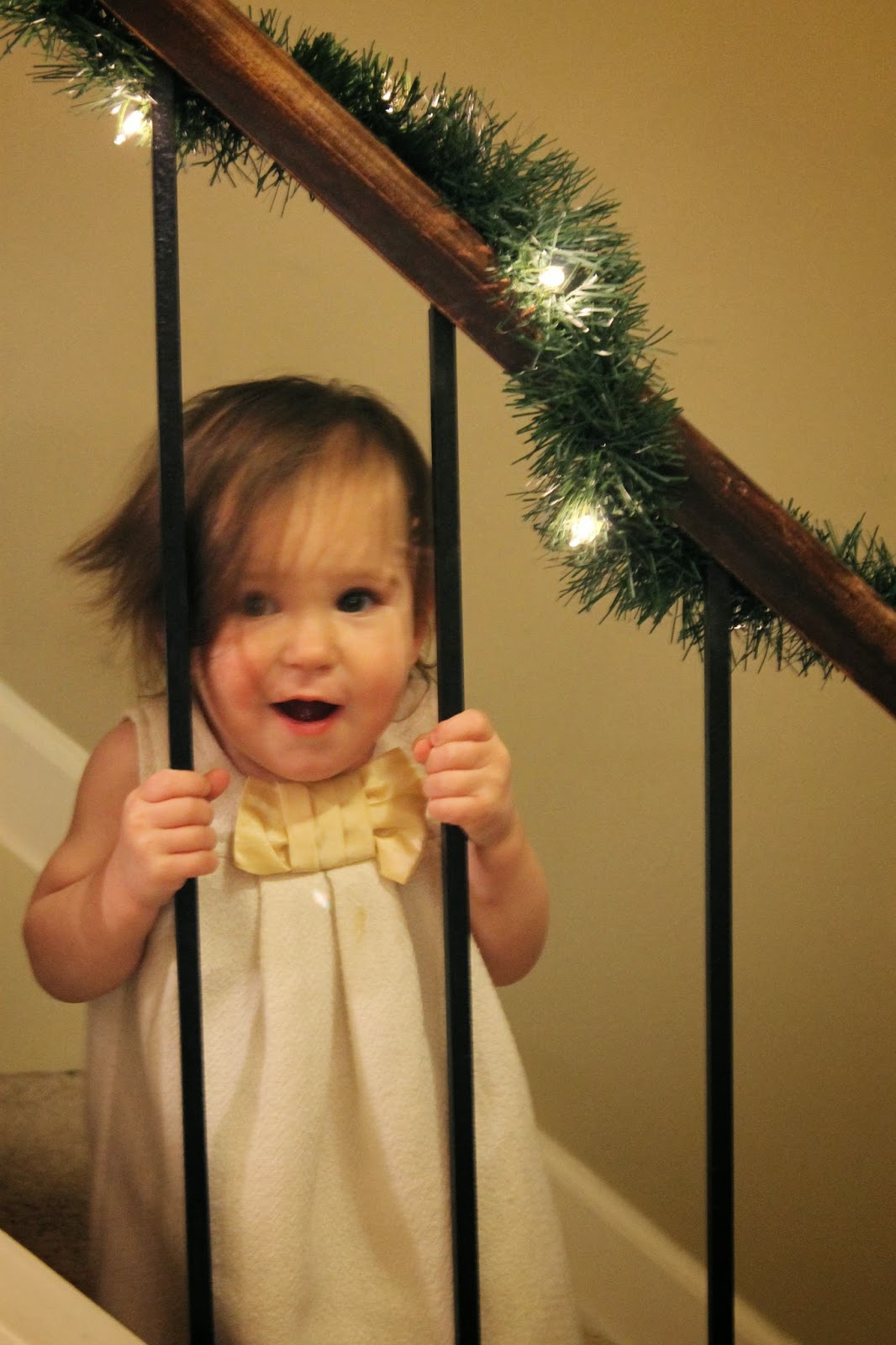 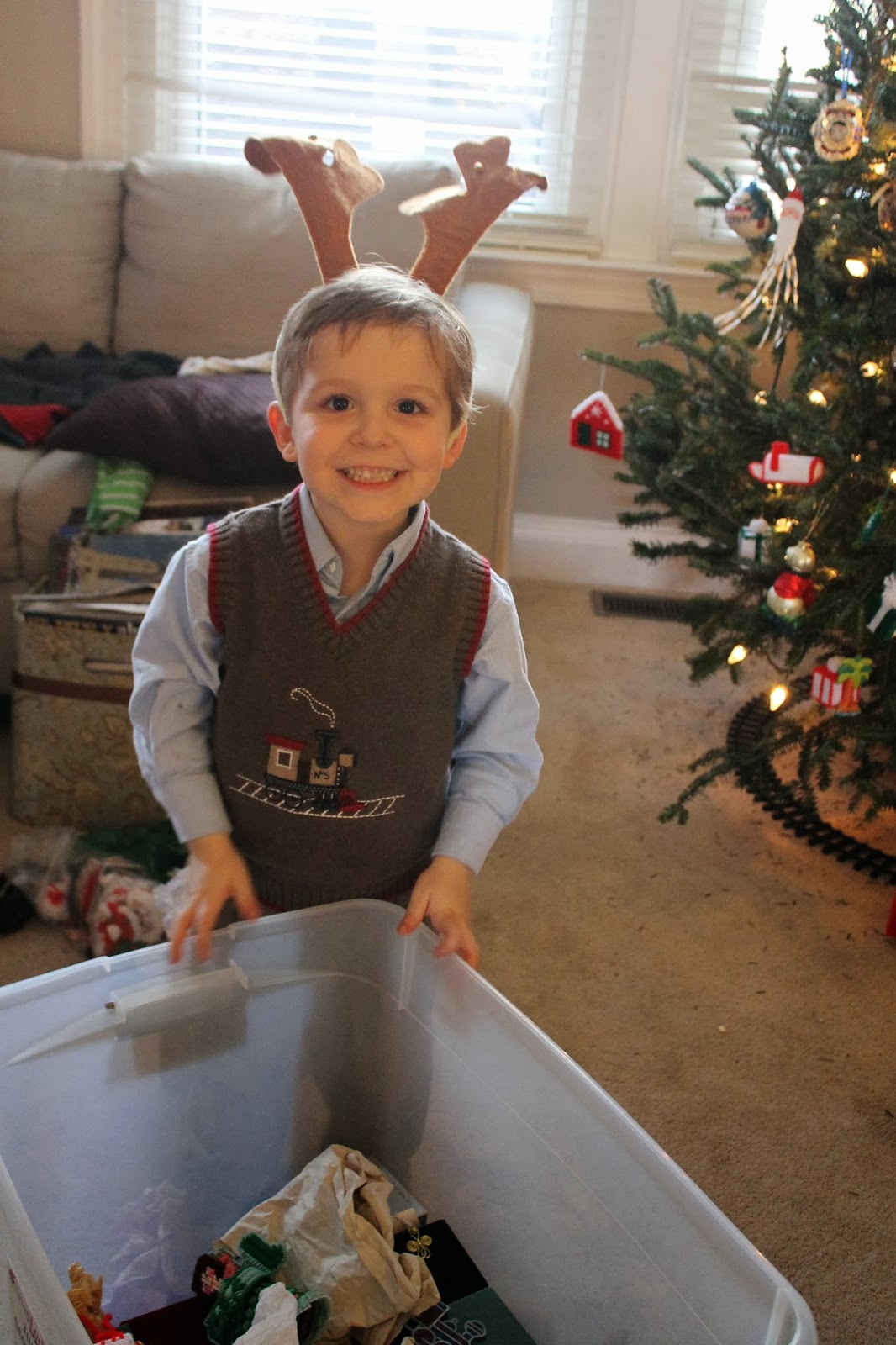 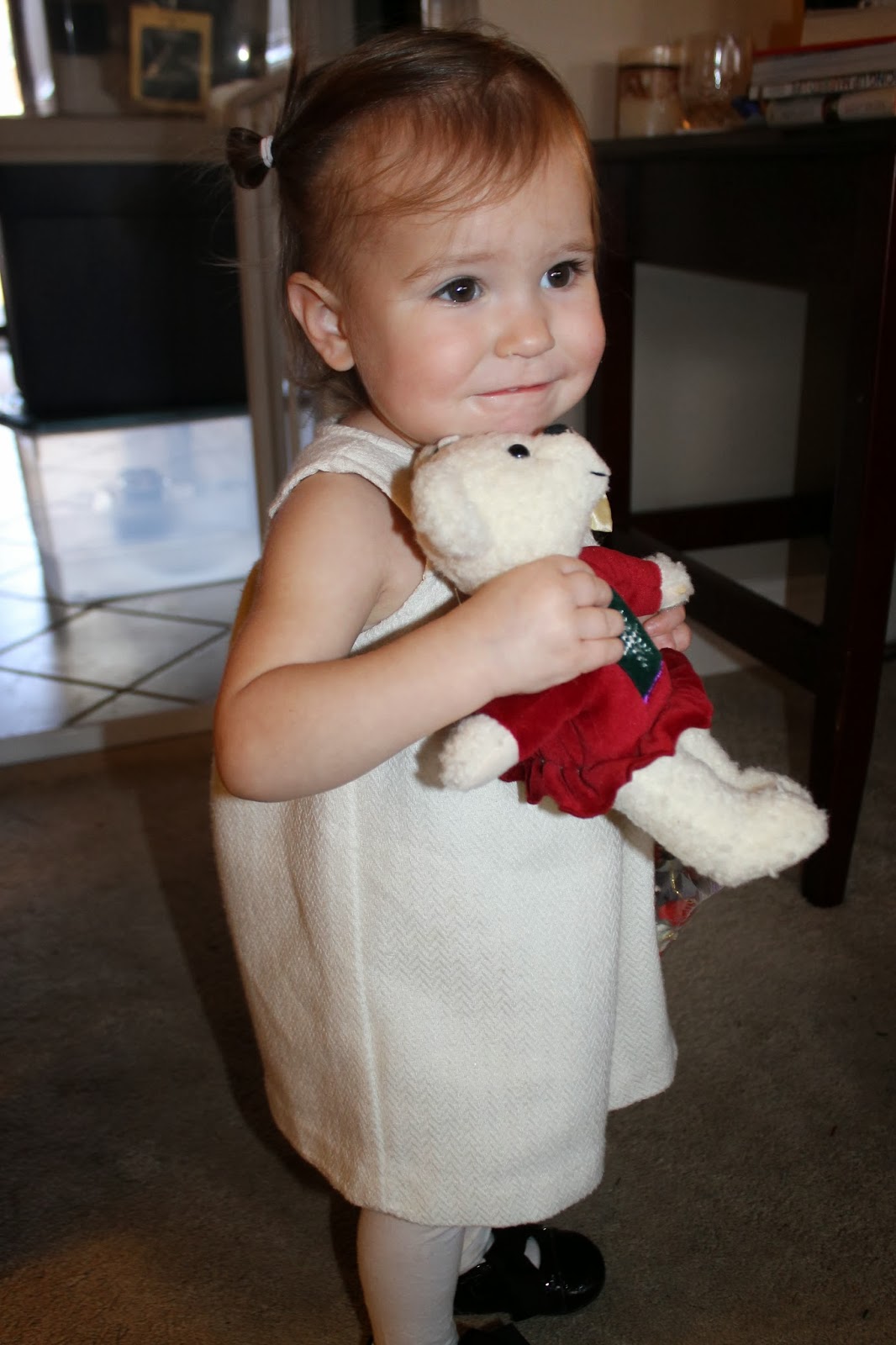 For Christmas, we went down to Andy's parents house. We stopped in North Carolina for a weekend to spend time with Andy's brother and family. We visited a great park where we took train and carousel rides, had ice cream bars, and played in the sand (the weather happened to be amazing that day!). Earlier in the day we were all optimistic about taking the kids to a nice restaurant across town - once dinner time came around and we had five wild kids running through the house, we decided that we hadn't been thinking clearly. We ditched the original plan and went to Golden Corral where our family fit right in and the kids ate to their heart's content!

Philip with his "brothers": 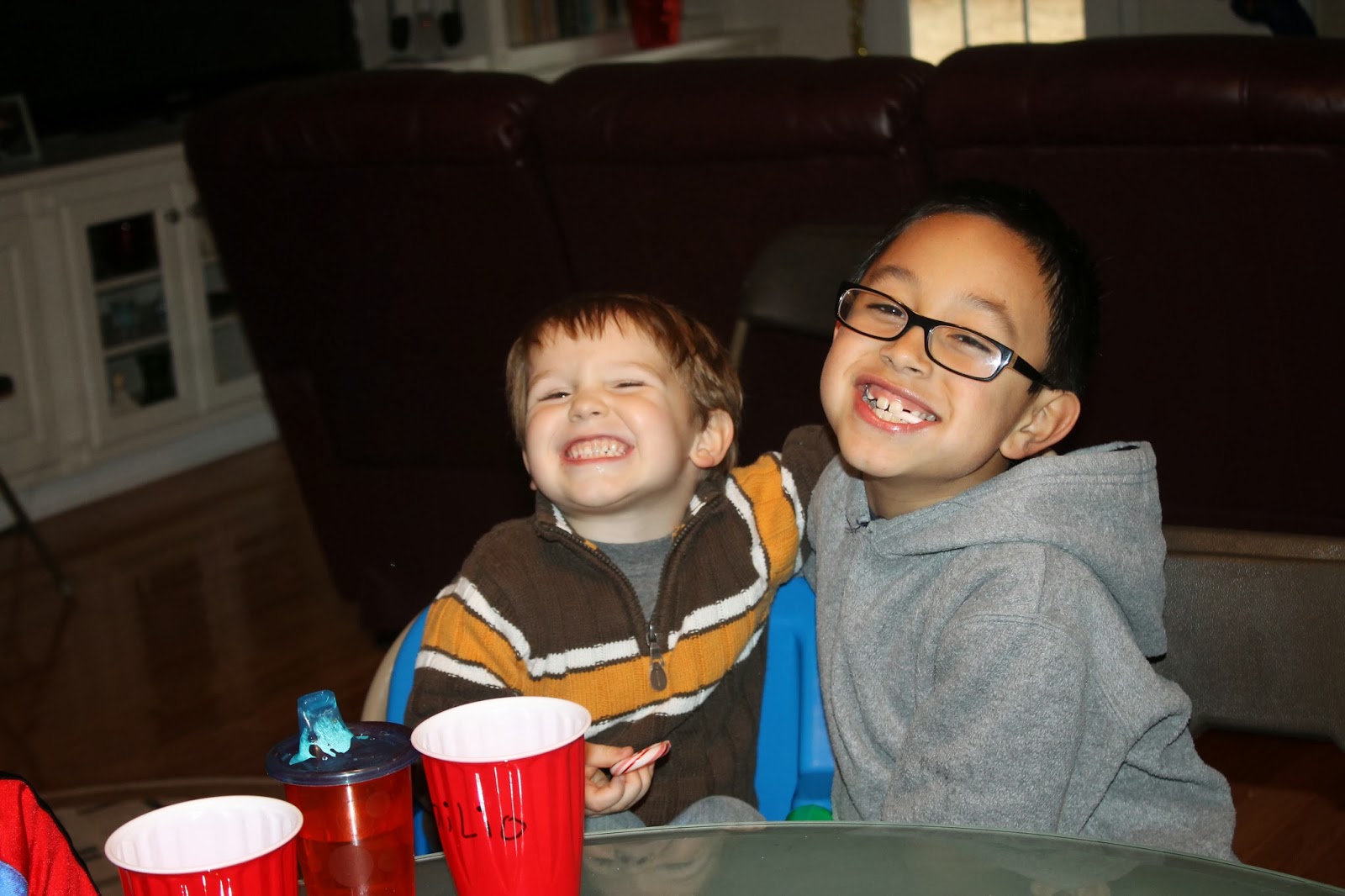 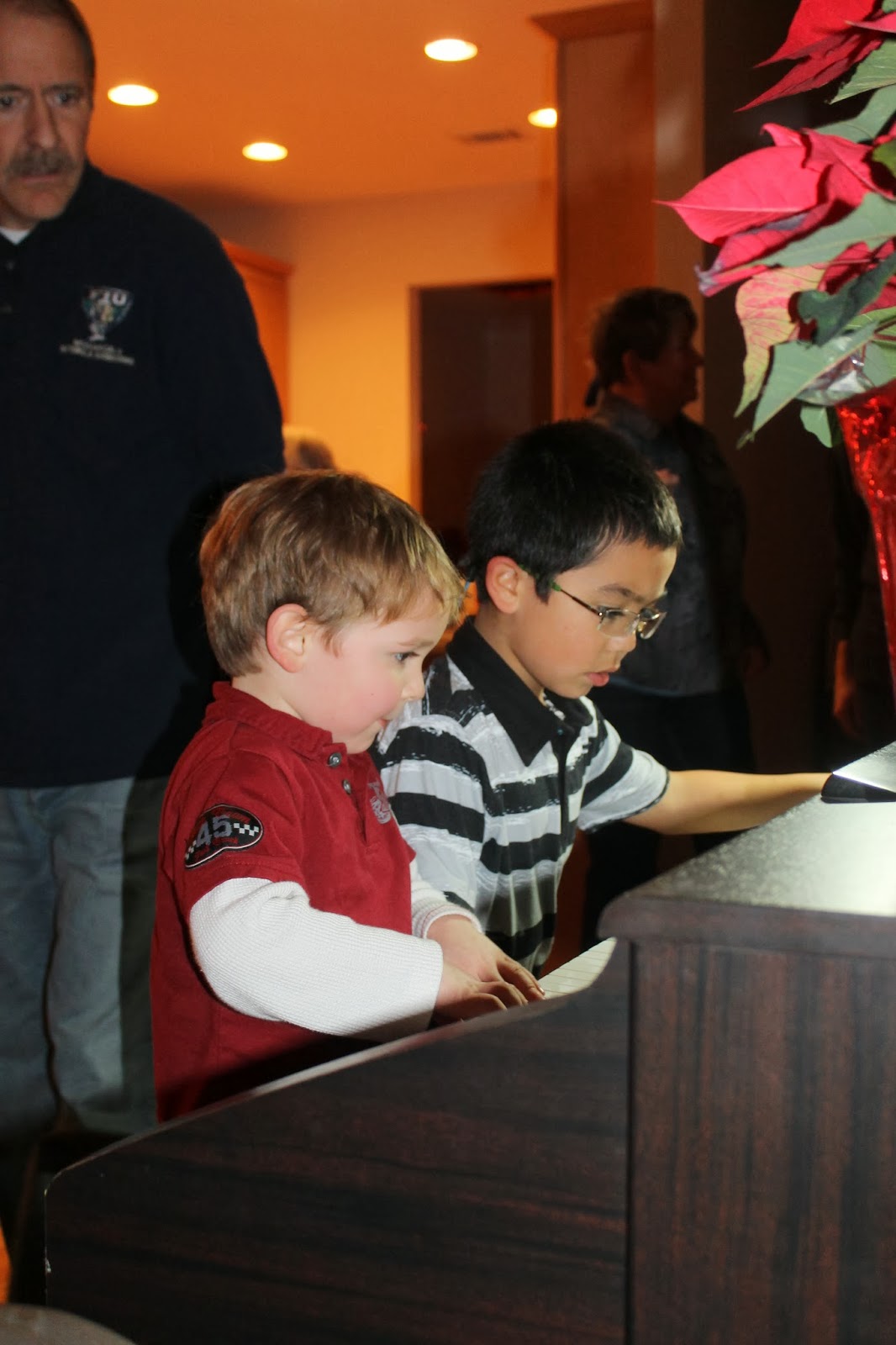 After two wonderful days with family, we packed up and went down to Grandma and Grandpa's house. Christmas was wonderful! Julia was happy with her first present and didn't want to open anymore. Philip was more than happy to help once he had finished all of his. As he would open her presents, she would say her new word of the month, "Mine" (or, as she learned from Philip, "My's") and then go on playing with whatever was in her hand. Grandpa surprised everyone by publishing a book he had been working on a few years ago, but had put aside for a while. It is tales from the family dog's point of view. For Christmas evening, all of Andy's siblings came to visit and we had great food and a great time catching up with family. 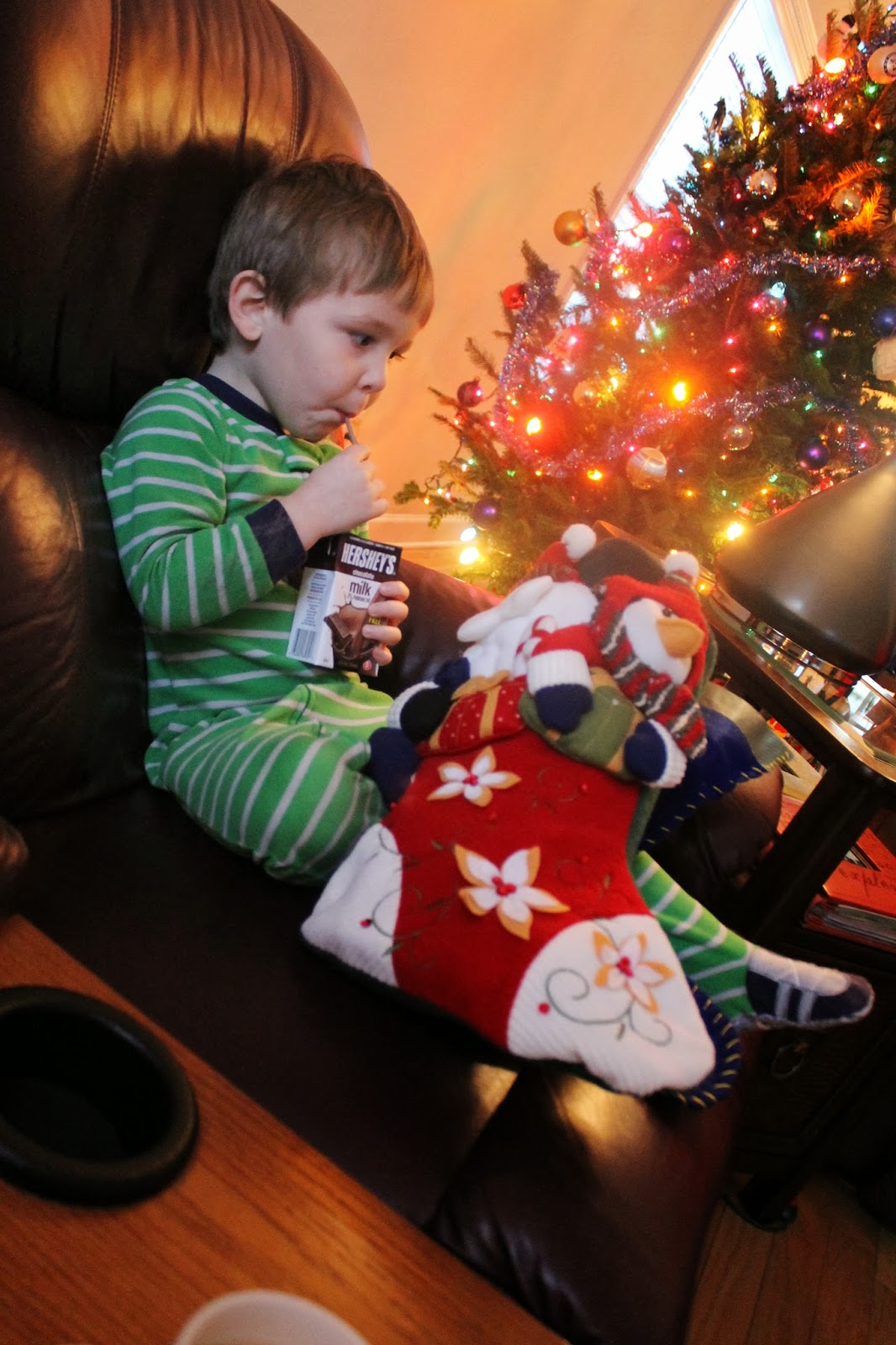 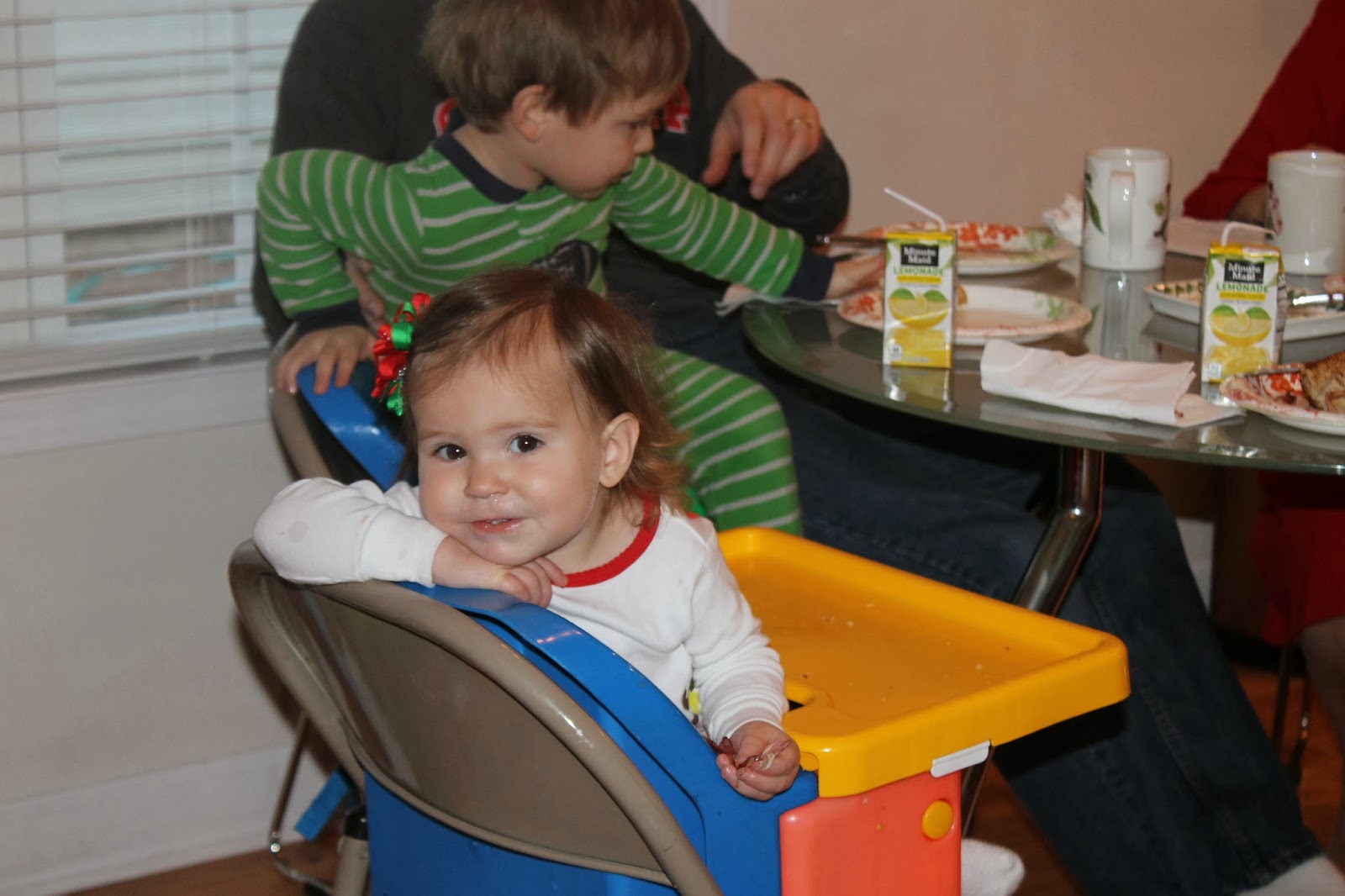 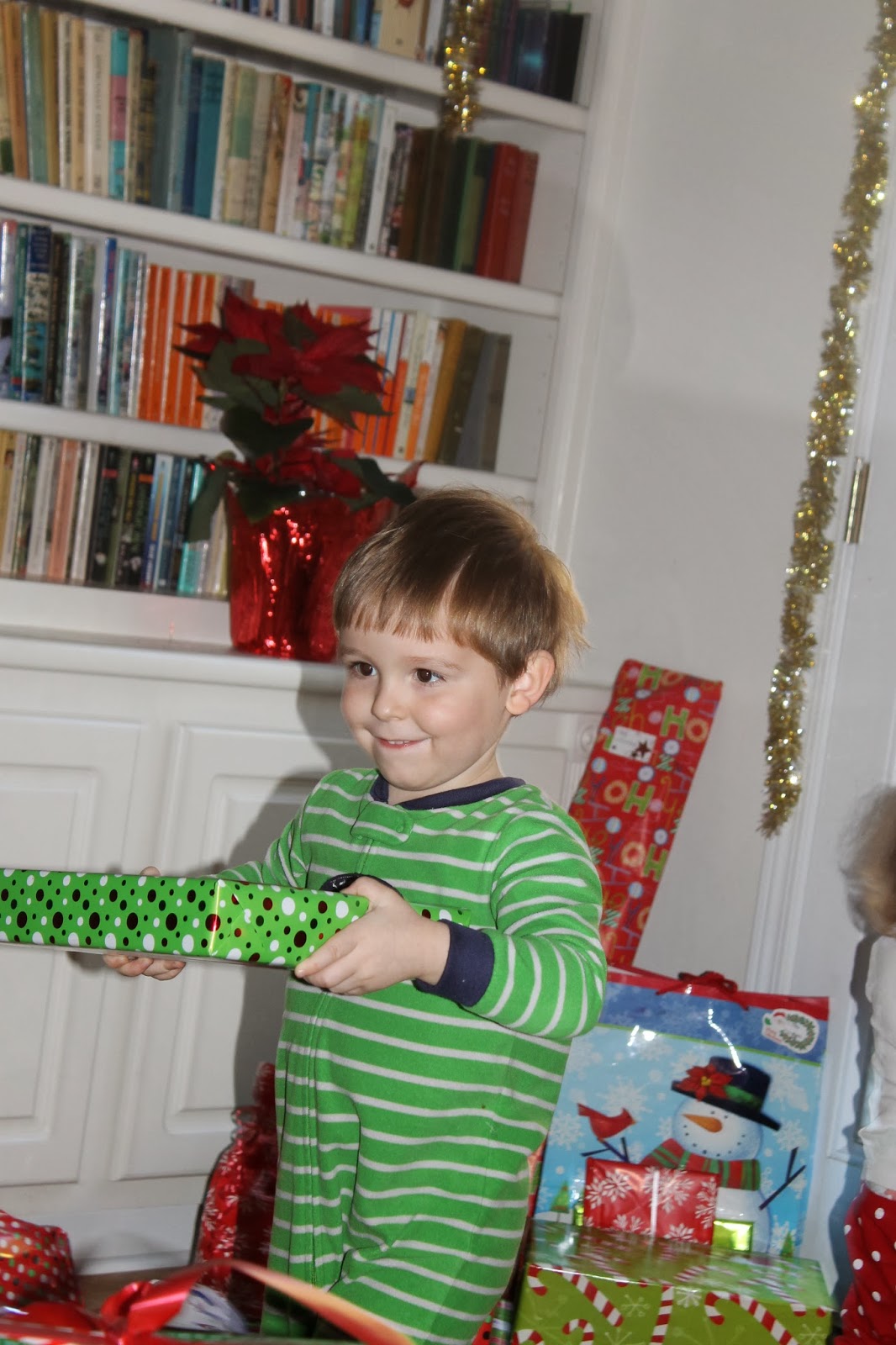 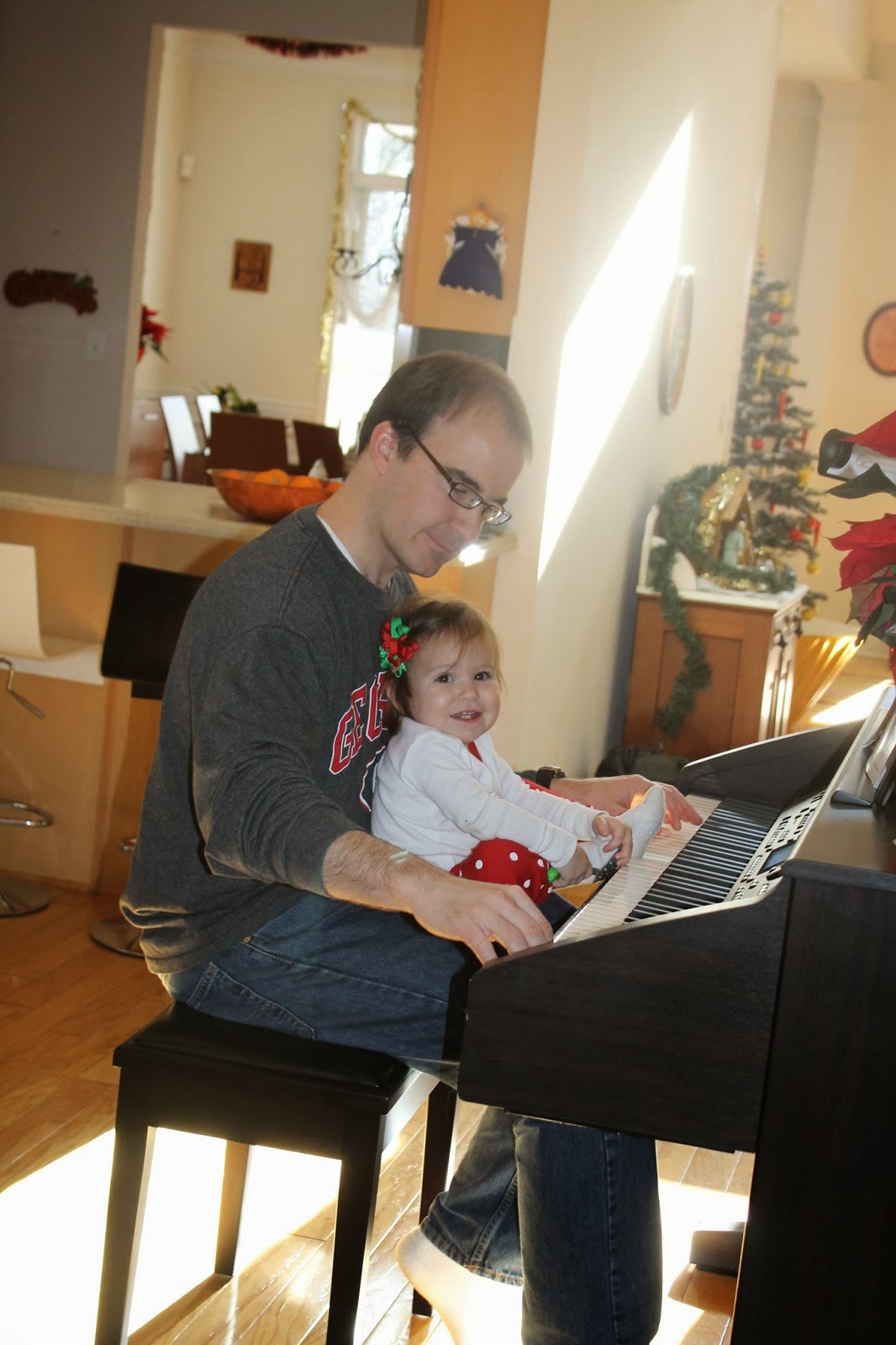 The next day, Andy's parent's took us up to their mountain property for the day. The kids loved exploring. The weather, which had been freezing for a few days, was warm enough to be comfortable, and we had a great visit with Andy's aunt, uncle, and dog, who met us there. That evening, Andy's parents were kind enough to watch our kids while we went out to dinner and a movie (Saving Mr. Banks). Andy thought the premise for the movie (the making of Mary Poppins) sounded like the most boring thing ever, but we both really enjoyed it. 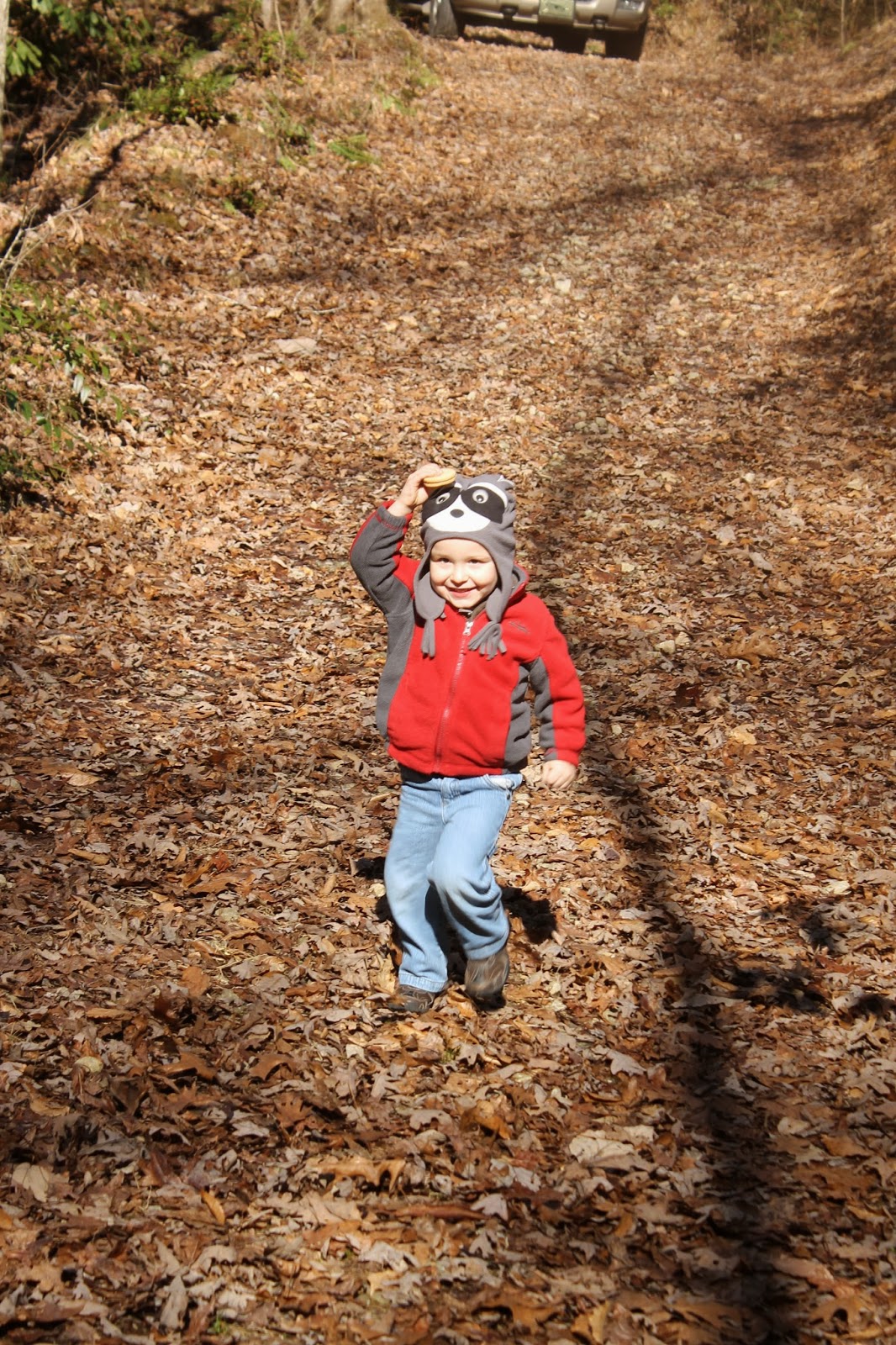 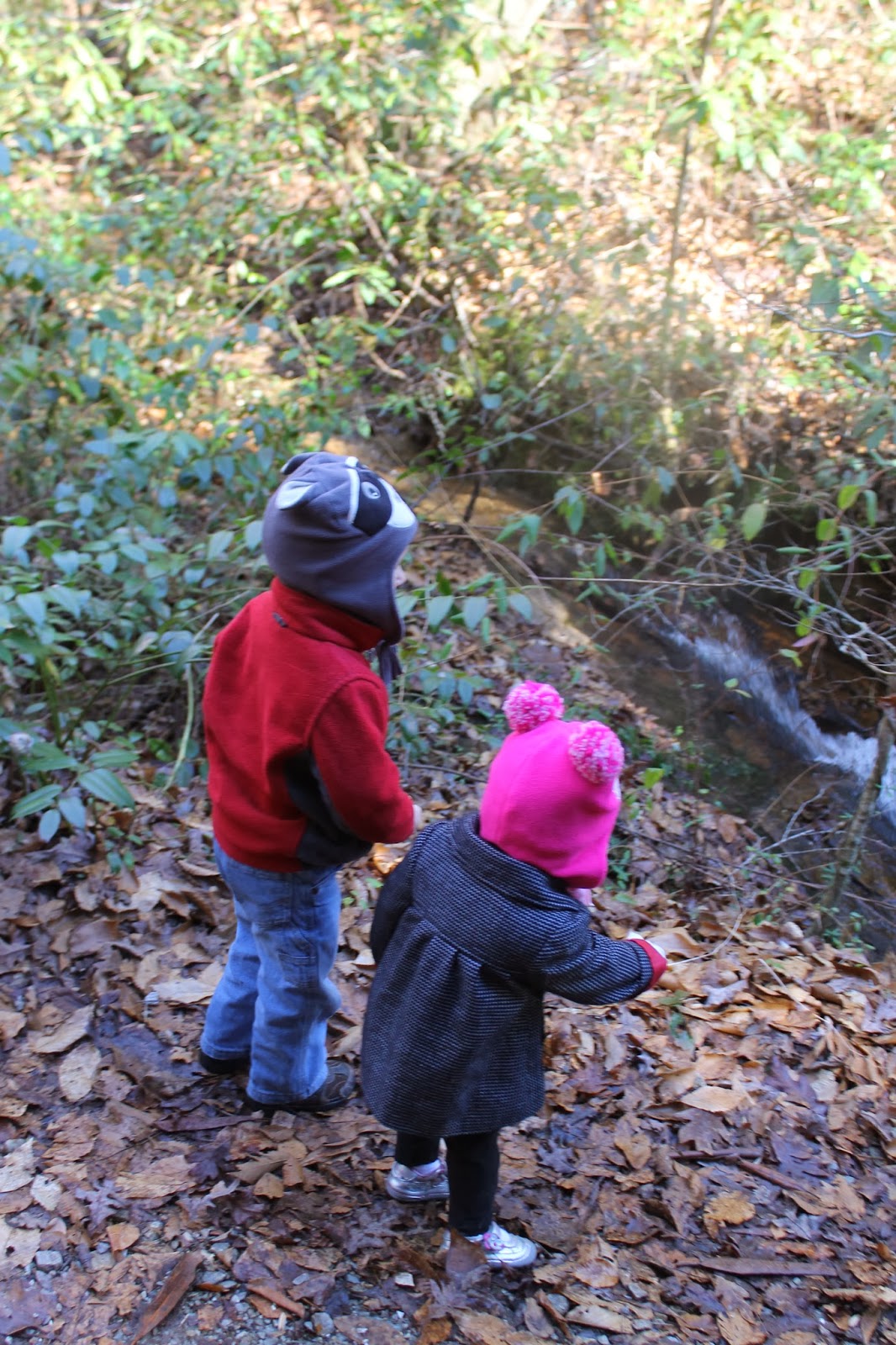 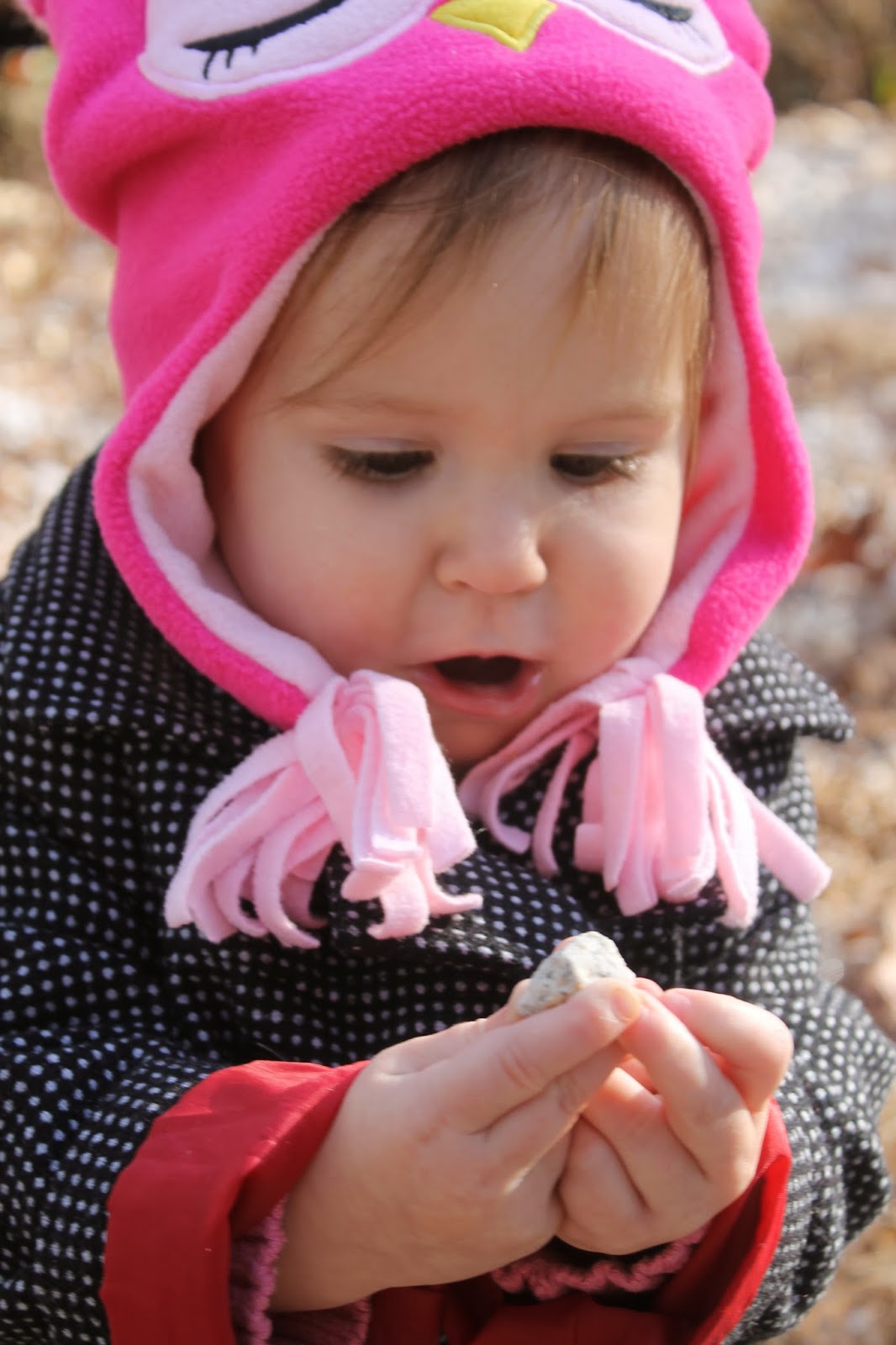 Wow! A rock!
Grandma and Grandpa treated all of the grandchildren to an hour at a trampoline park. The kids had a ball! Julia was a bit upset that she was relegated to the toddler jumping area - she wanted to be out on the big trampolines with the big kids! I wish I had a good picture, but I'm afraid I only brought my phone with me, so they are all blurry!

We enjoyed a dinner with Andy's friend from high school and his parents one evening. The kids had a great time playing at the local park. We celebrated two birthdays. Andy jammed with his brother's and sister one night. On New Year's Eve, Andy's family gathered to share appetizers, drinks, Christmas cookies and board games. The kids stayed up way too late and we had a great time catching up with family again. 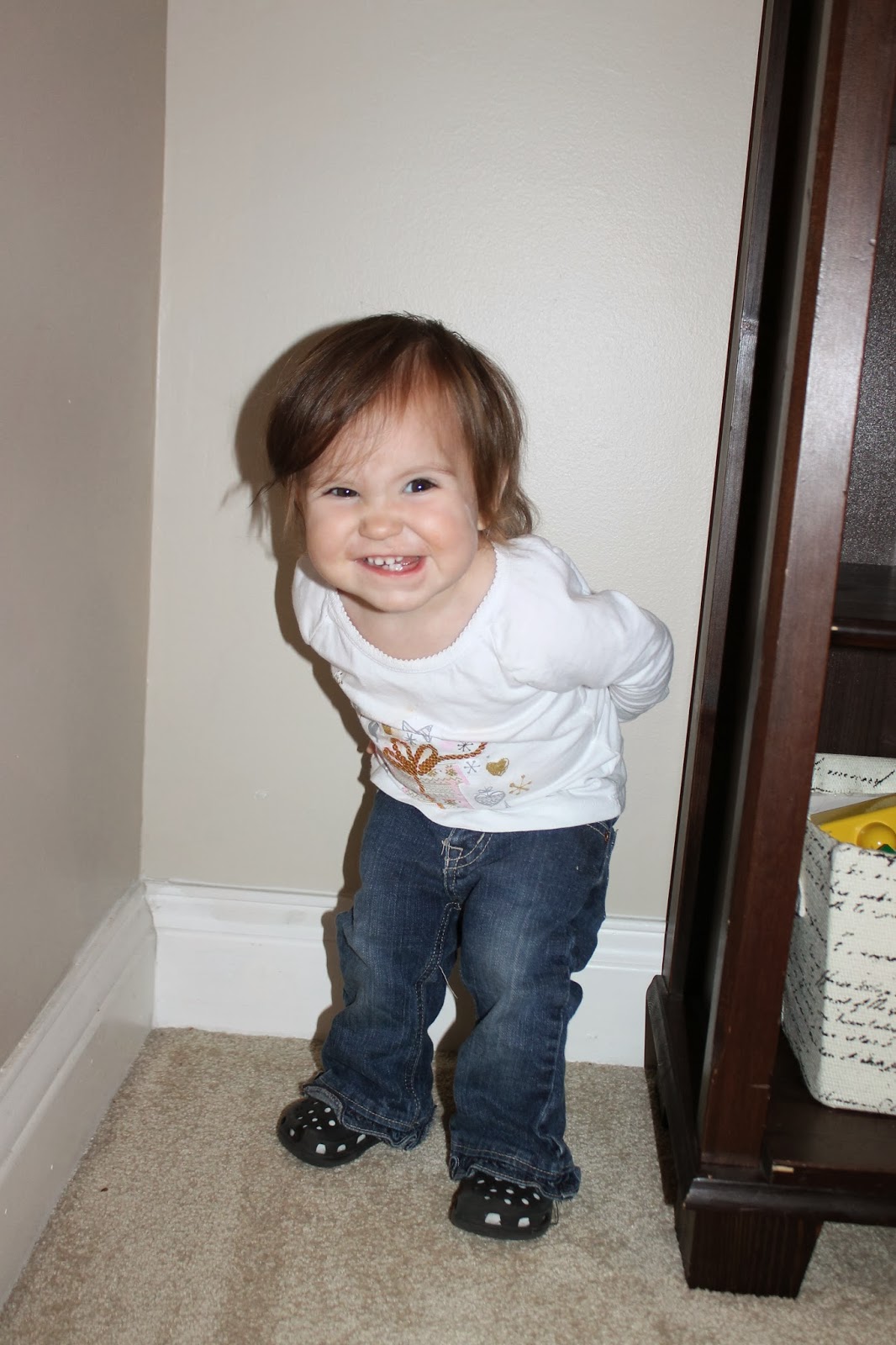 In kid news, Julia (16 months) broke one tooth and two molars this month. She called any animal she saw, and plenty of other random objects, "A Puppy!" She calls any holy image she sees, "Jesus." That includes Mary, the saints, and even a picture of Cardinal Wuerl she saw in church this weekend! Julia has finally gotten into reading books and I can't tell you the number of times a day she would bring me her Little People Lift-the-Flap Farm book to read with her. She also started to learn how to go downstairs. She tries both backing down and walking down with help. It scares me when they start doing that, but I try to remember how helpful it will be when she masters it.  She walks around all day, holding her arms like a cradle and rocking them back and forth while saying, "Babee, babee, babee." We learned the sign for Jesus this month, so she spent lots of time looking at Nativity sets and signing Baby Jesus. I was tickled when I walked in from a run one morning over Christmas vacation and saw her leading all of her older cousins in saying and signing, "Babee, babee, babee." 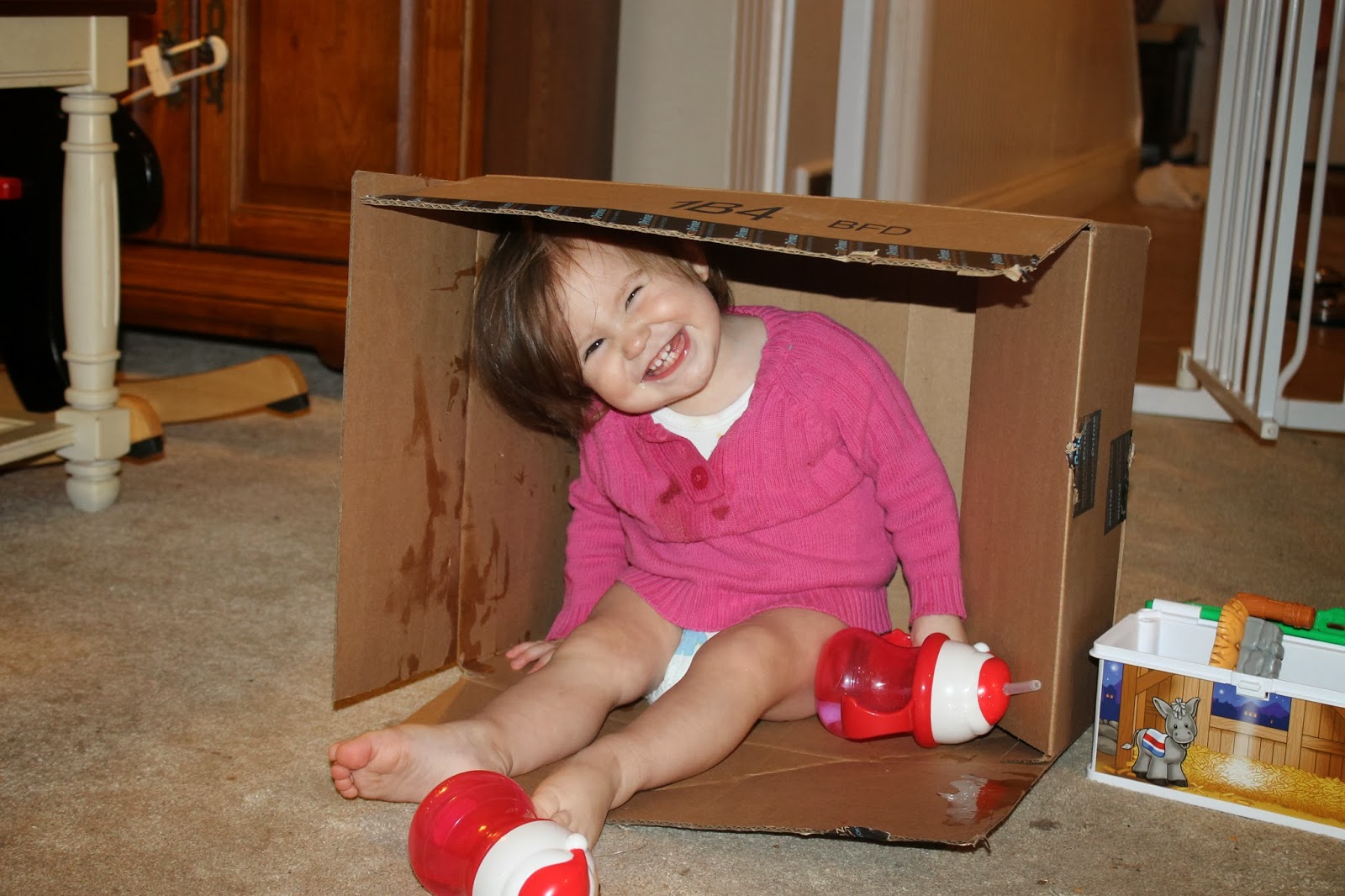 Look what the delivery man brought!

I let Julia play with Philip's "construction site" for the first time and she was just as enamored with it as Philip. That is the best activity I ever put together for those kids! It is messy, but I don't know how many hours of time it has kept my kids occupied - well worth the mess! 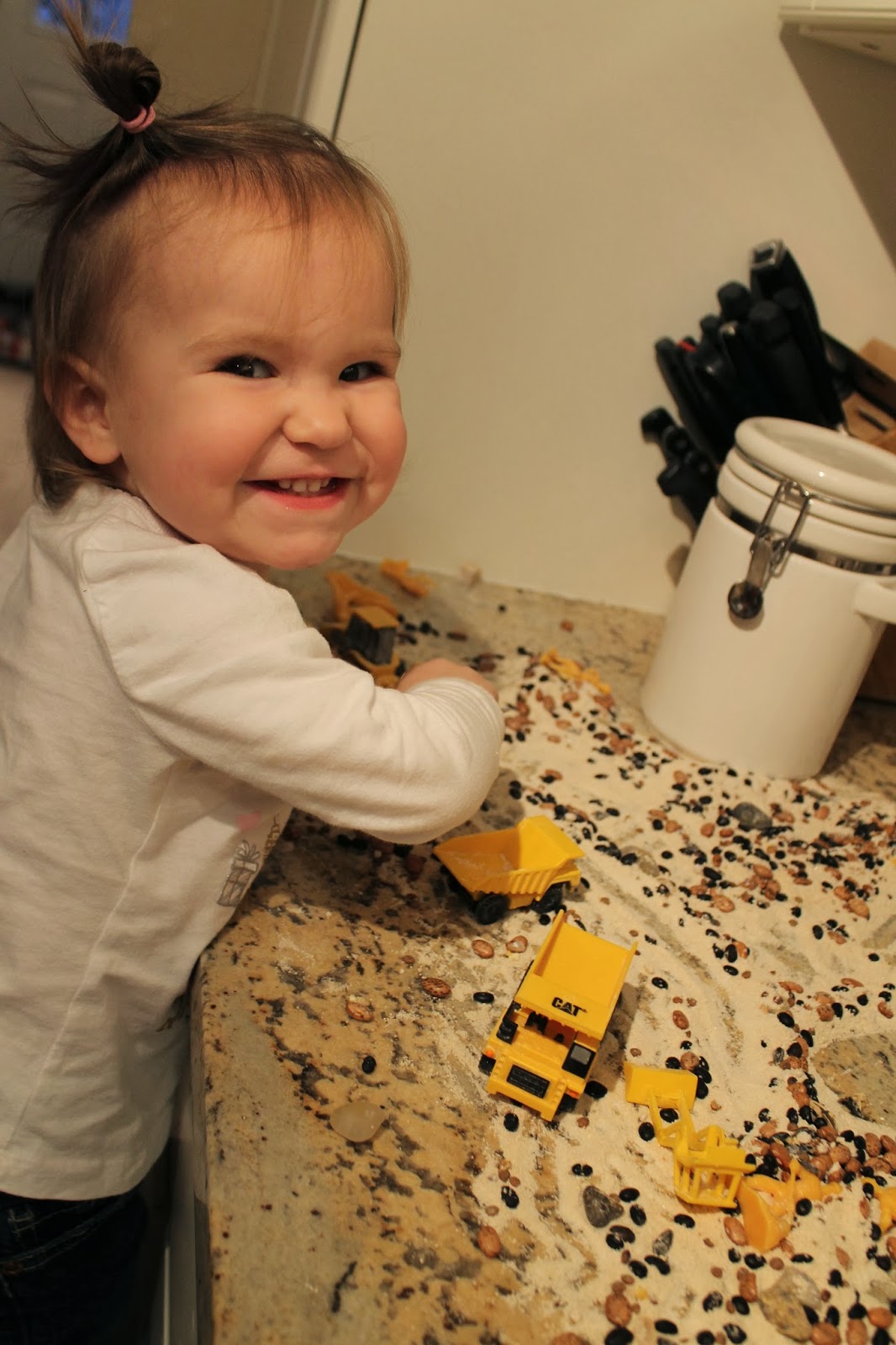 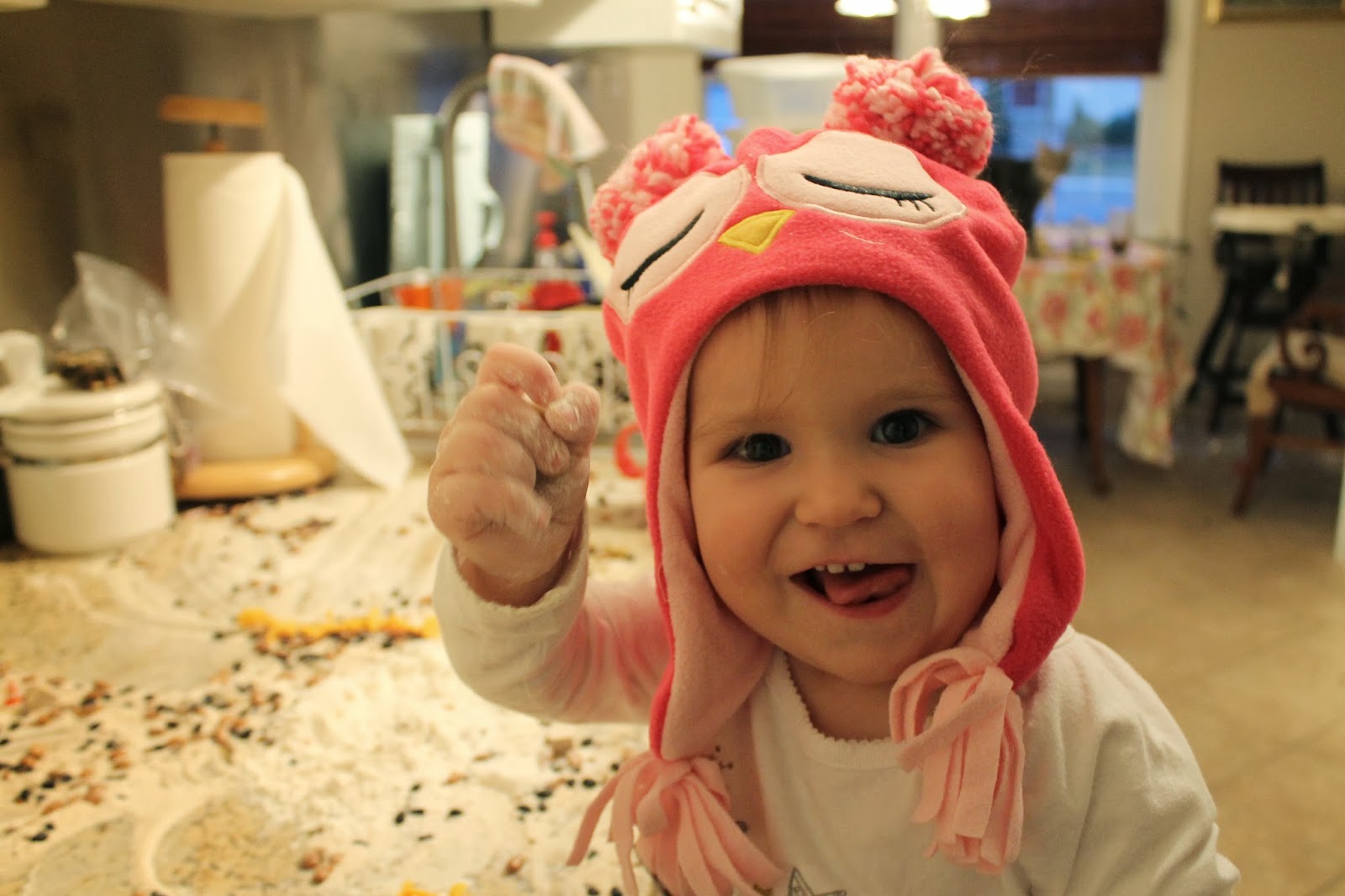 If only it was that easy to get them little again! 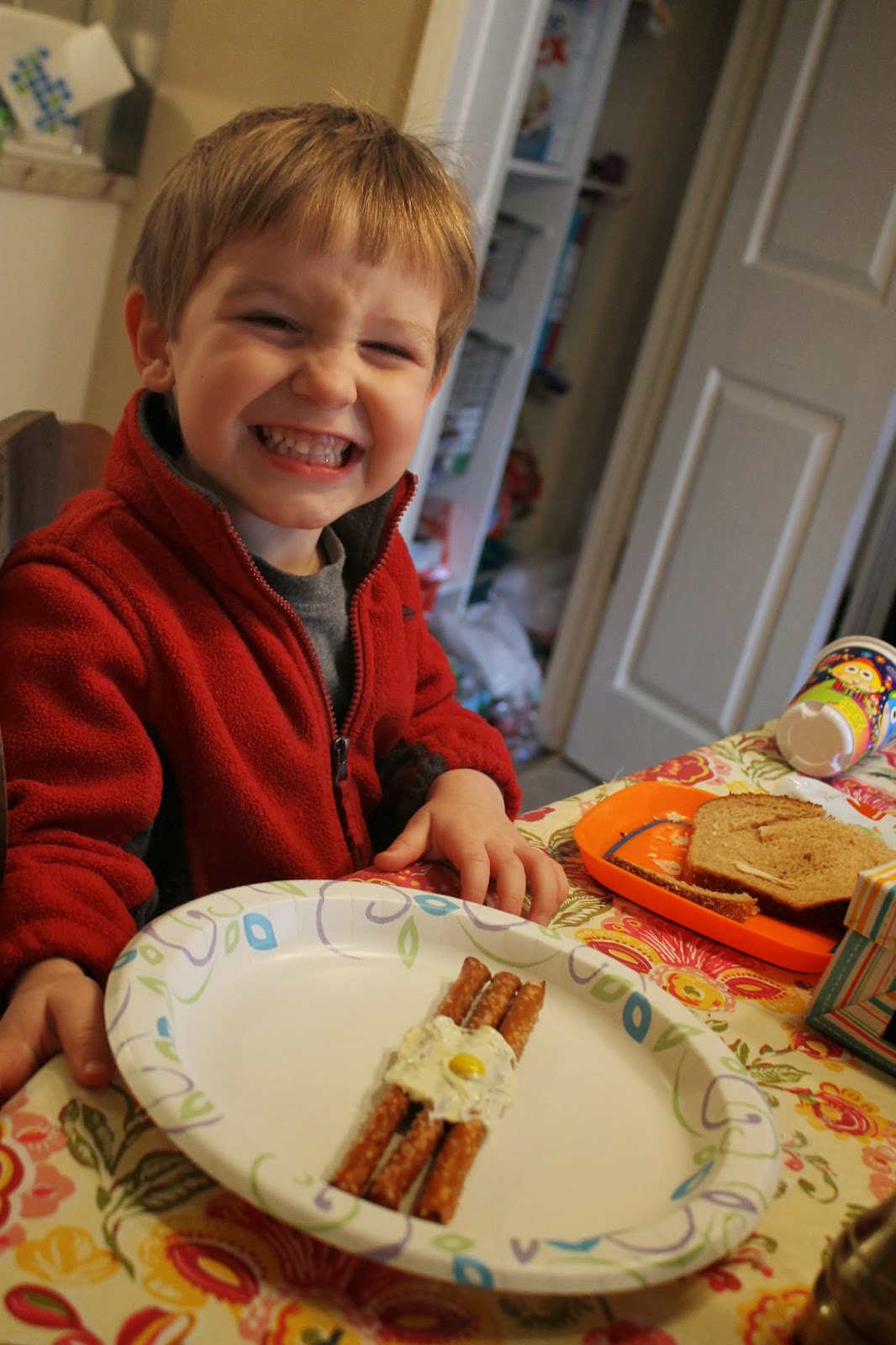 Philip's phrases of the month were: "I hungry all day." "I play all day." "I got a (i)dea!" "I too full/tired." (he says this when he wants to get out of anything - going potty, eating dinner, though he has plenty of room for dessert, etc.) He also randomly says, "Not the same" all the time and usually out of context. He really made a lot of improvements in potty training over the last couple of weeks, but we are still in-process. Julia also continued using the potty at least once or twice a day - I have high hopes that she will be potty trained waaaaay earlier than her brother! After randomly asking where our tree went for the last six months, Philip was very happy to have a Christmas tree back in the house again. 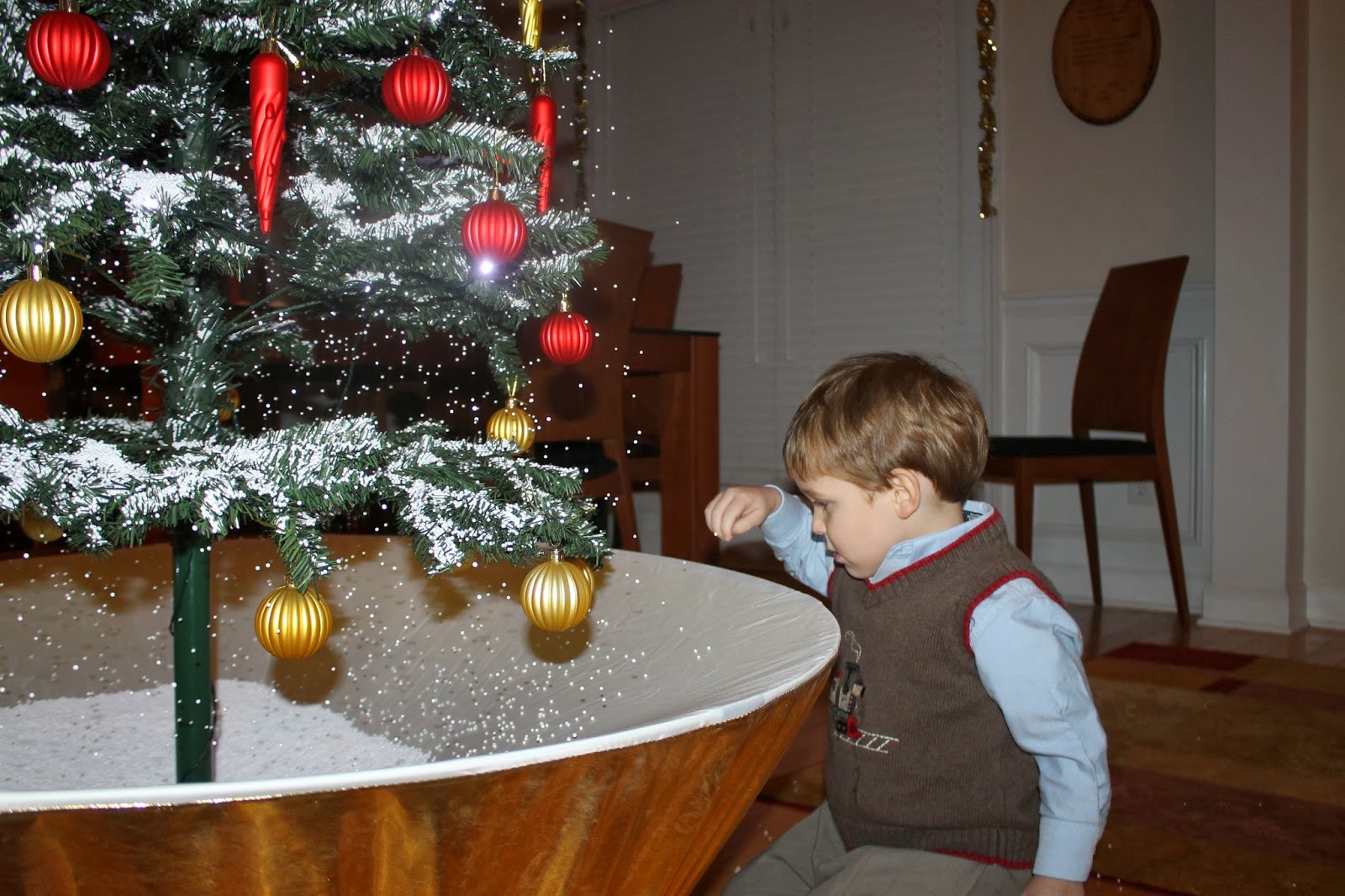 A highlight of our vacation was seeing the snowing Christmas tree Grandma and Grandpa had. Philip spent a lot of time playing in and making a mess out of the snow. One evening after the kids had eaten, but while the adults were still having their meal, he and his little cousin took Julia's new play kitchen pots and filled them with snow which they threw all over the living room. Luckily, 7 kids and 20+ grandchildren later, Andy's parents aren't too phased by anything!

A belated Merry Christmas and Happy New Year to everyone! Wishing you many blessing in the year to come!
Posted by Joy Complete at 12:01 AM