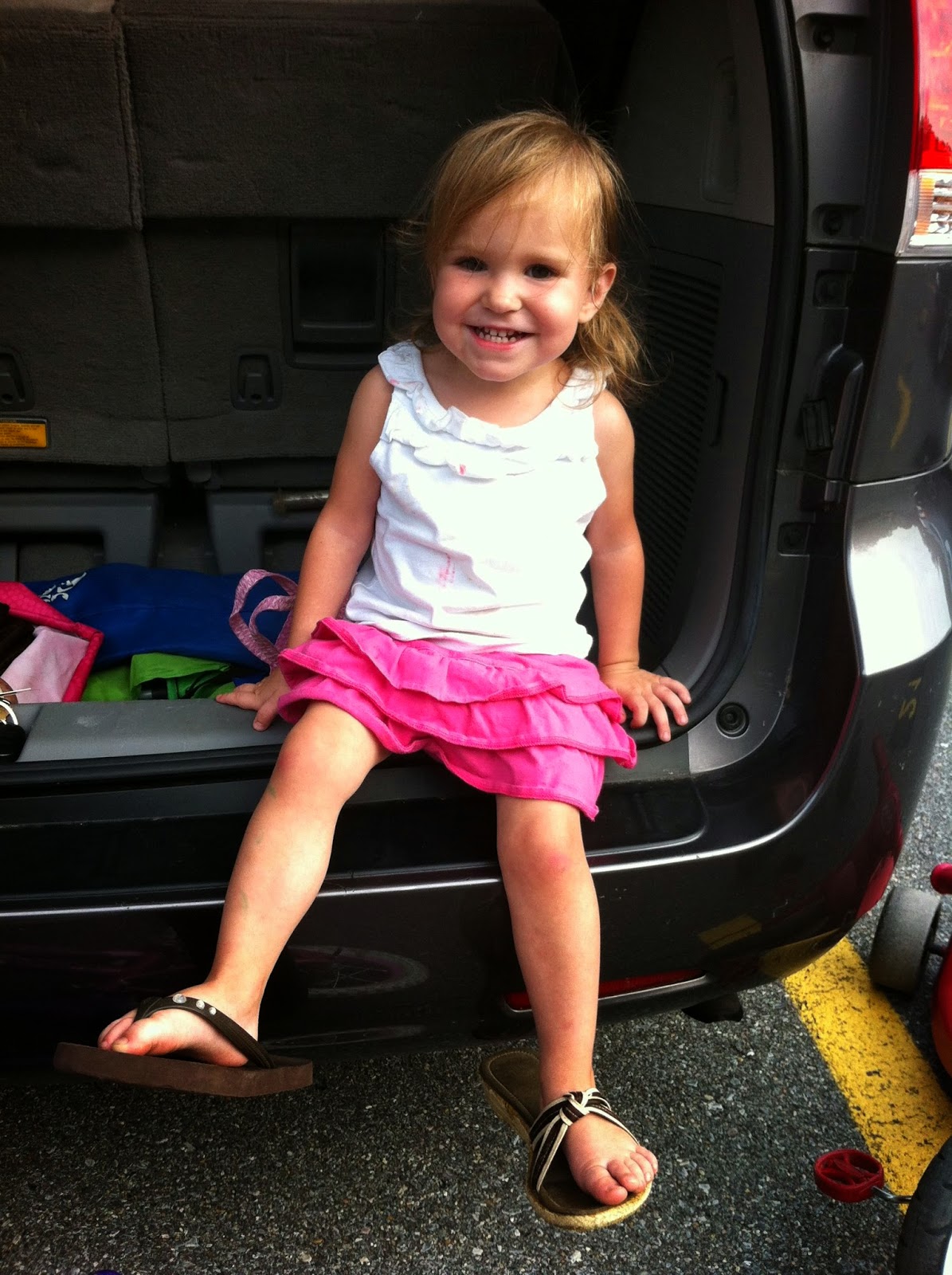 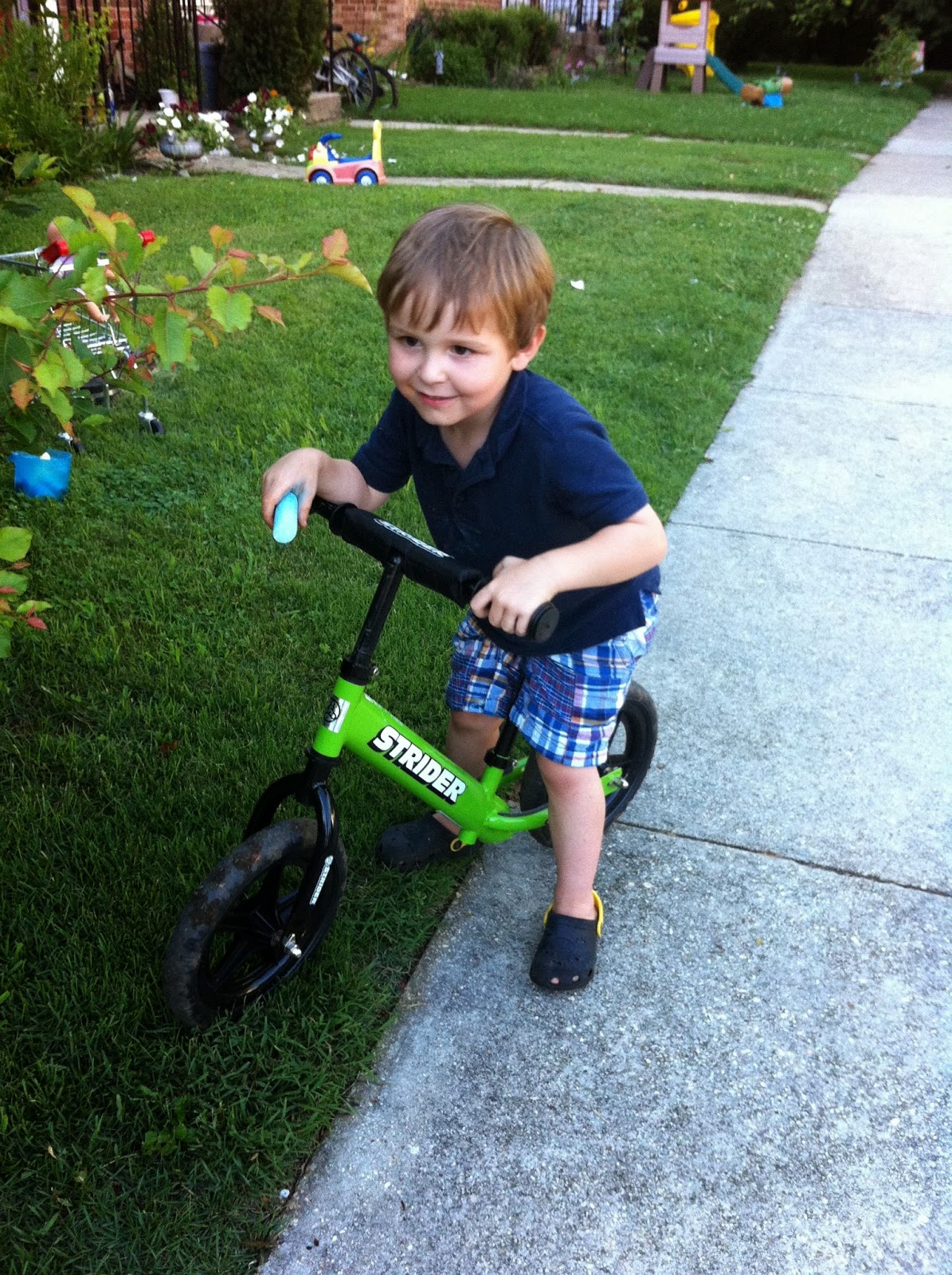 July was of course, highlighted by Philip's fourth birthday. Besides that, we had a fun month of summer activities. We went to going away parties and yard sales. I took the kids to see their first movie in the theater (Madagascar III). We made it through the whole thing, although it was scarier than I imagined, so no more movies for us this summer! 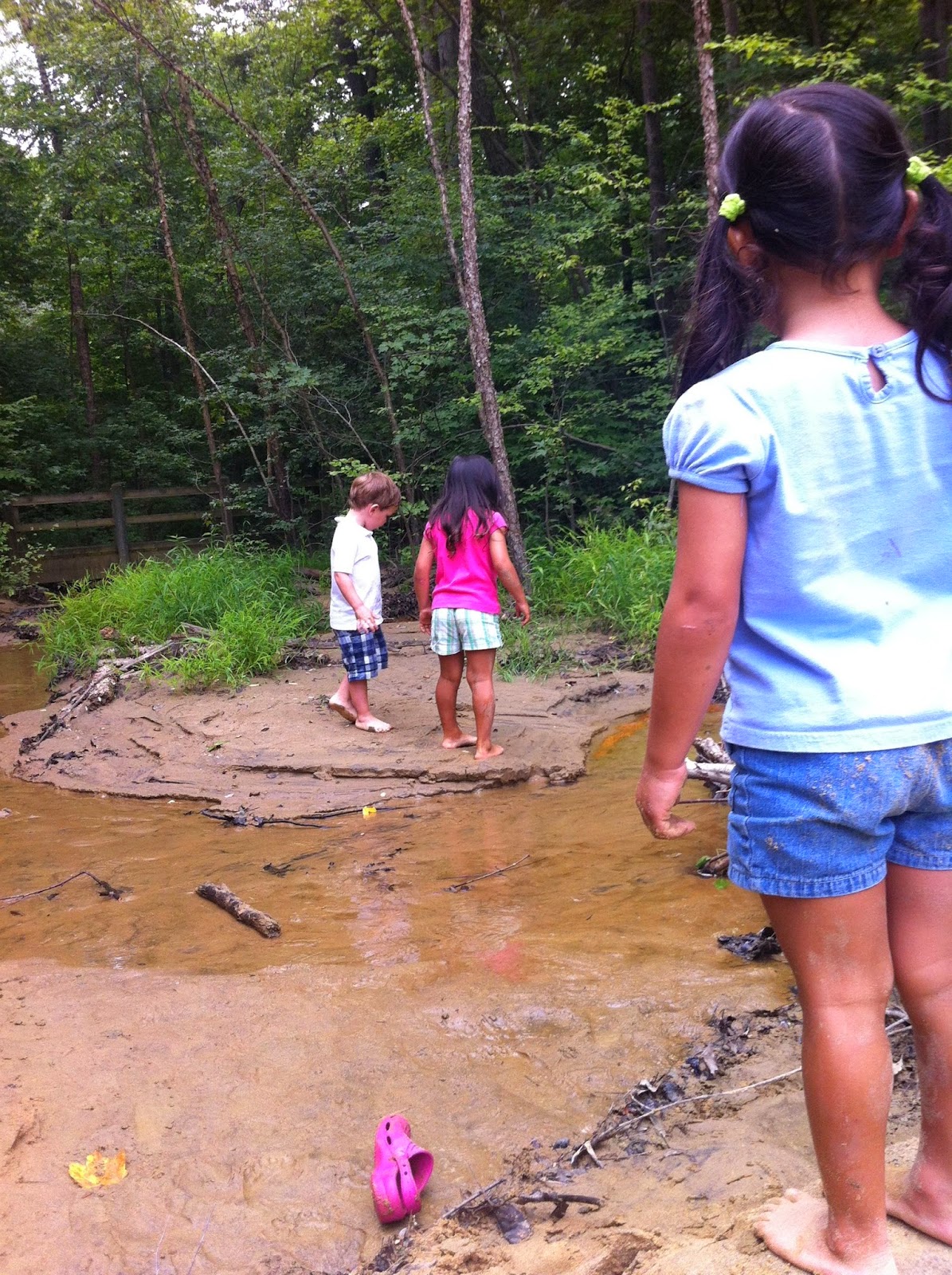 Our library had a lot of fun activities this summer and we attended several of them, including a magician, bubble lady, and an evening jazz concert. We also enjoyed several free Saturday evening concerts nearby. The kids love to get an ice cream cone and then play on the grass, far away from the band and crowds. 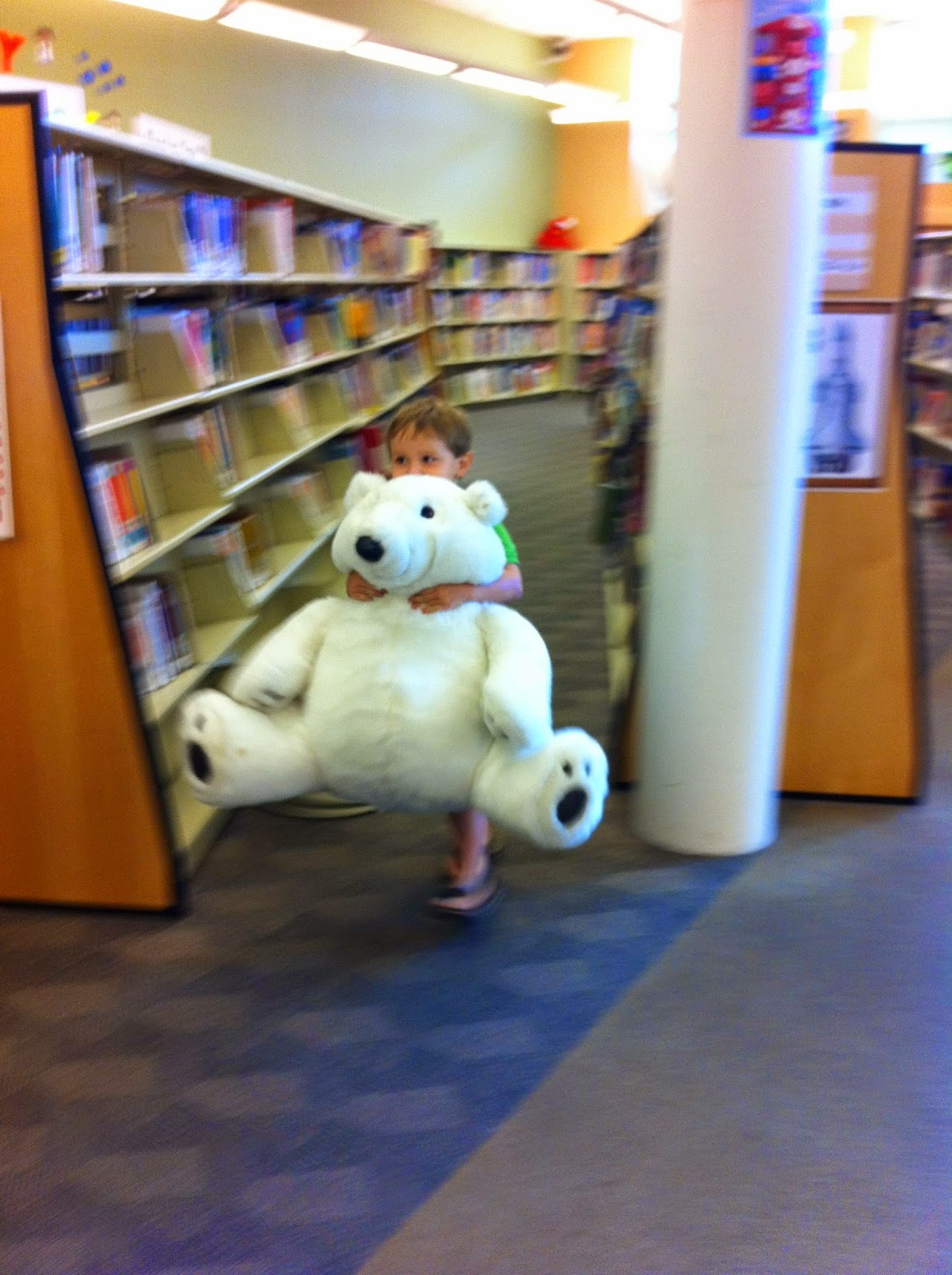 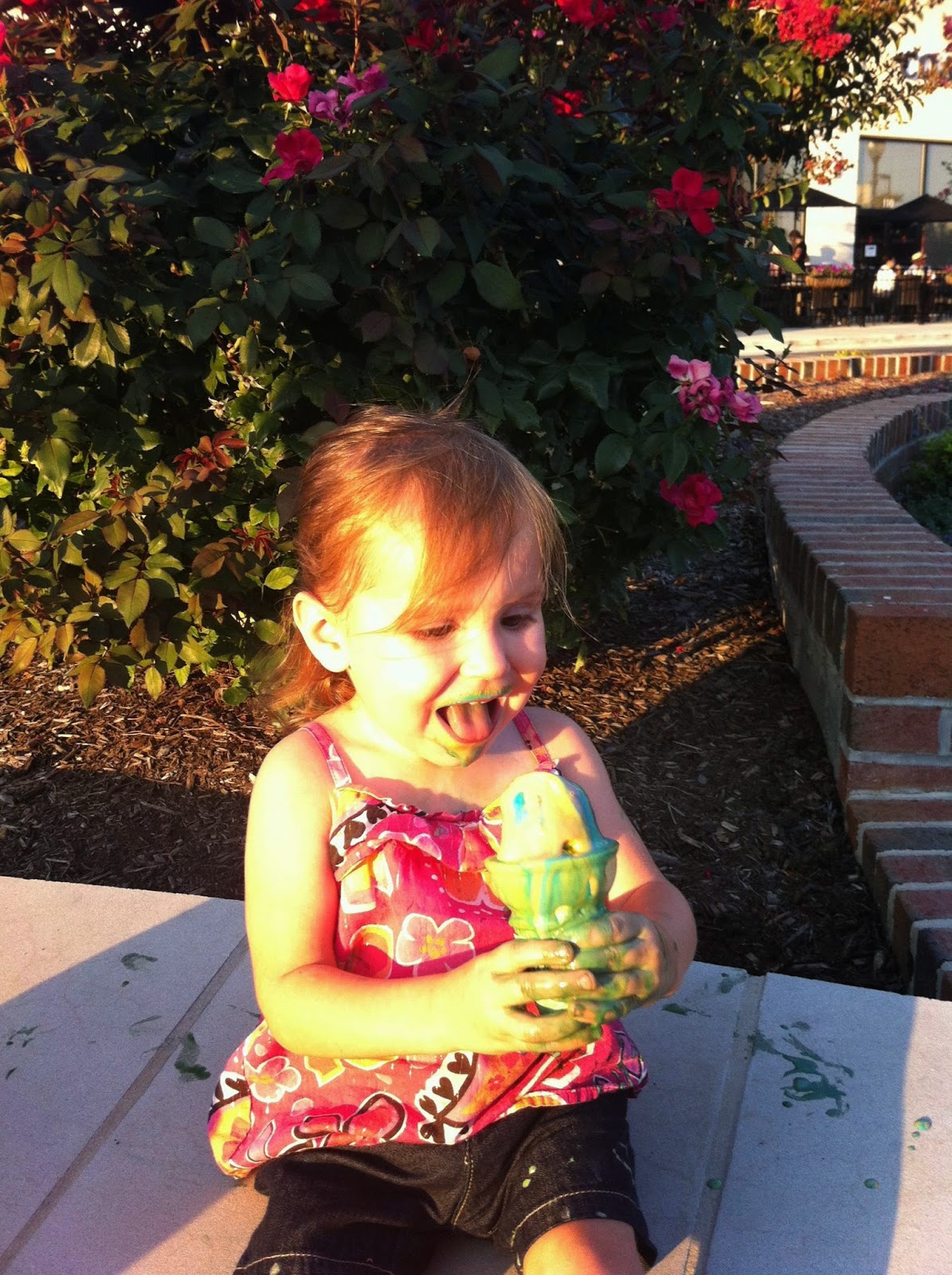 Our neighborhood always throws a 4th of July block party and this year we finally got a chance to attend it. The kids had a great time playing in the street, and the neighbors cooked up some great food on the grill. When the sun had set, we made it through a couple fireworks before the kids got scared and we had to come inside. We watched a couple fireworks shows on TV instead and had a great time. 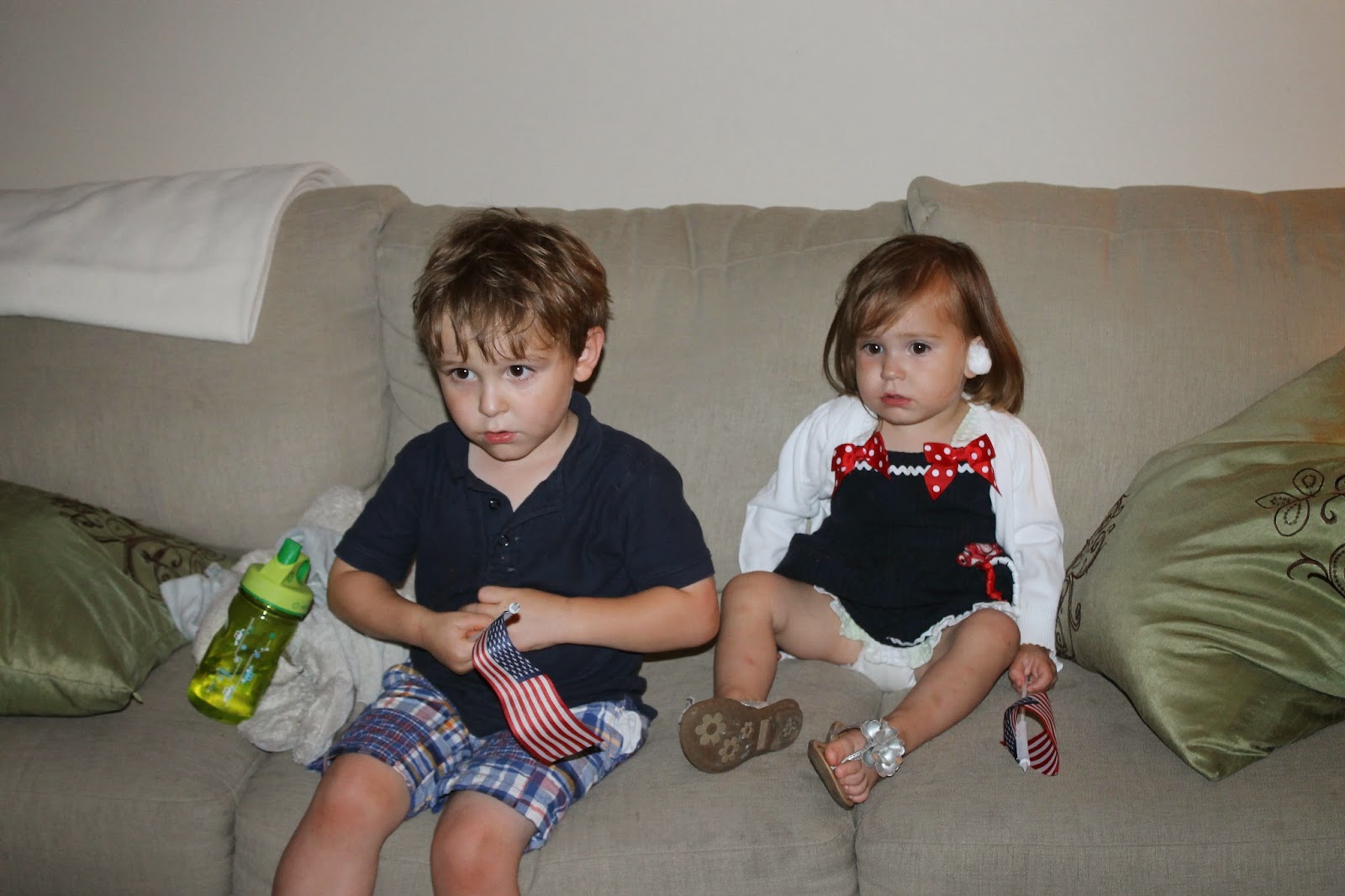 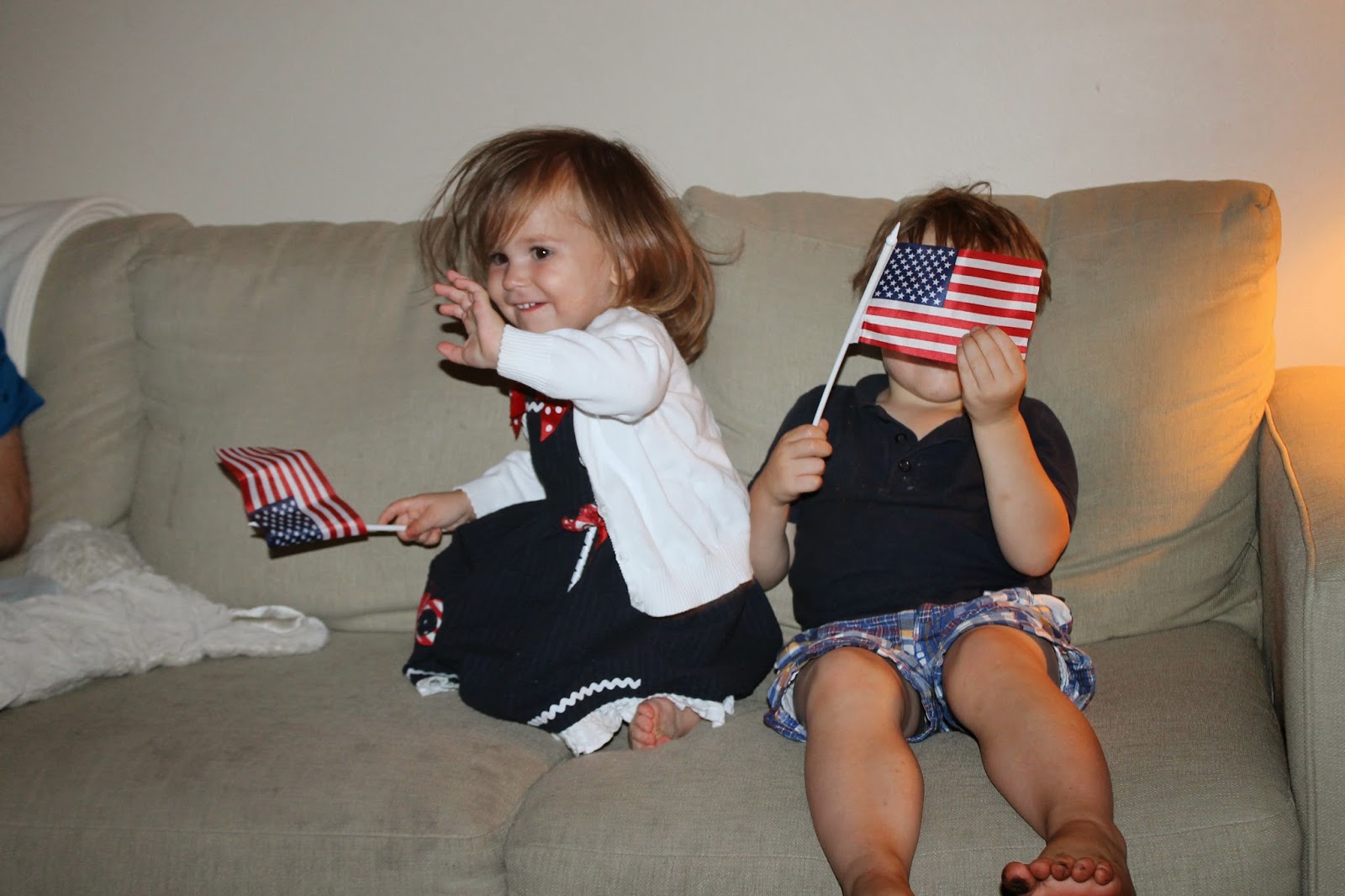 Getting into the spirit of the TV fireworks.
After talking about it for a couple years, we finally got together with two sets of our neighbors for a meal. Between the three couples, we have five 4-year olds (two sets of twins) and Julia. Everyone gets along great. We decided to plan a monthly dinner and rotate houses each time. 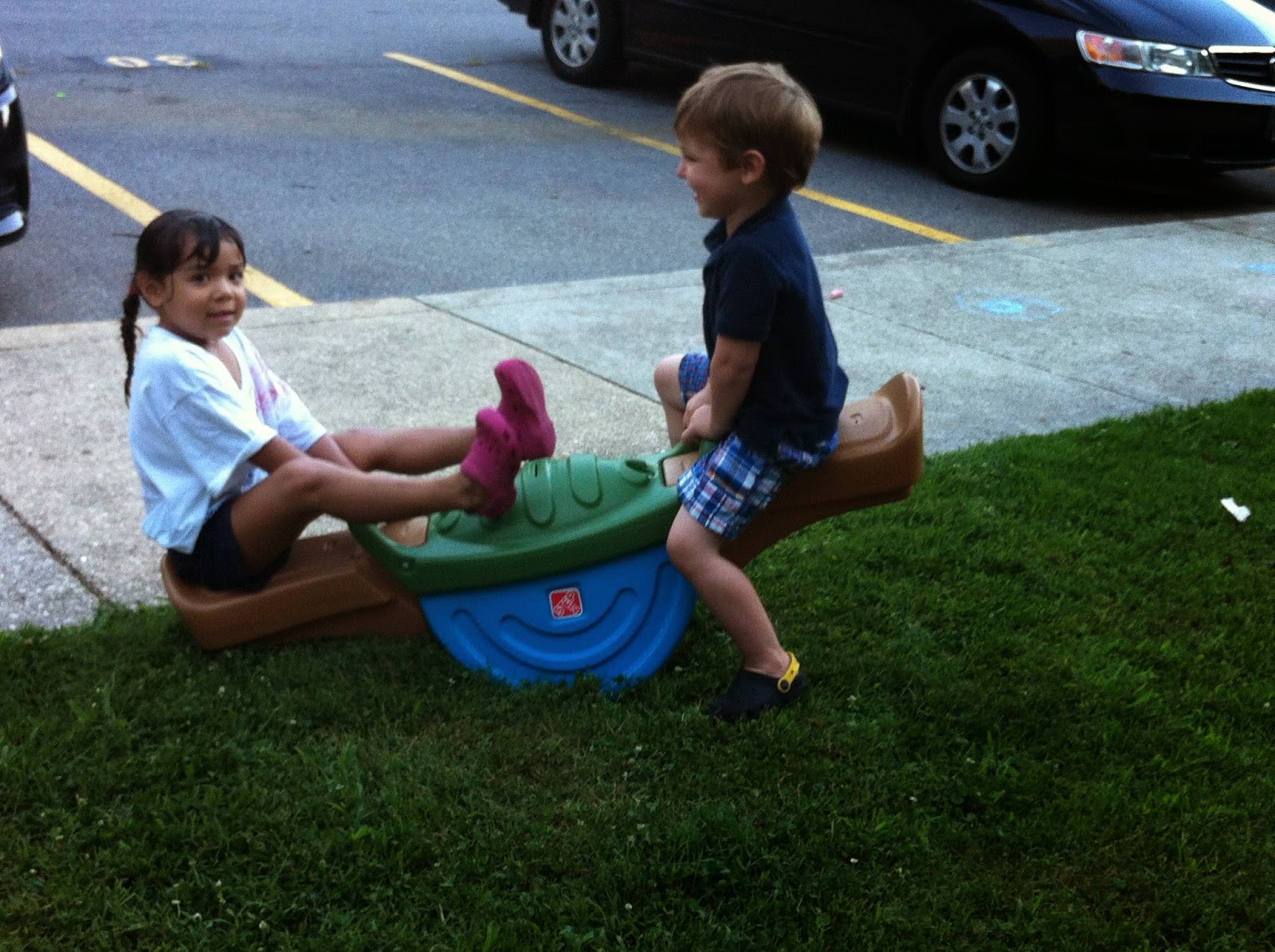 In kid news, Philip made a big change in July. Just a couple days after switching Philip into his toddler bed this winter, we had a snap of cold weather. Andy thought it would be fun to invite Philip to camp out in our room, since his room typically gets colder than ours. You can guess where this is going...Philip slept on a mattress on our floor for six months. Several times we would suggest that he start sleeping in his room again. Andy made plans to build a fort in his room one night and sleep in there with him, but he never got around to it. The night before Philip's birthday, I was putting away laundry and out of the blue Philip said, "Okay, I can sleep in my room now. Will you move my mattress back?" Of course I did, but I wasn't sure if it would last at bedtime. When bedtime came around, he went right into his room, telling Andy he was a big boy now and could sleep by himself. He hasn't been back in our room since! It was definitely unexpected and we are so happy that he made the decision on his own and didn't feel pressured into it. We never thought the transition would end up being so easy! 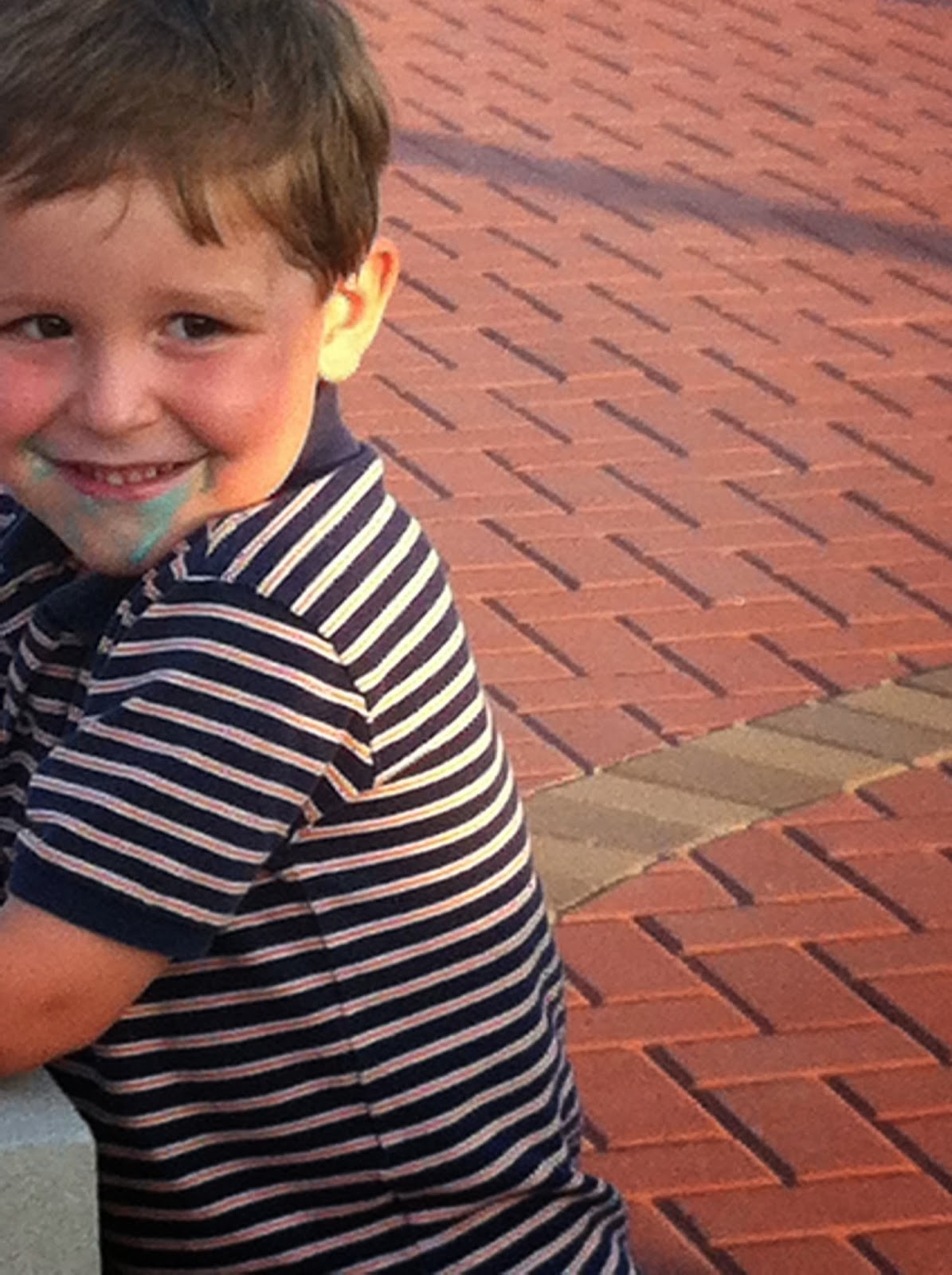 Philip had taken to calling me "Miss Kristen" at times since that is how he hears the neighborhood kids address me. When he is waiting for me to escort him somewhere (he will not go into the basement by himself), if I am taking too long for his liking he will say, "Come on you silly Mommy!" 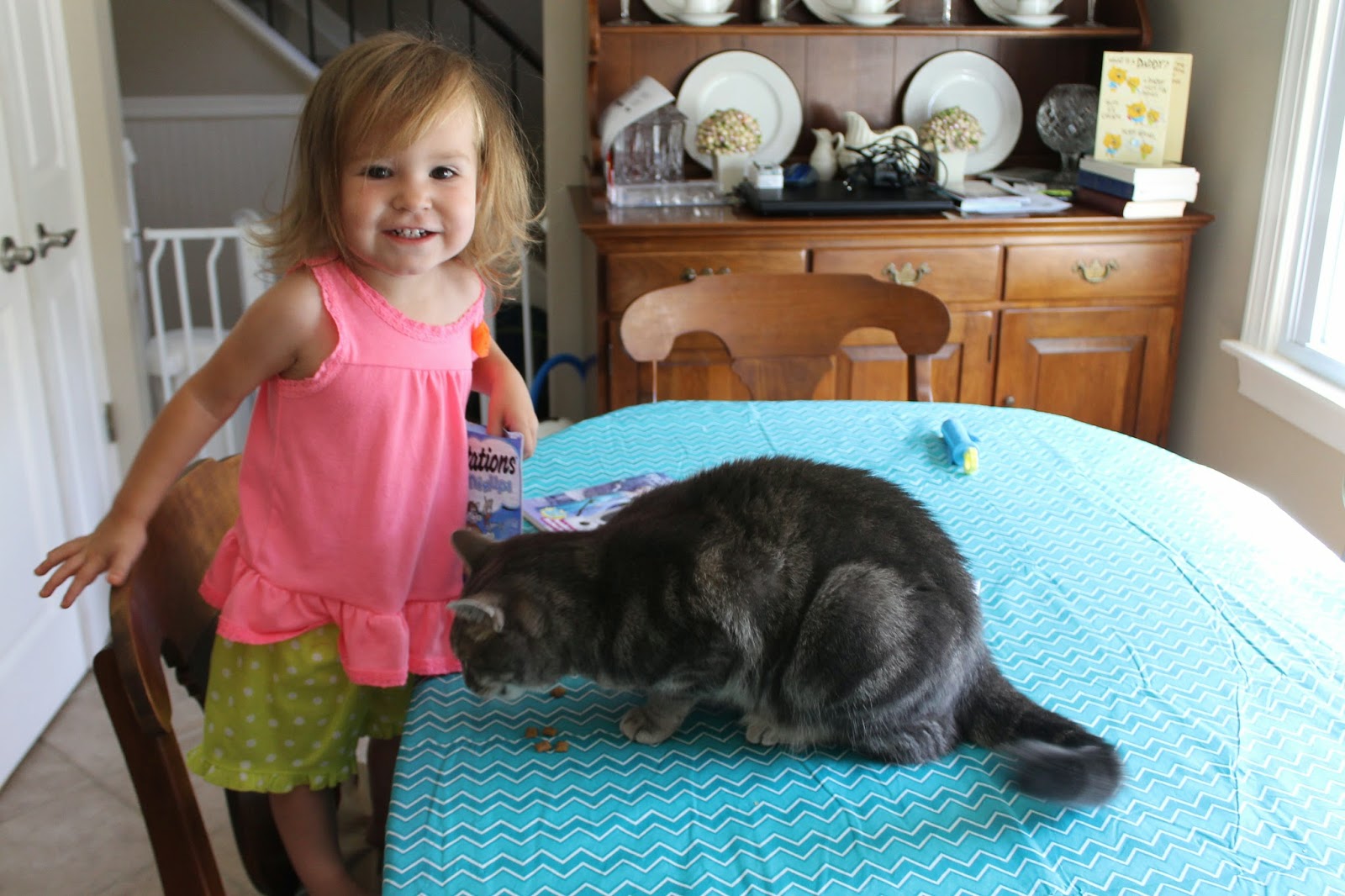 Julia loves to feed Herbie dinner and afternoon treats. She started folding hands when we pray. Each evening we ask her what she is thankful for and she normally pipes up "Jesus!" since she knows that gets a good reaction from her parents. But sometimes she branches out and says she is thankful for her family or the neighbors. It is so sweet to hear!

She is so verbal it is crazy, but she can be extremely repetitive. She will either repeat everything you say over and over; or, if she wants something, she will just repeat it until you give it to her, even if you have already responded to her. ("I want to go outside. I want to go outside. I want to go outside.") It can be enough to drive you over the edge at times and sometimes Philip boils over. It is so funny to hear him express what the rest of us are feeling. (Just like every once in a while we like it when Julia gives him a good smack when he deserves it). I always said that if Philip was a cartoon character, it would be Donald Duck and during these episodes he reminds me a lot of Donald. 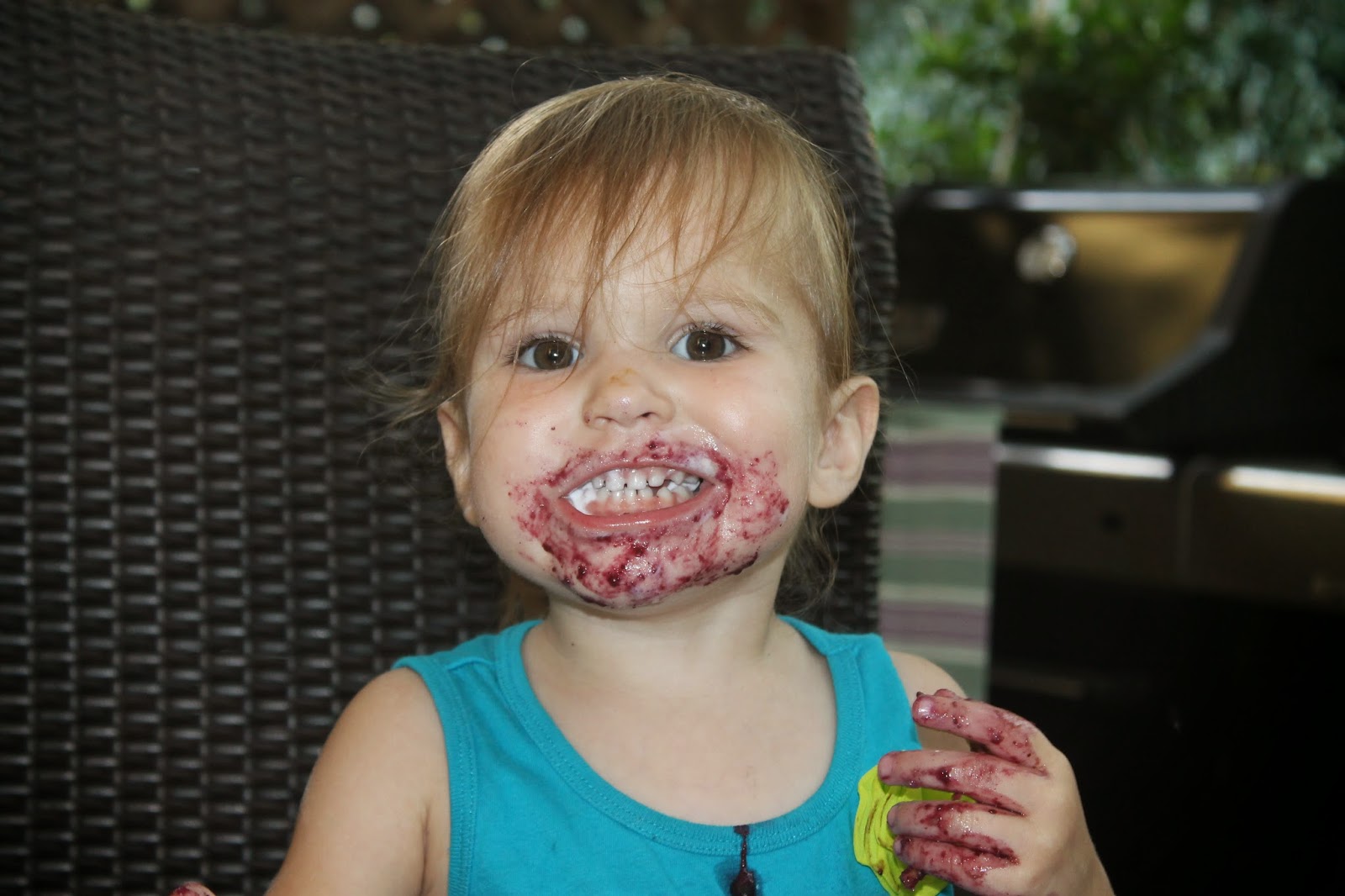 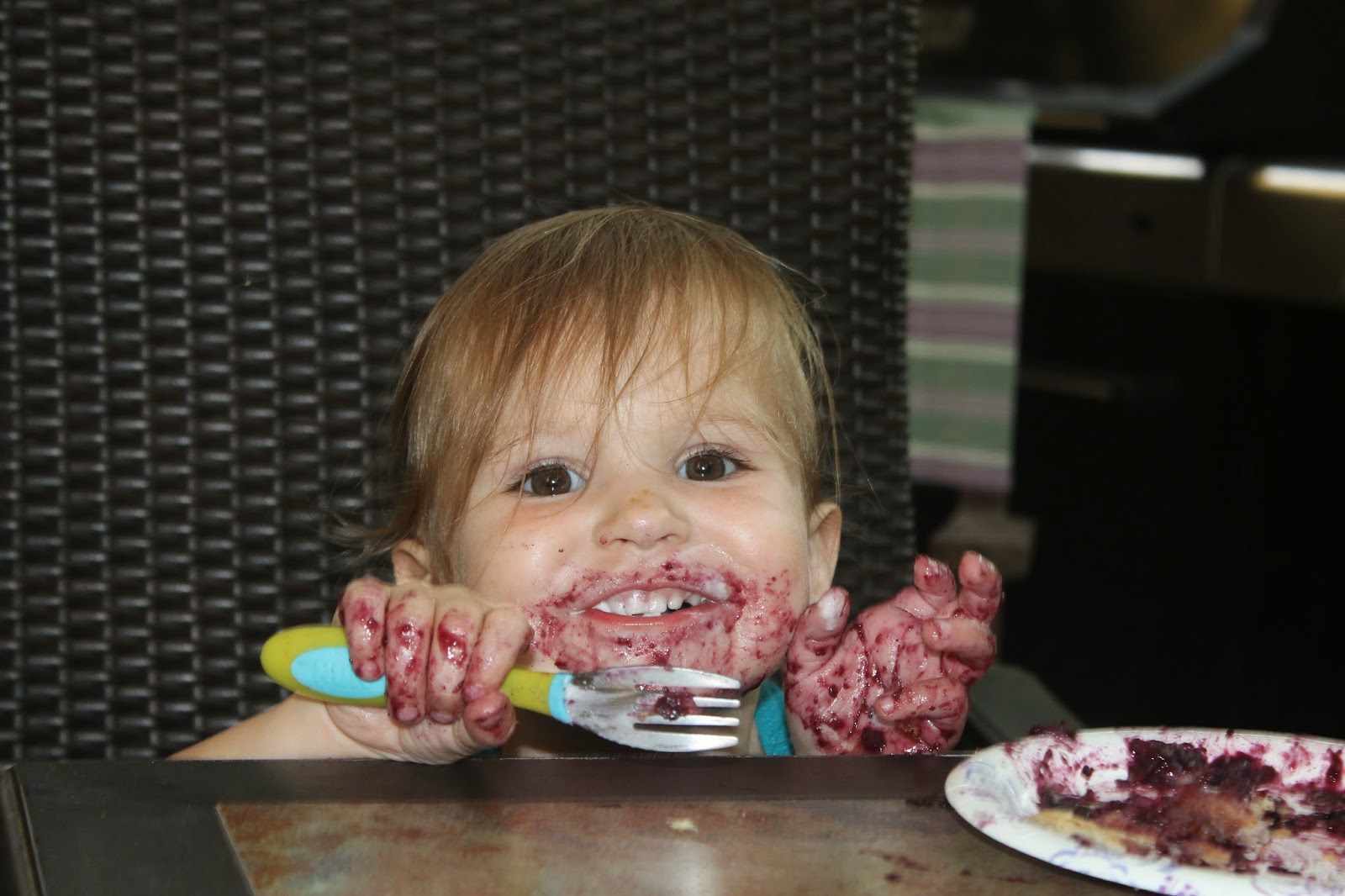 Full bellies, happy days. We are so blessed!
Posted by Joy Complete at 10:11 PM