Thank You Grandma and Grandpa!

Andy's parents came to visit last month and they helped us so much around the house.  Even though the previous owner kept the place in great shape, we still have a lot of things on our to do list.  Between Andy's dissertation, work and the baby, it is hard to fit in projects around the house.
Andy's Dad worked almost nonstop the entire trip.  Among other projects I am sure I have forgotten, he:
While he was working away, my mother-in-law was shopping and cooking for us.  She spoiled us by making a hot breakfast every morning as well as the evening dinner.  She also took me out to Borders and we picked up some new cookbooks and a little book for Philip.

During their visit, I started thinking that things are getting a lot easier now.  Then I realized that I had two extra people around the house who were helping to load and unload the dishwasher, cook and clean up, grocery shop, and watch the baby while I ran to do some quick things around the house.  One of the best things about this was that I had more time to just sit and play with Philip - sometimes I feel like I have so much to do during the day that I barely get to spend time interacting with him.

The grandparents showed amazing restraint in visiting with Philip.  They knew he had stranger anxiety, so they interacted with him, but never tried to hold him. Grandma Susan would come up and steal kisses from him several times a day, and he thought that was really fun.  As a reward, after spending a full week with us, Philip awoke happy the next morning and actually reached out to be picked up by his Grandma.  They spent several minutes together while he played with the zipper on her shirt.  It was the longest he has been (willingly) held by anyone other than Andy or I in several months. It made my day and of course it made Grandma's too! 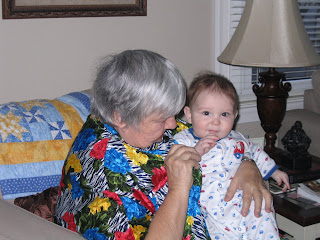 A momentous occasion
My in-laws left behind a special housewarming gift that we have been enjoying using - a grill!  We are looking forward to using it a lot this spring and summer. 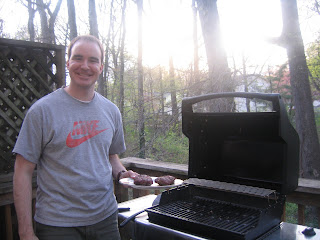 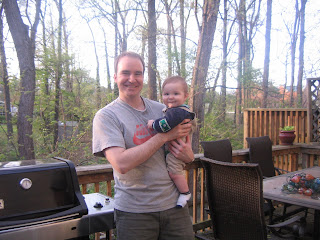 Babies and grills mix??? We are all about safety around here!
Posted by Joy Complete at 4:09 PM