JPII, We Love You!

John Paul II is being beatified today, Diving Mercy Sunday!  For an easy to understand briefing on beatification and canonization, visit Little Catholic Bubble.  And for more information about Pope John Paul II and the beatification, visit http://www.usccb.org/popejohnpaulii/.

Earlier in the week, Andy and I were invited to attend the National Catholic Prayer Breakfast (did you even know there was such a thing?  I didn't!).  The theme was "Celebrating the Beatification of John Paul the Great." This quote from John Paul II was part of Bishop Lori's speech, and it reminded me of what we see going on in the world around us, especially in recent months.

“Ladies and gentlemen: On the threshold of a new millennium, we are witnessing an extraordinary global acceleration of that quest for freedom which is one of the great dynamics of human history. This phenomenon is not limited to any one part of the world; nor is it the expression of any single culture. Men and women throughout the world, even when threatened by violence, have taken the risk of freedom, asking to be given a place in social, political, and economic life which is commensurate with their dignity as free human beings. This universal longing for freedom is truly one of the distinguishing marks of our time.” (Address to the United Nations, 1995).

It was a blessing to attend the prayer breakfast and to take the time to reflect more fully on this man now called Blessed. What a great day this is for the church and world!  I remember being moved when watching the funeral of Pope John Paul II and hearing the cries of the faithful for "Santo Subito!"  (Sainthood immediately!) 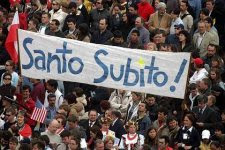 I also remember the moment that the casket was raised for the crowd to see and the long-standing applause for this man that was so obviously a saint. 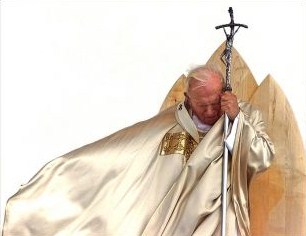