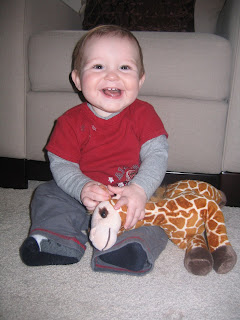 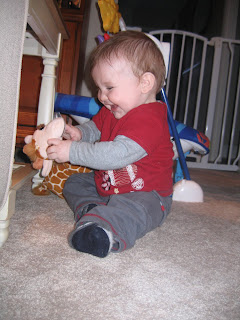 Wow, what a month he had!

First, he started to crawl. Next he got his front two teeth, followed by another tooth on the top.  Then when I went to get him in the middle of the night one evening, I found him pulling himself up to a seated position, so now he can sit up on his own anytime he wants!  Of course, I already posted he can now pull up to a stand as well.  This guy was nonstop! 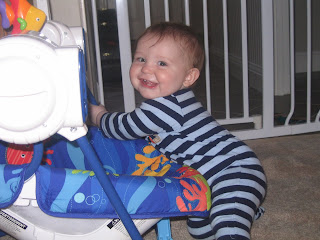 He started eating more solids, but stuck mainly with snack foods.  He loves Puffs, Mum Mums, and Yogurt Melts.  We gave up on the purees completely and are trying to get him to like "real food" instead of just snacks. 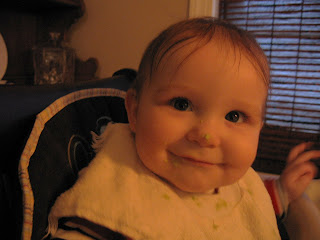 Trying some avocado
I am almost afraid to write this down, for fear of jinxing it (insert Andy eyeroll here).  Philip started to become a very good napper the last couple weeks of this month.  It has taken A LOT of work, but it was all worth it!  I still have to help him fall asleep, but once he is down, he is taking a couple good naps a day without needing my intervention. 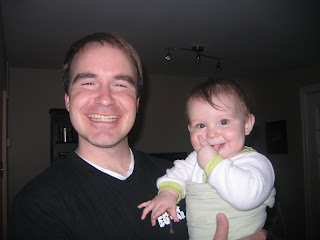 All wrapped up and ready for bed

At his appointment, Philip was weighing in at just under 20 lbs (19 lbs, 15 oz. - the absolute closest he could get to 20 lbs).  His percentiles were much the same as his 6 month appointment - 45% for weight, 25% for height, and a whopping 75% for head circumferance.  He is going to be a smarty pants like his dad!  As far as developmental milestones, the doctor said he was already achieving 10-11 month old skills - I knew he was growing up too fast! 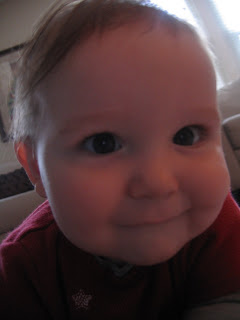 I just read that babies normally get their chubbiest around 9 months old and then they start burning it off as they get more active.  He has some great thighs and a round belly right now, and I am trying to enjoy them before they melt off!  This little man is into everything right now! 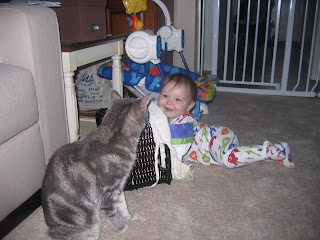 This was a big month for cute pictures with Dad.  Here are some favorites: 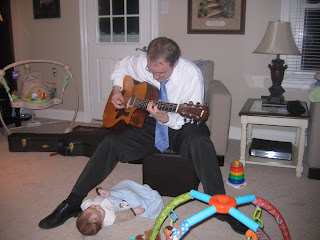 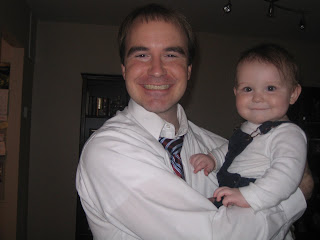 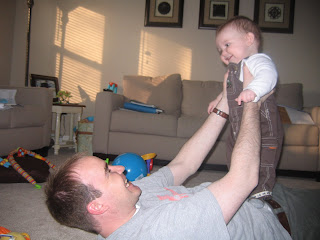 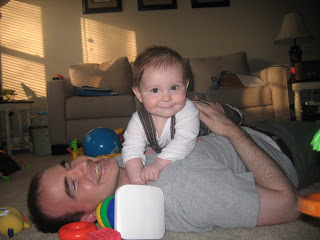 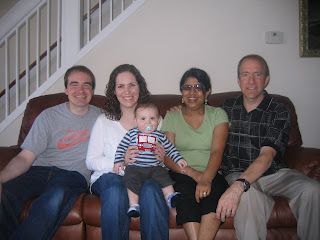 A visit to our brother and sister-in-law's house.
He was a little grouchy, hence the pacifier.
Posted by Joy Complete at 11:16 PM