August is always a busy and fun month in our family. 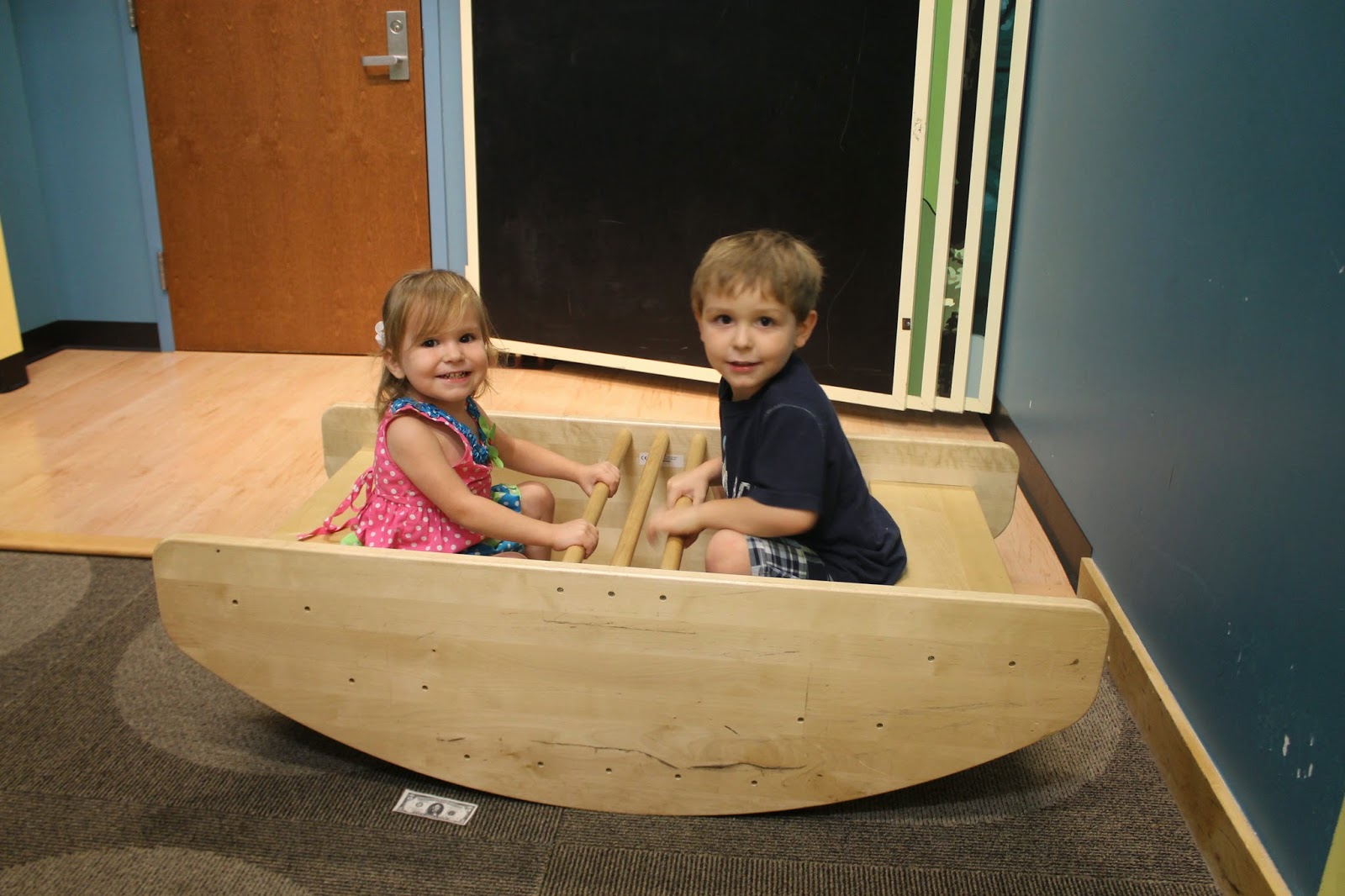 Andy and I celebrated our 12th wedding anniversary. We went up to the Baltimore Inner Harbor and had dinner at a Tapas restaurant. Then we walked to an Italian bakery to pick up some sweets to bring home. It turned out to be Restaurant Week in Baltimore, so we lucked out with good prices. There was also some sort of Anime convention going on in town, so there was lots of interesting people watching - all kinds of outfits and characters were out in full force! 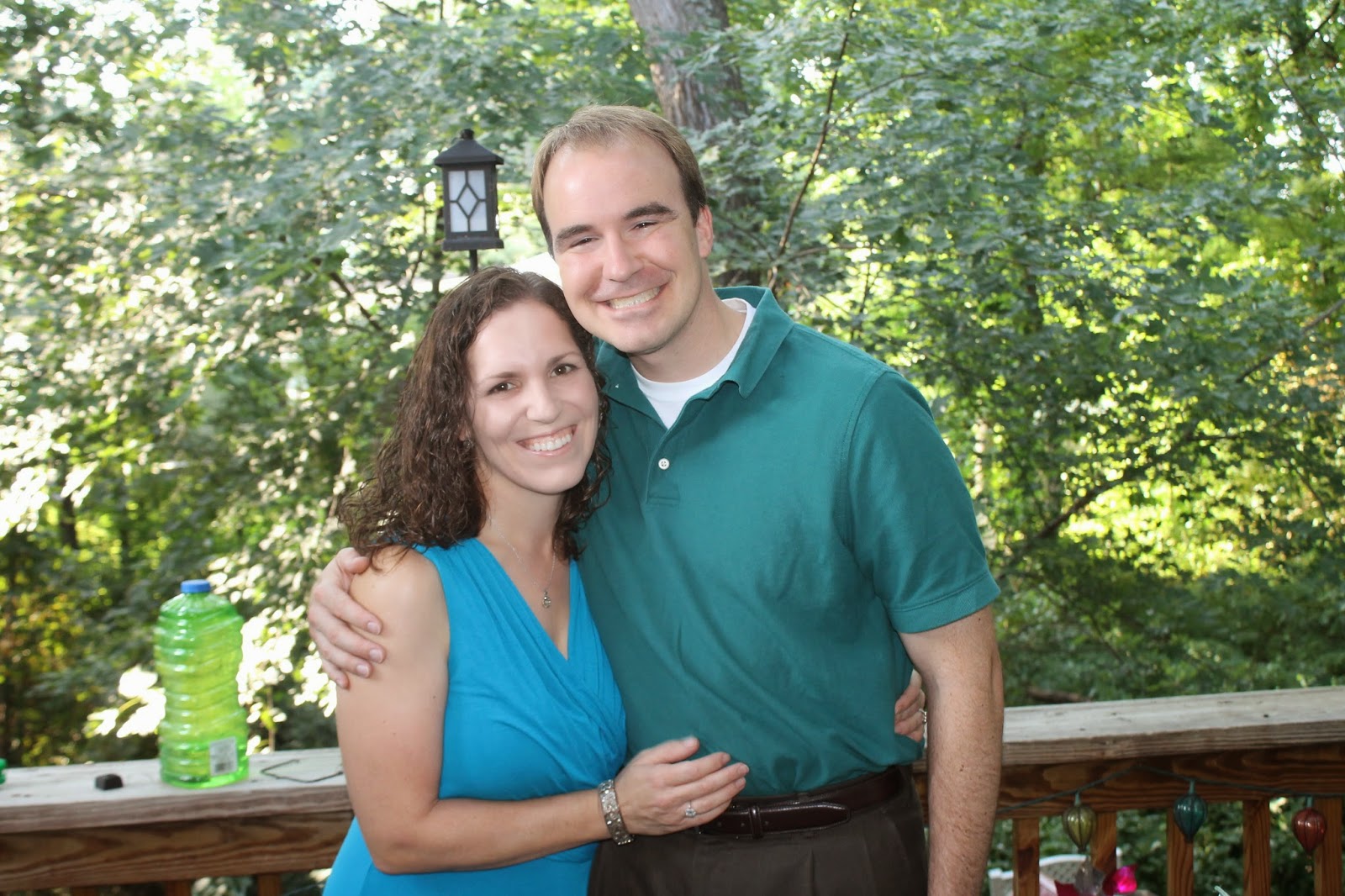 A few days later we celebrated Julia's birthday and the arrival of Andy's brother and family. One day we took the kids out to a local park that has it all - a farm, carousel, train, nature center, miniature golf, and a playground. It was a big hit and all the kids had some nice rest time afterwards! We also went to the Basilica for Mass and had dinner out one evening. 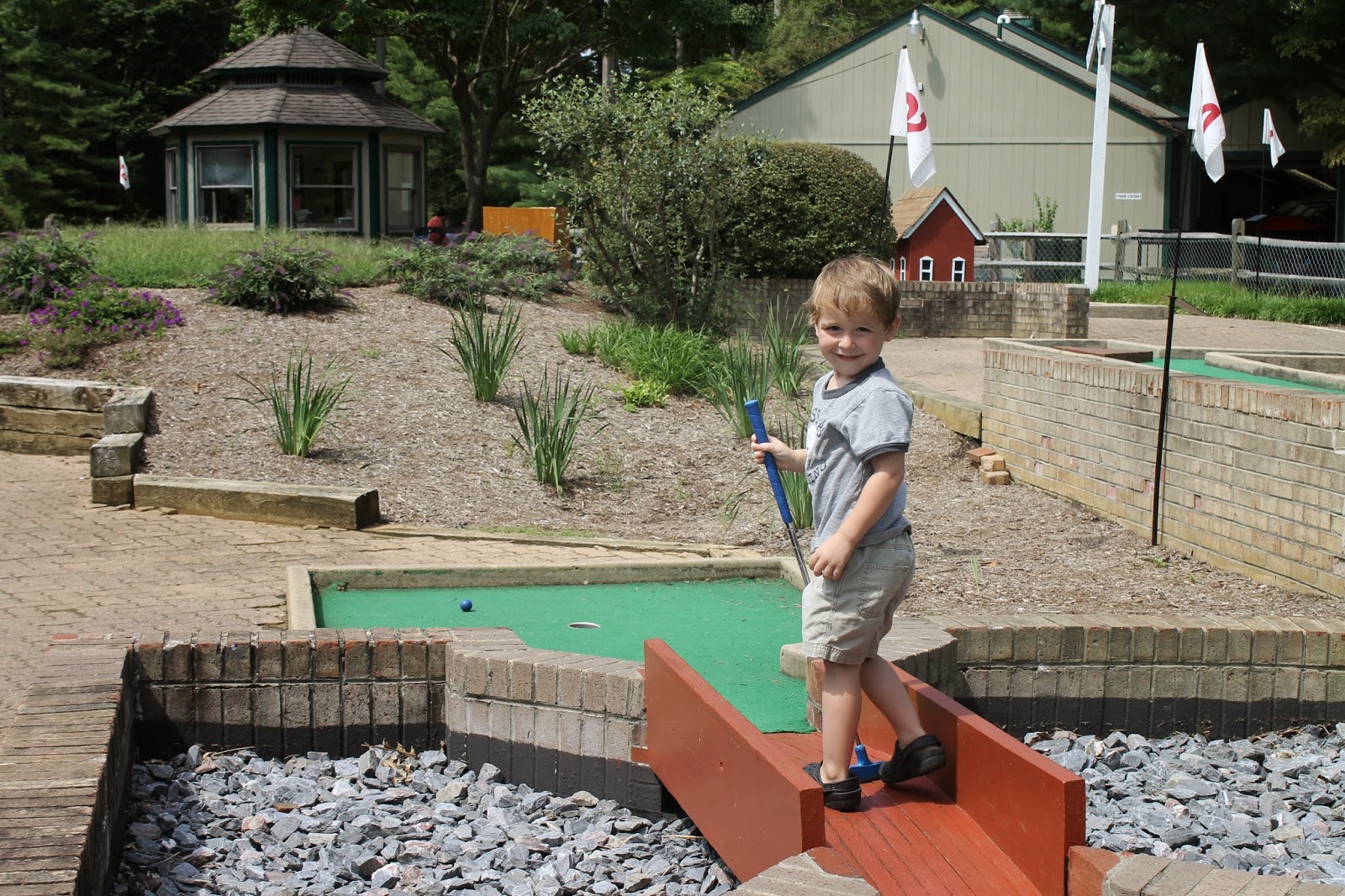 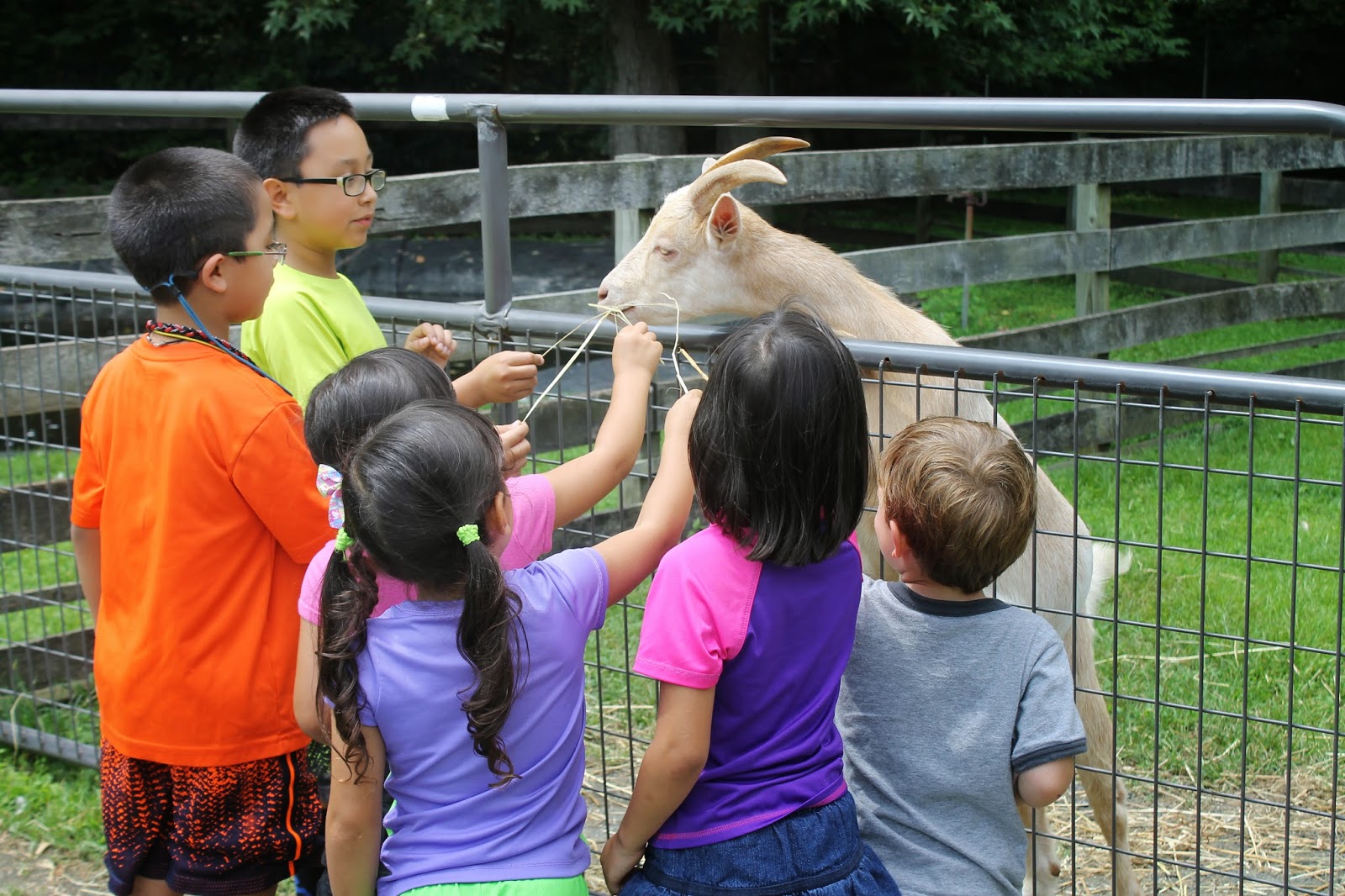 That weekend was my birthday. Andy and his brother volunteered to watch the kids for us while my sister-in-law and I did a little shopping and went out to lunch. We happened to have some free tickets to a local baseball game that night, so we all went out for a fun-filled evening. 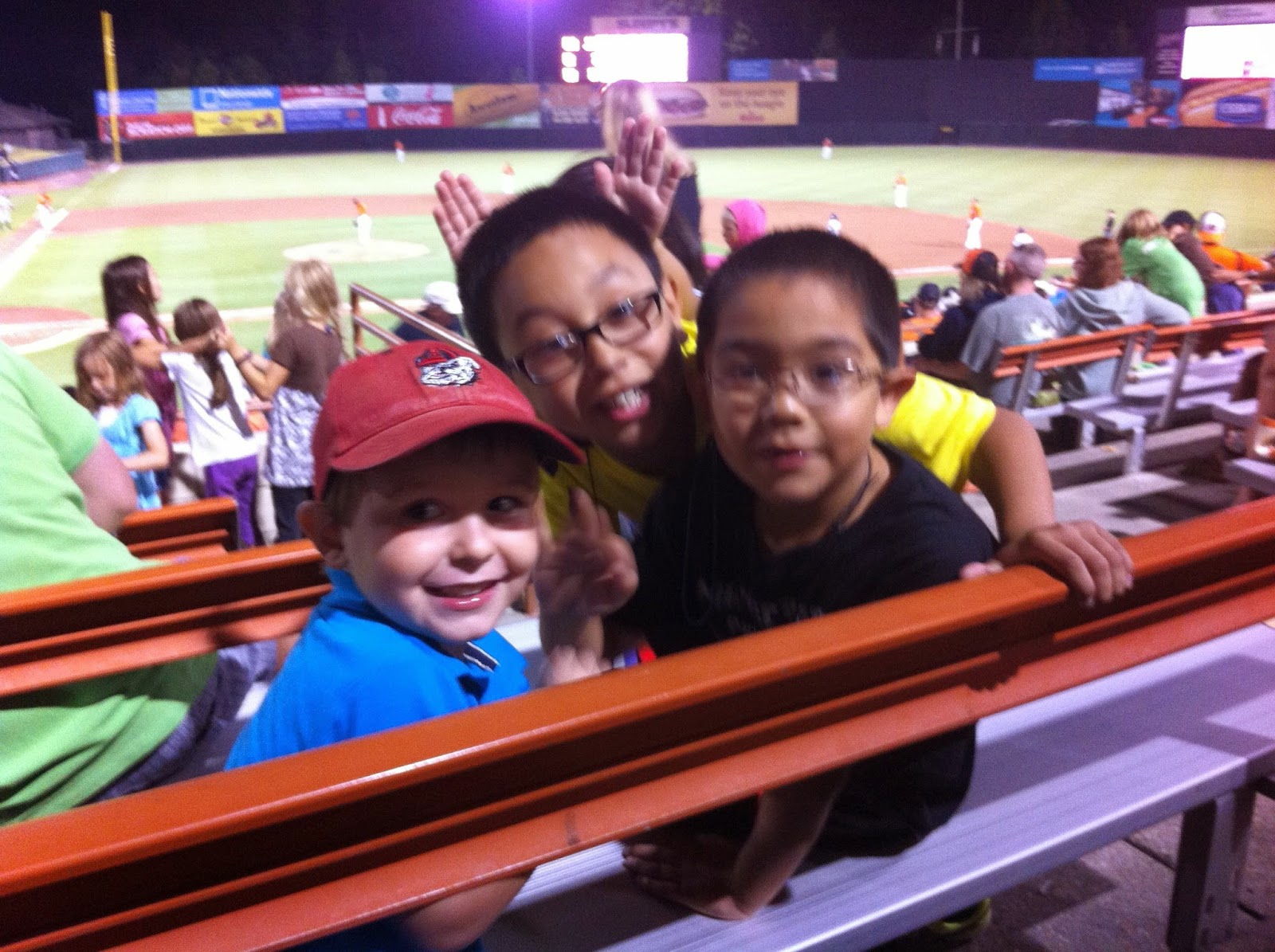 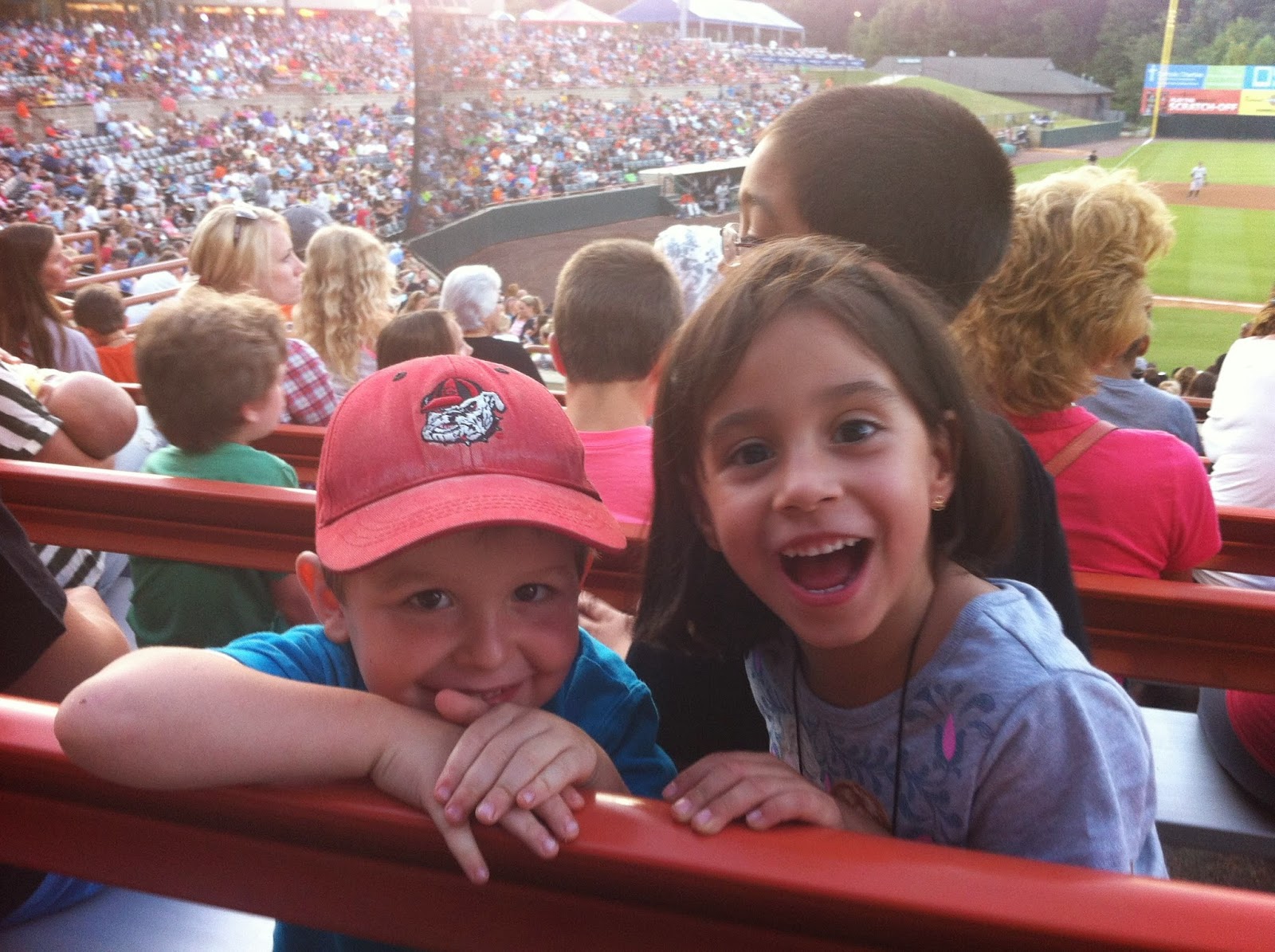 The next day, my neighbor brought me a birthday cake (knowing that husbands tend to forget that sort of thing). Then we went over to visit her husband where he works at National Geographic. We got to tour around behind the scenes and walked through exhibit area. Then we grabbed some dinner and brought it to a park near the White House. 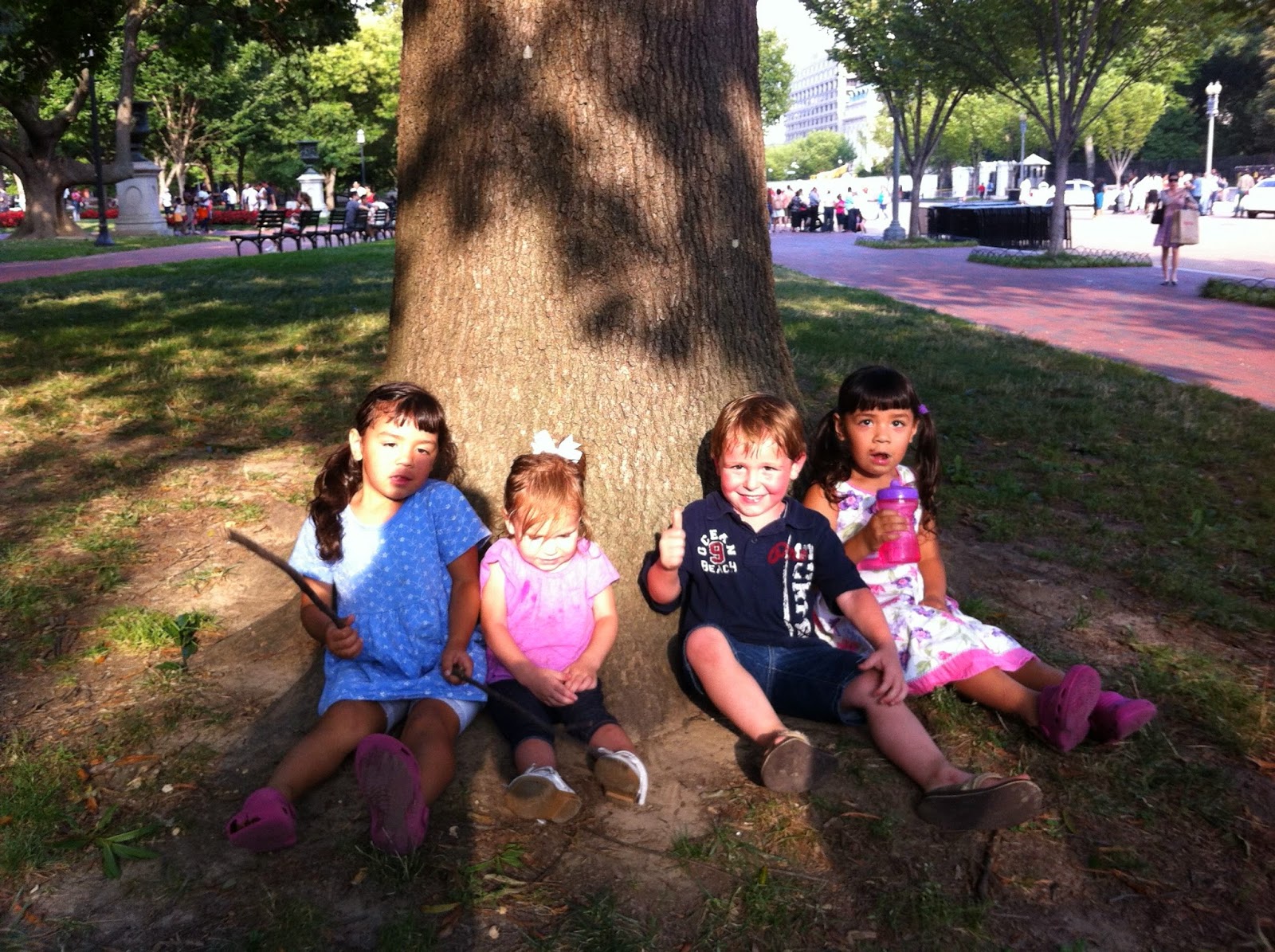 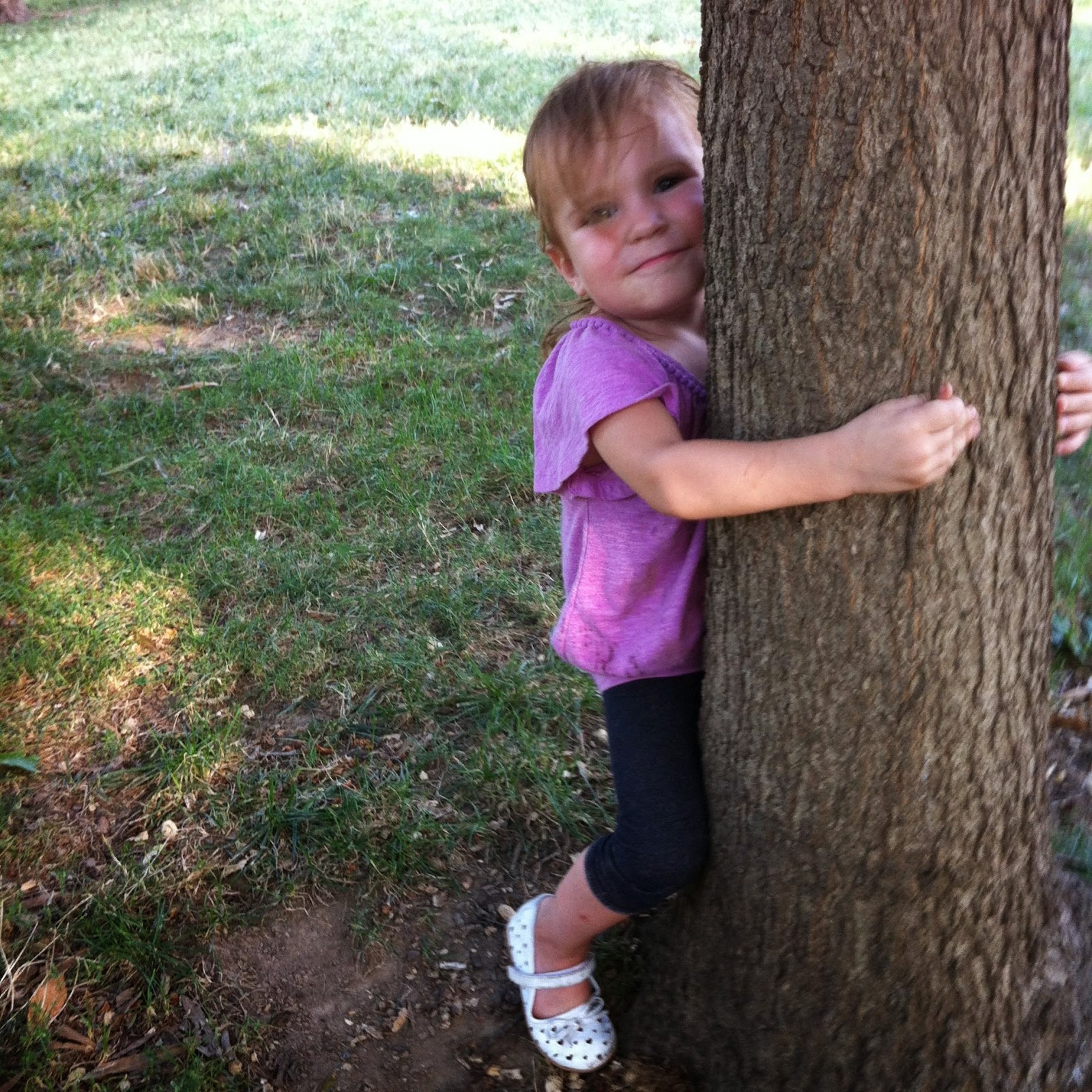 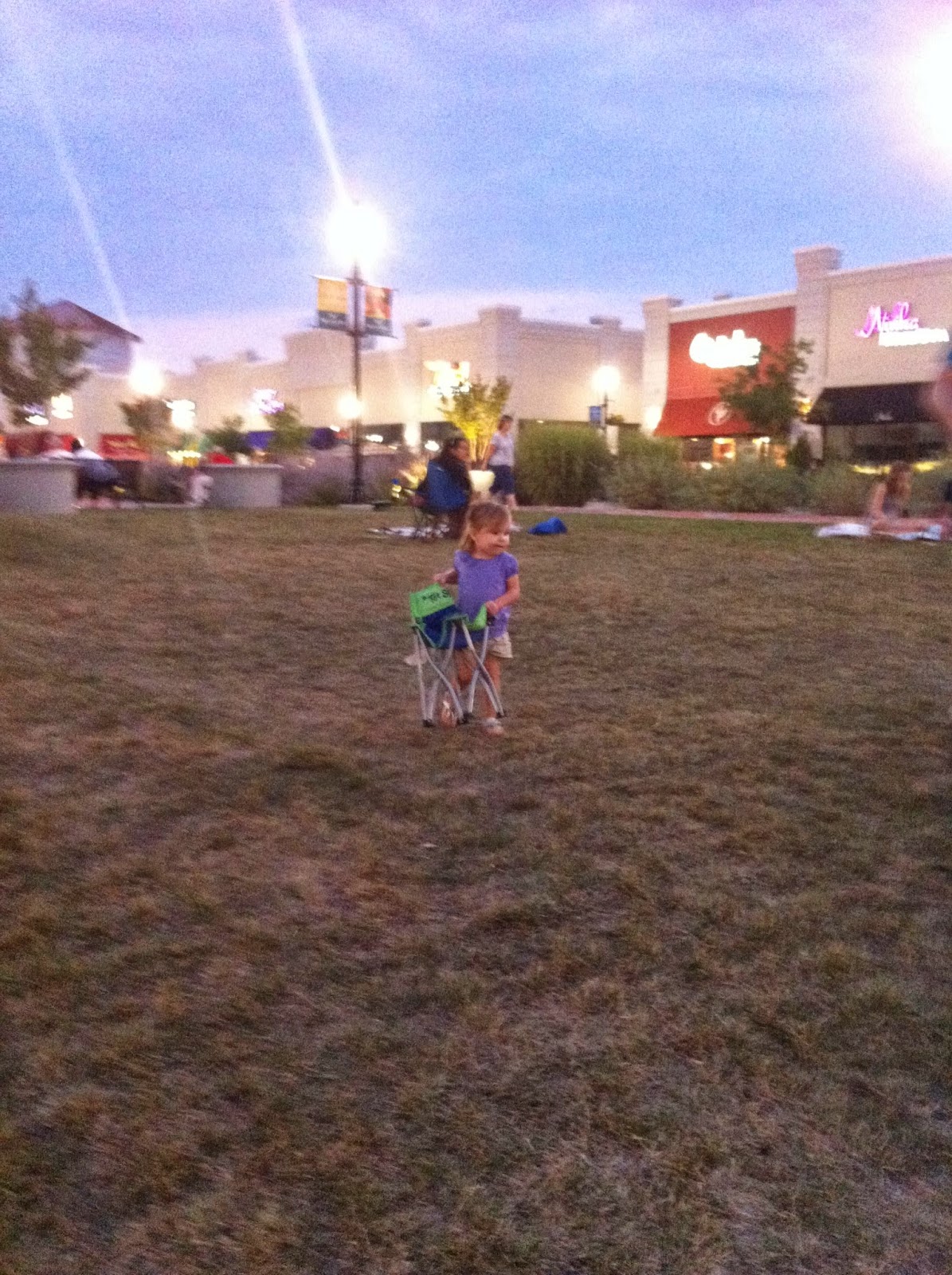 "This is real heavy, me," said Julia after carrying this chair across a field.
lunches out with friends 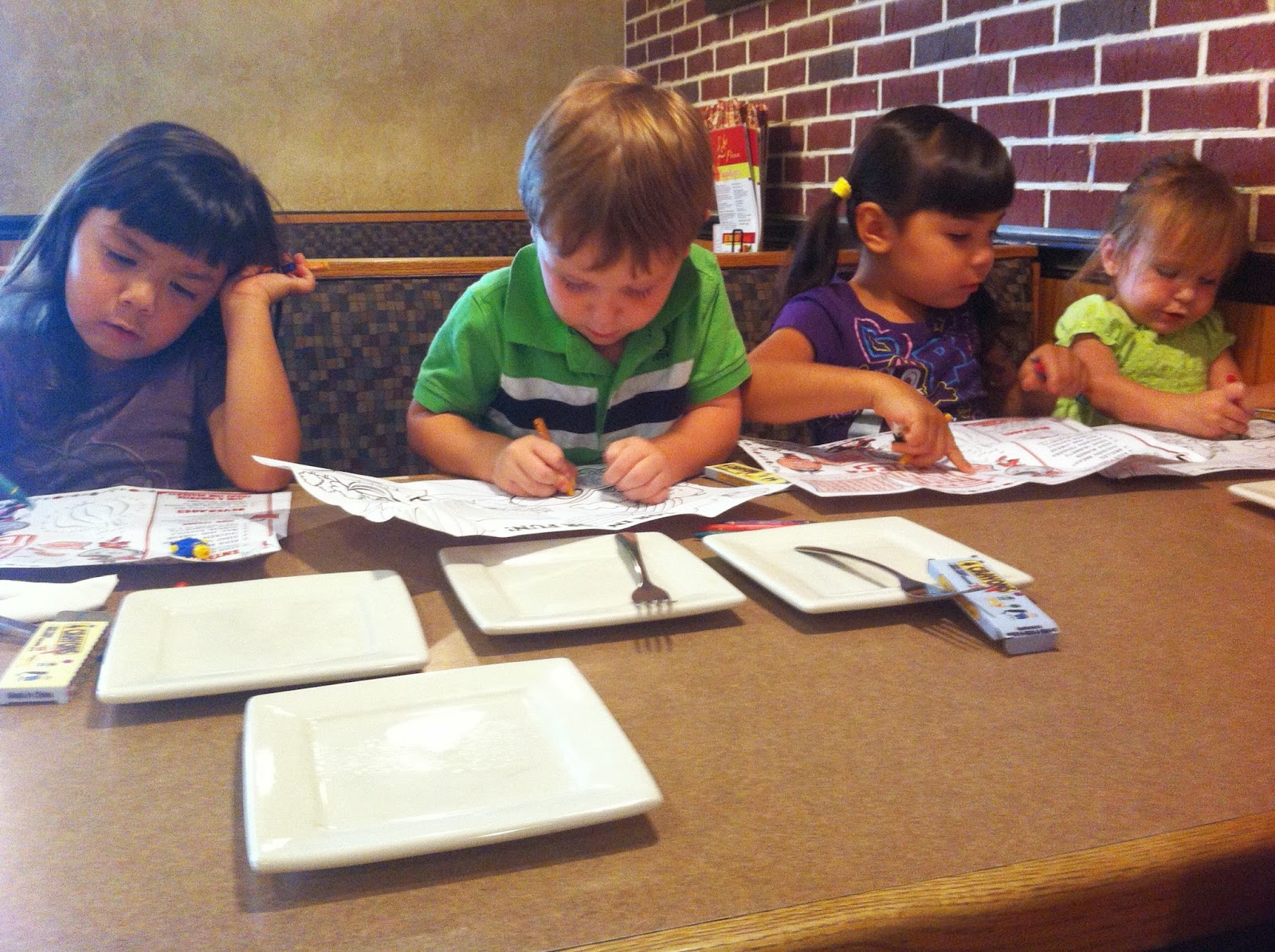 Don't they all look like they're doing homework?
park visits 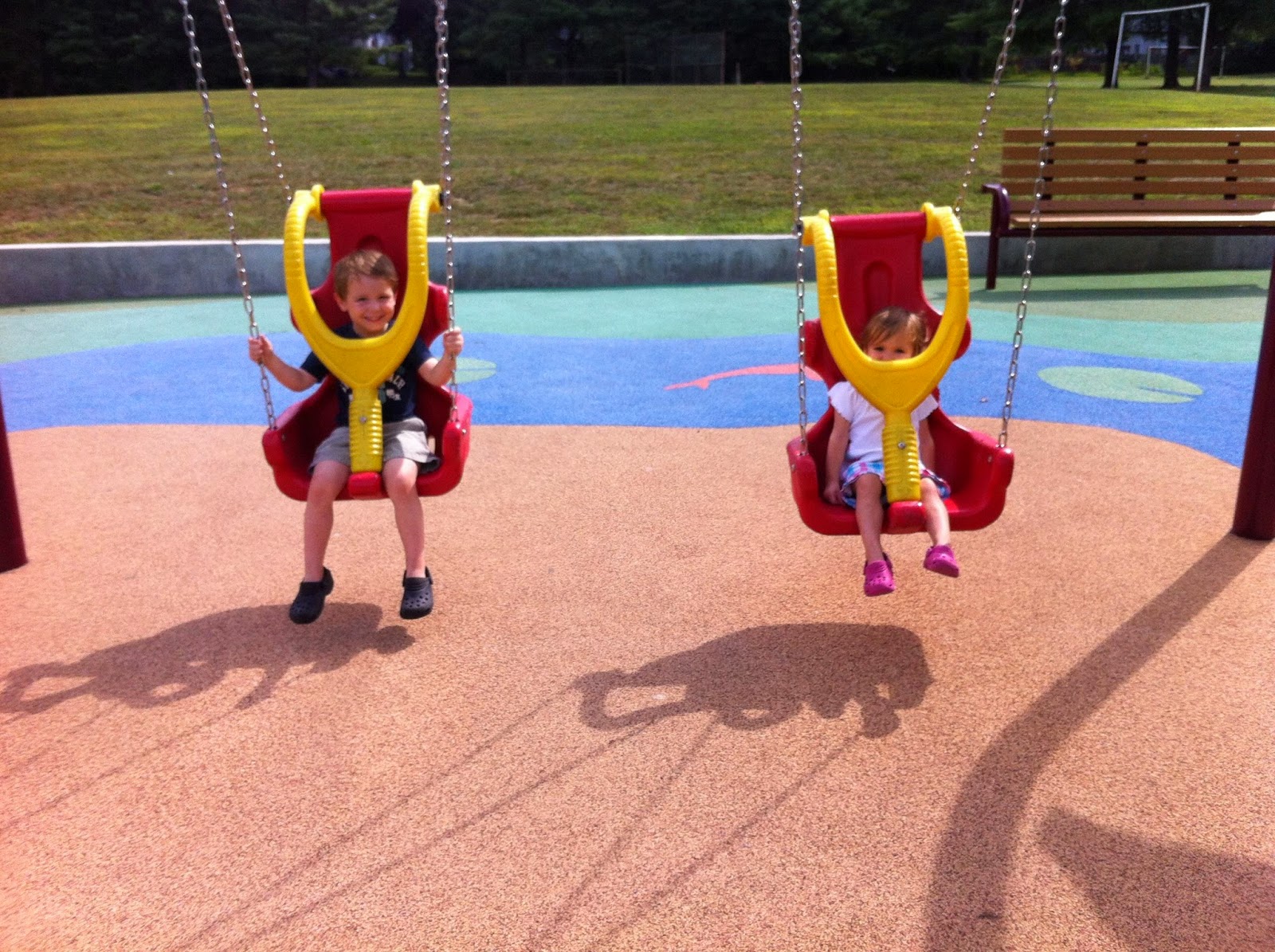 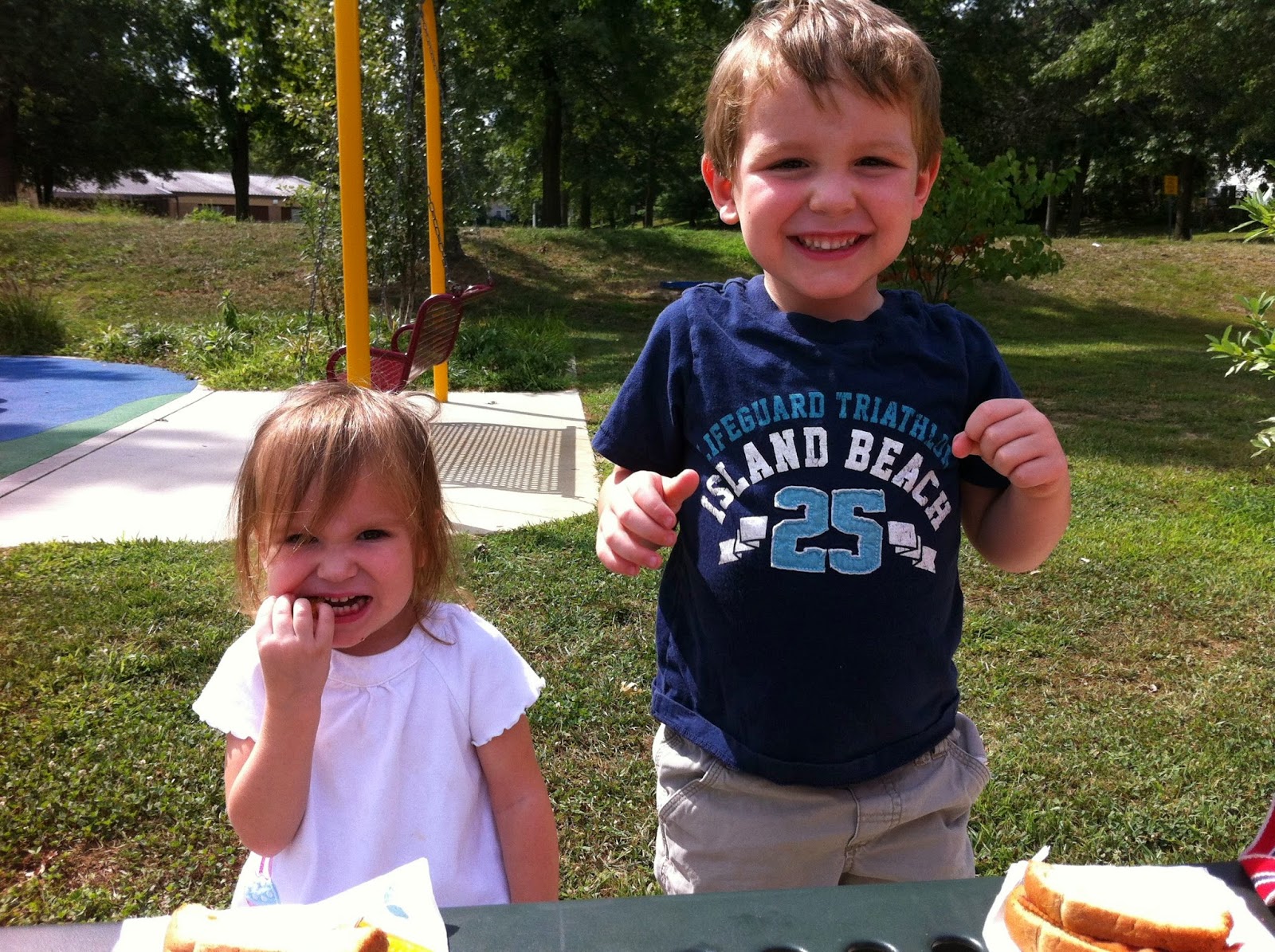 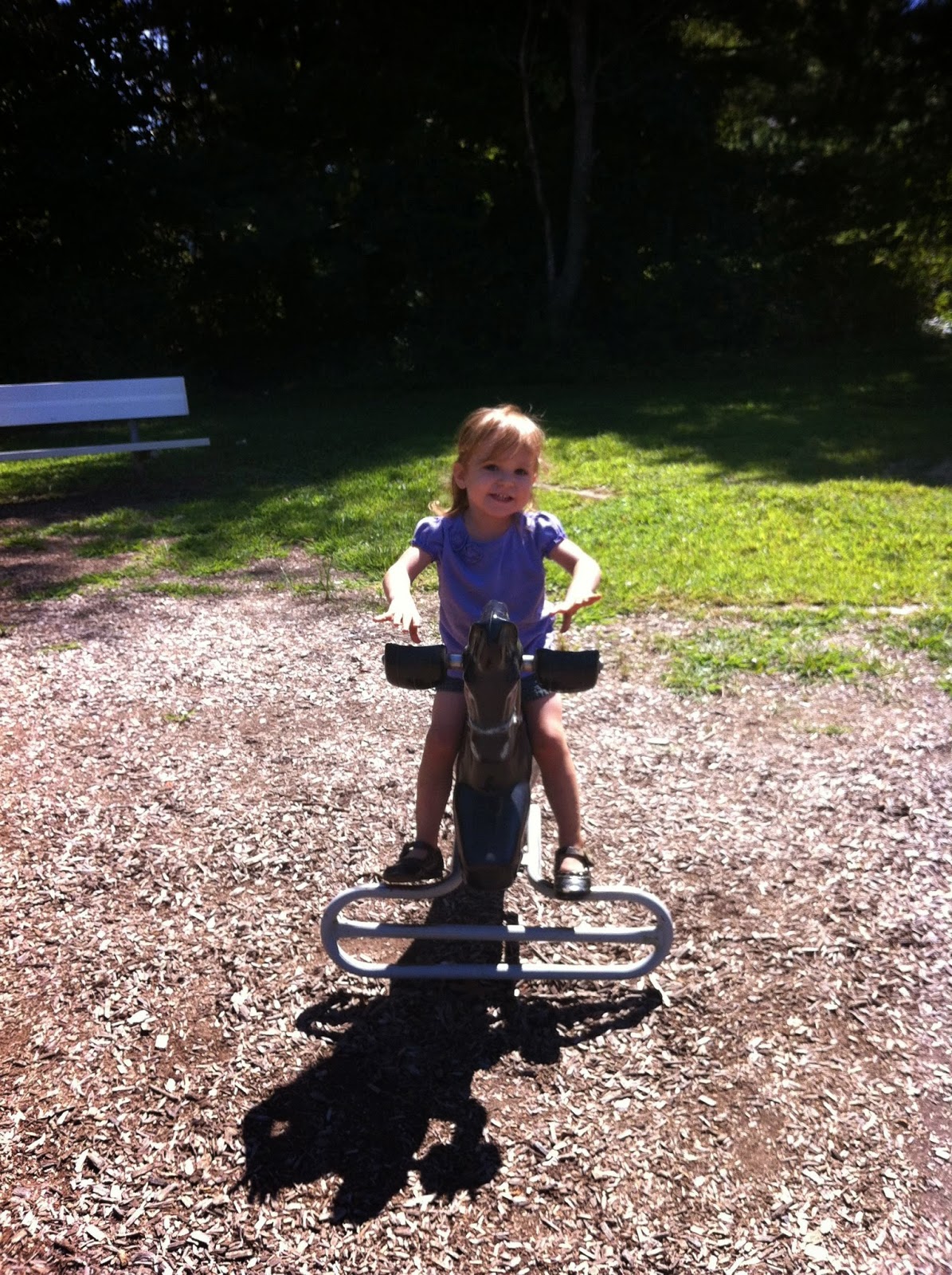 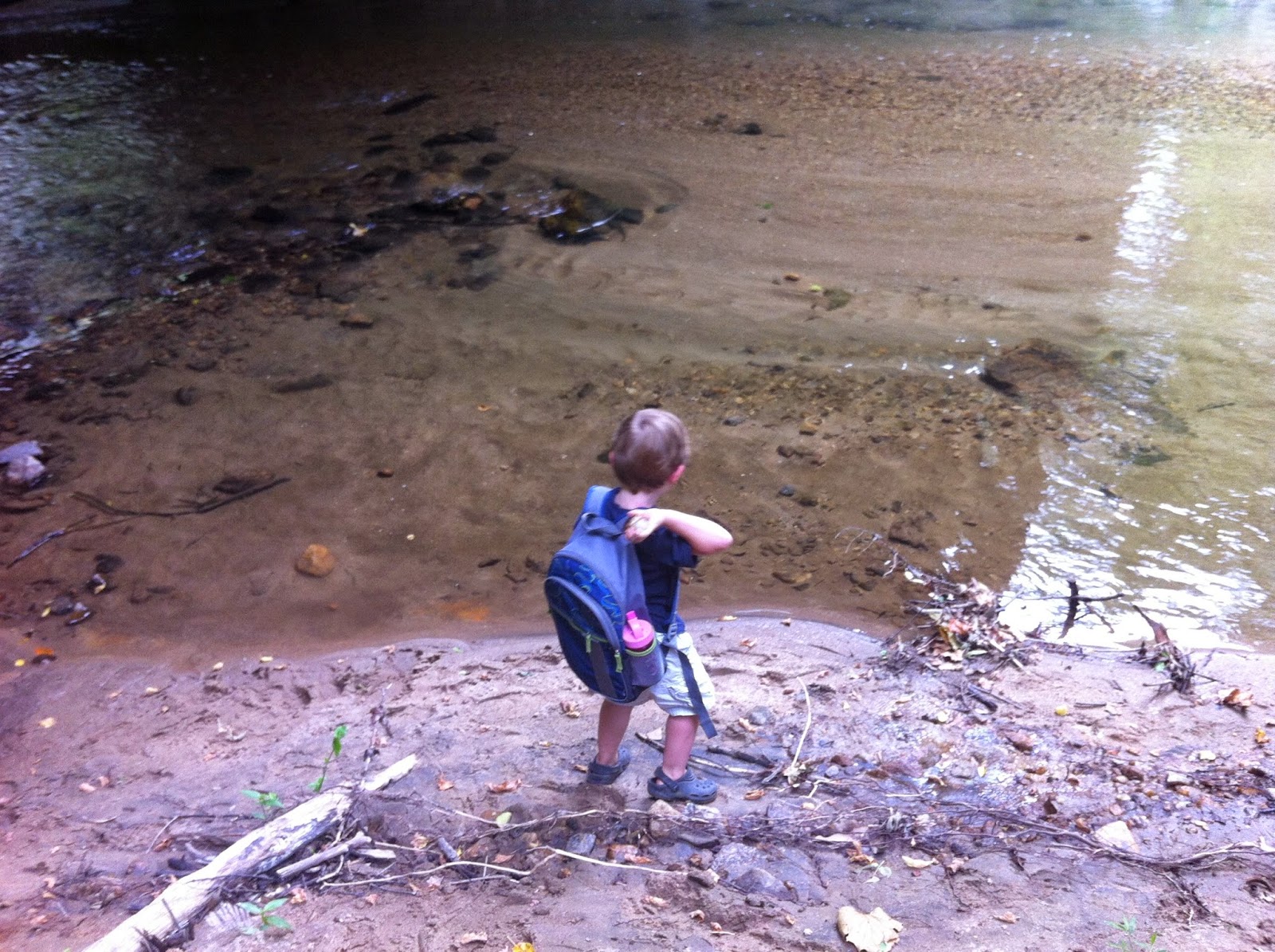 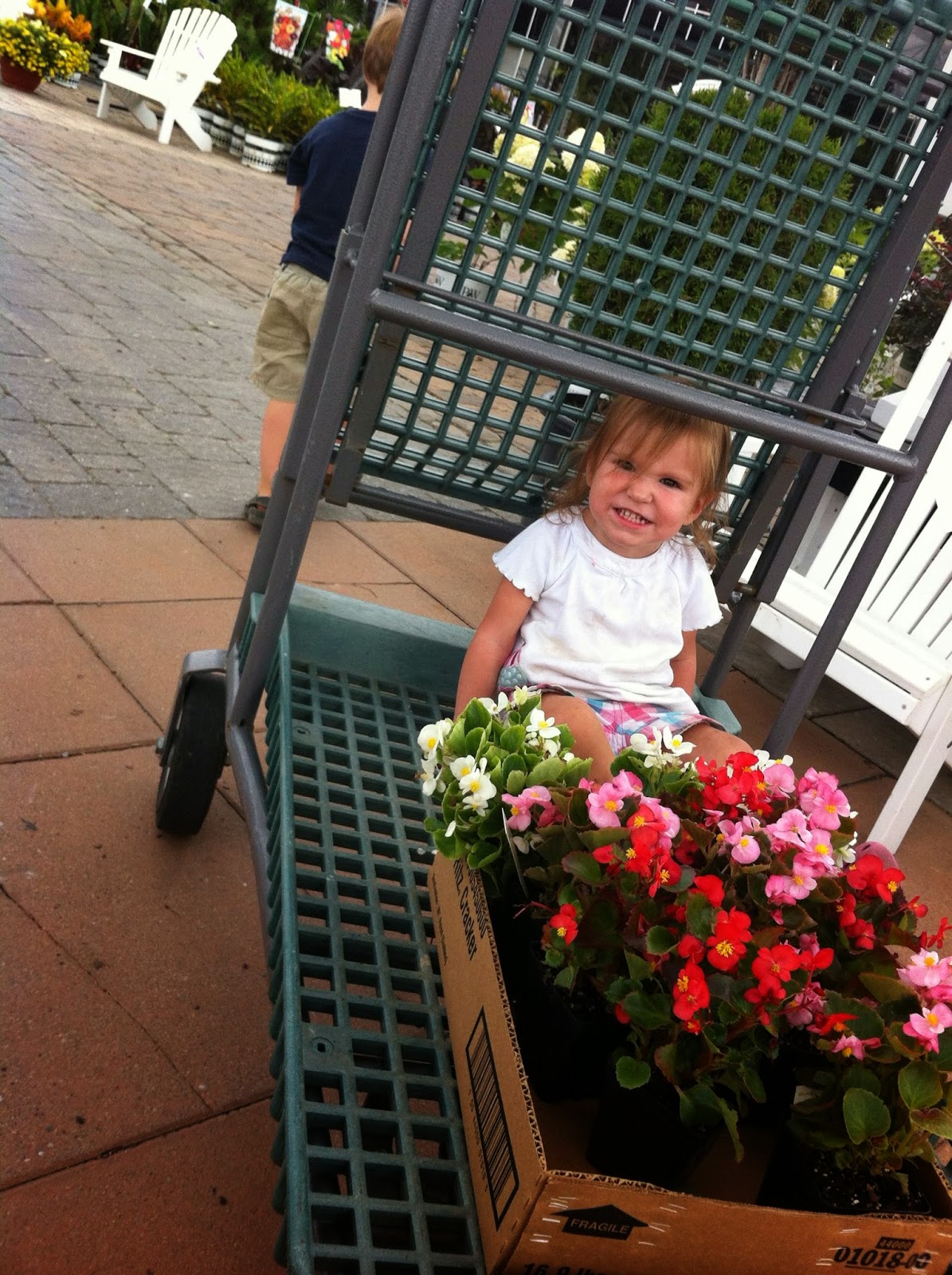 Philip had his first dentist visit in August. Seeing him clamp his mouth shut in fear at the doctor's office on several occasions, I didn't think he was ready for the dentist when he was younger. Philip has grown a lot in the past year and I thought he was ready now. He did great! He opened his mouth every time he was asked, and was a cooperative, but cautious patient. He came out with a fun goody bag of loot! 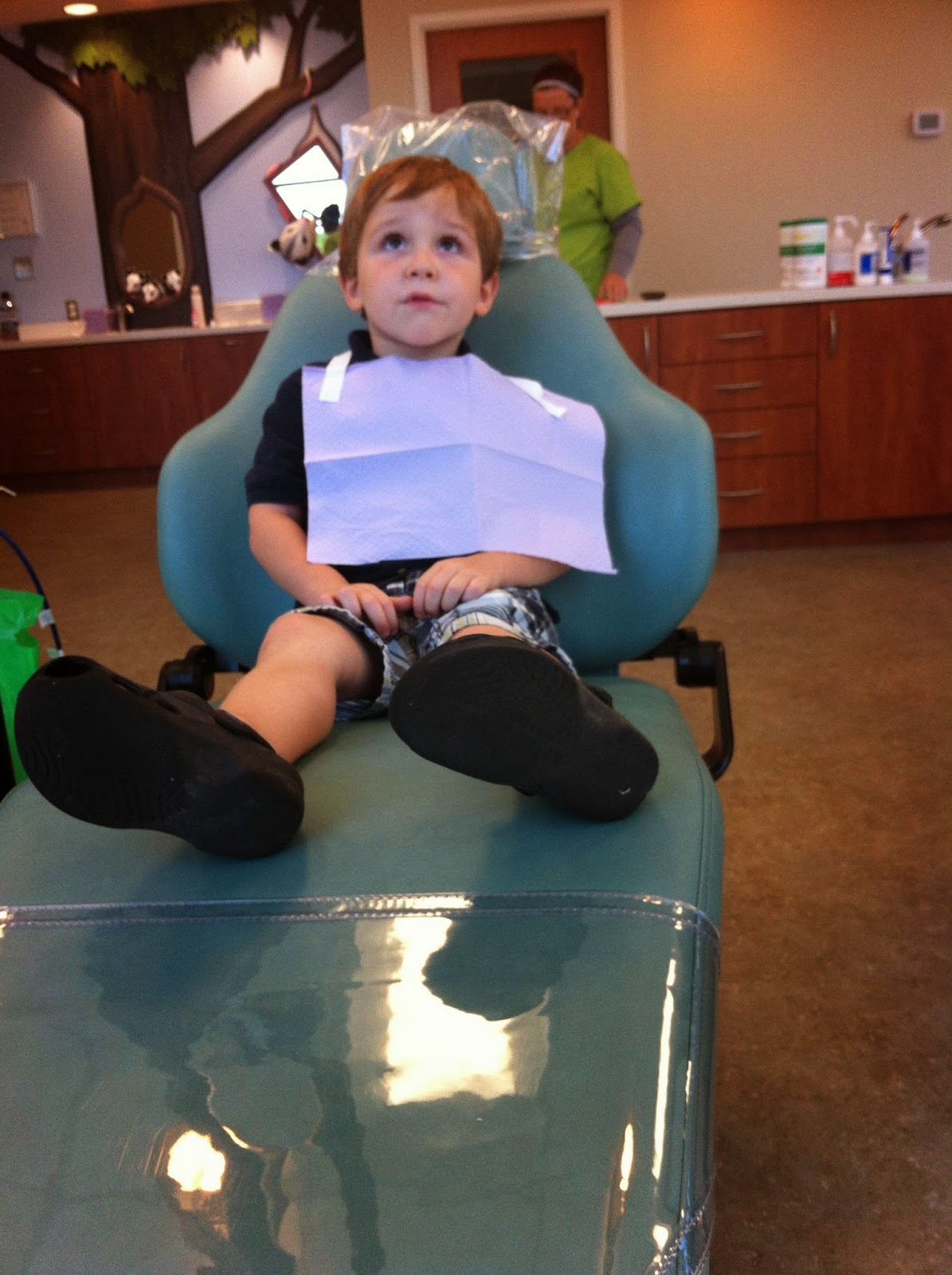 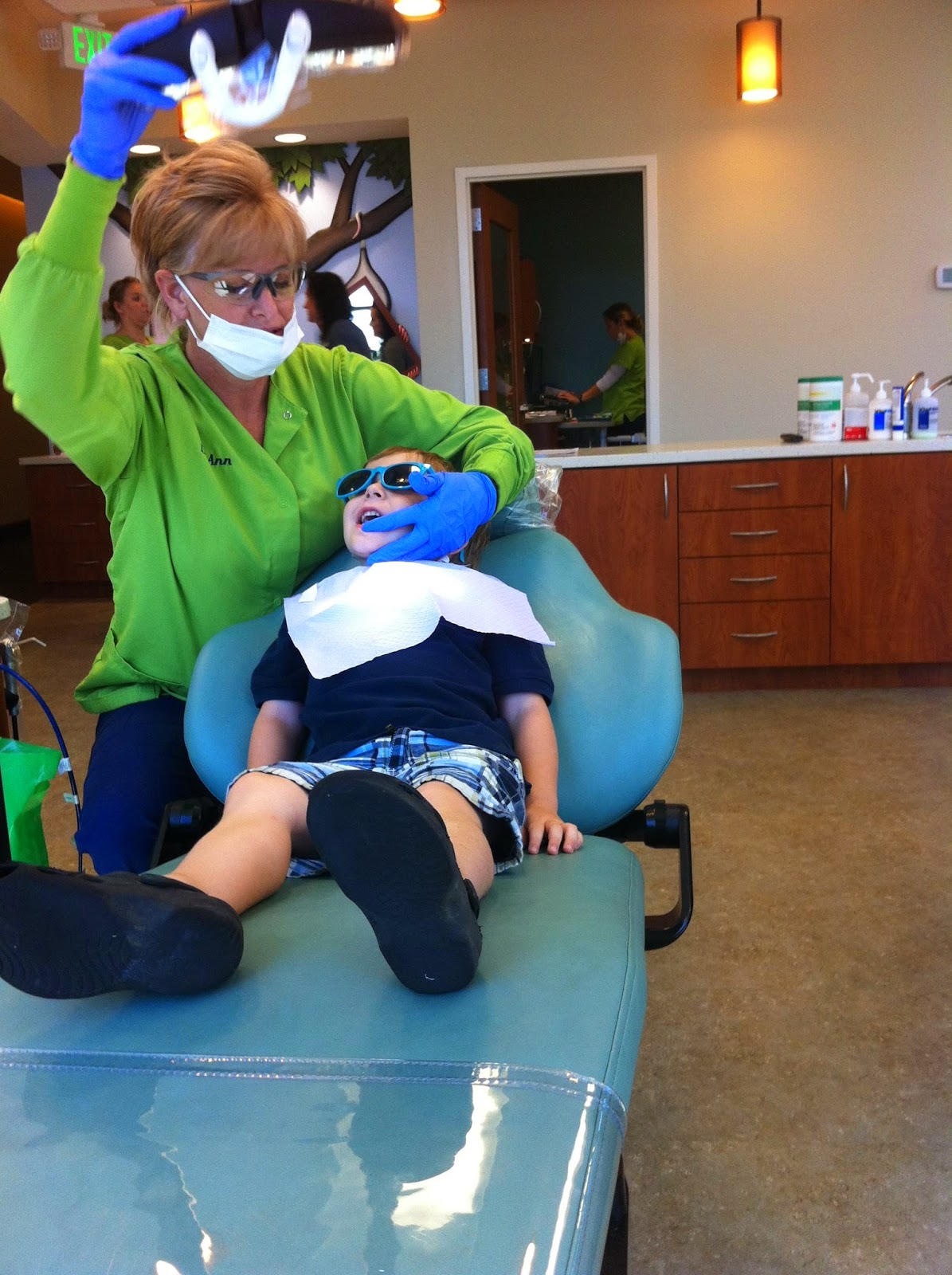 He didn't like the light in his eyes, but luckily they had a drawer full of shades. 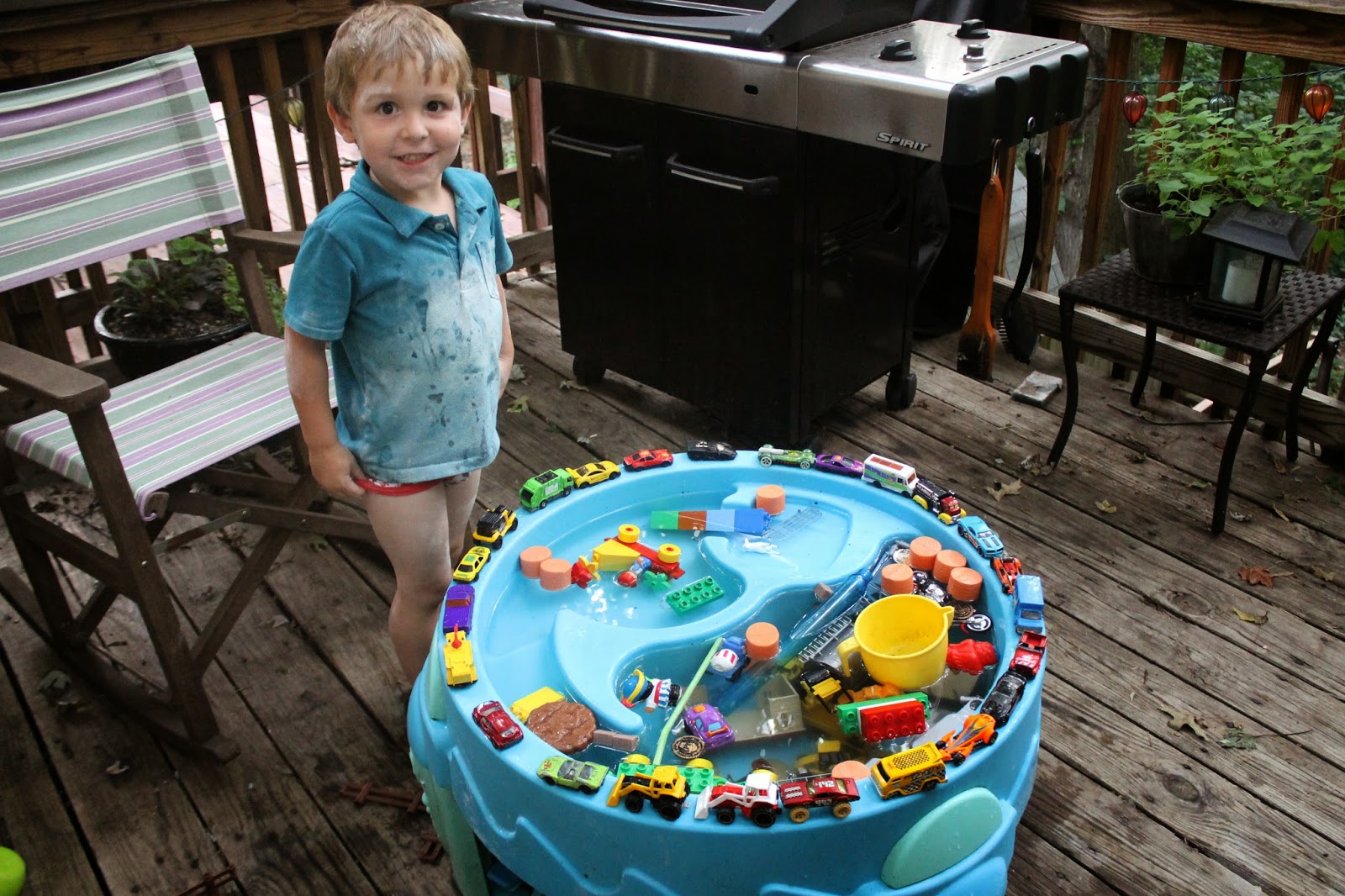 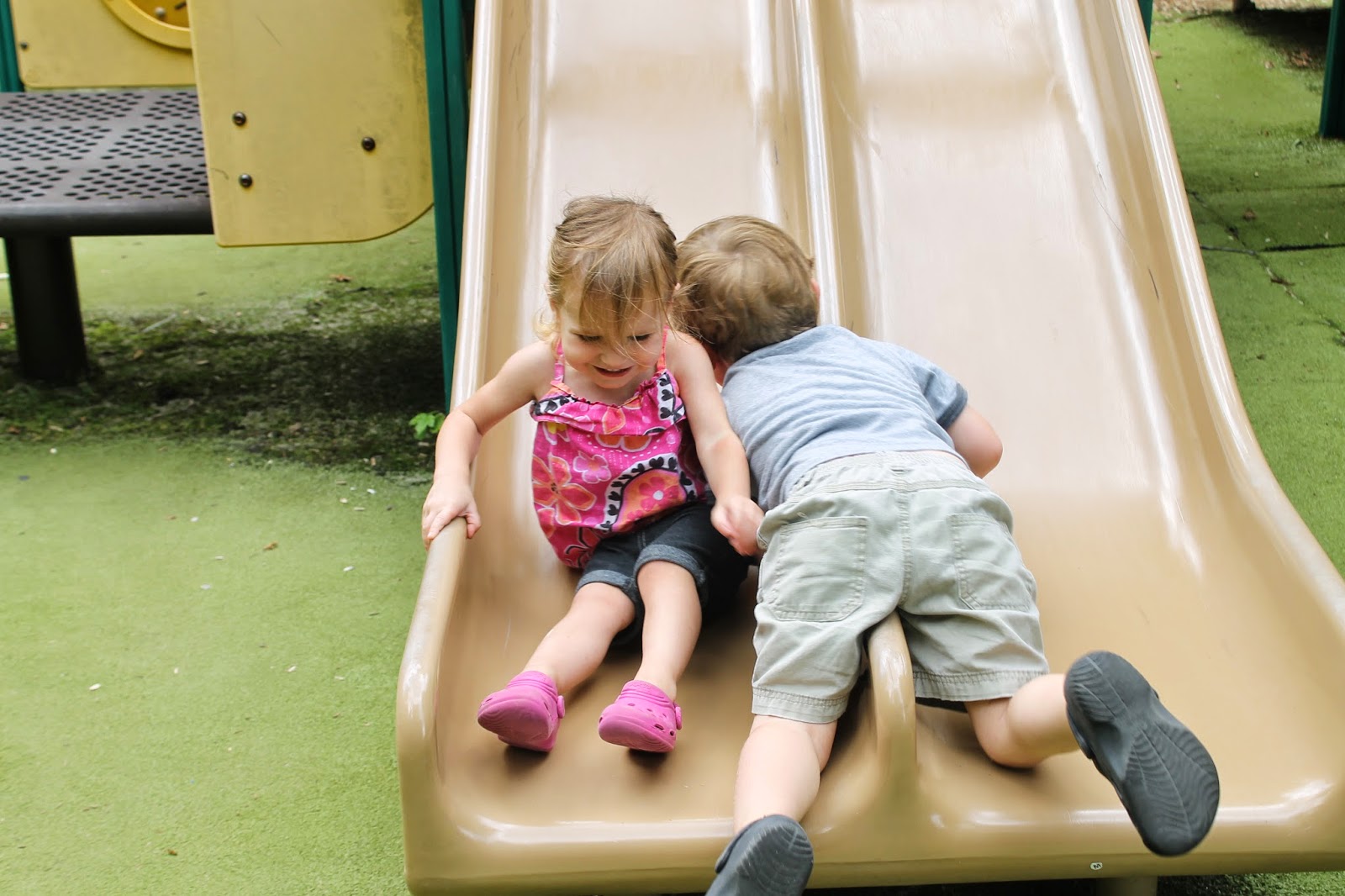 Can't even have half a slide to herself! 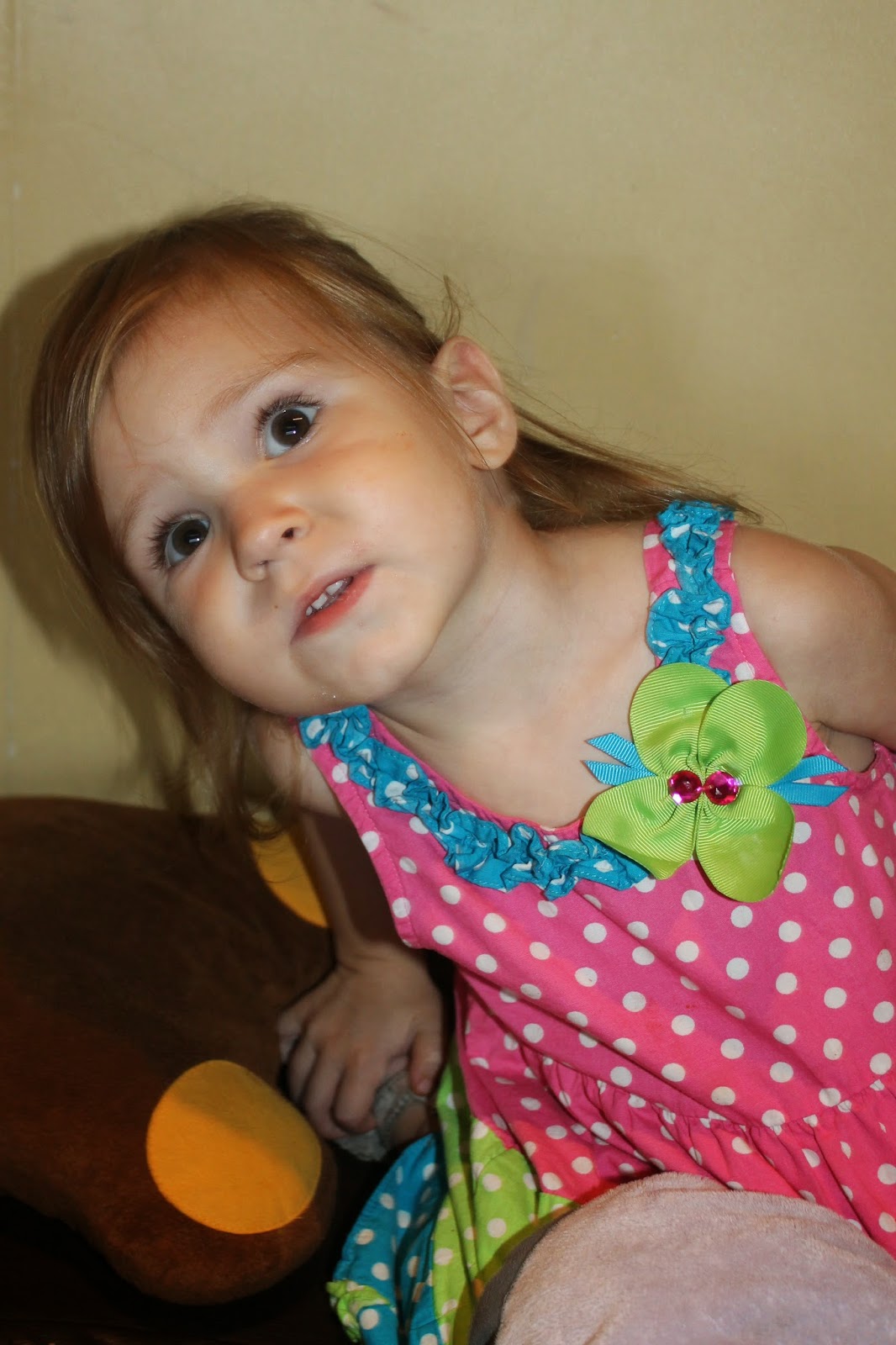 We really had a golden summer. We hit it off with our neighbors and spent most every day going to different activities together and running back and forth across the street to each other's houses. After years of Philip grudgingly going to the activities I had planned, he was now running out the door to do them with his best buddies. It was hard to see this summer come to an end, knowing that with preschool starting, things were going to change a lot. But we have found our new groove and have lots more to share about the joy of September! 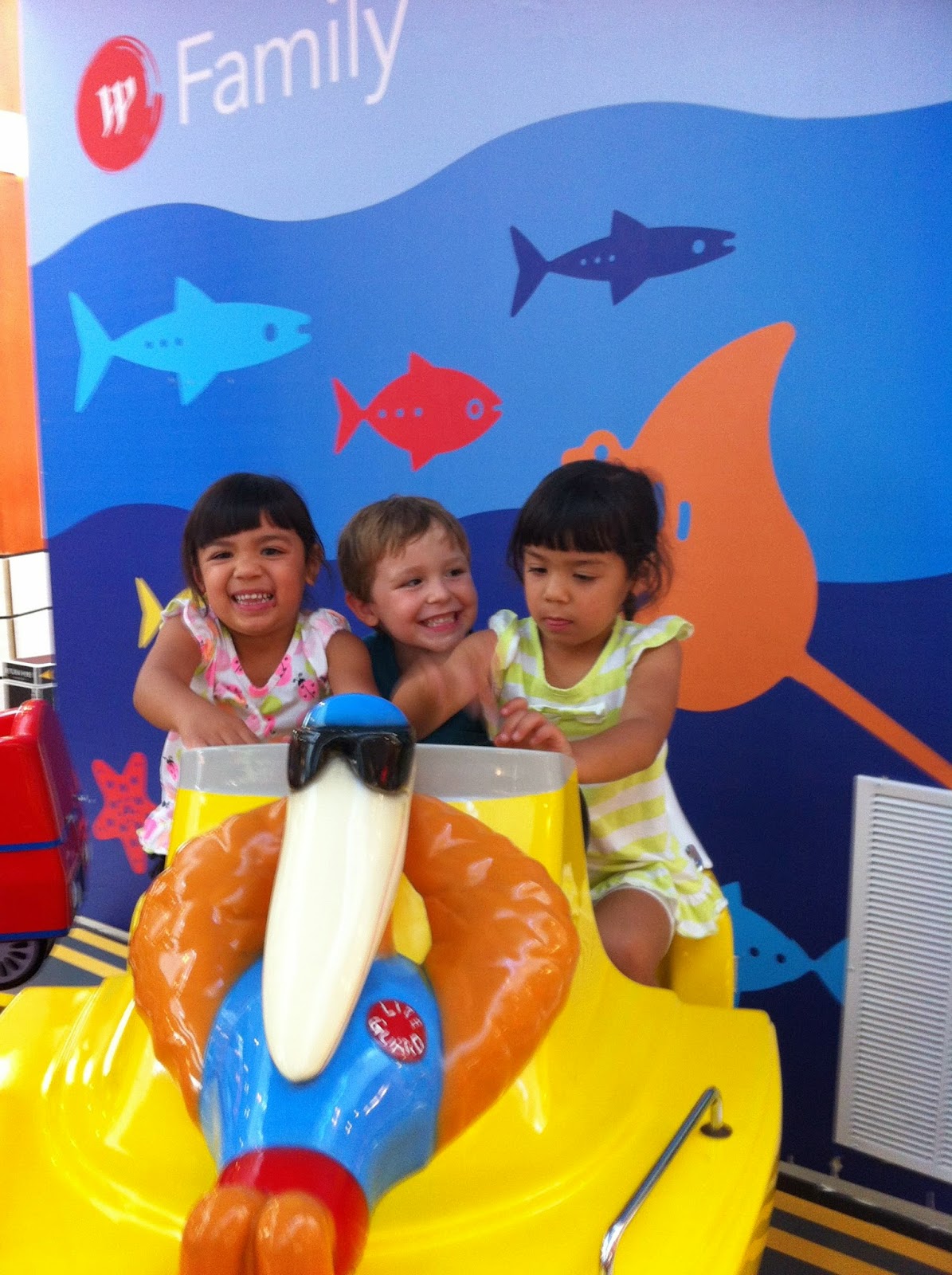